Every offseason, from January to August, I get inundated with various questions relating to your keeper fantasy football league.

Almost every time I’m asked, regardless of specific details or league setup, I answer the same.

“When it’s time to make that decision, look at ADP, and keep the player(s) who rank highest, thus giving you the best value.”

Let’s walk through some examples to show you what I mean.

“I need to keep two of these players: Austin Ekeler, Travis Kelce, J.K. Dobbins, Julio Jones, and Chris Godwin. Keeping two players is mandatory, everyone keeps two players, and we (essentially) all lose our first- and second-round picks by keeping them. We’re only keeping these players for this year.”

This one’s easy. By both current ADP and our projections, Kelce and Ekeler rank highest, so they should be your two keepers.

I typically lean toward prioritizing ADP over my rankings, except in a few specific instances. For instance, if you’re stuck between keeping Austin Ekeler and Cam Akers, I’d urge you to keep Akers. They’re neck-and-neck in ADP, with Ekeler slightly higher, but Akers is much higher in our projections. If your choice is between CeeDee Lamb and Brandon Aiyuk, I’d probably lean Lamb (if you liked both), though we have Aiyuk higher in our projections. Lamb has an ADP of 3.10 while Aiyuk has an ADP of 6.02. If you kept Aiyuk, you’d have to spend (at best) a fourth-round pick on Lamb. If you kept Lamb, you could still take Aiyuk in the fifth or sixth round, returning a value of two or three rounds to your team.

“I need to keep two of these players: Travis Kelce (Round 2), Tom Brady (Round 9), Jerry Jeudy (Round 13), Justin Jefferson (Round 14), and Brandon Aiyuk (Round 15). The round I took them in last year is the round I get to keep them in this year.”

Okay, so, to answer this, we’ll need to take a look at current ADP. Here’s what we have:

When looking at the question this way, it seems obvious who to keep – Aiyuk and Jefferson, both returning the best value to your team.

However, Kelce’s ADP makes this solution at least a little less straightforward, though I think my answer is still the same. The value of keeping a Round 1 player in Round 2 results in a one-round differential, but that differential might still be more valuable than a multi-round differential later in the draft. Round 1 draft picks have a much higher expected return than players being drafted later on. Kelce is currently being drafted, typically, as the seventh player off the board. If you’re going to be drafting 12th, that’s not such a good value (taking him 13th). However, if you have the first pick in the draft, you’d be taking him with the No. 24-overall pick, returning 17 picks of value in the premium rounds of your draft. You can then (assuming you also keep Jefferson), draft Aiyuk in Round 7 if you were really sold on him. So, the difference these two options could be something like:

Still, I’d much prefer the latter option, but this is a good way to visualize such a decision.

“I’m in an auction ($200 budget) keeper league. I have the option of keeping up to four players at the price I paid for them. I can either keep them at that price for exactly three years, or keep them with an annual $10 escalator, which then gives me the option to keep them (or not) at the end of each year. Here are my options: Tyreek Hill ($44), Derrick Henry ($36), Justin Jefferson ($5), Brandon Aiyuk ($2), Antonio Gibson ($1), and Zack Moss ($1).”

Okay, so this one’s a bit more complicated, but our process will be the same. Using auction ADP, let’s try to spot his best values. Here it is, sorted by return on investment: 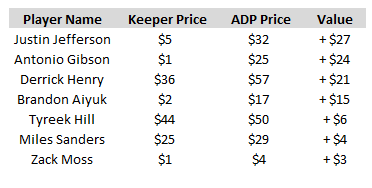 I think Jefferson, Gibson, Henry, and Aiyuk are the obvious must-keeps from this list. I think this value is good enough to keep all four players at the price you paid for them and worth the risk of having to keep them for three years without an out.

Certainly, there is some risk here. What if Henry suffers a debilitating injury or starts to decline, entering his age 27 season? If it was a $5 escalator (instead of $10), my answer might be different. Perhaps then it’d be worth paying for the insurance, but I’m willing to gamble at this price tag.

Further, if you only had to pay, let’s say $35, for Hill, perhaps then he might be worthy of keeping — like in snake drafts, premium players have added value as keepers. Remember, if your leaguemates are all keeping up to four players, high-end talents are going to be harder to come by.

So, your next question should be, how does this influence your draft strategy? If we’re keeping all four players without an out for the next three seasons, that does pigeonhole us quite a bit. If we buy a player for $1 next year and he’s worth $30 the following season, we wouldn’t be able to keep him. That’s another argument against my recommendation, though, again, I think it’s worth the risk.

By keeping Jefferson, Gibson, Henry, and Aiyuk, we’re spending only $44 to lock up a WR1, a RB1, a RB2, and a WR2. That leaves us with roughly $156 to spend elsewhere. Looking at ADP, ideally, you should be able to afford something like one top-six wide receiver, one top-six running back, a top-3 TE, and a top-6 QB. You shouldn’t be trying to draft potential keepers and you shouldn’t be wasting your time with low-dollar dart throws, and you should be playing to win-now. And, if these are your keepers, you should be the heavy favorite to win your league this year.