For fantasy purposes, it’s better to have players in games that feature teams that play fast and run a lot of plays. Why? Faster paced offenses drain less clock in between plays which gives the game more volume. And more volume = more opportunities.

In this weekly column, I’ll highlight a few games that project for more pace and plays and some spots that could underwhelm.

Note: All pace/play stats are from RotoViz and cover the last eight weeks (Week 6-13).

Coming off one of the most embarrassing losses in recent years, the Chargers find themselves in a perfect bounceback spot against the Falcons this week. Atlanta’s defense may not be as terrible as it was to start this season, but it’s still not like they’ve turned into some juggernaut. Over the last eight weeks, opposing offenses have still elected to throw 62% of the time against the Falcons (fifth-highest rate) and averaged 7.6 yards per attempt (fifth-most) on their passes. Plus, it’s also not like they’ve faced any great quarterbacks as of late. Teddy Bridgewater got hurt mid-game against the Falcons in Week 8, Drew Lock ended up with 29.2 fantasy points in Week 9, Derek Carr fell apart in Week 11, but Taysom Hill threw for a combined 460 yards through the air in two of their last three games. I’m fully expecting that Justin Herbert will attack the Falcons downfield. This game has massive shootout appeal if the Chargers offense shows up because their defense has been absolutely horrendous. The Chargers have now given up at least 27 points in nine-straight games. Sure, L.A. has lost some key defensive players to injury. But so has every other team. Which leads me to this question: What exactly does Anthony Lynn do?

Even with the return of James Conner (off of the COVID list), the Steelers aren’t going to go away from throwing the ball all over the place. Short throws to Diontae Johnson, JuJu Smith-Schuster, and Eric Ebron essentially is their run game right now. And against this electric Bills offense, the Steelers are going to have to throw to keep up. How crazy is this? Over the last four weeks, Ben Roethlisberger has thrown the ball 196 times. 196! Meanwhile, if Patrick Mahomes and Aaron Rodgers weren’t playing out of their minds, Josh Allen would legitimately be in the conversation for MVP. The Bills have given the keys to the offense to Allen and, over their last four games, the Bills are 65% pass-heavy when the game is within a score. That ranks third behind only the Steelers (71%) and Buccaneers (67%). If this game stays tight throughout like Vegas expects — the Bills are just 2.5-point favorites — we’ll see plenty of passing from both of these fast-paced offenses.

I’m a little bit surprised that Vegas is so low on this game. The over/under is set at 45, despite the fact that both of these offenses are above-average in pace and fairly pass-heavy. Over the last eight weeks, Chicago is top-7 in pass rate when trailing (72%) and when leading (57%) while Deshaun Watson is the Texans entire offense. Houston has struggled to run the ball all year and they’ve gotten even further away from the run game since firing Bill O’Brien. Since Week 5, the Texans have gone 62% pass-heavy when the game is within a score — which is actually tied with the Bears for the fifth-highest rate. Chicago’s defense is stout, but probably slightly overrated as they’ve given up at least 24 points in five of their last six games which includes the 31 spot they gave up to the left for dead Lions last week. This might be a good week to catch Deshaun Watson and Brandin Cooks at lower than normal ownership levels in DFS while Allen Robinson is obviously a tremendous play against a Bradley Roby-less Texans secondary that was just set on fire by T.Y. Hilton (8/110/1).

The Vikings may be relatively slow-paced, but that hasn’t stopped them from playing in shootouts. Last week marked the 10th time they’ve been in a game that has combined for at least 50 points this season. What’s more, the Vikings have now scored 28 or more points five times in their last six contests as Justin Jefferson continues his ascension into superstardom. Dalvin Cook and the run game is still the focal point of this offense, but the Vikings have really started to increase their passing in recent weeks. And with how well Jefferson and Adam Thielen are playing, why wouldn’t they? Kirk Cousins has attempted 30 or more passes in now four-straight games after meeting that mark just twice in his previous eight contests. In fact, the Vikings were the most run-heavy team in the league in neutral situations (score in between 7 points) in Week 1-9 (57% rush rate), but that has since dipped to 47% over their last four outings. The league-average run rate in neutral situations is 45%. On this much more balanced attack, Cousins has quietly been stellar for fantasy over the last month and has ripped off weekly finishes of QB11 > QB5 > QB4 > QB11. Combined with this fast-paced, pass-heavy Buccaneers offense that will surely look to exploit the Vikings young cornerbacks — this game is ripe for scoring. Vegas rightfully has this game tabbed with an over/under at 51.5 points, third-highest on the slate.

After laying an egg at home against the Giants, it would be one of the most hilarious upsets in NFL history if Seattle falls to the New York Fightin’ Gases this week. Vegas has the Seahawks set as 14-point favorites, and if we guarantee that they play up to their potential, the real line should be like -24. The biggest question in this game is simple: How long will the Seahawks allow the Jets to hang around? Russell Wilson is going to be able to do whatever he wants against this secondary, but volume is a big concern here. Both of these teams play extremely slow on offense and, for whatever reason, Seattle has started to go away from letting Russ cook. In their first six games, Seattle was 61% pass-heavy on first and second downs when the game was within a score. That was the second-highest rate in the league. Over their last six, the Seahawks are just 54% pass-heavy on early downs in neutral situations, which ranks 14th.

This one is simple. We’ve got two slow-paced, run first teams squaring off in a key divisional battle with Baltimore trying to stay alive in the AFC playoff picture. Meanwhile, Cleveland is cruising towards the postseason and can virtually lock down a spot with a win. We’ll see both sides try to impose their will and establish the run this week as the Ravens (59%) and Browns (55%) are the NFL’s first- and second-ranked teams in rush rate when the game is within a score (over the last eight weeks). Unless one team mounts a big lead and forces the other team to air it out to keep up, don’t expect Lamar Jackson or Baker Mayfield to throw much on Monday Night. 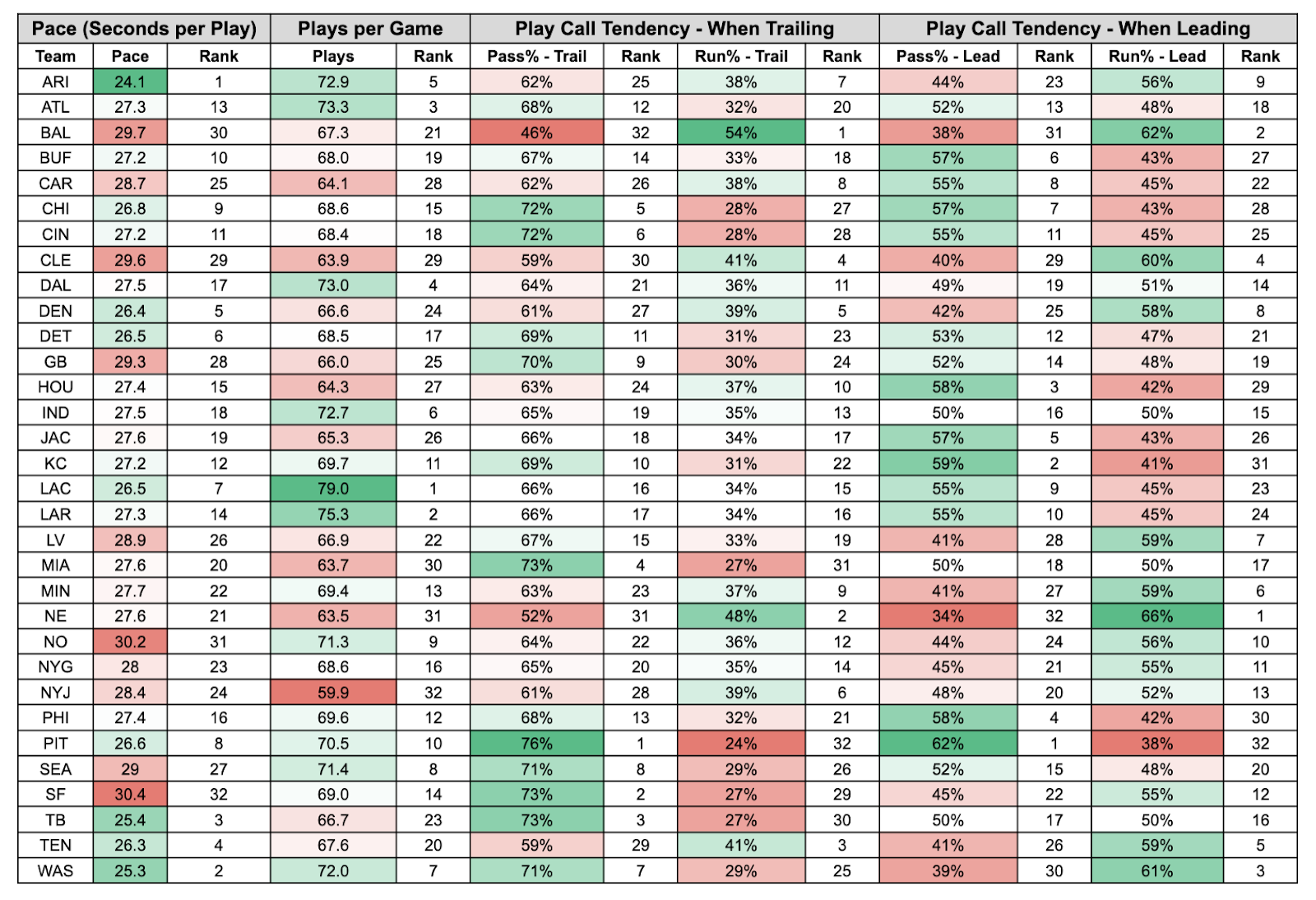