Hello, and welcome to the Week 15 XFP Report. If you’re unfamiliar with XFP, I’ll get to that in a little bit.

Through 14 weeks of action, here are the top-25 players in expected fantasy points (XFP) per game: 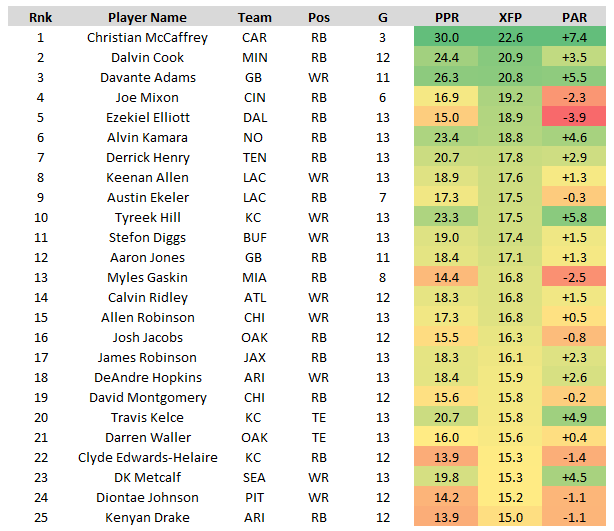 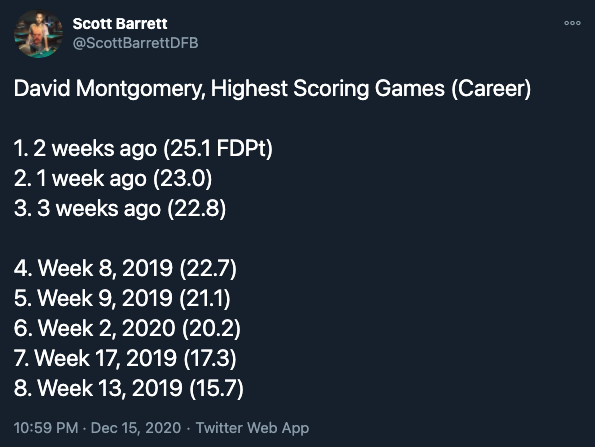 What’s the cause of Montgomery’s recent upsurge in production? Is he finally just hitting the regression we’ve long awaited? Does it have something to do with Bill Lazor being anointed as the team’s offensive play-caller immediately prior to this 3-game hot stretch? Or was it Cody Whitehair moving from C to LG right before this streak? Or was it entirely due to Montgomery’s schedule?

Probably all of the above, but mostly the latter. By my data, Montgomery’s last 3 opponents were worth a boost about 6.1 FPG over his expectation. His strength of schedule across his first 9 games was worth -2.6 FPG. Montgomery averaged 12.3 FPG across his first 9 games, and 25.6 since (difference of 13.3 FPG). So, again, probably mostly the matchup but there are other factors at play here.

Akers was one of my must-draft targets for a large bulk of the offseason. And it’s been quite the rollercoaster ride. He earned 15 touches and the start in Week 1. Things were looking good. He earned the start again in Week 2, but suffered a serious multi-week rib injury immediately after seeing the first 3 RB touches of the game. He struggled to see the field after that, but burst back onto our radar in Week 12, turning just 9 carries into 84 yards and a score.

So, what’s going on? Is he who we drafted him to be – the rightful heir to Todd Gurley, beasting in a bell bow workload when it matters most (during the fantasy playoffs). I don’t know for sure. Sean McVay’s quotes were pretty discouraging at the end of last week’s game. But the good and bad news is we’ve learned by now we can never trust him. And, luckily, Akers’ Week 15 matchup has made things easy on us. The Rams are favored by 17.0-points against the Jets. So, there’s no way you can bench him in the spot. I have him ranked as a borderline-RB1 this week.

The Cam Akers-rollercoaster ride is like Disney’s Mad Tea Party in comparison to Jonathan Taylor’s Kingda Ka. Throughout the offseason, Taylor was always a little too expensive for my liking, likely to be stuck in a 3-way committee with Marlon Mack and Nyheim Hines for the near-entirety of the season. But then Marlon Mack suffered a season-ending injury in Week 1. Taylor earned a bell cow workload in Week 2 (76% of the backfield XFP) and was productive with that good volume, scoring 19.0 fantasy points. I quickly anointed him a league-winner. What happened next? From Weeks 3-10, Taylor averaged just 10.6 XFP and 10.6 FPG. He hit a high of only 11.7 XFP over those 7 games, earning just 38% of the XFP out of the backfield. However, over the last 3 weeks, Taylor is averaging 18.3 carries, 3.0 targets, 6.02 YPC, 138.0 YFS, and 22.8 FPG.

What’s going on? Which take is right? Might he still prove to be a league-winner down the stretch when it matters most? I don’t know, but I’m not as optimistic as I am with Akers. Akers has clearly seen bell cow usage over the last few weeks, but Taylor quite clearly has not. Instead, he’s merely been productive and efficient in spite of it. Taylor played on just 56% of the snaps last week (and just 49% in Week 13), well off of his Week 2 high (67%). He earned just 48% of the backfield XFP last week (and just 44% in Week 13), again well off of his Week 2 high (76%). Keep in mind, this was a game well suited to Taylor’s strengths – Indianapolis led throughout and won 44-27. Taylor has also benefited from an extremely soft schedule over this stretch – actually the position’s softest schedule over this stretch, worth a boost of 6.0 FPG to Indianapolis’ RBs.

Could the coaching staff reward Taylor and gift him a bell cow workload down the stretch? Absolutely. But I’m still wary. Luckily, like with Akers, it doesn’t really matter. You’re starting Taylor with confidence as a mid-range RB1 this week. The Colts are favored by 7.5-points against a Houston defense that ranks worst in FPG allowed (31.6), worst in rushing FPG allowed (21.2) and worst in YPC allowed (5.38) to opposing RBs.

Last week Deebo Samuel played on just 1 snap before succumbing to injury, and Aiyuk clearly benefited from his absence. He ranked 2nd among all players in XFP, totaling 25.2 on 16 targets. And he was productive with that volume, scoring 24.9 DK FP. We wrote him up as a borderline must-play for DFS, so maybe this shouldn’t have been a surprise. Here are some crazy stats (now updated) that led up to that call:

Aiyuk has long been dominating Jefferson in volume (by XFP). And Since Week 3, he’s been returning 92% of Jefferson’s production (by FPG). Since Week 7, 124%. And yet, he’s just 86% of Jefferson’s salary on DraftKings this week, priced as only the 17th-most expensive WR on the slate. Again, even though he ranks top-3 in volume and production over the last 8 weeks of the season.

We’ve long been viewing Jefferson as one of the best picks you could have made in the offseason. And as one of the most exciting and electric rookie WRs in some time. But we haven’t been doing that with Aiyuk, even though he’s been right there with him. And I don’t really know why.

Over his last 5 games, he averages 11.2 targets, 99.0 receiving yards (low of 75), and 21.7 DK FPG (low of 19.7). With WR Deebo Samuel reportedly “out a while”, and up against a Dallas defense that has given up a league-high 22 touchdowns to opposing WRs, you’re starting Aiyuk with confidence this week as a high-end WR2.

In 5 healthy starts with Justin Herbert under center, Ekeler is playing on 65% of the team’s snaps, averaging 13.0 carries, 9.8 targets, 21.8 XFP, and 21.7 FPG. For perspective, 21.8 XFP per game would rank behind only Christian McCaffrey. It’s also far better volume than Ekeler saw in games without Melvin Gordon last year (18.7), you know, when he was the only fantasy option coming anywhere near Christian McCaffrey (26.8 FPG). And it’s significantly better volume than he saw once Gordon returned (13.8), you know, when he was still putting up easy RB1 numbers (16.8 FPG). Ekeler’s 21.3 FPG average would also rank 4th-most among RBs, but if Ekeler remains as efficient as he’s always been, we should be expecting much more. He’s consistently ranked as one of the 3 most-efficient RBs in fantasy football, and ranks as the most-efficient fantasy RB since entering the league.

- Dalvin Cook was far and away the league’s most-efficient fantasy player from Weeks 1-9, outscoring his expectation by 9.6 FPG, and finishing with a PAR of +2.4 or better in all 7 games. Since then, he’s finished negative in PAR for 5 straight games, averaging 5.1 FPG less than his per-game expectation. I’m not sure when Alexander Mattison (appendectomy) is going to be back, but if it’s this week, I wouldn’t be surprised to see Cook receive a diminished workload in an effort to better preserve him down the stretch.

- I’m fairly confident TJ Hockenson is poised for a slate-busting game. Hockenson has exceeded 50 receiving yards in 8 games this year, as much as Darren Waller and George Kittle combined. He’s seeing phenomenal target-quality, earning 7 targets inside of the 5-yard-line (2nd-most among receivers). But – with Kenny Golladay out – he’s now paired that with good target-volume. Excluding Week 10 (due to injury), Hockenson has seen at least 7 targets in each of his last 6 games. He’s hit double-digit XFP in each of his last 6 games and double-digit fantasy points in each of his last 7 games. Over this span, he averages 15.1 XFP, 14.1 fantasy points, and 8.8 targets per game. Compare this to Darren Waller over the same stretch, who averages 15.0 XFP, 16.5 FPG, and 8.9 targets per game.

- Were you there for the K.J. Hamler regression game in Week 14? After spending some time hyping him up on the Saturday podcast, I ended up with zero ownership. He had come into the game as one of fantasy football’s least-efficient players, falling short of his volume-based expectation by 15.8 points. And then the regression hit in a big way – he scored 22.6 fantasy points on just a 5.8-point expectation (3 targets, 92 air yards). That one game made a big difference, bumping his PAR up from -1.8 to +0.1.

- Here’s what we said about Nelson Agholor last week: “Agholor was the league’s least-efficient player in Week 13, scoring just 7.8 fantasy points on a 21.5-point expectation (-13.7 PAR). Maybe that’s worrisome because it came against the Jets who are playing backups at all 3 CB spots. Or maybe it’s encouraging because that is good volume. He averages 15.6 XFP since Week 11, which ranks 17th-most among WRs. He continues to be too volatile to start in start/sit leagues but is someone to keep in mind for DFS tournaments.” What happened? He scored 24.0 DK FP on a 17.8-point expectation and ended up on the winning Milly Maker lineup. Since Week 11, he ranks 13th in XFP (16.1) and 22nd in FPG (15.0). Henry Ruggs will miss Thursday’s game against the Chargers. 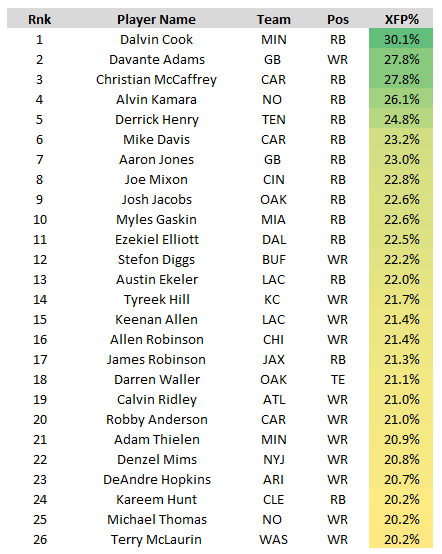