Now that's how you start a season! For months we've been dying for football and Week 1 did not disappoint! Hopefully, you guys got some wins in your season-long leagues, won some bets, and placed in the money in DFS. It was an active Sunday for me, making a few flips during the games.

Let's take a look at some guys whose cards saw nice increases due to their Week 1 performances.

Reminder: We love StarStock.com’s vault of over 100,000 cards. If you want just one resource for options, purchasing, and organization, they’re the site to check out. Images and stock prices courtesy StarStock. As a Raiders fan, there wasn't much to not like about Jacobs' performance on Sunday. Four catches for 56 yards, 25 rushes for 93 yards and 3--THREE TDs. Needless to say, with a performance like that, the market reacts. 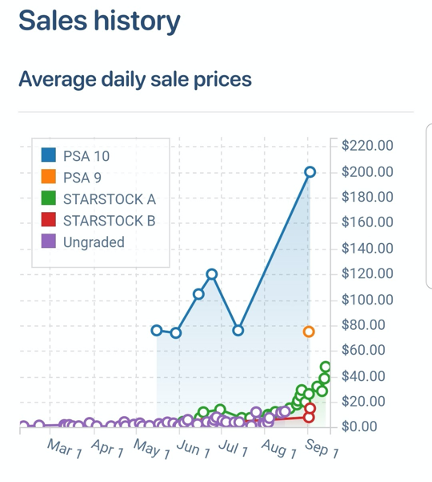 His Prizm was selling for roughly $25 at the beginning of the month. They are now selling for just about $50. 200% ROI isn't bad, but if you would have watched my video a few months ago, you'd currently have a 1000% ROI. 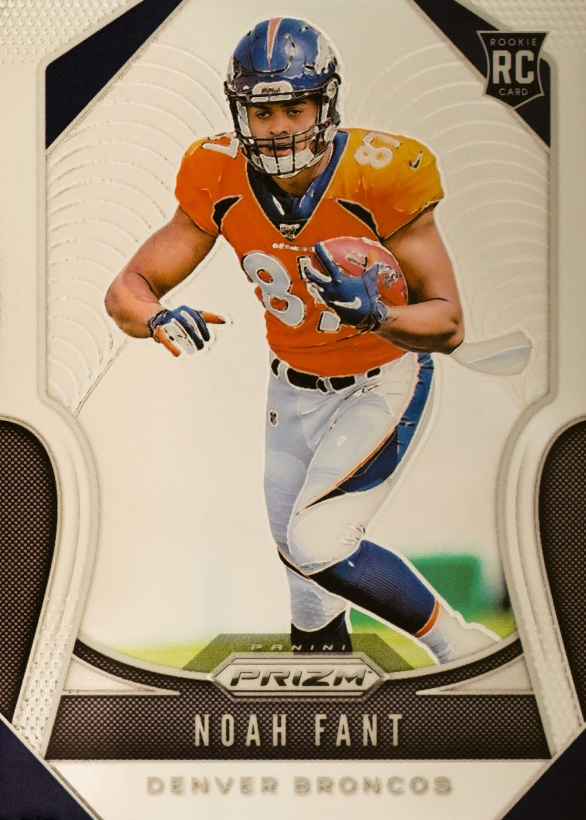 You knew one of the 2nd year TEs were going to break out, and it looks like that could be Fant. It makes sense since they have a young QB in Drew Lock. Before Sunday night, Noah Fant's Prizm was selling for around $8. Late last night/early this morning they were selling for as high as $25.300% ROI overnight isn't bad at all. 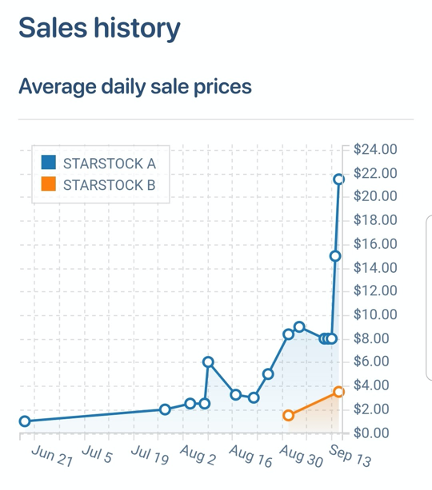 If you like Fant, I think you missed the boat on him. At least for his Prizm RC. $25 seems a little steep to me, especially after only one good early performance. If you have them, I'd personally cash out now. 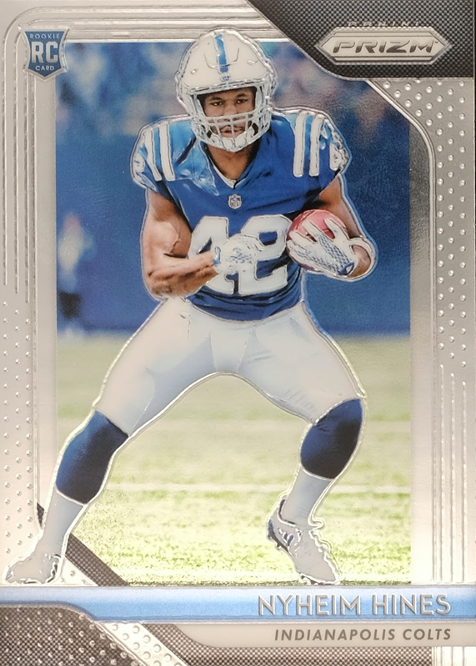 What a week for Hines. Seven carries for 28 yards and a TD, 8/45 receiving and a receiving TD. His Prizm cards were trading for $2 during the week, and yesterday they hit $10. You're not retiring if you bought one, but you certainly can't complain about a 500% increase in a few days. 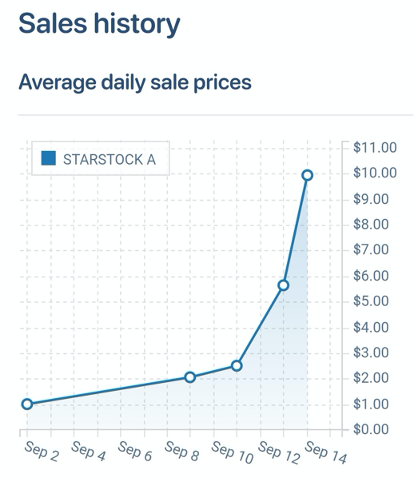 I picked up 5 of his Donruss RC's on Starstock Wednesday for $.20 each. Sold all 5 for $2.50 each. Again, not huge money, but how can you be disappointed when making a 1250% ROI? If you like Hines, I still think he's a good buy at $10 for Prizm, especially with Marlon Mack done for the season.

It's best to capitalize on players that may have missed week 1 due to injury or just a poor performance. Here are a few I think are a great buying opportunity, right now.

I definitely have a love affair with Golladay, as I think he's one of the best wide receivers in football. I watch every Lions game just to see what he's going to do next. I can assure you it's not easy watching Lions games, but he's a human highlight reel, and his cards are not valued like the elite receiver he is, I can assure you. 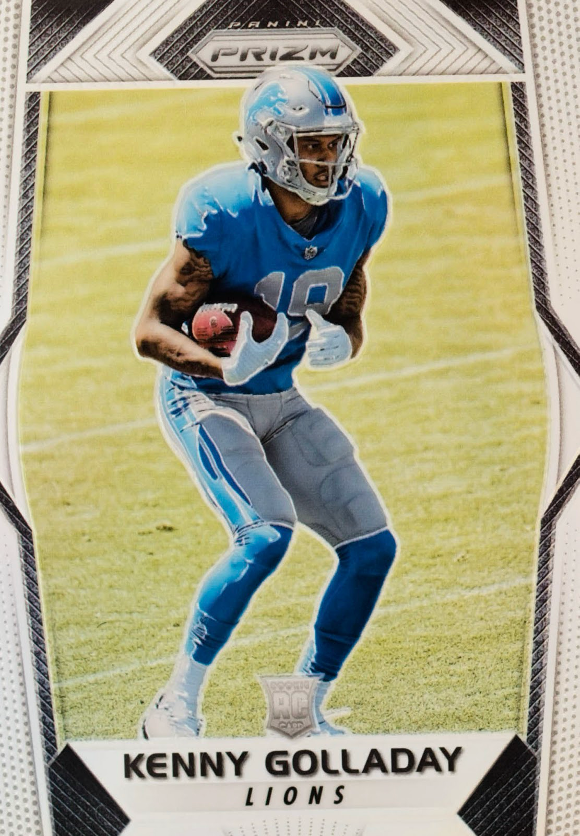 Even on Starstock you can get his 2017 Panini Prizm for under $50. I think even at that price it's well worth buying, but you can find them cheaper on other card selling platforms. If that's too much for you to gamble on, pick up his 2017 Panini Select or 2017 Panini Optic.

Despite 3 TDs in Week 1, I think that his cards are still very undervalued. Here's a factor in cards you don't get when it comes to prop betting or fantasy: Minshew has likeability. 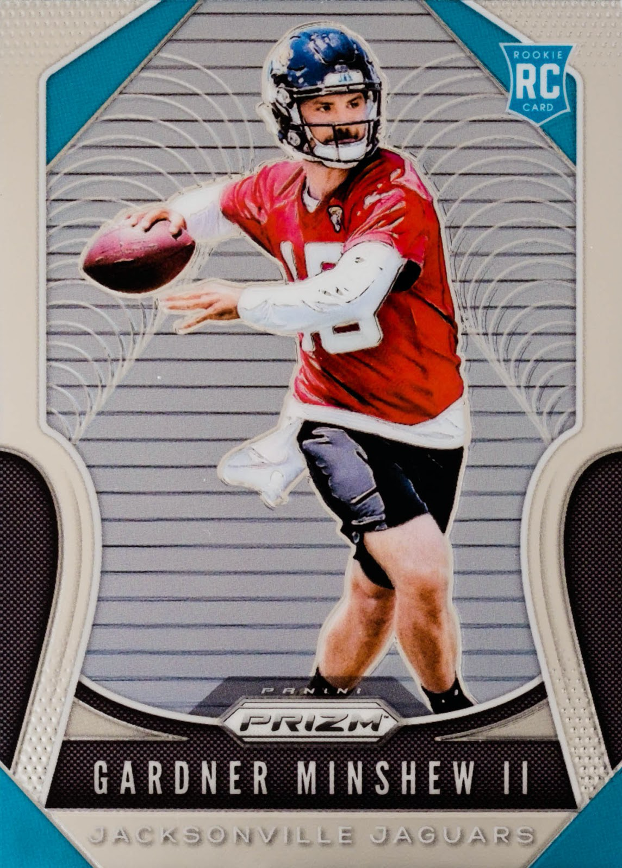 You can pick up his 2019 Panini Prizm RC for under $50. The Jaguars probably aren't going to win a ton of games, but I think he has a great shot at getting a contract from the Jags, as he's certainly their best QB since Mark Brunell. I'm buying Minshew cards whenever I can find good deals.

Maybe you want to dip your toes into cards, and don't want to spend a ton of money, these cards are for you. Most can be had for $2 Max.

People have all but forgot about him since he hasn't really played the last 2 years. His track record shows a rough injury history, but his cards can be found ultra-cheap almost everywhere.

NEW RELEASES FOR THE WEEK 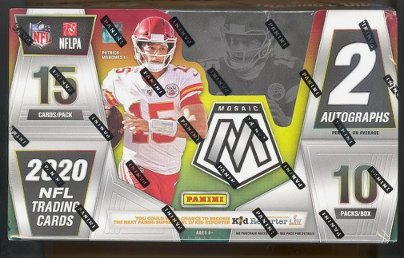 Panini Mosaic released on Friday, September 11th, and this product does not disappoint. This is the first release of Mosaic in football, as it's been an NBA product since 2016-17, However, the product got a makeover this year. Up until this year, it was called Panini Prizm Mosaic, but Panini decided to change the product up this year, dropping the Prizm in the title, and basically changed the entire look. When it was released in basketball, it took over the basketball card market. Granted, it was basically the only basketball product released for a 2 month period, because Panini was shut down due to the pandemic. I've talked about people wanting the "shiny" cards (Prizm, Optic, and Select), and Mosaic will be one of those desirable cards now as well. 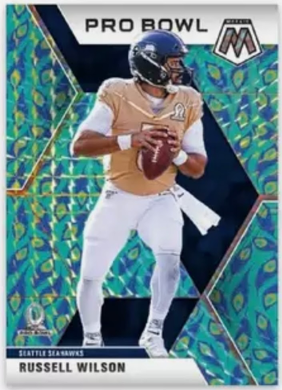 Hobby boxes are not cheap; the cheapest I've found is around $750 with shipping. You get 10 packs per box,15 cards per pack, and there are 2 autographed cards per box. I don't have the balls to gamble that much on a box, but perhaps you like to live more dangerously than me. On the plus side, they will be releasing a retail version as well, which you'll be able to find at Walmart and Target. They haven't hit shelves yet and as of now, I don't see an actual date when they will. "Blaster" boxes will be 19.99 + tax but I think they will be extremely hard to find. I estimate those will be around $75 a box on secondary.