Midway through the 2021 season, I argued that the NFL has morphed in such a way that it’s no longer a rookie fantasy mistake to take the top QB at the end of the first round. Judge it all you want but give it a read here. I wrote this midway through the 2021 season purposefully so I could use the rest of the season to test my hypothesis with some “out of sample” validation. The main takeaway after doing so is this: Josh Allen is worthy of a Round 1 selection in 2022 seasonal, single QB fantasy drafts.

Top-ADP QBs have been historically sketchy at best in terms of fantasy success, on top of the fact that supply outweighs the demand at the position. This is why every analyst everywhere has advised waiting on QB and stocking up on more “important” positions early in drafts.

One reason for this has to do with the randomness of passing touchdown rates. A top QB might consistently move the ball down the field only to lose out on touchdown points from his team punching it in the end zone on the ground. Fantasy QBs are often a victim of their own success in this way. But as many analysts have discovered in recent years, Konami QBs (often loosely defined as those scoring 20% or more of their fantasy points on rushing plays) provide more stability. The problem is, there aren’t that many who serve as solid fantasy starters. The following charts the progression of how many seasonal top-12 QBs scored at least 20% of their points on the ground: 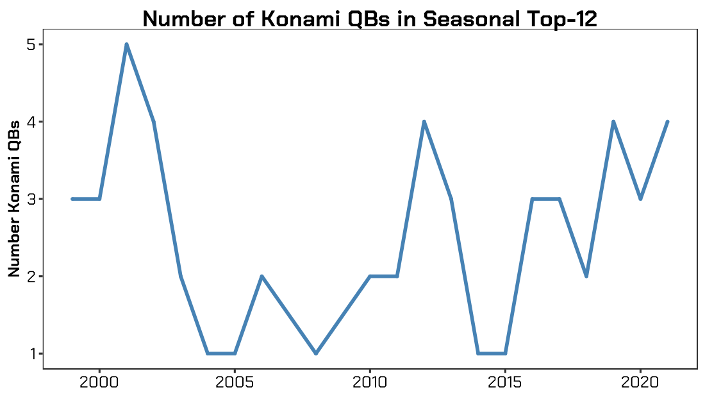 Josh Allen is undoubtedly the top asset from this list, despite trailing Jalen Hurts in Konami-ness, and I think there’s good evidence to support counting on Allen as a late-first round value in 2022. Now that’s not to say you shouldn’t try to draft him later and soak up additional value. But having a feel for where he might fall in your league is on you. That’s not what this article is about. This article is about where Allen’s valuation is. And he’s every bit worth a first-round selection.

Before focusing in on Allen, let’s step back and review how well top-ADP QBs have recently performed. In a midseason article, I covered that the top-5 ADP QBs went from complete crapshoots (slight negative correlation) to becoming the most correlated position from within the top-5 by ADP: 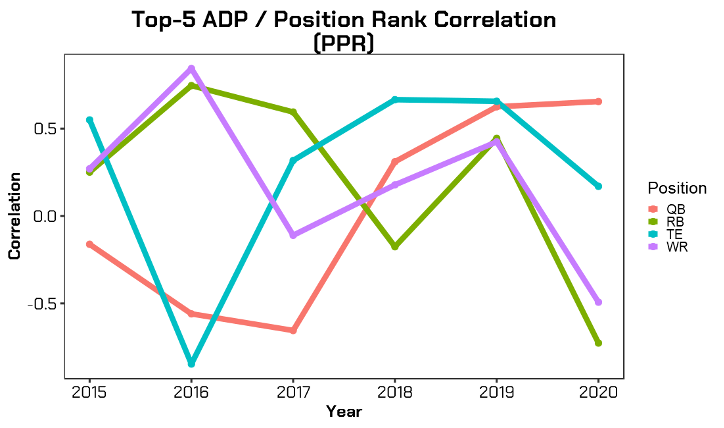 The trend above continued into 2021 at the time of my initial column’s publication. And when only considering the out-of-sample (weeks 7-17) of 2021, the top-5 drafted QBs still correlated the most out of the four major positions in terms of fantasy production.

But this comes with a caveat. There are still many QBs who outperformed those in the top-5 of ADP. This was evident in the first six weeks of the season and the story remained the same for the out-of-sample period (weeks 7-17): 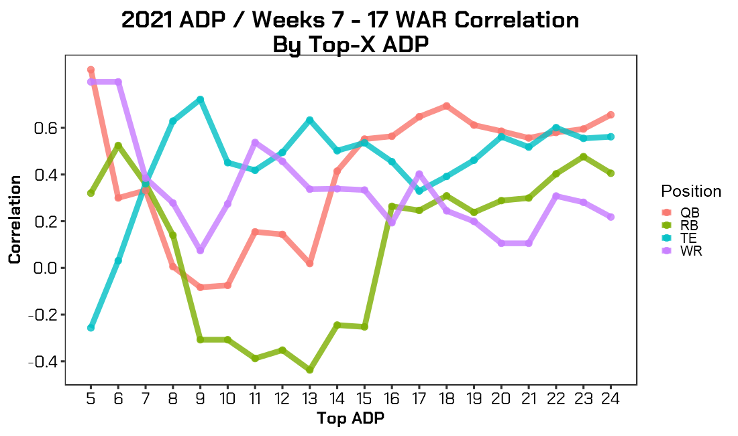 The graph below demonstrates this, as the red QB point over Top-5 in ADP is higher than any other position before declining and bottoming out when you correlate the top-10 in ADP to WAR. What this means is that QBs taken in this range (Rodgers, Prescott, Herbert, Brady, Stafford) performed better than many in the top-5 ADP.

This is a good reminder that the lottery of drafting fantasy QBs still exists. You can certainly find value in QBs later in the draft. But it’s no sure thing. And you definitely don’t want to gamble on a first-round pick, even near the turn. You need a player that has proven himself not only in production, but consistency.

I’m going to make the case that Allen is that guy. Allen finished as an overall top-12 fantasy player in each of the past two years. He was the #1 QB in 2020 and ranked #8 in WAR overall: 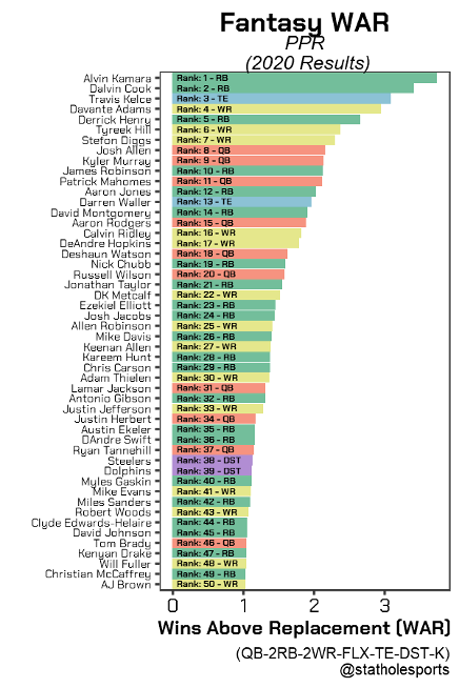 WAR evaluates a player’s production to a fantasy manager’s team by determining how many more wins any player brings to his manager than would expected from a replacement-level player at the same position. For QBs, you expect more points out of even an average performer than you would at any other position, so it takes more production for QBs to rank higher in WAR. And as you can see above, in 2020, Allen provided more expected wins to fantasy teams than all but three RBs, three WRs, and Travis Kelce.

But again, no one has ever said QBs can’t be valuable. The question is if they can be this valuable consistently. Allen maintained his level of production in the first six weeks of 2021 with an overall WAR of #7 – at the time I published that top-ADP QBs will be worth a first-round pick. 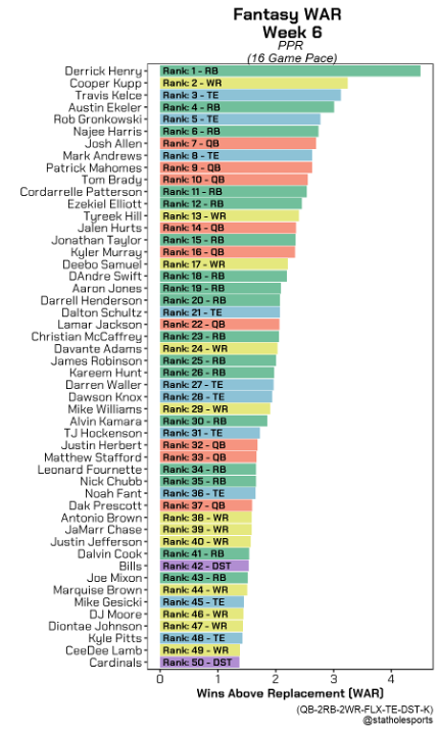 Then came the out-of-sample validation. Leaving Weeks 1-6 aside and running WAR solely on all players from the rest of the fantasy season (weeks 7-17) was the real test. Could Josh Allen maintain that level of production for fantasy teams when starting from scratch for the rest of the season? The answer was a resounding “yes” (overall rank #9): 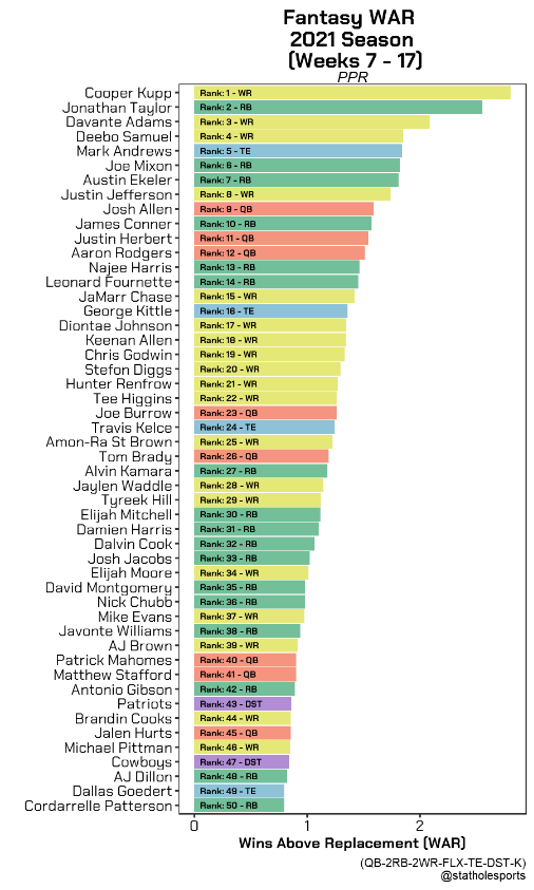 Take a moment to remind yourself that this doesn’t include Allen’s historic postseason in which he played the most efficient first two games of any playoffs for a QB in at least the last 23 years.

The following shows no QB has brought more expected points added (EPA) in his first two games of any playoffs than Josh Allen since at least 1999: 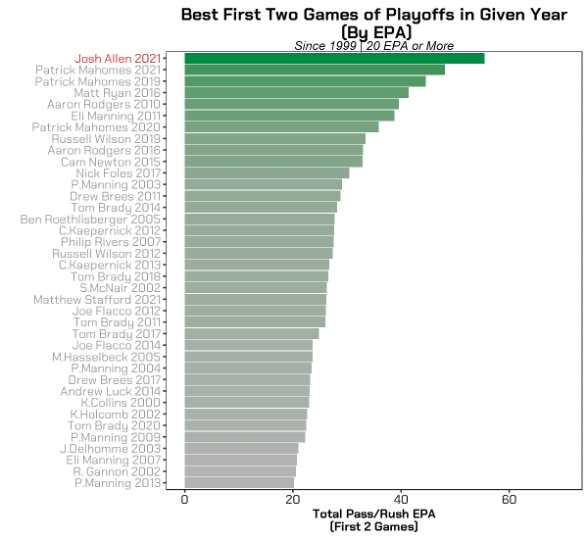 What makes me so sure Allen can remain this consistent in fantasy football? It’s not just the fact that it’s rare for a fantasy QB to repeat as the #1 at the position. It’s the fact that he’s not only one of the top passing talents in the league, but his Konami usage has been consistently above the 20% threshold in each of the last three years:

He’s the LaDainian Tomlinson, Todd Gurley, or Christian McCaffrey of the QB position. A complete dual threat in passing and rushing as the RB greats were in rushing and receiving. Not even 2021 #1 ADP Patrick Mahomes offers this level of Konami:

For the record, Josh Allen ended 2021 in its entirety as the 7th best fantasy asset overall – worthy of a mid first-round pick.

Look, there’s never a sure thing in fantasy football. That goes for any position and any player. And while Josh Allen is in a QB tier by himself for 2022, you still might consider other options that might present a better value. Just don’t expect Allen-type upside. If you have a pick near the turn, I think you can do a lot worse with that early second-round pick. If you don’t strike then, he’ll likely be gone by the back end of Round 3. Again, know your league and act accordingly as far as when you think you can get away with taking him.

Contingency Planning: What if I miss out on Josh Allen?

The next guy worth betting on, in my opinion, is Justin Herbert. His career rushing percentage (15.5% in 2020 and 13.6% in 2021) both best Mahomes’ top year and he’s even more accurate of a passer than Allen is. And all the measurables give reason to believe he has potential for more Konami-ness:

Is a super freaky athlete pic.twitter.com/sdjcCQ4SdY

The only thing really separating Allen from Herbert is that Allen doesn’t have a guy like Austin Ekeler to worry about. While Herbert’s numbers don’t qualify him at the arbitrary definition of Konami, given his elite passing ability, and breakout Konami measurables, this is enough to make a legitimate push for the #1 spot at QB. While worthy of a first-round pick from Weeks 7-17 as the new Chargers offense hit its stride, I think taking Herbert in late Round 3 or Round 4 is totally worth the untapped potential.

Then there’s Mahomes, Kyler Murray, Lamar Jackson, and Jalen Hurts. Mahomes is next up for me as he has proved consistent production with a Konami-lite 10% plus rushing points to add to his otherworldly passing skill. This has netted him overall WAR finishes of #17 and #11 in the past two years despite going through the worst slump of his career in 2021. There’s nothing wrong with looking his way at the end of Round 2. Like Allen, he has been as consistent as anyone in the past couple of years.

There’s no reason Jackson and Murray won’t bounce back either after a tough 2021. As for Hurts, I think we’ve seen his ceiling. He’s worthy of a consistent top-5 fantasy performer, but I’d be surprised if he is ever in the running for #1 QB overall. His ridiculous 43.7% Konami score is probably too high to be desirable and indicative of a lower ceiling in the passing game. Still, he finished 2021 as a late second-round value, so wherever he goes it’s likely to be a heck of a deal. Of course, all of this presumes no off-season moves by the Eagles front office.

I know this is not what you’re used to reading out of QB draft valuation takes. But thanks to the Konami factor, now we are seeing more consistency out of the top drafted players at the QB position. While this might seem like just another hot take, it’s rooted in cutting edge data capable of hindsight player draft valuations: WAR. Top-performing QBs have consistently yielded Round 1 worthy draft selections. They weren’t worth taking this high in years past due to the year-over-year unreliability. But that was then, and this is now.

And no QB has proven himself to be a scarce enough resource to take in the back-end of the first round like Josh Allen. Steal him in late Round 2 or early Round 3. Let everyone else laugh at you on draft day. Just be ready to gloat when you win the championship.