If you collected cards in the 80s, 90s, or 00s, you'll remember there were multiple manufacturers making cards. Topps, Upper Deck, Bowman, Pro Set, Playoff, Action Packed, Donruss, Score, Leaf, and Panini all produced NFL cards at one point or another. But in 2016 something unprecedented in the football card hobby happened: Panini signed an exclusive contract with the NFL to be the only manufacturer to produce football cards with NFL logos on them.

In the decades before 2000, Panini was the company that produced sticker books for Sports and Entertainment. But in 2009 Panini acquired the Donruss/Playoff brand and put their cap in the Trading Card world. A lot of people in the hobby were skeptical about what a company, who had only produced stickers up until that point could add to the hobby. They would soon find out.

Up until Topps lost its license with the NFL after the 2015 season, Topps Chrome was the most sought after Rookie Card for most players. Since Topps Chrome's initial release in 1996, collectors gravitated to that chromium technology finish. For 20 years, "Chrome was King." And despite the moratorium of NFL cards from Topps, popular Chrome cards still continue to circulate, including a Teddy Bridgewater Orange Refractor, now gaining traction with Bridgewater as the starting QB for Carolina.

Panini struggled to find its place in the hobby for the first few years. They continued to produce Contenders, a set made popular by Playoff, but they didn't have a set with that chromium technology to compete with Topps Chrome. Then, in 2012, they finally released that product, with Panini Prizm. It didn't come out as a hot new product by any means, and the design was average at best. But as the years went on and the designs improved, it started gaining popularity. 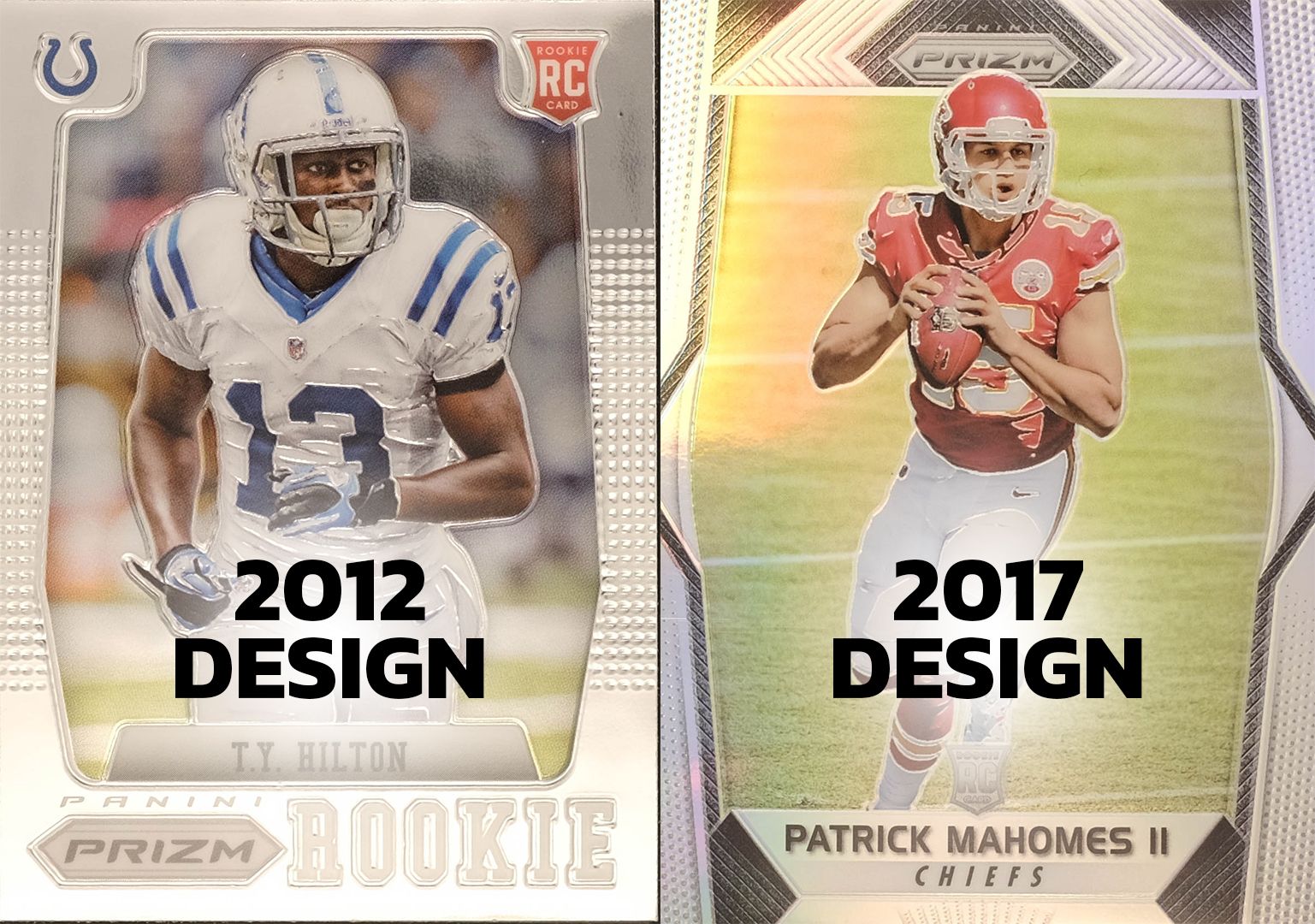 Prizm didn't instantly compete. In fact, Topps Chrome stayed the more popular brand until 2015. But when Topps was gone, Prizm was the only way for hobby enthusiasts to get that shiny fix. And every year since, Prizm has gained more and more popularity. At this point the Prizm cards that were Produced the same year as Topps Chrome, now outsell the Topps Chrome. For example, a 2012 Panini Prizm Box can go for upwards of $4,000 today.

In 2015, Panini signed a deal with NCAA allowing them to produce cards of players in College uniforms before they're signed to an NFL contract. They cashed in on the popularity of Prizm and started making a second set, Prizm Collegiate. While it's cool to be able to have a card of a player when they're first drafted, these cards are not something to be bought as an investment. They're not worthless, but they become worth less once the NFL Prizm comes out. Right now a Joe Burrow 2020 Prizm Collegiate is selling for $30‐40; when the NFL version comes out, that card will likely be worth a fraction of the current value. If you happen to have a 2020 Prizm Collegiate sitting on your shelf, it’s recommended to try and sell before the value decreases.

When buying cards as an investment, Prizm is one of, if not the best sets to buy for Rookie Cards, as they are the most "liquid" cards. When you decide it's time to "cash out" on a player, you will find it's easiest to move Prizm Rookie Cards.

There was at least a year period where you could have picked up Prizm Rookie Cards of Russell Wilson (2012), Patrick Mahomes (2017), and Lamar Jackson (2018) for under $10 each. Russell Wilson now sells for around $500, Patrick Mahomes sell for around $1200, and Lamar Jackson's sell for around $350. And it's not just QB's that are seeing big gains. Christian McCaffrey and Michael Thomas have seen 25x+ gains since coming into the league. Chris Godwin was a guy you whose 2017 Prizm Rookie cards you could have bought for under $1. Now they're selling for over $50.

Panini releases Prizm both in Retail and Hobby form. You can scour StarStock’s extensive card vault for almost any Panini Prizm desired. This year's Prizm will be released fairly soon, and when it is, you need to buy all you see at retail. You don't even have to open it. I think once retail Prizm hits the secondary market this year, a $20 "Blaster box" will sell for $100. Once a release date is announced I will let you guys know.

This draft class is loaded with QBs with potential. While most aren't going to give your fantasy team any help this year, however, maybe you can prospect on a QB for the future. That's exactly what Patrick Mahomes and Lamar Jackson once were.