Today I'm going to show you 5 Running Back cards that I think have plenty of room to grow, and detail why I think that. Some will have faster growth than others. As you're well aware, running back's often get hurt. You want to strike while the iron is hot. If a player you have, has a big game and prices spike, it's usually best to at least hedge your bets. If you bought a few, sell enough to pay for your total investment, and sit on the rest. It can all go sour rather quick, see Todd Gurley.

All 5 cards are going to be Rookie Cards, some are signed, and some have a piece of a Player Worn Jersey. If you're looking to dip your toes into the card market, picking up one of these 5 would be a great place to start. There is something for every budget on this list.

Reminder: We love StarStock.com’s vault of over 100,000 cards. If you want just one resource for options, purchasing, and organization, they’re the site to check out. 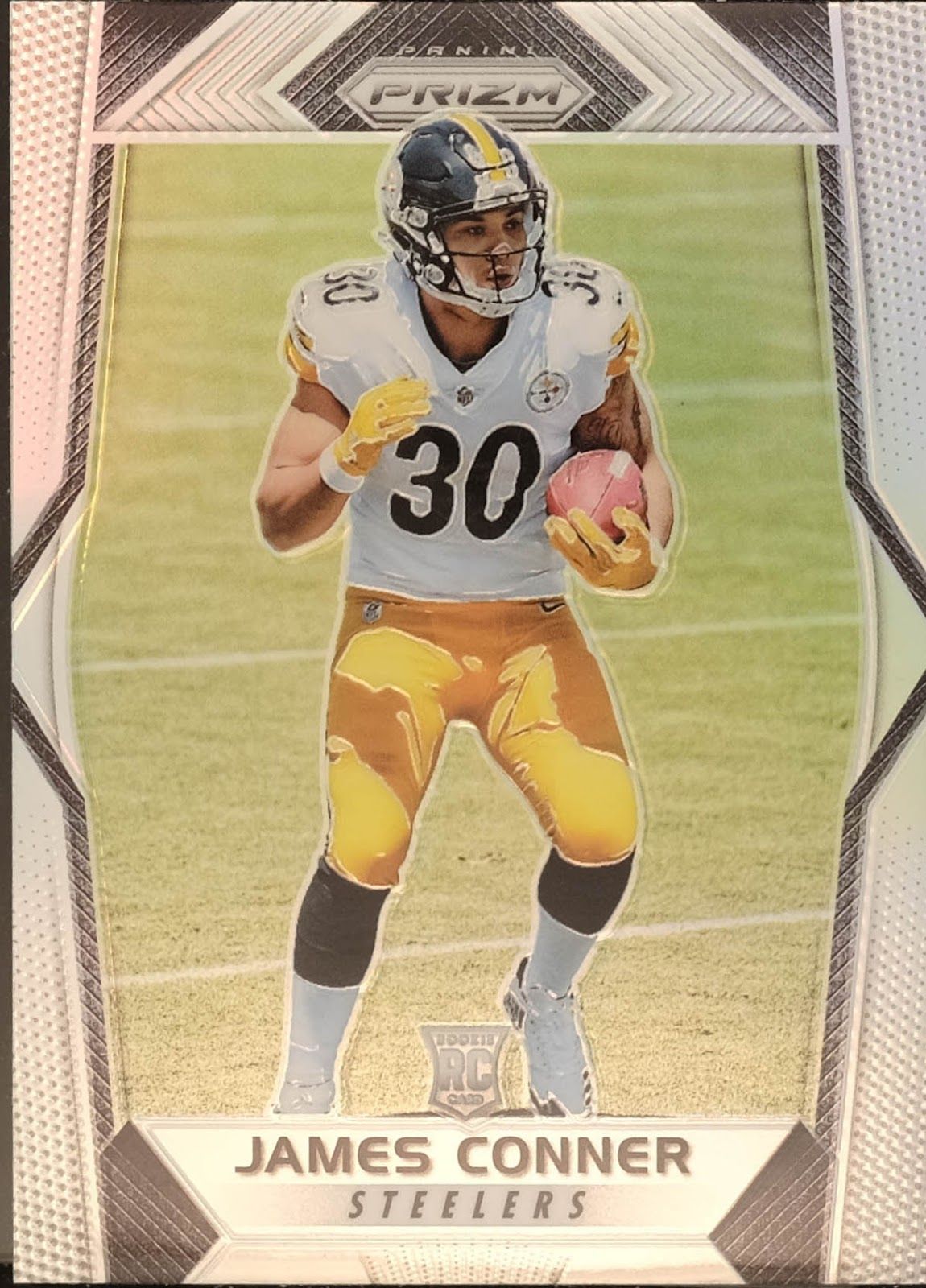 James Conner isn't exactly the picture of health. Which isn't necessarily a knock. He's been through more in his life than any young man should. But as of right now the Steelers are healthy. And a healthy Steelers offense can be a dangerous one. If he can stay healthy, a top-10 season isn't out of the realm of possibilities. But staying healthy is a huge IF. If you shy away from players with injury history, I'd maybe recommend cashing out on his cards after a big game or two.

The market is rising fast on Conner. You may need to pivot. If you can't find Conner's Prizm for a good price, don't be afraid to pick up his Optic cards. His Silver Optic Under $20, is also a good pick up.

Some of the top RBs in the NFL's Prizm RC's sell extremely well. Christian McCaffrey (2017) sells for $150+, Saquon Barkley (2018) sells for $70+, and Ezekiel Elliott (2016) sells for $70+. When Conner first hit the scene and came out hot, his prices were higher than they are now, so there's definitely room to grow. Our staff has some mixed feelings on Conner, but it’s wort

Singletary is EXPLOSIVE. Bills have a very loyal fanbase. Absolutely crazy, but loyal nonetheless. A couple of 50+ yard TD's, and both #BillsMafia and the hobby in general will take notice and the market will rise. Keep in mind Zack Moss should keep Singletary from being an every week RB play, but Singletary’s cards are ones you can get on the cheap and have little downside.

As someone who has felt the pain of owning Dalvin Cook in his fantasy his entire NFL career, I can assure you, there’s always an injury risk. When healthy, there aren’t many RBs better than him. But last year when Mattison came in to give Cook a break, I honestly had a hard time telling them apart. Mattison is an absolute beast.

Mattison can sometimes be an expensive handcuff for Cook owners in fantasy, but his cards are much cheaper. The Base Prizm of Mattison can be had for pocket change, sometimes topping out at $5. You probably won’t get rich from a Mattison Prizm this year, but the ROI can help build your DFS and Betting bankroll. I don't think keeping Mattison long term would be a terrible idea, to be honest.

He might be the most disrespected RB in the hobby. But consider this: he's on a team that was in the top 3 in rushing attempts last year, and he's had back to back seasons of 1,150+ rushing yards. He may be drafted as a Tier 2 RB, but his cards could see some Tier 1 ROI if he notches a 3rd season of 1,000 rushing yards.

As a 7th round pick, he didn't make it into Optic that year, so his only "shiny" RC's are in Prizm and Select. If you are looking to spend less than $20, but like Carson this year, picking up his Select RC might be a better option for you. Anything under $8 for a Select Carson is a good price.

The potential for a productive season for Hines is huge. Why? Philip Rivers loves throwing to the RB. Ladainian Tomlinson, Ryan Mathews, Danny Woodhead, Melvin Gordon, and Austin Ekeler have been fantasy studs when paired with Philip Rivers. Why can't Hines be?

They have Jonathon Taylor (I'm fighting back everything to not add Thomas to that), and still have Marlon Mack. If he's the man for dump off city from Rivers, we could see an increase in his prices. 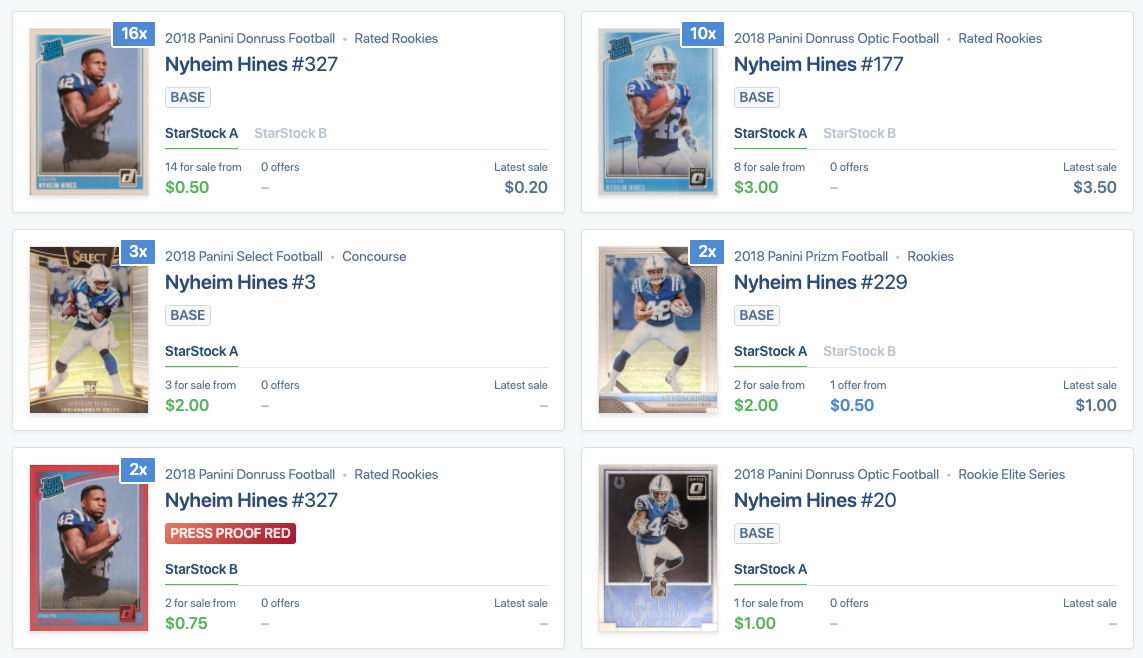 Austin Ekeler cards jumped 2 years ago, and have continued to rise since, when he was catching balls out of the backfield from Rivers. Tarik Cohen is another player who saw cards go up being mostly just a receiver out of the backfield. Nyheim Hines is no Ekeler, but both Ekeler and Cohen are great examples of PPR backs increasing their card value.

There's Sony Michel, Rex Burkhead, and James White. I get it… it's crowded. And Belichick can be a headache with RBs. In fantasy it matters because it may be hard to pick which week they'll go off. BUT, with cards, you don't have to pick that week, you just gotta pick the week to cash out.

The hand injury is what took him off the list, but I still like his overall prospect. I don't think he is a bad pickup still. Even Michel prices went up last year, despite being mediocre at best, just because of his workload and being a Patriot. If Harris would get that kind of workload and actually perform? Big Jumps! Before the injury, he was giving John Hansen good vibes.