The Exception, Not the Rule

Connor is an interesting case study because it’s not scientifically sound to apply medical research based on the average NFL player. Being treated for cancer at such a young age could have altered a number of different things to his body because cancer drugs literally blast all cells, healthy or not, which can alter genes and how the body functions. This means that when evaluating him, we must find any exceptions to the literature and try to match that with his unicorn-like situation. That’s the exact opposite of the usual process. For Conner, there are plenty of exceptions.

Everybody loves the James Conner story. Beating cancer, then being drafted to his hometown team, then becoming the starting RB. From a big-picture perspective, he’s living the dream and nothing and nobody--especially not this Injury Profile-- will take that away from him. However, the road that cancer treatment dragged him through might be the reason why he can’t seem to stay on the field now. You see, Conner had Hodgkin's Lymphoma which affects young adults and is extremely rare. The treatment for this disease is chemotherapy, radiation therapy, steroids, and in a few cases even steroids.

I am not claiming that the combination of these treatments definitively is the reason for his injury issues. What I am saying is that we don’t know how any of those treatments can impact a professional athlete, even after they are in remission. After all, those drugs essentially ravage every “good cell” in the human body in an effort to get rid of the “bad cells.” Could the treatment have altered the way his body creates connective tissue? Did he already have a propensity for connective tissue issues and the cancer treatment exacerbated it? Does it have nothing to do at all with his connective tissue injuries? We simply don’t know.

2. they're common among RBs

Not only did Conner tear his MCL in 2017 requiring surgery, but it was the second time he sustained this injury to the same knee. Furthermore, in 2017, he required surgery to repair the MCL, which is necessary less than 5% of the time. Generally, the MCL heals itself. How did he avoid surgery the first time around? Did the cancer treatment weaken his connective tissue? Why didn’t the tissue re-build its tensile strength as the MCL tends to do? There are several questions about this injury that make my ears perk up.

The year Conner was unleashed is the same year he sustained a high ankle sprain. This isn’t an uncommon injury, but the fact that he faced yet another season-shortening injury due to a contact and connective tissue injury is a concern.

Conner took a hit which led to a “separated shoulder” otherwise known as an AC joint sprain. Yet another connective tissue injury that he subsequently re-injured after trying to return too early. Not only do his tissues seem to be susceptible to injury, but do they also heal at a delayed rate? Yet another question that is yet to be seen. Along with his quad bruise, Conner’s ability to take contact became a legitimate concern.

As he prepares for his 4th NFL season, the odds are stacked against Conner; and as I’ve said over and over, the best predictor of future health is previous health. That’s simply not something playing in his favor. Conversely, the best predictor of future injury is previous injury. Well, considering that knee, ankle, and shoulder injuries are already some of the most common injuries RBs sustain, Conner is already behind the 8-ball from a recurrence standpoint. If he does sustain yet another one of these injuries, will his healing rate be the same? Or worse? Considering that the RB position requires, by definition, the ability to take contact consistently week in and week out and also considering that Conner hasn’t shown the ability to do so- how confident are you in drafting him at the 2.12? Listen, his upside when he’s on the field is undeniable, but taking him with a second-round pick seems like a trap. 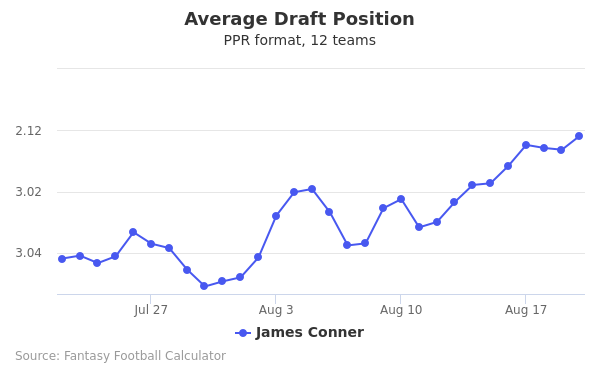 James Conner has yet to play a full 16 game season and since entering the league has finished 13, 12, and 9 games. The running back position requires the ability to take contact, and Conner has specifically demonstrated no ability to do so. As I’ve said in the past, my job isn’t to tell you who to draft, that’s the rankers job. However, it is my job to illustrate the floor of every player due to medical histories and Conner’s floor isn’t necessarily low- it’s simply unknown. He could come back in 2020 and play a full 16 and smash his ADP. The issue is that he’s more of a halfcourt shot than a slam dunk until he proves otherwise, which I hope he does.