Given how difficult this fantasy season was, I hope none of you are playing in any finals or championship games this weekend. Week 17 championships with the old schedule were the worst idea ever and Week 18 finales are somehow even below that. If your commissioner is adamant that your fantasy championship be played on Week 18 moving forward, find a new commissioner. Or a new league.

If you’re betting or playing DFS this weekend, you know that some of these games are going to be absolute catastrophes. With the way the extended schedule is set up this year, there are 3 playoff spots left up for grabs – two Wild Card births in the AFC and one in the NFC. Obviously, seeding is at stake as well with the most prominent thing left to sort out being who gets the first-round bye in the AFC (Titans or Chiefs).

This article is all about finding which teams will be full-go, who might rest starters for the postseason, and which teams are dead. I’ll also follow some player incentives – either contract- or statistical-based – that are interesting.

This article will be updated throughout the week as news continues to come out. 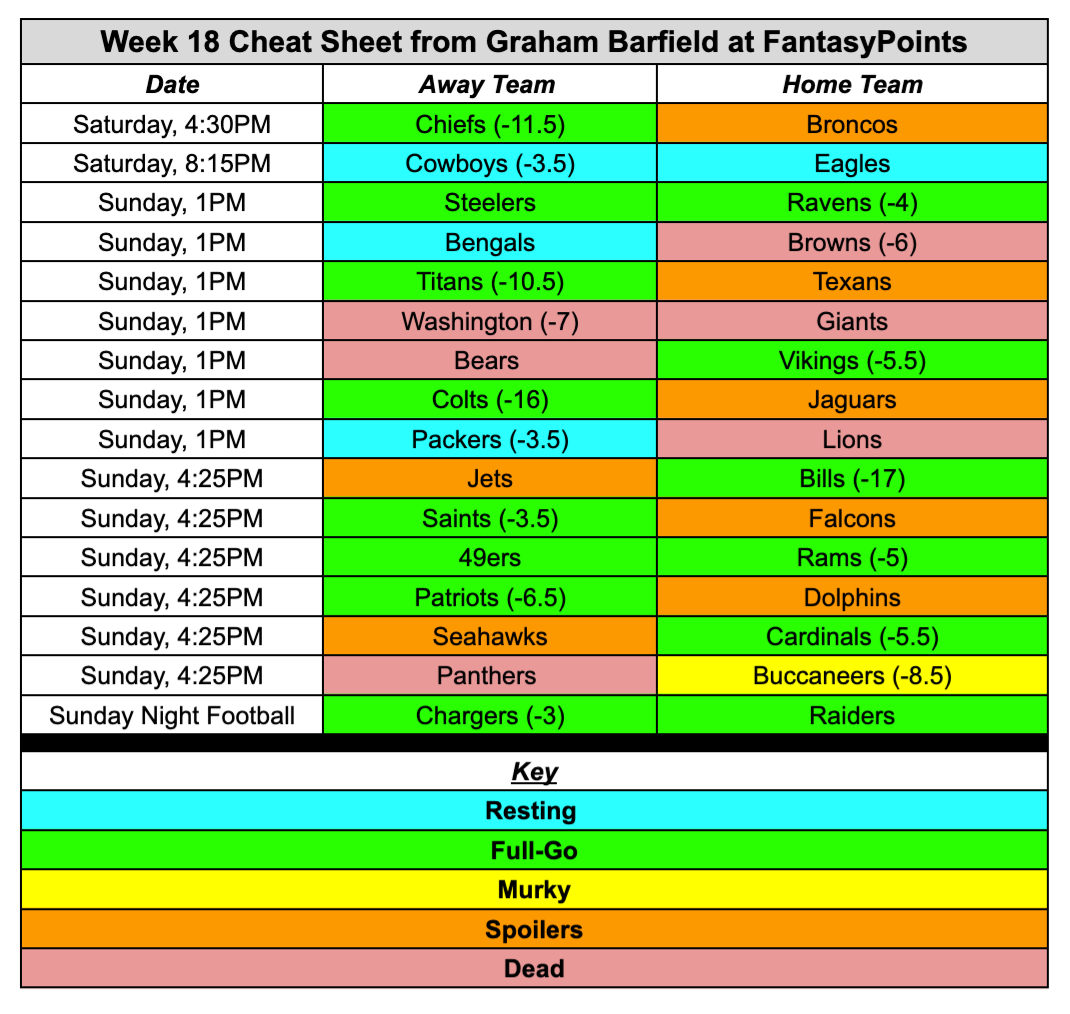 Teams that will rest starters

– Green Bay Packers: Locked up first-round bye. The Packers are only 3.5-point favorites over the Lions. My guess is Aaron Rodgers plays a quarter or two at most.

– Cincinnati Bengals: Burrow and his guys locked up the AFC North and have an outside chance at a first-round bye if the Chiefs and Titans lose. Kansas City plays on Saturday and if they beat Denver, then we will see the Bengals rest all of their starters since they can’t advance their seeding and already have a home game on tap in the Wild Card round. Joe Burrow has already said he won’t play on Sunday and Joe Mixon entered COVID protocols and is out as well. I think we’ll see Chase try to beat the rookie record early.

– Dallas Cowboys: They are pretty much locked into the No. 4 seed no matter what. HC Mike McCarthy and Cowboys czar Jerry Jones said they are not resting starters, but I don’t really buy it. For what it’s worth, the markets don’t buy the coachspeak either. This spread opened Cowboys -7 and it has dropped all week to -3.5. The total has fallen from 45 to 43, too.

– Philadelphia Eagles: Will be the No. 6 or No. 7 seed no matter what. A recent COVID outbreak all but cements that the Eagles will take it easy on Saturday night. And if the Eagles rest starters, I’ll bet the Cowboys follow suit. HC Nick Sirianni left the option to rest his guys open in his Monday presser.

Based on updated COVID protocols, they all have a chance to be cleared in time for Saturday’s game vs. the #Cowboys.

Teams that are full-go

– Kansas City Chiefs: Need a win/tie and a Titans loss/tie and they are the No. 1 seed in the AFC.

– Tennessee Titans: Control their own destiny. If they beat the Texans, they are the No. 1 seed in the AFC. If the Chiefs lose on Saturday to the Broncos, the Titans could rest starters – the Bengals and Patriots have extremely slim chances at the No. 1 seed (less than 5% combined).

– Pittsburgh Steelers: Need to beat the Ravens and a lot of help to make the playoffs (Colts loss, Raiders/Chargers loss).

– Baltimore Ravens: Need to beat the Steelers and a lot of help to make the playoffs (Chargers loss, Colts loss, Dolphins loss).

– Indianapolis Colts: Control their own destiny. If they beat the Jaguars, they are in the playoffs. Otherwise, if the Colts lose, they’ll need the Chargers and Steelers to both lose in order to back their way in.

– Buffalo Bills: If they win, they repeat as AFC East champs. The Bills are the largest favorites on the slate (-17).

– New Orleans Saints: Need to beat the Falcons and the 49ers to lose to make the playoffs. Both the Saints and 49ers play in the 4:25PM ET window.

– Los Angeles Rams: If they beat the 49ers, they are NFC West champs. They can also still win the West with a loss and a Cardinals loss. Both the Rams and 49ers play in the 4:25PM ET window.

Incentive Note: Cooper Kupp is 136 yards shy of breaking Calvin Johnson’s all-time yardage record. Kupp is already fifth on the all-time list (with 1,829 yards) and needs 171 yards to reach 2,000 – which is absurd. Kupp also needs 12 receptions to break Michael Thomas’ single-season receptions record of 149 set in 2019. Meanwhile, Matthew Stafford needs 352 passing yards to reach 5,000 yards for the second time in his career, and he needs two TD passes to reach 40.

– San Francisco 49ers: If they beat the Rams, the 49ers are in as a Wild Card. If they lose and the Saints also lose, the 49ers still get in. Simple as that.

– New England Patriots: They’ve already clinched a playoff spot, but can still win the AFC East if they beat the Dolphins and the Bills lose to the Jets. The Patriots can also clinch a first-round bye if they win and the Bills, Chiefs, and Titans all lose.

– Arizona Cardinals: If they beat the Seahawks and the Rams lose to the 49ers, then Arizona is the NFC West champion.

Incentive Note: AJ Green has a bunch of contract-based incentives in play. He needs another 75 yards for an additional $250k. Christian Kirk is 61 yards away from 1,000 yards for the first time in his career.

– L.A. Chargers: Control their own destiny. If they beat or tie the Raiders on Sunday Night, the Chargers are in as a Wild Card. If the Chargers lose, they are done and can’t back their way in.

– Las Vegas Raiders: If they beat the Chargers, they are in. The Raiders could also get in with a loss, Colts loss, and Steelers loss.

Incentive Note: Derek Carr is 382 yards away from 5,000 passing. Hunter Renfrow needs just one catch to reach 100 for the season.

– Tampa Bay Buccaneers: This one isn’t cut and dry, but the Bucs’ will be the No. 2 or No. 3 seed no matter what. The markets are still giving them an 8-point spread so maybe Tom Brady plays a half? HC Bruce Arians sa

id they’re playing to win, but I can’t possibly see them pushing injured starters to play a ton in a relatively meaningless game.

Incentive note: Mike Evans needs 54 yards to extend his NFL record for the most seasons with 1000 receiving yards to open a career to eight straight seasons. Meanwhile, Tom Brady is just 10 yards short of 5,000. Brady and Rob Gronkowski both have a ton of contract-based incentives to play for, too. Gronk specifically needs seven catches (to reach 55), 85 receiving yards (to reach 750 yards), and/or three TDs (to reach nine TDs) to unlock 500K bonuses in each category.

Bruce Arians on whether he'll rest anyone in Week 18, with playoff seeding still in play: "There is no balance, brother. You play to win. We're not resting anybody."

(Moved Dallas and Philadelphia to resting on Friday.)

– Jacksonville Jaguars: 15-point underdogs to the Colts. The Jags’ will have the No. 1 overall pick again if they lose to the Colts. If they somehow beat Indy, then the Lions will get the No. 1 pick if Detroit loses to Green Bay. It’s a lose-off!

Incentive Note: He’s dealing with a hamstring injury, but Kyle Pitts needs 59 yards to break the all-time rookie record for a tight end.

– Miami Dolphins: 6.5-point underdogs to the Patriots. The Dolphins have won two of their last 3 meetings against the Patriots in games that combined to score 34 and 33 points.

Incentive Note: Jaylen Waddle is a catch away from hitting 100 catches and he needs three catches to break Anquan Boldin’s rookie record of 101 catches. He also needs just 12 yards to reach 1,000 yards for the season.

– Seattle Seahawks: 6.5-point underdogs to the Cardinals. It’s a near certainty that it’ll either be Russell Wilson or Pete Carroll’s last game with Seattle.

– Washington: I lean towards Washington playing their guys – especially Antonio Gibson. He was (somehow?!) taken off the injury report on Friday.

– New York Giants: Jake Fromm is starting. Over the last eight weeks, the Giants have scored just six TDs on their 80 possessions (worst) and have turned the ball over a whopping 17 times (also worst) in this span.

– Chicago Bears: HC Matt Nagy is going to get fired on Monday.

Incentive Note: Darnell Mooney is 71 yards away from hitting 1,000 yards for the first time in his career.

– Minnesota Vikings: HC Mike Zimmer says Kirk Cousins will start, meaning we’ll see the Vikings starters in some capacity. I believe Zimmer – this staff is trying to save their jobs (although it may already be futile). The markets believe Zimmer, too. This spread has moved from Vikings -3 on Tuesday to -5.5 as of Thursday evening.