Hopefully by now, you’ve already read my recent tome, “Upside Wins Championships,” and have come to the conclusion that that title implies. Today’s article will be a less-philosophical, more-actionable accompaniment to that piece, and the first part of a larger series where we highlight the top-four players (across four different ADP tiers) with league-winning upside at each position.Today we will be focusing on the wide receiver position, after already addressing quarterbacks and running backs earlier in the week.

Beckham is the ultimate injury discount. In his own words: “Before the season, I kind of had the hernia thing going on. End up at the end of the season, torn abductor, torn rectus abdominis on the right… So pretty much, I was just f—ed up the whole year… [But], I would honestly say this is probably going to be one of my best seasons. Bigger, stronger, faster…”

Even just the sports hernia would affect a receiver's ability to accelerate/decelerate and get into and out of breaks. But on top of that (and all of the other injuries), he dealt with what was arguably the league’s toughest cornerback schedule.

If one is willing to discount or entirely throw out Beckham’s outlier-ish 2019 season, it’s clear he not only offers unrivaled upside, but his baseline average -- and even downside (when healthy) -- would exceed all but a few player’s upside. Beckham averaged just 12.6 FPG last year, but prior to that, he averaged 20.6 FPG throughout his career. And, across his worst consecutive 16-game stretch with the Giants, he still averaged 18.2 FPG. For perspective, those numbers would have ranked second- and fourth-best at the position last year.

The wide receiver position – with the largest pool of fantasy-relevant names – is typically the position best-suited for finding potential league-winners in the later rounds. As for what I typically look for / how to find those types of players – ADP values with underrated upside – here are a few of the most common examples:

- Improved Environment (Volume): Over the past two seasons, Calvin Ridley (ADP: WR19) ranks 33rd in targets but just 22nd in fantasy points. Now entering his third season (typically the breakout year for wide receivers), we should expect to see a large jump in volume for Ridley, with Austin Hooper now in Cleveland and Julio Jones possibly in decline entering his age 31 season. Last season Ridley averaged 10.7 targets and 22.5 fantasy points per game across the three games Hooper was inactive.

- Improved Environment (Efficiency): According to PFF, Diontae Johnson (ADP: WR43) was charted as open on 84% of his targets last year. That ranked second-best – behind only Michael Thomas – among all non-majority-slot wide receivers. And, among all 63 wide receivers with an aDOT of 9.0 or higher, that led the league. Johnson also led all wide receivers in average separation according to Next Gen Stats. Although Johnson was getting separation at an elite level (and as a rookie no less), Pittsburgh’s quarterbacks were playing at a Mark Sanchezian level, doing him a grave disservice and leaving a lot of fantasy points on the table. Just 44% of Johnson’s targets were deemed accurate in 2019, which, in contrast to his expectation (based on aDOT), ranked fourth-worst of 82 qualifying wide receivers. With Ben Roethlisberger under center in 2020, look for Johnson to make a massive jump in efficiency. Oh, and what did he do after the catch? He led all wide receivers in missed tackles forced (18).

- Underrated Breakout Potential: Terry McLaurin’s (ADP: WR27) rookie season was historically great. His 32.7% yardage share and 86.5 PFF Grade are the best marks by any rookie wide receiver since Odell Beckham Jr. On top of this, he led all rookies and ranked 30th-overall in fantasy points per game (13.7). The Redskins added very little target competition in free agency or via the draft, and McLaurin appears entrenched as the team’s No. 1 receiver. Dwayne Haskins is likely to make some improvements in his sophomore year, and McLaurin has an advantage there – having played two seasons with Haskins at Ohio State. In spite of all of this, and the fact that wide receivers typically make a massive leap forward in their sophomore seasons, his ADP ranks barely above his 2019 finish. 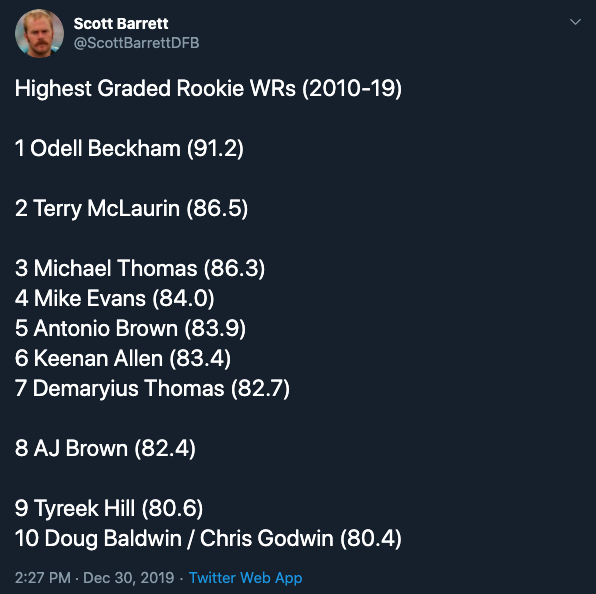 - Anchoring Bias: Over the final 14 weeks of last season, DeVante Parker ranked fifth among all wide receivers in fantasy points per game (17.5). Across the full season, only one wide receiver (Michael Thomas) reached 55 yards in as many games as Parker. So, why is his ADP (WR25) 14 spots below where he actually finished last year? Because fantasy drafters are overrating the importance of risk in contrast to upside, and/or can’t get over being burned by Parker in the past. (These sorts of players – also “post-hype sleepers” – are constantly being undervalued in fantasy drafts.)

- Other: Last season, I predicted Chris Godwin would out-score Mike Evans. And yet, Evans went three rounds earlier in drafts. I also said Lamar Jackson was the single-best pick you can make in fantasy drafts. And even so, he was typically drafted in the double-digit rounds. Sometimes a player’s ADP is just dumb and there isn’t a good explainable reason why. We’re seeing that in 2020 drafts with Robert Woods (ADP: WR23). He finished 12th in FPG last year, and 11th in total fantasy points in 2018; and so, as I see it, his ADP sits well below his absolute floor. Look for Woods to benefit from Brandin Cooks’ departure and more 12 personnel sets (to Cooper Kupp’s detriment.) From Week 9 on, Woods ranked second in FPG (19.2) and fourth in targets per game (11.3), while Kupp saw his target share drop from 27% to 15%. Oh, and on top of all this, he’s also due for a massive regression in the touchdown department (another great way to spot potential values) – he exceeded 1,100 yards in 2019 but was held to just two touchdowns, which is something that’s happened only four other times in the history of the NFL.

This one’s too easy.

What’s his downside? About the same as any other player around his ADP – low probability of returning starter-level production. For many of those other players it’s because they’re not very good. For Brown, talent has very little to do with it.

What’s his upside? His upside is Antonio Brown. Which is to say, he offers league-winning upside at any draft pick, let alone one in the 18th round. Prior to last season, Brown had finished fifth, first, first, first, and first at the position in total fantasy points. Quite literally his upside is unrivaled, except for maybe Michael Thomas who gets drafted 17 rounds earlier.