Hopefully by now, you’ve already read my recent tome, “Upside Wins Championships,” and have come to the conclusion that that title implies. Today’s article will be a less-philosophical, more-actionable accompaniment to that piece, and the first part of a larger series where we highlight the top-four players (across four different ADP tiers) with league-winning upside at each position. Today’s article will focus on the running back position, after already addressing the quarterback position yesterday here.

In 54 games with Miami, Drake exceeded a dozen touches only 15 times. But in those games, he was impressive, averaging 16.8 FPG. For comparison’s sake, 16.8 FPG would have ranked right behind Leonard Fournette last year, who hit 15 touches in all 15 of his games, averaging 22.7 per game. It was clear the potential was always there with Drake, he just needed the right landing spot.

In Arizona, it’s a near-perfect one. Last year, Arizona’s RB1 (defined as the team’s highest-scoring running back in any given game) ranked fifth in fantasy points per game (20.2), behind only Carolina, Green Bay, Los Angeles (Chargers), and Minnesota. From his first game in a Cardinals’ uniform until the end of the season, Drake averaged 16.2 weighted opportunity points, 50.6 snaps, and 19.9 fantasy points per game. For perspective, those numbers would have ranked eighth-, seventh, and third-best at the position last year.

And everything about Drake’s situation looks better now than it did last year. The team fully committed to Drake, making him the eighth-highest-paid running back of the 2020 season. He’ll have a full offseason to learn the plays and for HC Kliff Kingsbury to design plays that work best for him. And, of course, the offense appears much more potent with improved blocking up front, after adding WR DeAndre Hopkins and OT Josh Jones (PFF’s No. 4 offensive lineman in the draft). 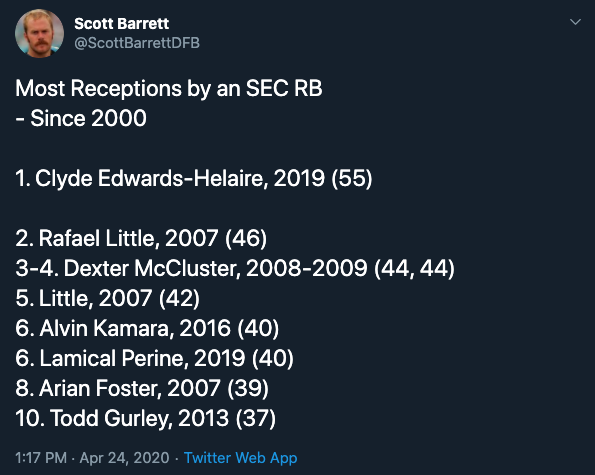 In 2019, Edwards-Helaire set an SEC record for receptions by a running back. Keep in mind, in PPR leagues, targets are worth 2.8 times as much as a carry for fantasy running backs. In April, before the NFL Draft, our own Graham Barfield called Edwards-Helaire the best route runner to come out of college since Christian McCaffrey. Of course, he also impressed as a runner – posting historically great numbers by missed tackles forced per attempt and PFF run grade – but his prowess as a receiver is what elevated him above his peers and led me to call him the pre-draft RB1.

And then he was drafted first at the position, in Round 1, to the best possible landing spot. Without question, The Chiefs have the best offense in football, and the most-attractive offense for fantasy football. Without question, HC Andy Reid is the best coach to have calling plays for your fantasy running back. In 12 of the last 16 seasons, Andy Reid’s RB1 has finished top-eight among running backs in fantasy points per game (75%). No other NFL coach or play-caller comes close.

Edwards-Helaire might start off the season in a committee alongside Damien Williams, but the decision to draft him in Round 1, and especially the team’s comments immediately after drafting him make it clear – that won’t last long. The team views Edwards-Helaire as “a Pro Bowl running back”, who will be used as the featured back in their offense, playing on every down and earning workhorse levels of volume. Stylistically, they see him as someone similar to Christian McCaffrey and Brian Westbrook. The former just scored the second-most (behind only Ladanian Tomlinson’s 2006 season) fantasy points by any player in any season ever. The latter, with Reid as his head coach, averaged 21.4 fantasy points per game from 2004-2008, which ranked second-most, behind only Tomlinson.

Drafting a “handcuff” – or, the backup to your starting running back – is typically meant as a sort of insurance policy, to reduce your exposure to risk and ensure production should your starter suffer an injury. However, you can also increase your upside by drafting a backup running back without exposure to the starter. This is nearly a core tenet of Shawn Siegele’s famous “Zero RB” draft strategy.

Alvin Kamara missed two games last year. What happened in those two games? Murray handled 91% of the team’s touches out of the backfield, averaging 24.0 carries, 9.0 targets, 153.5 yards, 2.0 touchdowns, and 34.4 fantasy points per game.

Although Kamara is clearly the running back to own in New Orleans, Murray might have top-three-overall upside should Kamara suffer an injury. In fact, if you asked me who I’d rather own – Kamara (with Murray healthy) or Murray (with Kamara hurt), I’m not sure the answer isn’t Murray. HC Sean Payton clearly prefers a committee backfield, but is willing to adopt a bell cow-approach when there’s an injury to one of his primary backs. We saw this in 2018 – Kamara averaged 34.0 fantasy points per game when Mark Ingram missed time due to suspension (four games total), but only 19.8 fantasy points per game after he returned.

The case for Bernard is pretty similar to Murray’s, except Bernard has an additional pathway towards bell-cow usage, beyond just an injury to Joe Mixon. It’s not yet priced into his ADP, but Mixon carries a good deal of holdout risk. Over just the past two seasons, we’ve seen Le’Veon Bell and Melvin Gordon miss a combined 20 games due to holdouts. Ezekiel Elliott didn’t miss any time, but that one came down to the wire. Mixon hasn’t publicly threatened to holdout, but, according to The Athletic’s Paul Dehner, the Bengals are “prepared for a holdout if they can’t agree to a long-term deal [with Mixon].”

Mixon played on 59.5% of the team’s snaps last year, to Bernard’s 40.3%. No other Bengals running back touched the ball even once. Across Bernard's last four games without Mixon on the field, he averages 80% of the team's snaps, 13.0 carries, 5.3 targets, and 19.4 fantasy points per game.