It’s the final week where we will need to deal with bye weeks. Before we get too far ahead of ourselves, four teams will get some rest in Week 14. Three of those (Indianapolis, Miami, and New England) are among the hottest defenses in the league. Maybe we’ll see some better numbers from the 28 offenses set to take the field. The combined PPG average from Week 13 (21.39) is the second-lowest of the season (21.38 from Week 7).

The average air yards/coverage snap declined for qualified outside corners, slot corners, linebackers, strong safeties, and free safeties for the sixth-consecutive week — the stretch of time where I’ve been paying particular attention. In addition to seeing more INTs (eight) than TDs (seven) on throws traveling at least 20 yards for only the third week this season, we’ve never seen the quality on those attempts (9.9 YPA) than what was put on display last week. Justin Herbert accounted for 16% of the total number of deep completions and 19% of the resulting yardage on only 7% of the attempts. You can check out the updated charts below for more information. 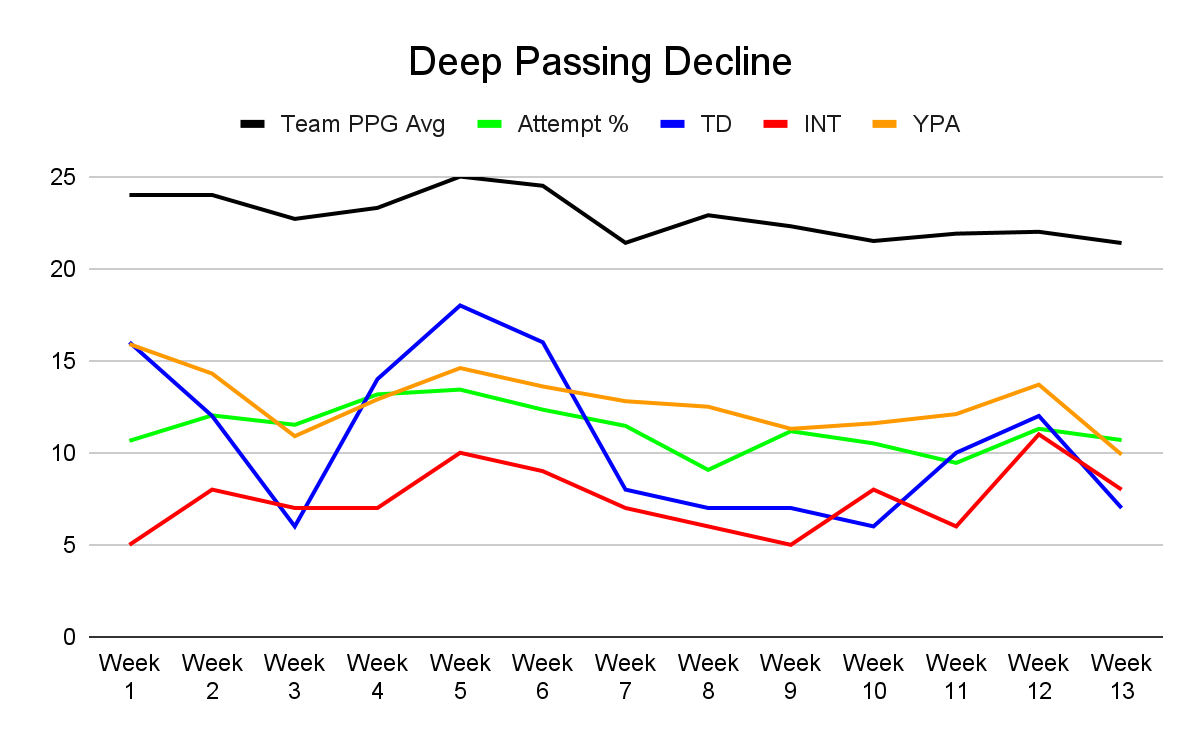 You’ll see a number of coverage metrics throughout this series. The following chart provides the full names for the acronyms and the coverage performance numbers for each position group through Week 13:

Pittsburgh Steelers at Minnesota Vikings (Over 43.0)

Seattle Seahawks at Houston Texans (Under 41.5)

Baltimore Ravens at Cleveland Browns (Under 42.0)

Jacksonville Jaguars at Tennessee Titans (Under 44.0)

Atlanta Falcons at Carolina Panthers (Over 42.5)

Detroit Lions at Denver Broncos (Under 42.0)

Diontae Johnson is the only safe option from Pittsburgh this week. No other Steeler should approach Cash/Single-Entry (SE) lineups. But what about _______? Yes, that includes him. In an unexciting matchup between Pittsburgh and Baltimore last week, Johnson collected an 8/105/2 receiving line on 100% of team routes, a 40% target share (his ninth game with double-digit targets), and 33.5/26.5 FPs. The Ravens put a healthy, top-seven rate of Cover 1, 4, and 6 on the field. Diontae collected 3/63/1 of his line across from Anthony Averett, 3/26/1 against Marlon Humphrey.

The Vikings are providing opposing WR units with 2.33 red zone touches/game (the most), 41.9 FPG to WRs this season (second-most), and 45.3 over the last four weeks (the most). Opposing teams are accumulating 250.5 receiving YPG (10th-most), 7.16 YPA (10th), and a 17.2% completion rate on deep throws (fifth-highest) against the Vikings. The Purple People Eaters use the sixth-highest rate of Cover 2, 11th-highest of Cover 4, and eighth-highest of Cover 6.

Patrick Peterson will return from the COVID list to cover the right side of the defense (left side of the offense) on greater than 90% of his reps. That’s a significant number since, while OC Matt Canada does like to shift Johnson around, Diontae clearly prefers working from the left side of the field. Peterson has played some decent ball for Minnesota this season. Bashaud Breeland and Mackensie Alexander have been the massive coverage liabilities. Among 79 qualified outside corners, Peterson is permitting 1.08 YPCS (38th-fewest), 0.23 FP/CS (31st), 0.14 AY/CS (33rd), and 109.4 TPR (20th-highest).

Future cap numbers have resulted in a lot of opinions being tossed out that Cousins’ tenure as a Viking could be coming to an end. If so, we can all count on seeing over 20 franchises eye-gouging one another for the right to sign him. He has easily been one of the top-three QBs this season, posting the sixth-most FP/Db (0.48), third-most pure passing FPG (19.0), the eighth-highest passer rating under pressure (82.2), and second-highest passer rating overall (106.3). Making Captain Kirk one scary QB for opponents to see on the schedule, from a history of scheme success, he’s emerged as one of the most complete QBs in the game.

Two years ago, the prospect of Cousins working against a defense featuring top-eight rates of Cover 2, 4, and 6 would present an issue. Not for the 2021 version of Cousins. The Vikings’ defense gave the game away in the closing seconds, but Cousins assembled 340 passing yards, a 75% completion rate, two TDs, and 24.2 FPs last week against a Lions’ defense featuring those exact schemes.

Even if the 2019 version of Cousins was entering Week 14 against the Steelers, those split-safety looks would not stand in his way. Pittsburgh is utilizing a gargantuan rate of Cover 3 this season. They’ve used it at 66% or just below in three of the last five weeks. Blitzburgh is delivering 17.7 FPG to QBs this season (13th-most), and 18.2 during the last four while Joe Haden has been out with a foot sprain (sixth-most).

What’s just as good as a massive Cover 1 rate in opposition to Cousins? A massive Cover 3 rate in opposition to Cousins. Across his last 43 games, he’s generated 0.49 FP/Db (third-most), 100.3 passer rating (seventh-highest), the fourth-highest TD rate on throws against Cover 3 (18%), and he’s packing in an 11% spike to his AY/Att. Justin Jefferson is one of the most obvious plays in all of Week 14 without Adam Thielen (high-ankle sprain) on the field. Even with WR4/WR3 pricing, he’s worth every penny. But Cousins is an outstanding value with QB11/QB12 pricing this week. He’s provided us with profit in excess of floor value in 67% of his ‘21 games. That number will rise to 69% after Week 14.

Why is Diontae Johnson the only safe play from the Pittsburgh roster? For all of the potential held by Najee Harris ($7.7K/$9.0K), he hasn’t hit profit value outside of doing so during a four-week stretch from Weeks 3 through 6. His ground efficiency has been severely handicapped by a bottom-five run blocking O-line. Even more debilitating, the Steelers are asking Ben Roethlisberger ($5.3K/$6.8K) to pass 64% of offensive snaps. I’ve beaten his 7.32 air yards/attempt (5th-lowest) and 46.7 passer rating under pressure (third-lowest) to death this season. Looking elsewhere, nothing is more criminal than the targeting from Big Ben. Even with Chase Claypool ($6.1K/$6.2K) dealing with turf toe, he was only offered 10% of the Week 13 target share on his 21 routes, and Roethlisberger devastatingly providing Harris, Ray-Ray McLoud III ($3.2K/$4.8K), and Zach Gentry ($2.8K/$4.5K) with 34% of the targets. Those three combined for 1.06 YPRR. Claypool returned 2.48 YPRR with his work.

Even with Claypool doing his most work across from Bashaud Breeland, he’s nothing more than a GPP flier in this offense. Mackensie Alexander’s coverage allowances have plummeted to land inside the level of the bottom-five nickel CBs. After Anthony Miller fell off the face of the earth last week after being on the field for 43% of team routes in Week 12, Alexander will be able to improve his numbers with McLoud moving ahead of James Washington in the rotation. Perhaps Pat Freiermuth ($4.3K/$5.2K) can find the underneath zones occupied by Alexander with his 91% combined inline and slot reps.

All four of Baltimore’s scoring output of 30-or-more points occurred at home. They failed to even hit 20 against Detroit and Chicago on the road. So, do not get carried away with future expectations by Pittsburgh’s defense from their Week 13 result. There is no question that the Steelers offer a top-five pass rush. But they are vulnerable both on the ground and through the air. It would be a clear sign to fade if Dalvin Cook ($8.0K/$8.2K) somehow manages to take the field two weeks-removed from separating his shoulder. And say goodbye to last week’s opportunity to target Alexander Mattison ($7.8K/$8.2K) in GPPs due to much of the field fading his spike in pricing. He’s Cash/SE all the way in this spot against a Steelers’ defense that’s surrendering the sixth-most FPG to opposing RBs (18.2).

No, Adam Thielen… yes, Justin Jefferson ($8.3K/$8.5K). He works all across the formation, so he’ll see coverage from both Ahkello Witherspoon and Cameron Sutton. Sutton has been better, but neither should present an issue for JJ. He is manufacturing 0.59 FP/Rt (fourth-most), 3.11 YPRR (fourth), and is drawing a 27% target share when defenses employ Cover 3 (sixth-highest) during his career. We can count on seeing K.J. Osborn ($4.1K/$5.5K) donning a massive number of lineups this week. He kicked outside in place of Thielen last week, and will do so again with a featured share of targets and WR66/WR51 pricing.

Dede Westbrook ($3.1K/$4.9K) is someone to keep in mind for the large-field GPP junkies of the world. Maulet has somehow managed to be the sixth-lowest targeted nickelback in spite of returning the sixth-highest TPR (109.6) when targeted. Week 14 could be a statement opportunity for Osborn. Just keep in mind that Tyler Conklin ($4.1K/$5.4K) is likely to be fed with his fifth 20+% target share of the season.