From a glass-half-full point of view, nine teams scored at least 30 points in each of the last two weeks after only occurring twice over the previous eight weeks. But the half-empty reality is that the five lowest scoring weeks have been submitted in the last six weeks. We haven’t seen the NFL weekly PPG average at least match the season-long average since Week 6. And there is a direct correlation between the depressed scoring and deep passing (throws traveling at least 20 yards). During the last six weeks, the deep passing attempt rate has declined by 14% from the six weeks prior. It’s been followed by a 39% decline in deep TD strikes, only a 7% drop in deep INTs, a 10% decline in YPA, and a 10% drop in the weekly PPG average.

The same chart depicted in previous weeks is provided below. It’s been updated and the weekly franchise PPG average has been included: 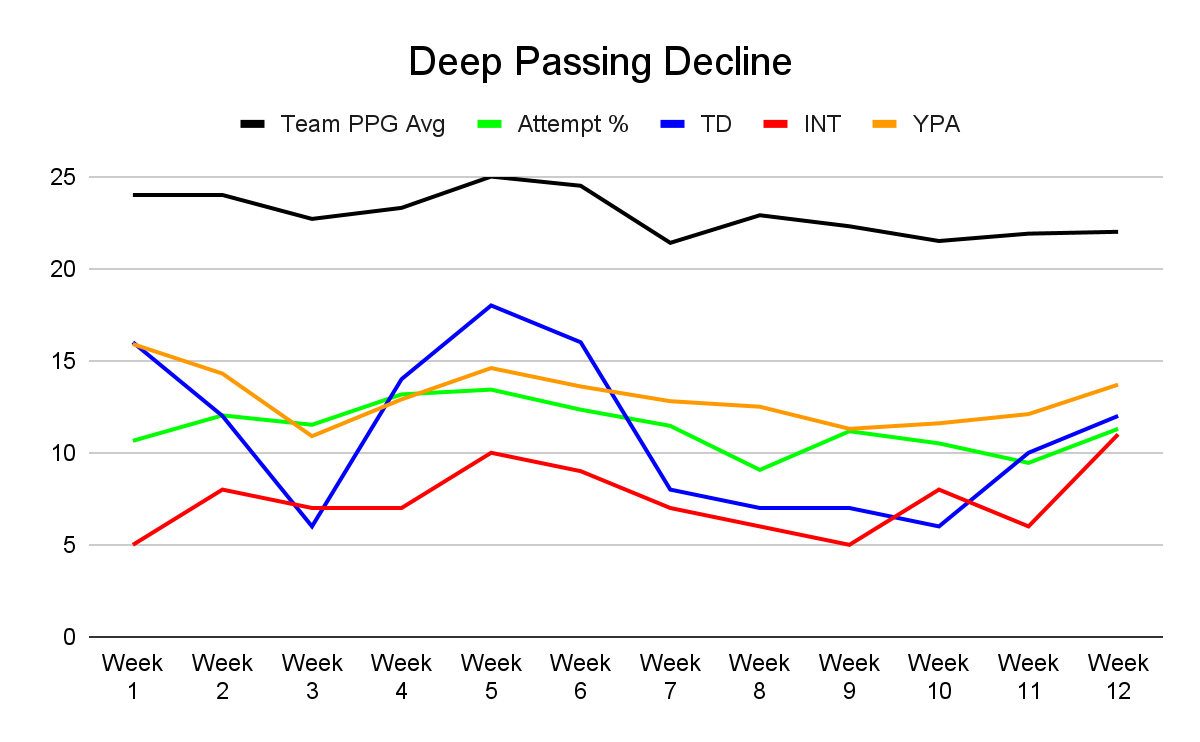 The deep target rate for Week 12 (11.3%) is the highest it’s been since Week 9 and deep TDs (12) are the most since Week 6. However, the added aggression brought about the most deep INTs of the season (11). Qualified outside cornerbacks easily stood as the top performing position group from Week 12. They lowered their season-long target passer rating (TPR) by two full points. And average air yardage/coverage snap (AY/CS) allowed fell for each position group in a sixth straight week.

You’ll see a number of coverage metrics throughout this series. The following chart provides the full names for the acronyms and the coverage performance numbers for each position group through Week 12:

Indianapolis Colts at Houston Texans (Under 45.5)

Arizona Cardinals at Chicago Bears (Under 45.5)

Minnesota Vikings at Detroit Lions (Under 46.5)

Baltimore Ravens at Pittsburgh Steelers (Over 44.0)

This matchup between Dallas and New Orleans is one of the most promising Thursday night showdowns from a fantasy potential viewpoint all season. It’s perhaps only eclipsed by the Cowboys at Buccaneers opening week shootout. In every slate where they are available, both QBs should be located at the very top of everyone’s DFS target list. If Dak Prescott had the services of CeeDee Lamb (concussion) and Amari Cooper (COVID) against the Raiders last week, the result would have been quite different. Both receivers are in line to return to the field this week. Dallas has the sixth-highest chance to reach the playoffs after playing the 11th-most difficult schedule — currently ranked fourth in my power rankings.

The Saints were obliterated on Thanksgiving against Buffalo. So, the decline in Cover 1 rate last week is an anomaly. They’ve used Cover 1 at the eighth-highest rate, also featuring Cover 4 at the third-highest. The 20 TDs vs. five INTs, 0.52 FP/DB (fifth-most), and 104.3 passer rating (also fifth-best) against Cover 1 do not truly indicate how dominant Prescott has been when facing man coverage over the last three seasons. When opposing defenses have dared to use Cover “Free”, the “Raynemaker” — his first name is actually Rayne — has a 134.7 passer rating with 14 TDs vs. zero INTs. Cover Free, also known as Cover 0, is an aggressive blitz without deep safety help, and with a single defender in coverage on each eligible receiver. That 134.7 passer is only bested by, arguably, the best Cover Free QB in my lifetime, Andrew Luck. The GOAT’s passer rating? 77.3.

Yes, New Orleans utilizes Cover 0 at a top-10 rate, but not at a high enough percentage for us to go overboard. During the last four weeks, the Saints have handed out 88.1 FPG to opposing offenses (ninth-most). It’s actually only 0.9 FPG below the 89.0 (20th-most) they’ve permitted this season, but that’s an example of the league-wide scoring decline coming into play. So the 26.2 FPG they have distributed to QBs over those last four weeks (the most) — 19.2 on the season (fifth-most) — should have everyone’s attention. N’Orleans has allowed the seventh-highest completion rate of 20-plus throws (16.9%) and fourth-highest of 40-plus (3.72%).

It’s tough to project many QBs with a higher weekly floor than Prescott’s. But Taysom Hill should quickly ascend to the elite weekly-floor grouping Prescott populates with a small handful of other QBs. During Hill’s four games as the starting QB last season, Hill averaged 21.1 FPG. And 53% of that number was manufactured with his legs. In the right matchups, his arm also comes into play. He’s posted 0.42 FP/Db and a 109.1 passer rating across from Cover 2, and added 0.53 FP/Db and a 93.4 passer rating against Cover 3 over the last three seasons.

The only comparable QBs offering similar rushing ability with very scheme-specific passing potential would be Jalen Hurts. Hill’s ownership percentages will be high with QB30/QB19 pricing, but I still have him populating a number of my large-field (LF) GPP lineups. Keep in mind, with four teams on a bye this week, maneuvering GPP ownership will be a massive challenge. So much so that, when last second inactives are released prior to the 1 PM and 4 PM games, the player pool will be further restricted to the point that those who chose to fade Hill due to the expectation of big ownership numbers will entirely regret the decision come Sunday.

Let’s take a look at the FPs/opportunity numbers for some of the top RBs:

While some in the industry would like you to believe that the ability/effectiveness/efficiency of Ezekiel Elliott ($7.9K/$8.4K) is some type of massive decline, consider that he’s fabricating 0.901 FPs/opportunity with his 18.6 attempts + targets this season. One of the most significant issues to overcome when relying on the opinions of fantasy professionals is a personal bias. Don’t take that the wrong way, I truly feel that ~95% of those personal biases are entirely unconscious to their existence. It’s not a matter of individual discrimination, per say, but due to one or more personal experiences where that player has burned that analyst. However, when a tout chooses to look beyond the anticipated opportunity, metrics, and health of an individual to decide upon their recommendations, they are doing a disservice to their readers. As for Zeke in Week 12:

Does that indicate I think everyone should roster Elliott with RB5/RB7 pricing against the top-two run defense of New Orleans that’s licensed the eighth-fewest FPG to RB units (21.5)? It does not. That said, in LF GPPs, Zeke could prove to be a sneaky runback pivot off Lamb or Cooper for those rostering Hill. Just keep several miles between Elliott and your Cash/Single-Entry (SE) lineups.

The DK pricing for Tony Pollard ($6.5K/$5.9K) as the RB12 is a complete head-scratcher. An obvious overreaction to splitting the carry share during the last three games. The ‘Boys might sit at 7-4, but they have lost their last two games, and three-of-four. In games where Dallas hands the ball off at least 24 times, they are 7-0. That obviously means they’ve lost all four games when providing their RBs with less than 24 carries. Their 6-1 start coincided with Elliott out-pacing Pollard with 143 opportunities vs. 87, respectively. Since then (1-3 record), the opportunity gap between Zeke and Pollard has closed to 62 vs. 47, respectively. Jones is obviously putting his foot down in support of Elliott as Dallas’ featured back. Can we argue against the decision?

CeeDee Lamb ($6.7K/$7.7K) is easily his team’s most well-rounded receiver from a scheme perspective. And the most significant improvement Lamb has made to his game this season is against man coverage. After playing a distant second to Amari Cooper ($6.0K/$7.0K) against single coverage last season, check out the current numbers vs. man coverage through Week 12:

With Cedrick Wilson Jr. ($3.5K/$5.6K) ruled out, keep Noah Brown ($3.0K/$4.7K) on standby just in case Cooper is unable to gain clearance. Otherwise, Brown and Malik Turner ($3.0K/$4.6K) are not going to see the field enough for our consideration. Sean McKean ($2.5K/$4.3K) ran a single route last week. But that was enough to collect his lone target to vulture a TD from Dalton Schultz ($5.7K/$6.0K). Schultz still managed a 3/46/1 line for 15.6 FPs. Dawson Knox scored a pair of TDs on New Orleans last week, so keep Schultz in mind during lineup construction with his top-five TE upside.

Alvin Kamara ($7.8K/$9.0K) appears to be highly questionable to play on Thursday Night Football. Even if he plays, Kamara is unlikely to be pushed in his first action after a three-week absence. If he’s ruled out, I’d take the cautious approach with Mark Ingram II ($6.0K/$6.6K). If his starting history is any indication, Hill is going to eat up something in the neighborhood of a 50% share of the carries. Ingram could end up splitting the remaining attempts with Tony Jones Jr. ($4.7K/$4.8K). The situation could be further diluted if Ty Montgomery ($3.2K/$4.7K) continues to be featured in the up-tempo role.

New Orleans has played the most difficult schedule this season. But they could apply a significant boost to the current 27% chance of making the playoffs if they can even their 5-6 record with a victory over Dallas. But a receiver group “headlined” by Tre'Quan Smith ($4.6K/$5.9K), Marquez Callaway ($4.7K/$5.7K), Deonte Harris ($3.6K/$5.2K), Lil'Jordan Humphrey ($3.1K/$4.7K), Kenny Stills ($3.0K/$4.6K), Juwan Johnson ($2.9K/$4.5K), and Nick Vannett ($2.8K/$4.2K) will not do the Saints any favors if they somehow manage to extend their participation to the postseason. We have no way of knowing which receiver Hill will look to support his offense. This offense is likely to run the ball on two-thirds of its offensive snaps.