Had I trusted my gut, we all would’ve benefited from Chris Streveler’s solid game on a Friday night when the rest of the QBs on the slate face-planted. Streveler ran a 4.51-second 40 at his North Dakota pro day. He is simply not built like your ordinary QB, as you can see for yourself.

The Bottom Line: Kyler Murray will see his first preseason snaps on Friday. If you get up to get a snack, you’ll miss his involvement entirely.

It was a bit of a struggle deciding between Brandon Allen and Steven Montez. The news that Kyle Allen would see the field, initiating a battle for the QB2 role made the final decision an easy one. We don’t have much in the way of sexy videos or witty Tweets on Allen. But the one detail about the former Arkansas Razorback that you can win a few dollars on is his complete pwnage of Cover 3. During his two seasons in the NFL (eight games), Allen ranks third-best in FPs/dropback, sixth-best in passer rating, and with the eighth-highest increases in YPA when facing a Cover 3. On 21% of dropbacks, he’s accumulated 31% of his yardage, and 38% of his TDs.

The Bottom Line: If you need an example, check out the one game where he faced a competitive rate of Cover 3 last season: Week 16 at Houston. Allen completed 78.4% of his INT-free attempts for 371 yards, and a pair of TDs. As for his opponent this week, the Football Team ranked with the ninth-highest Cover 3 rate last season, and rolled it out at the fifth-highest rate in preseason Week 1. He’ll eventually give way to the unimpressive Kyle Shurmur, but should have enough time to help us along our way.

If you missed out on Jaret Patterson’s first game with WFT, take the time to watch this one. He may be diminutive in height, he makes up for it in girth. As you can see, he’s elusive, and possesses impressive functional strength.

Another detail in the video to notice is Patterson catching a pass. In his six games played last season, he carried the ball 141 times, and did not see a single target. OC Scott Turner sees much in the young man’s future.

The Bottom Line: The days of giving Peyton Barber double-digit carries to only be rewarded with a direct path into a defender may (hopefully) be coming to an end. We know Antonio Gibson is the guy in Landover and that J.D. McKissic has the skills to fill in, if necessary. But this offense seems about ready to counterbalance its outstanding defense. They will need multiple skilled backs in order to complete the dirty work of a 17-game season. And the time for Turner to test the resilience of Patterson is now.

It pained me to drop Jonathan Ward down to the alternatives. His skillset is perfectly suited to a potential three-down role, if called upon. And, if James Conner were to go down, Ward would be the guy to fill his short-yardage function. Last time I checked, HC Kliff Kingsbury didn’t install Conner as his featured back. That distinction belongs to Chase Edmonds. And Eno Benjamin is not only the best suited to jump into Edmonds’ spot due to injury, he hit the ground running against the Cowboys last week.

The Bottom Line: It was Ward who saw the passing game volume, but Benjamin was the more explosive on the ground. Considering it was his first taste of NFL action, I am banking on Kingsbury increasing his involvement against a Kansas City defense that appeared to be most vulnerable to the run last week.

Just reading the above snippet, you might think Chris Evans’ failed miserably in his first appearance in the NFL. Yes, the rookie out of Michigan only collected 25 rushing yards on 12 carries, he added 27 yards after contact, and a TD. He also caught all four of his targets for another 33 yards. As the Tweet mentions, OC Brian Callahan is simply pushing the kid with some tough love in order to cut back on attempts to shake defenders in the backfield with shifty moves. For our purposes, as long as the coaching doesn’t result in a seat on the bench, the need for his coach to see improved play should result in ample opportunities.

The Bottom Line: The best part about the Bengals’ coach wanting to see him clean up a few things is that he’ll have an opportunity to do so against backups from a Washington team that appeared completely lost in both coverage and run defense against New England last week. Evans is going to make the 53 for Cincinnati, but he is far from a polished product. 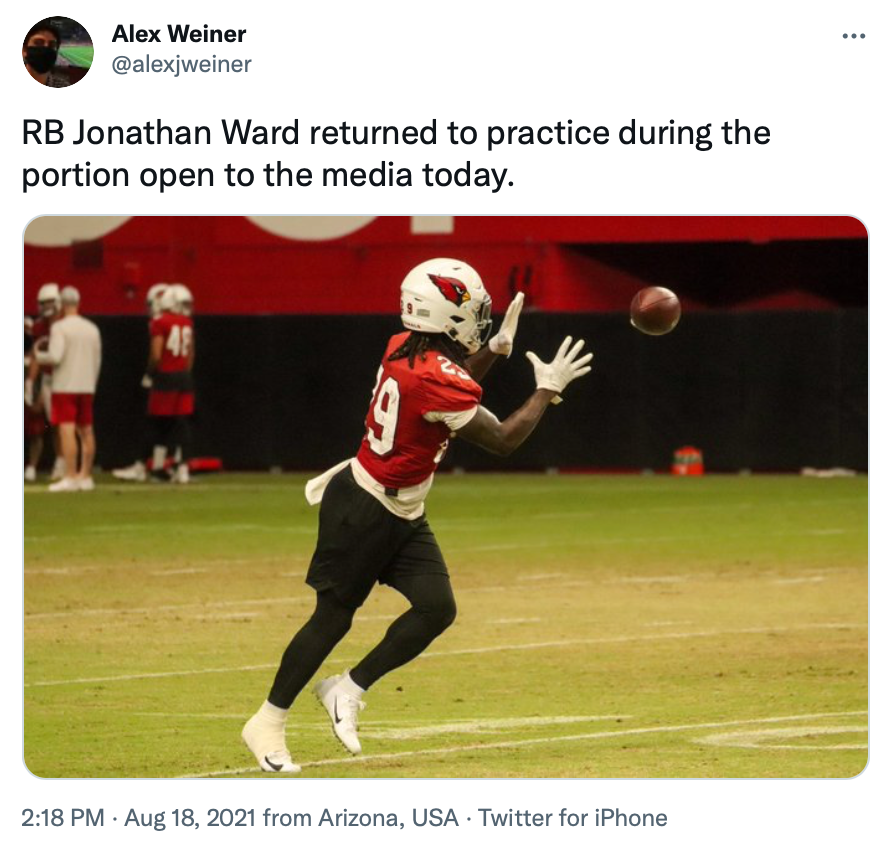 Another in a long list of unexpected training camp darlings, Daurice Fountain quickly went from a failed project in Indianapolis to placing himself on the cusp of landing a spot on the Chiefs’ opening day roster. It’s likely that HC Andy Reid will continue to hand the first quarter to his first-stringers, second quarter to his second-stringers, etc. But those limitations did not extend to the offensive line or receivers. Fountain led KC WRs in total snaps (30), routes (20), targets (6), receptions (4), and receiving yards (38) last week.

The Bottom Line: Whereas The Team’s defense was one of the worst all-around defenses last week, the Bengals’ defense actually played quite well. That is, outside of severe deficiencies in run defense that will most definitely extend to the regular season. Where things get interesting centers on how Fountain was shifted across the formation. He’ll see plenty of snaps across from a variety of struggling Cincinnati corners Friday night.

Good luck if you are determined to track down reliable training camp information on Trenton Irwin other than a few glimpses. A lack of beat writer information certainly didn’t get in the way of Irwin leading the WR corps in total snaps (30), routes (17), targets (5), receptions (3), and receiving yards (35). And his dedicated role in the slot will pit him across from the struggling Darryl Roberts.

The Bottom Line: As has already been explained in his write-up above, Brandon Allen shreds Cover 3. And the WR that will likely see the first allotment of routes out of the slot after Tyler Boyd takes a seat is Irwin.

KeeSean Johnson played a staggering 53 snaps last week against Dallas. He was on the field more than all but one offensive lineman!

The Bottom Line: That involvement is the good news. The bad news is he did next to nothing with the opportunity. And the Chiefs play some damn fine coverage. As you might be able to notice, the quality options at WR on the Friday night slate are far from obvious.

The first week of the preseason didn’t quite go as I planned for Dyami Brown. Even though he played the fourth-most snaps among WRs (25) and tied for the lead in targets (4), he only generated 16 yards. That said, the commencement of the competition between Kyle Allen and Taylor Heinicke for the QB2 role could reasonably result in some fireworks.

The Bottom Line: Even if only one of the two QBs gets it going, it’s not as though Washington is gifted with an array of talented WRs outside of their first-stringers. Brown is the favorite to land the WR3 role, but he will get plenty of run on Friday to prove he can translate those practice results onto the live stage.

Noah Gray was the talk of OTAs and camp. He still is, in fact. He just didn’t carry that momentum into the first week of the preseason. He finished second among team receivers in snaps (33), first in routes (21), but only a single target. It just so happens that he dropped that ball.

The Bottom Line: If we were overwhelmed by a massive armada of quality TE options, passing on Gray Friday night would be the call. We are not. And Gray, should he remember to pack the game that has been paraded about town, may offer the highest ceiling of any TE on the slate.

Who is the TE who offers the second-highest ceiling? It just so happens that he is also found on the KC roster: Jody/Joe Fortson. Another of the TE converts, Fortson shifted his talents inline after his career seemed to be in danger of fizzling out at WR. The results have been promising.