Hello and welcome to the Week 5 Sunday AM Update. What is this article? Mostly it’s a follow-up to yesterday’s big DFS piece – Scott Barrett’s Week 5 DFS Breakdown. But this article should also offer some utility for redraft and dynasty players.

Each week I’ll be breaking down the key injuries, news, and notes from Saturday / Sunday and will be updating this article up until kickoff (1PM EST). And I’ll also be providing a sort of TL;DR to yesterday’s big DFS article. Who are my core cash game plays? You can find that at the end of the article.

- Per Zach Bermam of The Athletic: “Schwartz could have Slay follow Diontae Johnson, but it’s more likely he’ll stick to the left side as he did against the 49ers.” Greg Cosell and Adam Caplan were uncertain of this as well. I’ve slowly been adding Johnson back into some of my lineups.

- Raiders WR Henry Ruggs is QUESTIONABLE but EXPECTED TO PLAY. WR Bryan Edwards is OUT.

- 49ers RB Raheem Mostert is EXPECTED TO PLAY. He practiced all week but only in a limited capacity. RB Tevin Coleman is OUT.

- Bengals RB Joe Mixon is QUESTIONABLE but LIKELY TO PLAY. He put together a full practice on Wednesday, but was limited on Thursday and Frida.

- 49ers WR Deebo Samuel is QUESTIONABLE but EXPECTED TO PLAY. He ran just 16 routes (of a potential 51) last week.

- Browns TE David Njoku is expected to be activated for Sunday’s game.

- Jets WR Breshad Perriman is DOUBTFUL and NOT EXPECTED TO PLAY.

- Jets QB Sam Darnold is OUT, replaced by QB Joe Flacco. It’s unclear to me who the primary beneficiaries of this replacement might be, but this does hurt WR Jamison Crowder the most.

- Eagles WRs DeSean Jackson and Alshon Jeffery are OUT.

- Panthers RB Reggie Bonnafon is OUT. This boosts RB Mike Davis -- Bonnafon was averaging 7.0 touches per game over the last two weeks, Trenton Cannon is the only other active RB on the roster.

- According to our Ownership Projections, powered by FanShare, the highest-owned players are likely to be:

Shout out to our DFS Optimizer, which spit this out as the top DraftKings lineup after making only one change. This is a very strong cash lineup, and would be a great core for tournaments (where, in order to raise your ceiling, you’d want to stack your QB with at least one receiver and maybe also run it back with a player from the opposition): 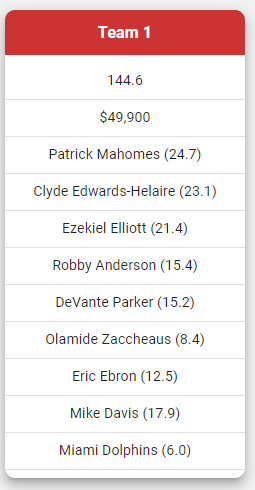 I think all cash game lineups are going to look sort of the same this week, at least on DraftKings:

QB: Expensive Option (possibly one stacked with one of the following RBs)

That might not necessarily be my build, but I think that’s going to be the far majority of builds.

It seems like the games (and game stacks) drawing the most ownership will be NYG/DAL and CAR/ATL. I’m likely to be a lot lower owned on those games than the rest of the field. KC/LVR, BAL/CIN, and HOU/JAX are far more intriguing to me.

I will have at least a few lineups stacking those games, and a good amount of exposure to pieces in those games, but I expect to be far lower owned than the rest of the field.

Fading NYG/DAL is easy. You just play Zeke and then wash your hands of the game. Maybe Darius Slayton for the bring-back on at least a couple of those lineups.

Fading CAR/ATL is harder to do. There are some concerns -- Julio Jones sitting out would impact the total, Carolina’s defense has been a little bit better than was to be expected, and ultimately you’re banking on a Teddy Bridgewater-led offense without Christian McCaffrey. But still, it’s tough. Mike Davis legitimately might be the best overall RB play on the slate. Robby Anderson has been hyped up as a top play in nearly every article we’ve posted this week, and he’s drawing massive ownership. Take out Week 4, and Calvin Ridley is looking like one of the most valuable players in fantasy. Olamide Zaccheaus is a fine play, but maybe not in tournaments like the Millionaire Maker where you really need every player rostered to post a monster game. So, I’ll be exposed to this game, but I at least won’t be gamestacking it as much as the rest of the field.

KC/LVR is a tough game to stack. I think the priority is something like Patrick Mahomes plus Tyreek Hill plus Darren Waller, but Clyde Edwards-Helaire, Travis Kelce, Henry Ruggs, and even Sammy Watkins are in play. Maybe Josh Jacobs and Mecole Hardman too.

The HOU/JAX stack is obvious -- Watson plus Will Fuller (maybe double-stacked with Brandin Cooks) and run back with either D.J. Chark or James Robinson.

A BAL/CIN game stack is basically banking on Baltimore’s RBs not going nuclear. Maybe that’s the most likely outcomes, but if they fail, just know this game will be ripe with slate-breaking potential. Wes Huber and I both already spent a great deal of time on this game in other articles, but the stacking options would be Marquise Brown, Tyler Boyd, Tee Higgins, and Mark Andrews. I also gave some love to Joe Mixon as a contrarian play in yesterday’s article.

If looking to go even more contrarian / to gain leverage on the rest of the field:

With Mike Davis (26%), Ezekiel Elliott (26%), and Clyde Edwards-Helaire (24%) looking so chalky, it might be worth bumping exposure to Kareem Hunt (16%), James Robinson (18%), Antonio Gibson (7%), and James Conner (6%) in certain spots / on certain lineups / in certain tournaments. Read the analysis in yesterday’s article to get a firmer grasp on upside and expectations.

QB should be obvious from yesterday’s article, but for tournaments, just make sure you’re stacking whichever QB you play with at least one of his receivers and someone from the opposing team.

For WRs (in tournaments) -- because that position is so volatile and high variant -- I try to minimize exposure to any one guy, and sort of hedge my bets that way. Again, it should be obvious who I like from yesterday’s article who I like, and I gave you a number of names likely to be less than 10% owned.