My power ratings are designed to be a starting point for point-spread betting between two teams. They take into account recent performances, long-term injuries, coaching, and strength of schedule. These ratings are intended to help predict performances in the present, but they’re not necessarily predictive for the rest of the season. I will take my Power Ratings into account when I make my weekly against the spread picks for the week, but I’ll also consider current injury reports, home-field advantage, weather, and other factors that may be relevant. I hope you find these ratings useful and good luck with your wagers!

On a related note, I’m baking in a one and a half to two-point advantage for home teams heading into the season until I get a better idea for how big of an advantage home teams are getting with limited or no fans in the stands. 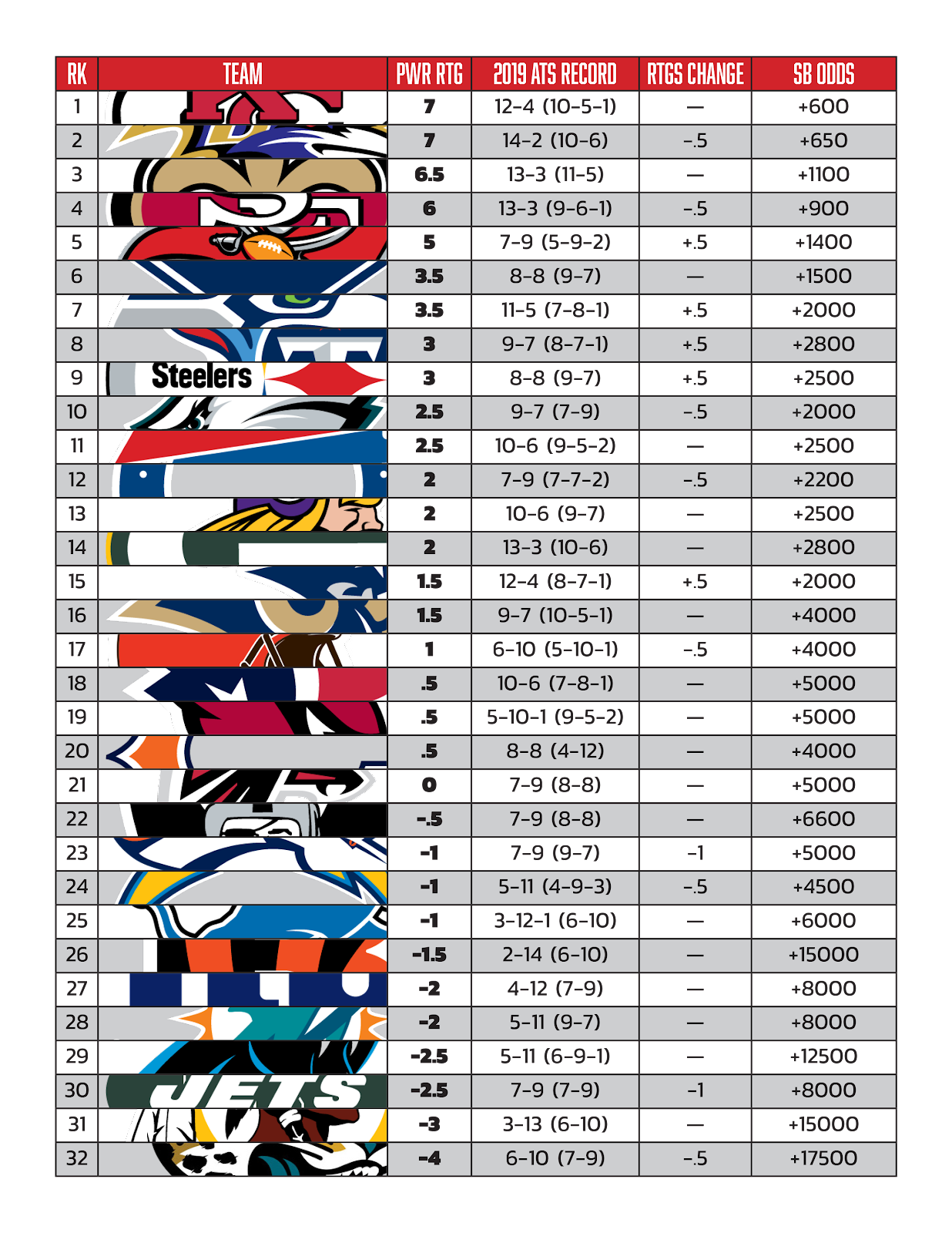 Teams who improved from the last Power Ratings update on May 26.

Seattle Seahawks (3 to 3.5) — The Seahawks traded for one of the league’s best safeties in Jamal Adams at the end of July, which will be a big boost for this defense. Adams will immediately solidify the Seahawks secondary, and DC Ken Norton will be able to deploy Adams all over the field in coverage, as a run stopper, and as a pass rusher.

Tennessee Titans (2.5 to 3) — I’ve been higher than most on the Titans heading into the season, and I’ve thought the wrong team has been favored to win the AFC South all summer. The Titans got a late boost up my rankings after they landed the last big fish still in the pond by signing DL Jadeveon Clowney to further strengthen an already strong defensive line.

Pittsburgh Steelers (2.5 to 3) — The Steelers had a positive training camp from all reports, and it all starts at the quarterback position with a once again healthy Ben Roethlisberger. Big Ben told Yahoo’s Terez Paylor that he played through elbow pain for the last “13, 14 years,” and he picked a good time to have his arm back to full strength. His receiving corps could be one of his deepest in years with Chase Claypool and Eric Ebron generating buzz in camp.

New England Patriots (1 to 1.5) — The Patriots significantly upgraded their quarterback situation by signing Cam Newton off the couch this summer. New England only received a half-point bump up in my ratings, though, after they got hit hard by a league-high eight players opting out over COVID-19 concerns. I’m a little lower than most on the Patriots heading into the season due to major concerns with their skill players and a potential regression for a defense that’s been hit hard by departures.

Teams who worsened from the last Power Ratings update on May 26.

Baltimore Ravens (7.5 to 7) — I initially had the Ravens as my top team entering the summer because of the overall depth of their roster heading into a season with COVID-19 concerns, but I slid them slightly behind the Chiefs heading into Week 1. The big reason for their drop was the team’s decision to cut FS Earl Thomas, who remained one of the league’s best safeties entering his age-31 season.

San Francisco 49ers (6.5 to 6) — Our John Hansen handles the vibes on the site, but I don’t have a great feeling about the 49ers’ chances of staying at the top of the NFC. They’ve been hit hard by WR injuries this summer, which is a bit troublesome since they’re unlikely to maintain their blistering pace on the ground this season. The NFC West is going to be one of the best divisions in the league, and I wouldn’t be shocked if the 49ers experienced a Super Bowl hangover this season.

Philadelphia Eagles (3 to 2.5) — The Eagles offensive roster is already getting stretched thin with Jalen Reagor (shoulder) joining Alshon Jeffery (Lisfranc) on the shelf for potentially the first couple of games of the season. The Eagles also lost left tackle Andre Dillard (biceps) for the season as he joined All-Pro RG Brandon Brooks on the season-ending injured reserve. The Eagles’ margin for error is much smaller now if the Eagles suffer another injury to their receiving corps and/or their O-line.

Indianapolis Colts (2.5 to 2) — The Colts didn’t get any worse during training camp, but I’m starting to get a bit concerned with quarterback Philip Rivers the closer we get to the season. Rivers will need to rein himself in this year after averaging 18.7 turnovers per season since 2011. His reckless playing style is a big reason why he owns the NFL record with 63 one-score losses, which includes 33 one-score losses since 2015 — or 6.6 one-score losses per season in that span.

Cleveland Browns (1.5 to 1) — I already had some concerns about Cleveland’s defense heading into the season and that was before they got hit hard by injuries during training camp with LB Mack Wilson (knee), CB Greedy Williams (shoulder), and S Grant Delpit (Achilles, IR) suffering significant injuries. The Browns did address Delpit’s loss by trading a fifth-round pick for Ronnie Harrison, but I still have my concerns with this defense.

Denver Broncos (0 to -1) — The Broncos received one of the larger drops I’ll give for losing a non-QB as Von Miller will, unfortunately, need season-ending ankle surgery for a freak injury at the end of practice on Sept. 8. We also learned that Miller’s passing rushing partner Bradley Chubb could be limited at the start of the year as he returns after his 2019 ACL tear. HC Vic Fangio relies on his front four to create pressure to allow him to disguise his coverages on the back end so the foundation of this defense could be shattered.

Los Angeles Chargers (-.5 to -1) — I’m lower than the market on the Chargers heading into the season, and I’m not feeling much better about them after they lost stud safety Derwin James (knee, IR) for the season. WR Mike Williams (shoulder) could also miss time early in the season and the Chargers have an incredibly thin WR corps behind Williams and Keenan Allen.

New York Jets (-1.5 to -2.5) — The Jets, specifically their defense, lost some steam heading into the season, and I now have them power-rated ahead of only the Jaguars and the Redskins. This defense could really stink after LB C.J. Mosley opted out for the season, and after they traded away S Jamal Adams for two future first-round picks and a third-round pick.

Jacksonville Jaguars (-3.5 to -4) — The Jaguars put a little more distance between themselves and the rest of the league in the race to the bottom for the right to choose between college QBs Trevor Lawrence, Justin Fields, and Trey Lance. I already had baked in Yannick Ngakoue’s departure into their initial power rating, and the franchise signaled that no player was safe when they cut Leonard Fournette and they traded Ronnie Harrison for a pick.