Can we go back to Week 1, when everyone and their teammate didn't get hurt? I got hit hard this week, as I'm sure many of you did. I've been playing fantasy football for almost 20 years, and I don't remember a week so riddled with injuries in those 20 years.

If you were following the injury sub-category of the discord, Doc was extremely busy this week. My teams are in shambles but it's ok… the team here at Fantasy Points put together a great Waiver Wire article to help us weather the storm. Last week's Balling On A Budget pick, Jerick McKinnon, makes the list. It may be a great selling point, if he produces this week.

Although our season-long teams may be in rough shape after this week, there's still money to be made on cards. Let's see what the big risers of the week were.

Reminder: We love StarStock.com’s vault of over 100,000 cards. If you want just one resource for options, purchasing, and organization, they’re the site to check out. Images and stock prices courtesy StarStock. 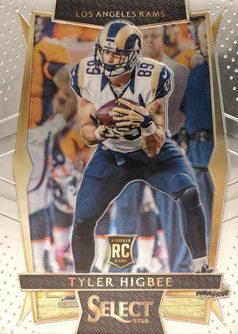 Whoa. 5 Receptions for 54 yards and 3 TDs. Higbee certainly didn't disappoint anyone who started him in season-long or DFS. Nor did he disappoint anyone sitting on his cards. 8 receptions in 2 weeks and heavily involved in the red zone, Higbee seems to be the real deal this year. 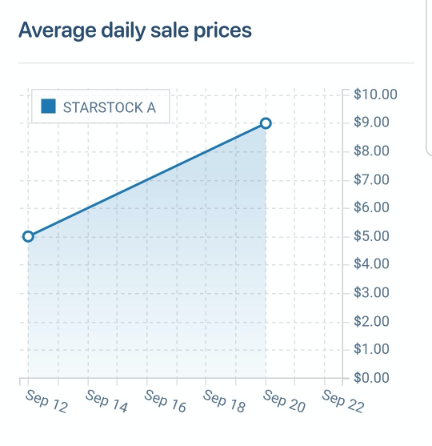 He saw his Select cards almost double this week. There aren't a lot of Higbee cards on StarStock currently, but the ones that were on there, are selling fast. I cannot stress this enough. If you have rookie cards that meet the criteria, you need to send them to StarStock. You pay fewer fees than eBay, the cards sell for a premium over eBay, and you don't have to worry about shipping when a card sells. If you have any questions, you can find me in the Fantasy Points Discord. 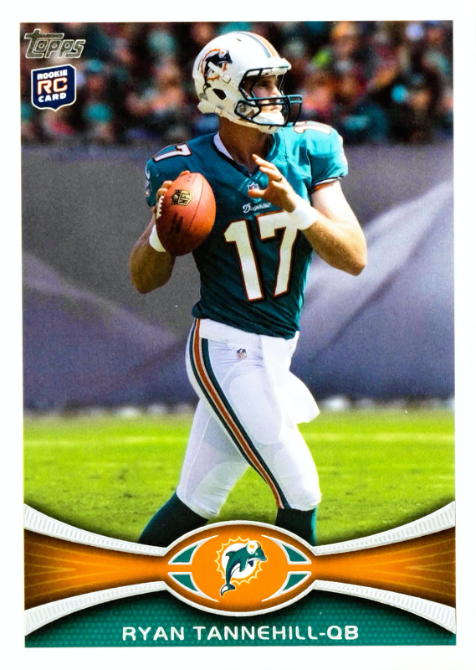 The Titans are 2-0, and if you're a Derrick Henry owner, you know it's not necessarily because of him. Through 2 games Tannehill has 488 passing yards, 6 TDs and 0 Interceptions. For those keeping track at home, that's pretty good. 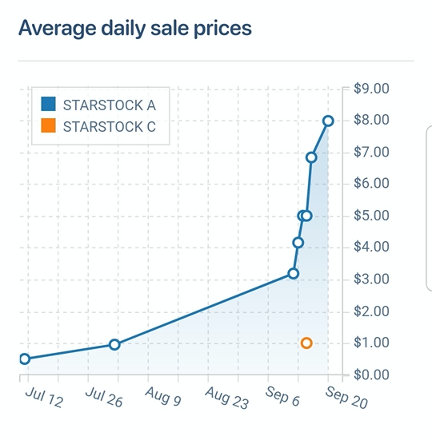 Over the last 2 weeks, Tannehill's Topps is up almost 300%. If he continues playing like he's been, they will continue to rise. With the prices where they currently are, in my opinion, he's still a buy. 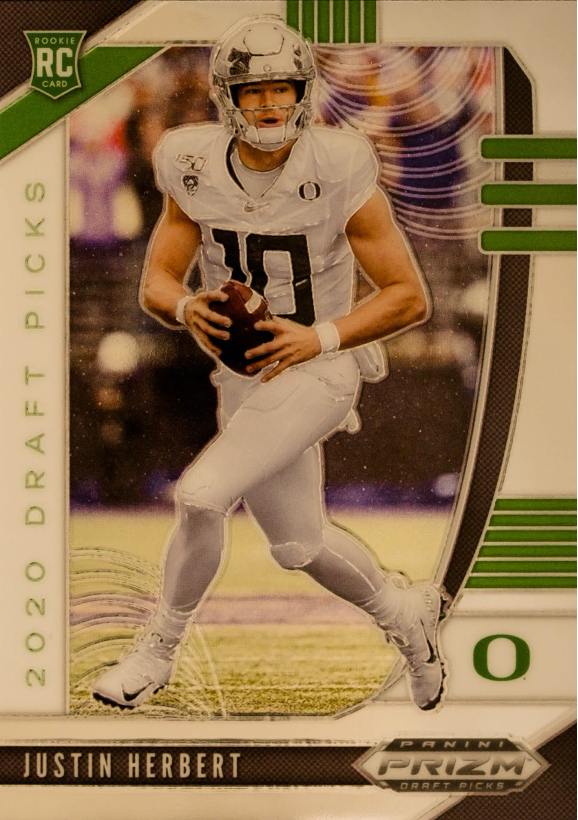 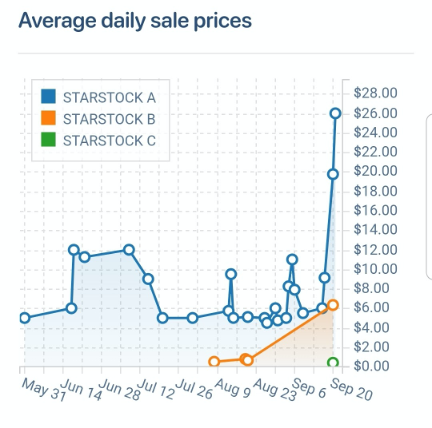 I'll be honest, Herbert blew my expectations out of the water. What a game! First career game and he took the Chiefs to OT. His prices grew almost 500% on his Collegiate Prizm. DO NOT buy this card. Once the NFL version of Prizm releases the collegiate prices will drop, just about instantly. If you want to pick up a card of his, just go with Donruss for right now, since he's actually in Chargers uniform in the picture. 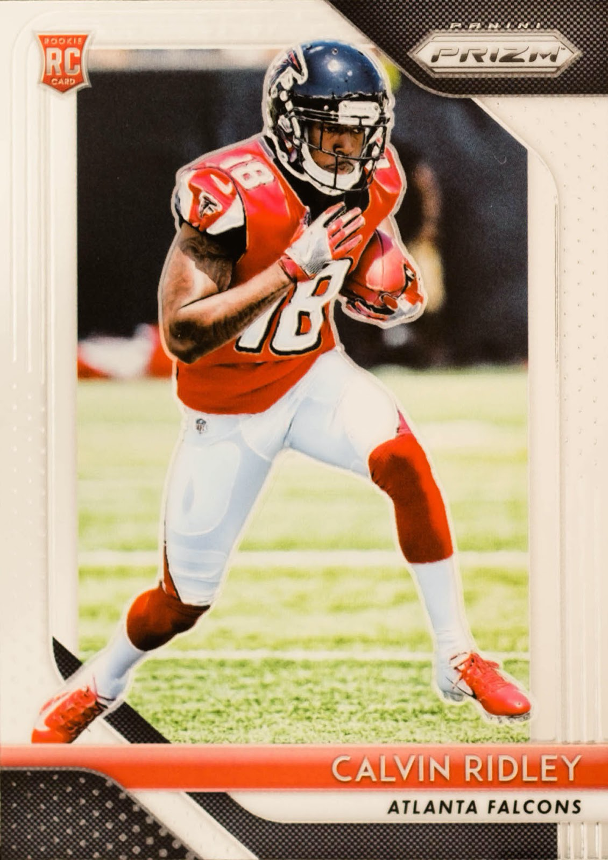 Matt Ryan loves to air the ball out, that's no secret, and if Ridley continues to outshine Julio, people will start to pay more for his Prizm. I think his cards are even undervalued on Star Stock let alone other platforms. If his prices hit $75+ by the end of season, I would not be surprised at all.

HOMER PICK! Yes, I'm a Raiders fan (What a win vs the Saints!) But, I still think Carr is undervalued. Fun fact, Carr is the reason I went from Collector to Investor/ Flipper. I had a HUGE Carr PC, but when he had his MVP run in 2017, I cashed out. It was hard to turn down 10x+ prices over what I paid.

Let's be honest, Carr and the Raiders have been a disappointment since that 2017 season. Raiders have one of the biggest fan bases in football, but a lot disappear when the team isn't doing well. If the Raiders are knocking on the playoff door come week 12, those fans will reemerge, and start picking up cards of their quarterback, as they did in 2017. Ideally, Gruden wants to run the ball as much as possible, but I think the D is too young yet to make that a reality. Translation: Carr's gonna have to throw to win games.

He had 3 carries for 6 yards and 0 receptions week 1. Nothing to get excited about. But in Week 2, both Cam Akers and Malcolm Brown got hurt and Henderson had 12 rushes for 81 yards and a TD. Henderson also had 2 receptions for 40 yards.

Sean McVay said that both Brown and Akers might play through the injury again this week. Mcvay also praised Henderson's performance on Sunday, rightfully so, he was the best looking overall RB, on the Rams, Sunday. 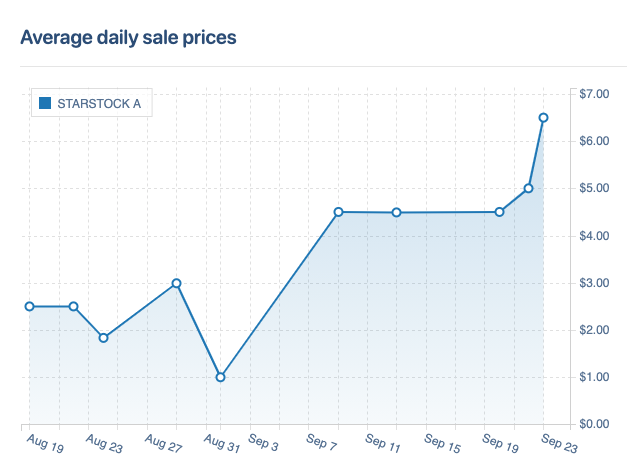 Kenny Golladay, again? Yes, Kenny Golladay again. I told you, he's arguably my favorite Wide Receiver in the NFL. I've been hyping Golladay since before I started writing for Fantasy points. It looks like he may finally make his season debut this week and I cannot wait. The Lions are clearly missing him, and he'll likely have an instant impact. This is probably going to be the last week for you to pick up his cards for "cheap." 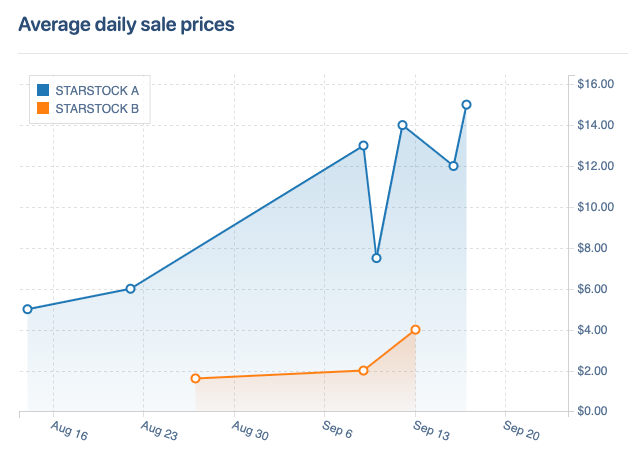 Balling On A Budget

This category is for cards under $2. Any Prizm, Optic, or Select you want to pick up. Keeping it under $2 shouldn't be a problem.

Since 2018 Ito has a total of 118 carries. That's it. But he's averaged 3.8 YPC on those touches. Doc touched on the Gurley injury history, and how Ito could see an increased role in that event, early in the preseason. Ito's role already grew in Week 2 seeing 5 carries vs Week 1 when he only saw 1. Not a big workload but a growing one nonetheless.

For what Ito cards are currently selling for, he's a low risk, medium reward candidate. His prices could rise 5-10x and still be relatively cheap.

It was a down week for releases this week. But next week there are a few new products that are coming out. For now, this week, Donruss and Mosaic have hit retail shelves.

Hobby boxes are selling for over $200, so if you can find these in the wild for $19.99 they're absolutely worth picking up. You're not going to be able to flip them sealed for much (If you're willing to keep them sealed over a year, that's a different story). But if you want to open something cheap, there's no better option than Donruss. This loaded QB rookie class makes opening any retail worthwhile.

This is the one you want to find at the store. If you find these for $19.99, I can't stress this enough: buy them all.

Hobby boxes are selling for almost $800. Blasters at $19.99 are a no-brainer especially when they're selling sealed for $75+ on the secondary. If by freak chance you find some in the wild, again: buy them all…sell enough sealed boxes to pay for everything. Then rip a couple and sit on a couple. Sitting on unopened wax takes a lot of willpower, I'm not going to lie. When it comes to cards, there's no better investment than sealed wax.