This is a complex case study when it comes to analyzing injury risk. Part of the complexity lies in clinical and statistical patterns. Most of it is because of how damn good he is when active. To visualize exactly how good Cook is when he’s healthy, for the first ten games of the 2019, I created what’s called a box and whisker plot for Cook, Ezekiel Elliot, Derrick Henry, and Aaron Jones. For a detailed description, click here. 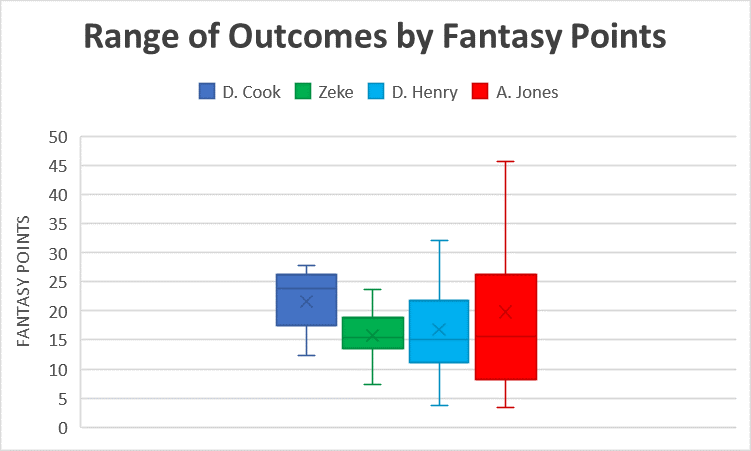 Worded in fantasy terms, the shaded boxes represent each players’ statistical floor and ceiling while the top and bottom dashes are statistical outliers. The “X” is the players’ average, and the line through the shaded portion of the boxes is the players’ median. So, Aaron Jones had the widest average range of outcomes, as he was liable for scoring anywhere from eight fantasy points to 26 in any given week. Conversely, Zeke had the narrowest range of outcomes making him the most consistent performer of the group with a floor of 15 points and a ceiling of 19.

What stands out is Cook’s combination of floor, ceiling, and median. Fantasy managers could count on him scoring at least 18 points during this time with a ceiling of 26. Furthermore, half of his games during this time were north of 23.9 points. The next best median is Jones’ at 15. For context, McCaffrey is the only player with a better mark over that time with a median of 24.4 fantasy points per game edging out Cook by 0.5 points. In short: Dalvin Cook was a beast when healthy because of his high floor, high ceiling, and consistent range of outcomes.

Here is the full list of his major injuries since 2014: 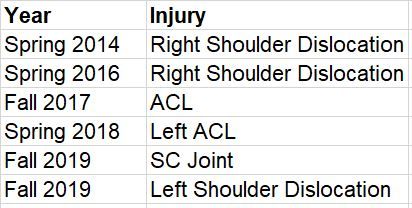 The elephant in the room is the recurrent shoulder dislocations that reportedly started in high school. A way to visualize the anatomy of the shoulder is to picture a golf ball on a tee. The golf ball represents the head of the humerus (arm bone) while the tee represents the glenoid (shoulder socket). When the shoulder dislocates, it damages the connective tissue that holds it all together. Cook has three documented dislocations, and to my knowledge, he has not had surgery to repair the left shoulder from the latest 2019 incident. The reality is that many people with recurrent shoulder issues tend to have constant subluxations (dislocations that relocate without assistance). Those kinds of subluxations wouldn’t show up on the injury report but do contribute to the damage.

Aside from the dislocation, Cook also suffered an obscure injury last year to the sternoclavicular joint (SCJ.). This is the joint where the clavicle bone meets the chest. More commonly, the acromioclavicular joint (ACJ) is what players tend to damage (think James Conner, Dak Prescott). It’s important to emphasize that generally speaking, the SCJ is almost completely immobile, so disrupting the connective tissue enough to cause joint translation and pain is intriguing to say the least.

Of course, there’s no ignoring the ACL tear from 2017, but with a recurrence rate of just 18% and the fact that ACL grafts are fully mature at 12-16 months, this isn’t the primary concern with Cook. However, the ACL is connective tissue like the rest of his severe injuries. Could he have some sort of underlying connective tissue dysfunction leading to these specific types of injuries?

Lastly, it’s impossible to ignore the fact that Cook also has a history of soft tissue strains which is the biggest risk factor in predicting another soft tissue strain. For more on that, read here. His previous strains were secondary to his body adjusting to the new ACL, but they’re a part of his history nonetheless. If he has another, he could miss up to two weeks and/or see a dip in production.

NFL players who do not have surgery to reconstruct the connective tissue damaged after a shoulder dislocation tend to dislocate again within 15 weeks and do so at an insane 55% clip. Perhaps not ironically, Cook dislocated his left shoulder in 2019 during Week 15 against the Chargers. Similarly, another study found that 42% of NCAA players who suffered a shoulder dislocation but didn’t have surgery re-dislocated the shoulder in the NFL. In other words, Cook theoretically has a 42-55% chance to re-dislocate his left shoulder. What’s worse is that players who do have a history of dislocations and get surgery still have a re-injury rate of 26%. Cook had right shoulder surgery for this exact reason while still at Florida State.

His chances of re-injury aren’t aided by the fact that shoulder injuries are the most common injuries among NFL RBs. If he does re-dislocate (not sublux), the median return to sport time is three weeks. This is what happened in 2019, and Cook returned to play after missing two weeks. If he dislocates the shoulder but relocates it without assistance (subluxes), the median return to play is zero weeks. However, it’s important to underline that each time Cook has a dislocation or subluxation, he’s damaging the labrum, the joint capsule, and the bone. If Cook continues to play through these chronic dislocations, surgery is inevitable, which will lead to him being shelved for the year. Furthermore, despite making it through 2020 without issues, this is an injury that doesn’t actually improve with exposures and over time - risk actually compounds.

Another shoulder dislocation would almost certainly lead to surgery meaning we wouldn’t see Cook again until 2022, and it would likely be with another team. Unless you carry Alexander Mattison, it’s time to make future plans as Cook’s value peaked around Week Ten of 2019. This means the inverse is true, as this is the lowest Mattison’s value will be making it the easiest time to acquire him.

If Dalvin Cook is there at the second pick, it’s awfully tempting to pass on him. I wouldn’t even necessarily advise it. However, if you’re all in on Cook 10/10 times, it’s prudent to be more conservative taking him 8/10 or 6/10 times in 2021.

As always, this is not a prediction of Dalvin Cook’s demise in 2021, it’s an assessment of the data from previous NFL players who possessed similar histories and injuries. From a practical standpoint, it’s apparent that Cook is a moderate to high injury risk for 2021 relative to his peers. Football is a violent sport, as only 2.3% of games are injury-free, but there’s always a chance Cook is injury-free in 2021 and continues to dominate. However, dynasty and redraft players alike who fancy themselves risk-averse are better off insulating themselves and *slightly* fading Cook due to the inherent volatility he brings due to his injury history.