The Broncos come into the 2020 season with a little bit of momentum after a 4-1 finish (3-2 against-the-spread) to last season after they inserted then-rookie Drew Lock into the lineup. GM John Elway loaded up on offensive talent this off-season to surround his rising second-year quarterback with this season. Denver missed the 2019 playoffs (-450 odds) after finishing the season with a 7-9 overall record and a 9-7 ATS mark, which included a 7-5/8-4 run in the final 12 games.

Denver finished with a 4-5 record in one-score games, which included three losses by single scores in the first four games with Joe Flacco at the helm, which put them behind the eight-ball before the calendar even flipped over to October. The Broncos finished 9-7 toward under totals last season after scoring the fifth-fewest points per game (17.6) and allowing the eighth-fewest PPG (19.8).

The Broncos are getting more love this summer after clearing their 2019 season win total (6.5) by a half a win. They squeaked out an over and avoided an under with a victory in their regular season finale against the Raiders. Denver’s 2020 season win total climbed by a full victory to seven and a half wins, and they’re +180 to make their first playoff appearance since Peyton Manning led them to the 2015 Super Bowl title. Entering training camp, I have the Broncos power rated as the 22nd-best team in the NFL (+5000 to win Super Bowl LV), as the 10th-best team in the AFC (+2200 to win the conference), and as the second-best team in the AFC West (+900).

The Broncos watched the division-rival Chiefs win the Super Bowl last season, and Kansas City is poised to have one of the best offenses in the league for years to come with Patrick Mahomes at the helm. The Broncos are going to have to score points to keep up with the Chiefs in the future, and GM John Elway joined the arms race by loading up on offensive weapons this off-season. 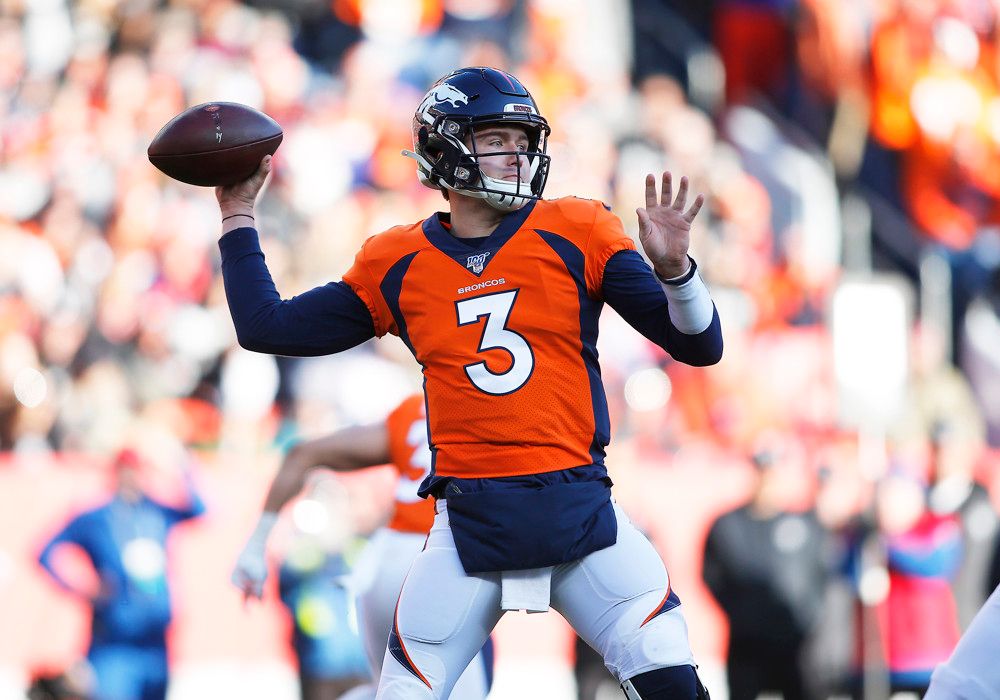 Drew Lock’s development in his second season will likely determine just how successful the Broncos are this season. Elway did all he could to help him succeed by drafting WRs Jerry Jeudy and K.J. Hamler with their first two picks to pair them with Courtland Sutton and Noah Fant next season. Lock has a chance to improve with his first full off-season as the team’s starter (well, as full as it can get this year), and the Broncos have a chance to be sneaky good if he can keep this offense on track because of their still strong defense. They also gave him an underrated bellcow back in Melvin Gordon to take some of the stress off of his shoulders this season.

The Broncos did lose top CB Chris Harris to another division-rival, the Chargers, but they added CB A.J. Bouye and DE Jurrell Casey for cheap this off-season, sending away a 2020 fourth-round pick (Bouye) and a seventh-round selection (Casey) for them. More importantly, they’ll get Bradley Chubb back this season after he played just four games last season before he tore his ACL. If Bradley is close to 100%, he’ll form one of the more formidable pass-rush combos with Von Miller this season after the two combined for 26.5 sacks together during their only full season together in 2018.

I’ve been reluctant to jump on the Drew Lock bandwagon, but the Broncos are going all-in on him with all of their offensive additions this off-season. Lock did better than the low expectations set for him during his five-game audition at the end of last season, but the team’s 4-1 record inflated his actual performance. He averaged 6.5 YPA and 204.0 passing yards per game, which doesn’t look as great when you consider the desirable stretch of pass defenses (vs. LAC, @Hou, @KC, vs. Det, vs. LV) he faced during that stretch.

The Broncos loaded up on offensive talent by drafting Jerry Jeudy and K.J. Hamler to give Lock a better chance to succeed in Year Two. They also brought in former Giants HC Pat Shurmur to be Lock’s offensive coordinator, and he’s coaxed some strong seasons out of lesser QB talents during his career. I like what the Broncos have done on paper, but implementing a new offense for the second straight year with a bunch of brand new weapons does give me pause for concern during an off-season unlike any other.

The Broncos also need A.J. Bouye to have a bounce-back campaign after his play fell off with the Jaguars last season. Denver let top CB Chris Harris walk to the Chargers this off-season, leaving their CB depth chart up in the air. Slot CB Bryce Callahan didn’t play a snap in his first season with the Broncos in 2019 because of a foot injury, and the Broncos will have a camp battle for the other perimeter CB spot across from Bouye. Denver’s cornerback play will likely determine just how good this defense can be this season for a fairly formidable group otherwise.

The Broncos didn’t get many favors when it came to their schedule. They open the season against the Titans and the Steelers in their two extra AFC games, and they have three different sets of back-to-back games in Weeks 4-5 (@NE, @NYJ), in Weeks 9-10 (@Atl, @LV) and in Weeks 13-14 (@KC, @Car). 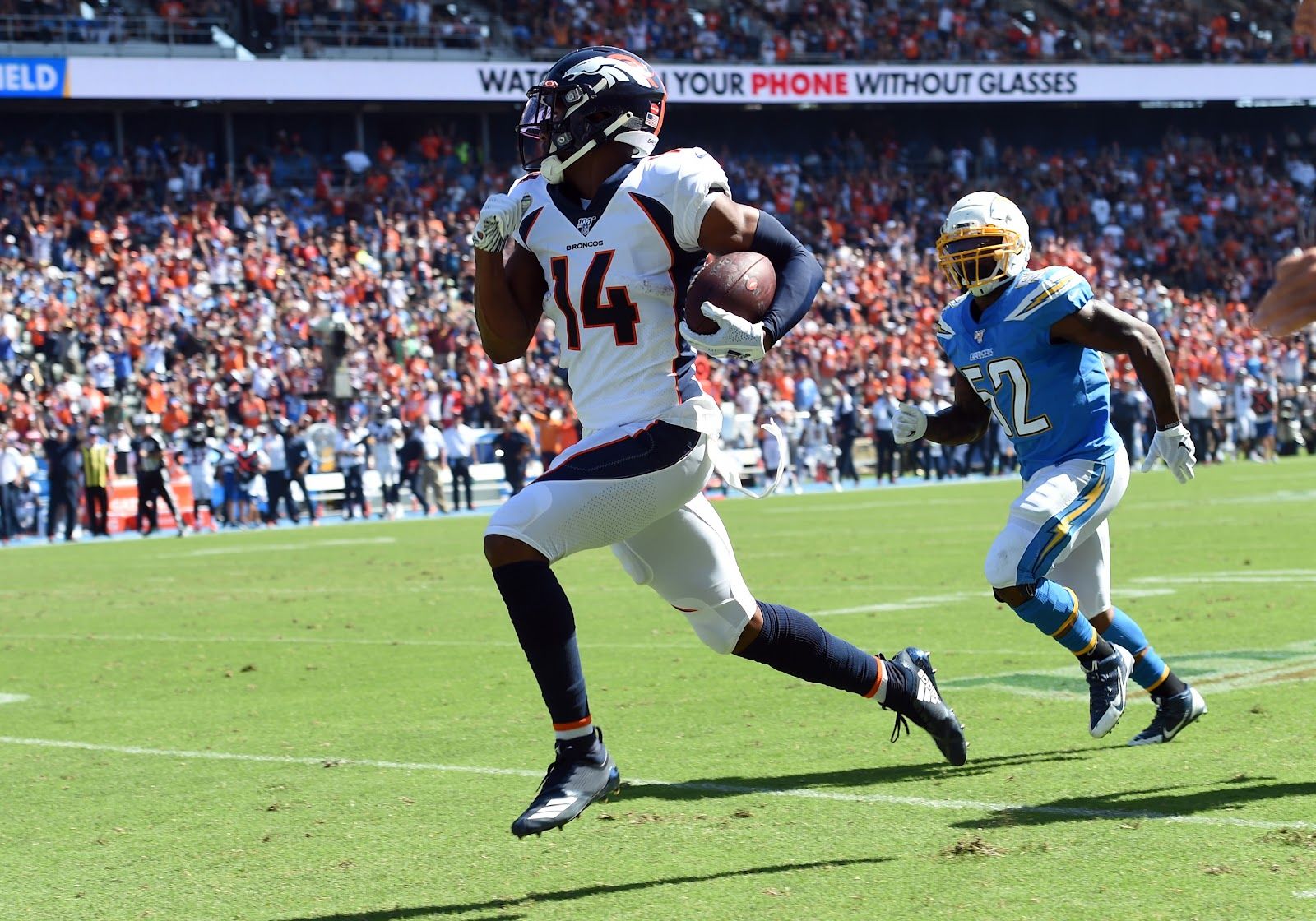 We’ve seen talented teams take big steps forward to the playoffs with inconsistent young quarterbacks in each of the last three seasons. The Bills and Josh Allen did it last season, the Bears and Mitchell Trubisky did it in 2018, and the Jaguars and Blake Bortles did it in 2017. Could Drew Lock and the Broncos be the next shaky QB/talented team combo to make the leap in 2020? I think there’s a solid chance they could do it, especially with two shaky divisional opponents in the Chargers and Raiders. I can’t put my full trust into Lock this season, especially since this new offense could have some growing pains early in the year because of a lack of an off-season, but I’m leaning Broncos over seven and a half wins.

My favorite team future involving the Broncos comes at a juicy +260 price as I’m wagering half of a unit on Denver to finish in second place in the AFC West. I’m pretty low on the Chargers and Raiders this season and, like everyone else, I think the Chiefs are the clear class of the division. This bet is my way of betting against the Chargers and Raiders while also betting on some progression for Lock and the Broncos all while risking a smaller amount for a bigger potential payout.

The Broncos signed Melvin Gordon to a significant chunk of money ($13.5 million guaranteed over two seasons) this off-season to give Lock another weapon. The fantasy public has a negative perception of Gordon after last year’s holdout and because Austin Ekeler outperformed him, but Gordon has bellcow potential as the clear top receiver and goal-line back in Denver. He’ll have to contend with Phillip Lindsay for carries this season, but it doesn’t make sense to give Gordon a large chunk of money if they weren’t planning on scaling back Lindsay’s role. Even with Ekeler playing a big role next to him the last two seasons, Gordon has per-16-game averages of 998 rushing yards and 524 receiving yards in that span. I’m betting one unit on Gordon to post more than 1050.5 rushing and receiving yards this season with our Fantasy Points projections forecasting 289.5 additional yards than his DraftKings total.

Leans: Broncos over seven and a half wins (-110, DraftKings)