Hello, and welcome to the Week 17 XFP Report. If you’re unfamiliar with XFP, I’ll get to that in a little bit.

Through 16 weeks of action, here are the top-25 players in expected fantasy points (XFP) per game: 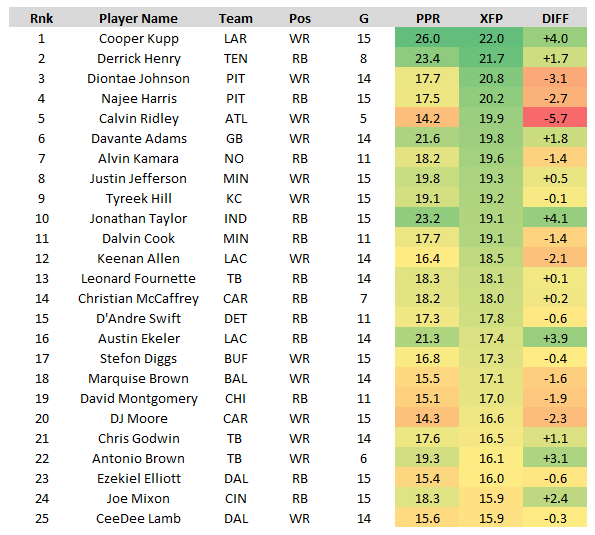 And it still seems as though there’s room for more. Chris Godwin and Mike Evans both played in five of Brown’s six games, forcing him into a part-time role, running a route on only 66% of the team’s dropbacks. But that number jumped to 84% last week with both WRs out. And Godwin is out for the rest of the season, while Evans is on the COVID-19 list and is not yet fully recovered from the hamstring injury which sidelined him last week.

In their absence, last week, Brown earned a 45% target share (10th-most by any player in any week this season), catching 10 of 15 targets for 101 yards. Most impressively, 71% of his targets came against Stephon Gilmore’s shadow coverage — Gilmore currently ranks as PFF’s 9th highest-graded CB in coverage.

This week, Brown faces a Jets defense that ranks 4th-worst in PFF coverage grade. They have no player of Gilmore’s caliber in their secondary. So, I suspect Tom Brady and Brown can and will do whatever they want this week. And, hopefully, that means winning you a championship.

And for those of you who don’t own Brown, or were already knocked out of the playoffs, he’s a near must-play in DFS this week, priced as just the WR18 on DraftKings ($6,100).

And Andrews continues to widen the gap. He’s finished as a top-5 fantasy TE in an astounding six of his last seven games. He’s seen at least 8 targets in each of his last nine games. And since Week 5, he averages 10.0 targets, 17.2 XFP/G, and 20.2 FPG. Those numbers lead all TEs over this span, and, among wide receivers, rank 9th-, 10th-, and 4th-best.

Even across the full season, Andrews would rank 7th among all wide receivers in FPG (17.7). There are few fantasy cheat codes as powerful as owning a fantasy TE who is putting up mid-range WR1-levels of production. So, it’s not surprising ESPN is showing Andrews to be the 2nd-most valuable commodity in all of fantasy, behind only Cooper Kupp.

And Lamar Jackson’s absence hasn’t slowed down Andrews at all. In fact, the reverse is true. Andrews has flashed an unreal ceiling this year, posting highs of 44.7, 38.6, 31.5, and 29.5 DK fantasy points. But the latter three scores have all come without Lamar Jackson.

And, so, maybe Andrews owners should be rooting against a quick return for Jackson. Jackson easily ranks worst in PFF pass grade since Week 6 (46.3), and Andrews is averaging 53% more fantasy points per route run without Jackson under center.

He’s run 64% of his routes from the slot over this span, and now gets a near-best possible slot matchup against the Seahawks. Seattle has given up the 6th-most FPG to opposing slot WRs (15.3), but they’re also the league’s top slot funnel defense, giving up a league-high 24% of their total receiving fantasy points allowed to slot WRs.

Ertz, like Mike Gesicki, has a TE-designation for fantasy but is basically an oversized full-time slot WR. He’s run a route on 83% of Arizona’s dropbacks over the last 8 weeks, with 63% of his catches coming from the slot.

And some of these numbers might be skewed against him, with Kyler Murray playing hurt and then missing time due to injury. And we should continue to expect a bit more from Ertz moving forward, with DeAndre Hopkins out for the remainder of the season and leaving behind an 18% target share.

Ertz is a decent value in DFS this week, priced as just the TE9 on DraftKings ($5,200), in a perfectly neutral matchup against the Cowboys.

(Julio Jones, meanwhile, remained a non-factor; earning just one target for the second week in a row.)

This was rare volume for any WR, but — (sadly) — especially for Brown, who, for whatever reason, has always had to make due with less. Or, at least, in contrast to the WRs as productive as he’s been.

Since entering the league, Brown has been the single-most efficient WR in fantasy, out-scoring his expectation (PAR) by +3.0 FPG, or 24%. He’s produced as a mid-range WR2, but on only mid-range WR4-levels of volume. Perhaps now we’ll finally see what he can do with high-end WR1-levels of volume.

Kupp not only leads all WRs in receptions, yards, and touchdowns — the esteemed triple crown — but he’s pacing the league (leading by 20% or more) in each stat, and, most importantly, by FPG. He averages 21% more FPG (+4.5) than the next-closest WR (Davante Adams).

At $9,500 on DraftKings, he’s (merely) priced like a high-end WR1, but nothing quite like a WR on pace for the single-greatest fantasy season of all-time. His 28.1 DK FPG leads all players at all positions (including QBs). And is also the most by any WR in any season all-time.

And 28.1 fantasy points seems like a low bar this week, given Kupp’s drool-inducing matchup. Over the last six weeks, opposing WR1s are averaging 24.3 FPG against Baltimore, though they collectively average just 14.7 FPG in all other games.

In DFS this week, he’s nearly a lock-button play.

Penny, clearly, isn’t a bell cow. And the volume he’s seeing hasn’t been great. But it also hasn’t seemed to really matter.

Although the disconnect between his XFP/G and FPG average makes me fearful of a looming regression to the mean, I doubt the regression will be coming this week. Seattle is favored by 7.0-points, against a Detroit defense that ranks 5th-worst in schedule-adjusted FPG allowed (+3.8) and 5th-worst in rushing FPG allowed (16.3).

Assuming Alex Collins is still out, Penny projects as a slight value on DraftKings, priced as the RB14 ($6,100).

After a Week 9 loss against the Ravens, Vikings OC Klint Kubiak said Justin Jefferson was “deserving of more targets.” And, well, Kubiak has been true to his word.

This week, Jefferson gets a Packers defense he demolished in Week 11, when he caught 8 of 10 targets for 169 yards and 2 scores.

Several weeks ago, we asked, “What’s wrong with David Montgomery?” And the answer was, “He’s not seeing the same target-volume he saw last year.” But that’s no longer the case. Now, in fact, he’s seeing the best target-volume of any RB in the league. Despite the handicap of a hyper-mobile QB — hyper-mobile QBs typically neglect their RBs in the passing game — Montgomery leads the position and leads his team in targets over the last four weeks (averaging 8.3 per game, up from 2.6 targets per game).

So, Montgomery is seeing the best volume of any RB in fantasy, and by a wide margin. And now he gets one of his softest matchups yet. The Bears are favored by 6.0-points against the Giants, who rank 8th-worst in schedule-adjusted FPG allowed to opposing RBs (+2.3), and 9th-worst in YPC allowed (4.47). 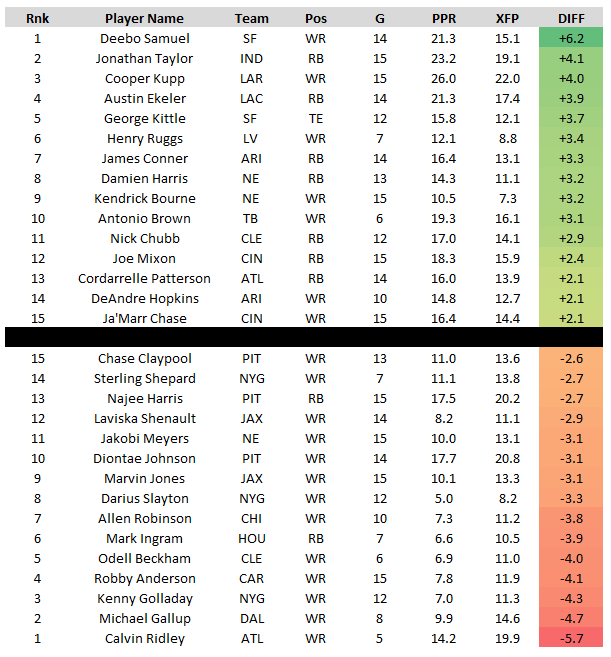