Luckily for our subscribers, we can answer all of these questions and more. But in order to do so, we first had to quantify strength of schedule. This is typically done by calculating a defense’s FPG average (allowed) and then looking at the average for all players over a full season. This will also be our approach; however, we’ll be taking things one step further – we’re going to use a control for the opposing offense by measuring FPG over an opponent’s average. 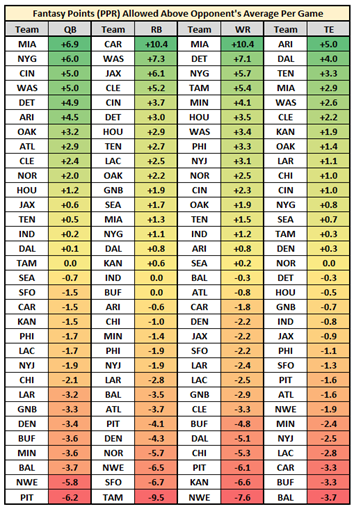 For instance, last season, opposing running backs averaged +10.4 fantasy points per game over their season-long average when facing Carolina, which ranked worst in the league. (Carolina was the most favorable fantasy matchup for opposing running backs, worth, on average, an additional 10.4 fantasy points per game.) On the opposite end of the spectrum, running backs fell short of their season-long average by 9.5 points when facing Tampa Bay, which ranked best in the league. (Tampa Bay was the toughest fantasy matchup for opposing running backs.) Calculating these numbers for all teams and then applying the full-season average for all players quantifies in real terms which players had the easiest and most difficult schedules for fantasy last year. We can also use these numbers to project out strength of schedule for each team and each position in 2020.

While this methodology isn’t perfect – of course roster turnover and coaching changes will complicate things – strength of schedule doesn’t not matter. This data is still far more actionable that it is not. In fantasy football, like poker, there may only be small edges to be gained, but those small edges can be compounded to yield a massive advantage. And they must be taken advantage of, and are by the most dominant players. That’s the case with strength of schedule – another small edge to be realized, and, actually, at the polar extremes, it might matter a lot more than you’d expect. Here’s an example: 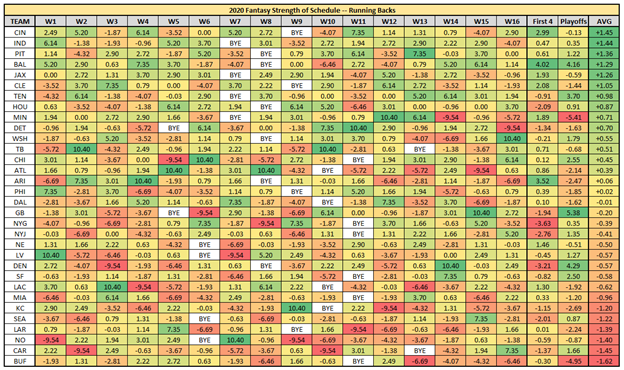 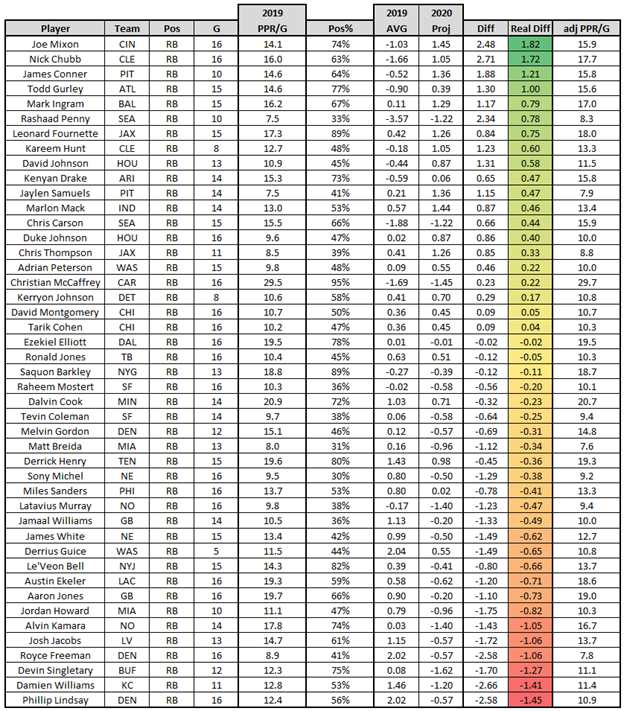 - No running back will benefit more from an improved schedule this season than Joe Mixon. (Explained in more detail in the introduction.)

- In 2019, Christian McCaffrey scored 471.2 fantasy points, or, the second-most by any player at any position in any season in NFL history. As monumental as that feat is, it becomes all the more impressive when factoring in that he had the league’s second-most difficult schedule (-1.69). A running back rarely scores all of his team’s running back fantasy points, but McCaffrey came close, generating 95% of Carolina’s fantasy points of the backfield. We could, using this methodology, say that with a neutral schedule, McCaffrey would have averaged (roughly) an additional 1.61 fantasy points per game (95% of 1.69) — or we could say McCaffrey averaged 31.1 schedule-adjusted fantasy points per game. In other words, with a neutral schedule, he might have bested LaDainian Tomlinson’s 2006 season (30.1) to score the most fantasy points by any player at any position all-time.

- Unfortunately for McCaffrey, he has the league’s second-toughest schedule again this season.

- Chris Carson’s schedule (-1.88) was actually slightly tougher than McCaffrey’s, ranking toughest-overall at the position. Only three of Carson’s 14 games were deemed favorable (better than neutral), and in those games, he totaled 25.9, 26.0, and 26.7 fantasy points. Across all other (full) games, Carson averaged only 14.1 fantasy points per game. His schedule is still tough (-1.22), but improved overall (+0.44).

- Nick Chubb goes from the third-toughest schedule in 2019 (-1.66) to the sixth-easiest in 2020 (+1.05). That’s good news, of course, though Chubb might still be a player to avoid at ADP (No. 12-overall). That’s because the bigger storyline for Chubb is Kareem Hunt. Chubb averaged 18.9 fantasy points per game through the first nine weeks of the season. Then Kareem Hunt returned from suspension. And, from that point on (Week 10-17), Chubb averaged just 13.0 fantasy points per game. Actually, Hunt out-scored Chubb in six of those eight games.

- James Conner is already one of my favorite injury discounts this season. Before missing time with a shoulder injury in Week 9 (an injury that plagued him for the remainder of the season) Conner ranked 10th in fantasy points per game, averaging 17.8. And before that, in 2018, he finished seventh, averaging 21.5. Combine that with the third-most-improved schedule (+1.21) and the third-easiest schedule (+1.36) at the position, and it’s clear he’s a screaming value at current ADP (RB22).

- Melvin Gordon’s schedule ranks 10th-toughest this season (-0.57), but he also has our second-most-favorable postseason schedule (+4.29). With underrated bellcow potential, Gordon is one of our favorite draft targets this season. However, given that he also has the second-toughest start to the season (-3.21), you might be better served targeting him as a buy-low guy via trade (in, let’s say, Week 5) rather than as a player to draft.

- Aaron Jones’ very favorable schedule last year (+0.90) is far more difficult this year (-0.20). On top of that, and true to HC Matt LaFleur’s words, Green Bay’s two-way committee might now be a three-way committee after the team selected RB A.J. Dillon in Round 2. Jones averaged 19.7 fantasy points per game last season, but that drops from 17.8 if we exclude games Jamaal Williams played one or fewer snaps. So, now, the regression looks to be even more severe. And he’s also the No. 1 touchdown regression candidate this year. It doesn’t matter nearly as much, but, I suppose, at least he does have the league’s most-attractive playoff schedule (+5.38).

- Derrick Henry has the fourth-best postseason schedule (+3.70) this year. This is interesting because Henry was already one of fantasy football’s most-dominant postseason scorers; and now with an ideal postseason schedule, that could be a deadly combination. Throughout his career, Henry averages just 8.6 FPG and 3.88 YPC in September and October. In December, he averages 17.4 FPGe and 5.38 YPC.

- Drafters high on rookies Jonathan Taylor and J.K. Dobbins are betting on talent, hoping their preferred rookie can break free from a committee backfield and eventually earn a lion’s share of the volume. If either bet pays off, it should pay off handsomely. Indianapolis has the second-softest schedule (+1.44), and Baltimore’s schedule ranks fourth-best (+1.29). However, Dobbins’ schedule might actually be more favorable, because it’s unlikely either running back breaks out in the first half, and Dobbins’ playoff schedule ranks third-best among all running backs (+4.16).

- Devin Singletary quietly led all 150-plus-carry running backs in YPC (5.13), but things look a lot less rosy this year following the arrival of Zack Moss (drafted on Day 2), in addition to the league’s second-toughest schedule this season (-4.95).

- Josh Jacobs went from having the league’s third-softest strength of schedule in 2019 (+1.15) to the 11th-toughest schedule (-0.57) in 2020. Though, interestingly, Jacobs was actually more productive in his tougher games last season. That’s because Jacobs was more gamescript-sensitive than matchup-sensitive. He averaged 20.8 fantasy points per game in victories (would have ranked third-most), but only 9.8 in losses (would have ranked 39th-most). After adding a pass-catching running back in Round 3 (Lynn Bowden), look for that trend to continue this season.

- Sony Michel and James White both have worse schedules this year than they had a season ago, though their fantasy strength of schedule might not matter as much as their real NFL strength of schedule (though they’re typically closely correlated for running backs). Last season, James White averaged 19.3 FPG in losses but only 11.2 FPG in victories. With Sony Michel, we see the opposite effect: +4.7 more fantasy points per game in victories. With Tom Brady out of the picture and New England’s schedule much tougher overall, White is the easy bet to lead the backfield in fantasy points. (We’ll have another article on gamescript-sensitivity and projected win-totals at a later date.)