“There’s a legitimate case to be made that six wide receivers in the 2020 draft class are better than any wide receiver in the 2019 class.” – Mike Renner (Lead Draft Analyst for PFF)

We’ve heard this sentiment echoed countless times all offseason – the 2020 wide receiver draft class has a chance to be historically great.

Okay, cool. But what if the 2019 draft class already was? The 2020 class really might be everything it’s been hyped up to be. But also, perhaps, all that hype has wrongly left the 2019 class underappreciated. Last season, rookie wide receivers totaled 11,849 receiving yards – or, the second-most by any rookie class in NFL history.

In dynasty leagues, the disrespect is glaring: four rookie wide receivers rank ahead of Terry McLaurin (by ADP), eight rank ahead of Marquise Brown, and 10 rank ahead of Diontae Johnson. In redraft leagues – amidst a pandemic-plagued offseason with less on-the-field practice time, which disproportionately harms rookies – this pricing inefficiency is just as apparent. 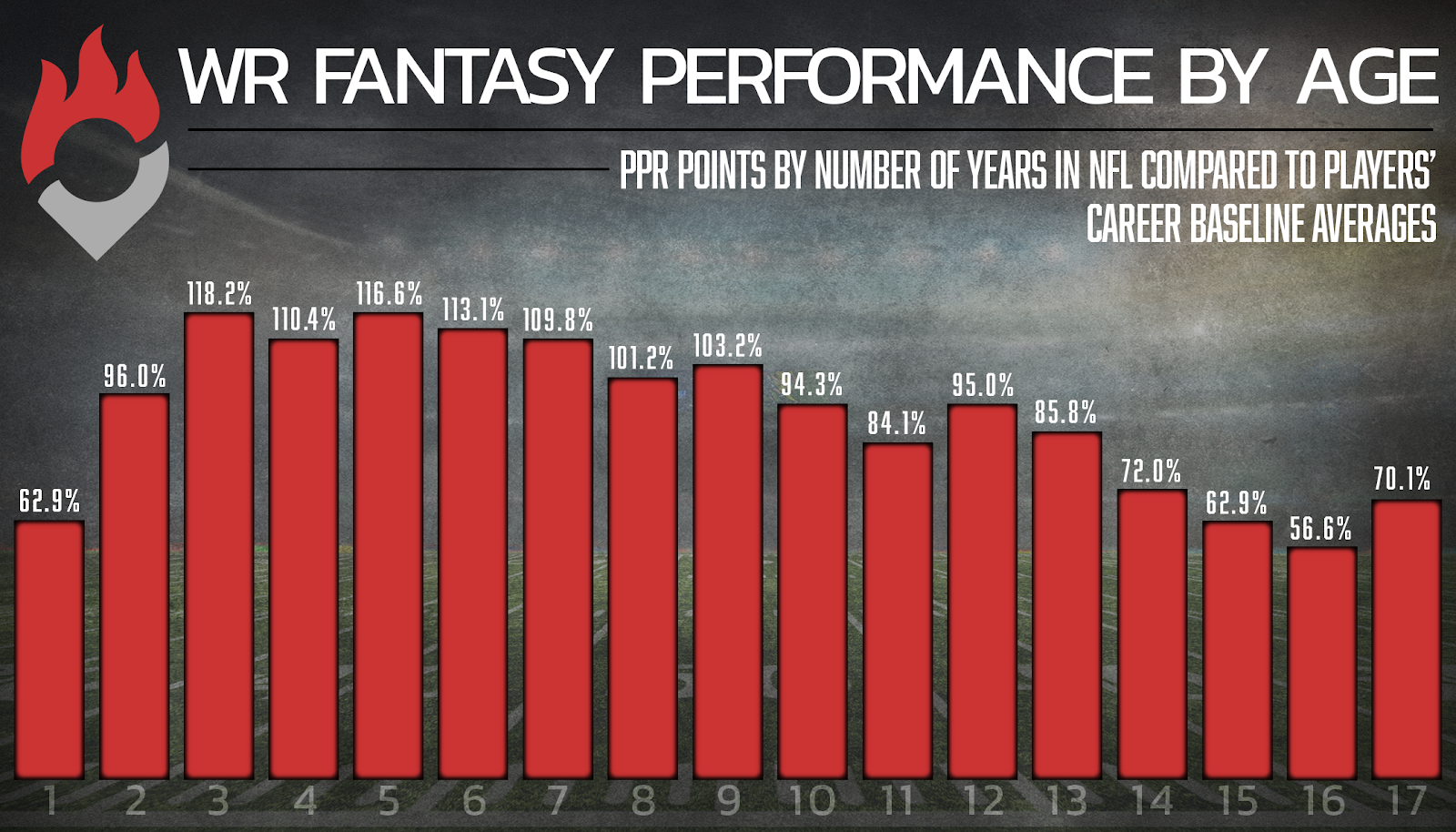 Or, look at the top names from 2015 – the only class to rank above 2019. In their rookie seasons, Odell Beckham Jr., Mike Evans, Davante Adams, Allen Robinson, Jarvis Landry, Sammy Watkins, Brandin Cooks, and John Brown collectively averaged 12.8 fantasy points per game. The next year they averaged 15.9.

- A.J. Brown is the most expensive wide receiver from the 2019 class, but not without good reason. Last year he averaged 2.67 yards per route run (per PFF), which led all rookies, and ranked second among all wide receivers. Yards per route run is one of the best and most-predictive stats in fantasy football, and his rookie season ranks highly among some of the league’s best wide receivers (as you can see above). 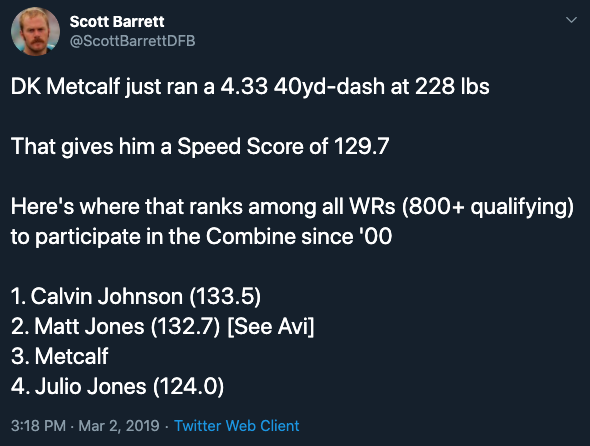 - From Week 10 until the end of the regular season, size/speed-freak D.K. Metcalf out-targeted Tyler Lockett 46 to 38. In the Wild Card Round of the playoffs against the Eagles, Metcalf totaled 160 receiving yards, the most ever by a rookie wide receiver in a postseason game.

- On 57 receptions, Deebo Samuel recorded 18 missed tackles and 484 yards after the catch. On a per-catch-basis, those numbers both ranked top-five by any 50-catch wide receiver this past decade.

- Before his injury, Preston Williams out-gained DeVante Parker 428 to 400, while also leading the team and all rookies in receptions (32).

- Hunter Renfrow ranked 11th of 131 wide receivers (or second among slot wide receivers) in yards per route run (2.09). He averaged 15.4 fantasy points per game from Week 8 until the end of the regular season, which ranked 17th-best.

- Steven Sims averaged 9.0 targets per game and 16.8 fantasy points per game over the final four weeks of the season. He appears locked into the No. 2 role in the passing game (behind McLaurin), and is basically free in best-ball leagues.

- From Week 10 on, Darius Slayton - an Adam Caplan favorite - ranked 16th in fantasy points per game (15.4), and well ahead of New York's other two wide receivers.

- Although N’Keal Harry (Round 1), Parris Campbell (Round 2), and Andy Isabella (Round 2) disappointed in their rookie seasons, all carry good draft capital and a strong collegiate profile. It’s not uncommon – actually, it’s fairly common (see: D.J. Chark, 2019) – for this type of player to unexpectedly breakout in Year 2. 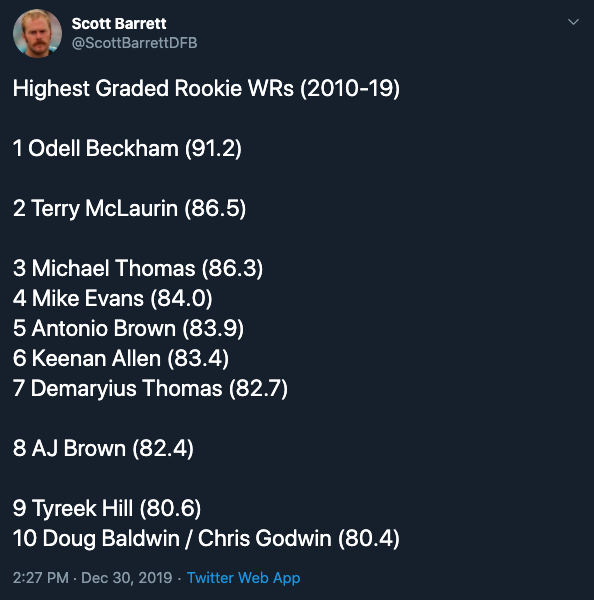 His numbers don’t necessarily jump off the page, but then again, Washington’s 2,812 passing yards ranked 10th-fewest this past decade. Adjusting for that, however, it’s clear McLaurin was every bit the part of a true WR1 – he accounted for 32.7% of Washington’s total passing yards in games active, which ranked fifth-most in the NFL and the most by any rookie since Odell Beckham Jr.

The over-arching analysis on McLaurin is easy: he’s a tremendous talent and must be viewed as such by fantasy drafters. Beyond that, things get murky. Washington’s offense is uninspiring and quarterback play is a concern (by nearly every measure Dwayne Haskins was arguably the league’s least-efficient passer). But at the same time, it’s hard to imagine things could be worse for Washington than a season ago (and, like receivers, rookie quarterbacks also improve dramatically in their sophomore seasons). Keep in mind, that’s barely priced into the equation. McLaurin is typically being drafted as the 27th wide receiver off the board, despite ranking 30th in FPG last season (13.7), granting us a high margin of safety on our investment.

If wide receivers were as volume-reliant for fantasy production as running backs, McLaurin would be the no-brainer must-draft pick of the century. This is a real stat: among all wide receivers and tight ends on Washington’s roster, only one other player has recorded at least 35 receptions in a single season (Richard Rodgers, 2015). Clearly, McLaurin is locked into the No. 1 role in the passing offense -- and without much target competition -- but he’s also the only player opposing defenses need to worry about, meaning it will be pretty easy for defensive coordinators to nuke his impact, as we saw with Julian Edelman and Courtland Sutton in the second half of last season.

Last season, according to PFF, Johnson was charted as open on 84% of his targets. That ranked second-best – behind only Michael Thomas – among all non-majority-slot wide receivers. Among all 63 wide receivers with an aDOT of 9.0 or higher, that led the league. According to Next Gen Stats, Johnson also led all wide receivers in average separation.

Although Johnson was getting separation at an elite level, Pittsburgh’s quarterbacks were playing at a Mark Sanchezian level, doing the rookie and his fantasy owners a grave disservice. Just 44% of Johnson’s targets were deemed accurate in 2019, which, in contrast to his expectation (based on aDOT), ranked fourth-worst of 82 qualifying wide receivers. With Ben Roethlisberger under center in 2020, look for target accuracy to improve, and for Johnson to make a massive jump in production.

Oh, and this is only looking at Johnson’s numbers before the catch. After the catch, once the ball was in his hands, Johnson led all wide receivers in missed tackles forced (18), despite ranking just 34th in receptions (59). Keep in mind, he did this as a rookie and oh my, will you look at that while playing through a sports hernia injury for the near-entirety of the season.

He's an immense value in redraft leagues, and, amidst reports that the Steelers are “not likely” to retain JuJu Smith-Schuster, instead choosing to let him walk in free agency next year, a must-draft player in dynasty leagues.

Brown was the first wide receiver drafted in 2019, and he probably had the best landing spot, but he finished the season just eighth in receiving yards (584). Sure, looking at the raw numbers, Brown’s rookie season might appear underwhelming, but on a per-route or per-target basis, his numbers were among the best in the league. And, I think that’s the larger story and something that needs to be prorated in a season marred by injury.

Following Lisfranc surgery in January of last year, Brown missed nearly all of Baltimore’s offseason (oftentimes a death knell for a rookie wideout), and then spent nine of 16 games on the injury report listed as questionable. During the regular season, he played on just 58% of Baltimore’s snaps when active. During the postseason, Brown finally appeared to be unleashed, playing on a season-high 85% of the snaps and turning 11 targets into 126 yards.

But it goes even farther than that. Last season, Brown:

- by his own admission, was playing without any “explosion” or “ignition” caused by an inability to push off of his big toe

- was in constant “demoralizing” pain

- lost over 3mph off his typical playing speed (23mph vs. <20mph), according to GPS tracking

According to one teammate, he was playing at 50% of his typical ability. To another, 60%. Though less extreme, the medical research backs this up – “Lisranc injuries reduce an NFL offensive players’ on-field production by an average of 21% in the first season following surgery.” Now, with two screws removed from his foot, he’s much closer to 100%.

And remember, despite the massive handicap, it’s not like he was bad. In fact, for a rookie, he was phenomenal, leading all 75 wide receivers in passer rating when targeted (134.4) and ranking 11th in fantasy points per route run. So, imagine if he received a full complement of the team’s snaps, rather than just 58% of the time. Now, imagine if he was operating at full health… rather than just 50-80%.

Too long; didn’t read? Brown is a freakish talent with 4.27 speed, catching passes from the reigning MVP (who he has spent all offseason working with, unlike most wide receivers amidst quarantine). He is a massive injury discount. He is a breakout waiting to happen. He is a future superstar. Draft Marquise Brown in every draft. Every. Single. One.