While Odell Beckham Jr. and his sports hernia surgery is garnering headlines, he’s had a wild ride on the injury report since his days at LSU (ankle fracture/quad bruise/hand injuries). This article will focus on his lower-body injuries, what dynasty and redraft players can expect, and how to manage it all. Below you’ll see a history OBJ’s injuries: 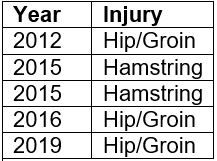 It’s evident that the 2019 groin injury he battled is no joke. Obviously opposing defenses, a new offense, and a coach making questionable play-calling decisions also impacted his performance, but his production slid in the latter part of the year. For example, he averaged just 16.5 yards-after-the-catch following Cleveland’s bye week, compared to 25 YAC prior to the bye week. For comparison, last time he played a full 16-game season, he averaged 30 YAC per game before the bye and 36 after the bye. In fact, he had only four double-digit fantasy games (standard scoring) all year and surpassed 10 fantasy points just three times from Weeks 8-17. Still not convinced? Beckham finished 2019 with career worsts in drops (11), catch rate (55%), and targets per game (8) in seasons in which he played at least 12 games.

I get it. Those numbers aren’t sticky in terms of being predictive- but they paint a larger picture showing that something aside from coaching and team morale just wasn’t right with him. He gives an explanation himself in this video. 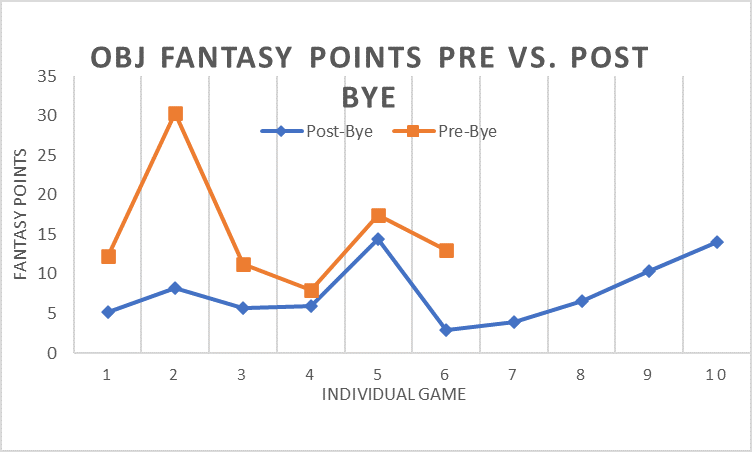 So, the good news is that we’ve likely seen the worst year of OBJ’s prime in terms of fantasy production. An athlete as talented as him just doesn’t underperform like that in average circumstances. This 2017 study bolsters his case by showing that the groin surgery he had does not impact players’ production on the field in the seasons after the procedure. That means that if the injury truly held him back in 2019, it’ll show on the field in 2020. Re-draft players can smash the draft button with confidence that when he does play, he’ll look like the star he is.

Writing this portion of Beckham’s injury profile in 2013 would have looked something like this:

“The biggest predictor of needing sports hernia surgery is having recurrent strains. Some players wait too long to have surgery and try to play through it. The worst-case scenario is that he waits too long to get surgery and his play is hindered for an entire season.”

Well, now that it’s 2020, the “worst-case scenario” is over and dynasty players who weathered the sports hernia-related storm can exhale. However, that surgery shaves a season off of players’ careers on average. One year might not sound like much, but that’s just the average. This leads to age, an important factor in projecting any player’s longevity.

The average age of top-ten fantasy receivers since 2016 is 26-years old. The overall age window is typically between 24 and 28. Beckham turns 28 in November, meaning we’re likely witnessing his peak fantasy capabilities. Unfortunately, hamstring strains could damper his prime. For starters, receivers already have the second-highest incidence of hamstring strains in the NFL at 21%. What’s worse, 34% of NFL players with a previous hamstring strain have a recurrence at some point in their careers. OBJ’s risk is that much more elevated at age 27, which is the average age these strains tend to occur. This isn’t to say that he’s a glaring risk, but it’s irresponsible to ignore those specific set of characteristics he possesses. This is important because wide receivers playing through a Questionable tag with a hamstring strain see a 20% dip in production on average and if they re-injure a hamstring in the same season, they miss an average of 40 days. Lastly, it’s worth noting that a decrease in hip flexibility is not a good thing when it comes to preventing hamstring strains either. A groin injury that affected a thigh muscle very well could reduce that hip range of motion.

When reading this portion, it’s important to understand he’s not toast. In fact, guys like him can hang around at their peak for two or even three years considering their genetic makeup; but make no mistake, he is aging. This is not a prediction of Beckham’s downfall, it’s simply an assessment of his overall physical profile relative to his peers. For dynasty players, if he stays healthy in 2020, it might be time to consider selling. For now, enjoy the next couple of peak-Odell years.

Odell Beckham Jr. is a legitimately generational talent unlike many we’ve seen, but unfortunately, he’s not aging gracefully. He probably has at least two or three truly great years left in the tank, but he is not the perfect picture of health. The goal of laying out his risk factors is to provide as much context as possible to help players make decisions. Although it seems like he has many factors against him, it’s important to realize an athlete of his caliber has the potential to overcome any and all odds.