Deebo Samuel picked up a foot fracture this week and it’s reportedly a Jones fracture. A Jones fracture, like many orthopedic conditions, has several different names due to small variations. For our purposes, it’s a fracture of the long bone between the ankle and toe on the outside of the bone. These injuries happen when a player lands with the foot in a plantarflexed position. Don’t panic. His history of hamstring injuries and a fibular fracture are independent of this common injury among receivers in their first three years as a pro. 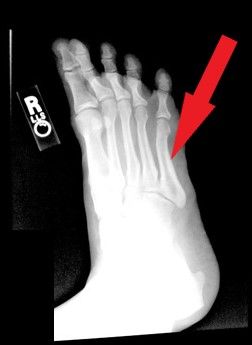 The reports say Samuel will have surgery today, which can take anywhere from six to 12 weeks to recover from. There’s no telling how San Francisco will manage this, but the research shows he should wait at least ten weeks to return to play. Fantasy players should plan accordingly. There’s a small chance he returns at the six to eight-week mark, but that’s an extremely optimistic view. The rehab for this injury is primarily based on bone healing and secondly on a patient’s symptoms. If he can’t walk without pain by Week Seven, his outlook to be back by Week Ten is bleak.

These fractures and recovery are tricky, as it’s not uncommon for the bone to simply not fuse back together. The biggest risk factor for this is if he comes back too early. This study shows that in a sample of 42 players who had Jones fracture surgery, 15 (36%) of those players returned to play before ten weeks. Of those 15 who came back before ten weeks, nine of them (60%) required a second surgery to fix the non-union. This is compared to just four players who needed a second surgery if they waited to return after the ten-week mark. Overall, about 30% of these players required a second surgery fracture. For those reasons, Samuel falls from the bottom of the Green Light Volatility tier to the bottom of the Yellow Light Tier.

In the short term, this is a very fluid and fragile situation. The rehab team will closely monitor his progress and he’ll progress gradually through the protocol. If he returns prior to the ten-week mark after surgery, there’s an average production dip of 53%. Players who waited until after the ten-week mark saw no decrease in production. In the long term, this study shows that Jones fractures cause a reduction in performance. However, it’s important to remember that the average draft pick of that study was 111 overall, and Samuel was the 36th overall pick. That means historically, Samuel will be given the benefit of the doubt and has a greater athletic reserve to overcome the obstacle.

Overall, redraft players who are cautious of Samuel this year and monitor his situation closely. The magic date is August 27th, 2020. If Samuel returns to full activity before that date, definitely monitor his health. This obviously means he’ll miss reps in camp, which could lead to a slow start. If you’re a dynasty player, use this window to acquire Samuel at a lower price.