The scoring from Week 14 stands as the highest average of the season (25.4). While the deep (20-or-more yards) passing rate (11.4%) remained consistent with the previous seven weeks, the quality of the attempts were, arguably, the best we’ve seen this season. QBs combined to throw for 12 TDs vs. only two INTs — a season-best 6-to-1 TD-to-INT ratio, and the 13.0 YPA from last week is the second-highest over the last seven weeks. You can check the data out for yourself below: 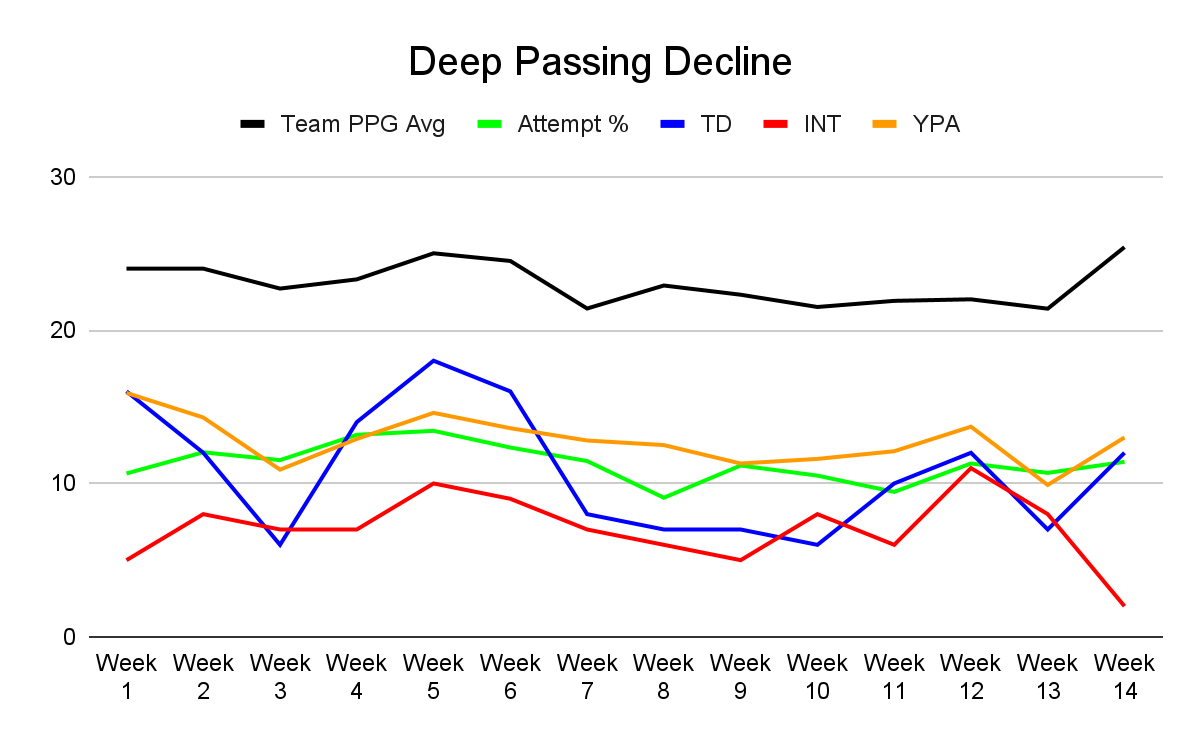 Do these numbers indicate deep passing is back to its early-season form? Unfortunately, no. We have substantial historical evidence indicating that, as we go deeper into a season – sans injury-crippled units, defenses exponentially improve toward sending the production curve toward a downward slope. Proof of that statement can be found in the chart below, showing that, in spite of the big week of the long ball, the metrics for each of the qualified position groups actually improved (nearly) across the board. And air yardage/coverage snap (AY/CS) continued to decline for every qualified position group in Week 14.

How can this information be applied toward actionable lineup construction? Targeting the struggling qualified defenders will always be at the forefront of the process. However, targeting late-week replacements in the secondary that have yet to play a significant role this season (the unqualified) has been a profitable approach, in the right situations, of course. We should never eliminate a QB from orchestrating deep-passing success in a single week. But receiver target share reliability should continue to be held in very high regard – particularly in Cash/Single-Entry (SE) games. DFS success has always been dictated by the players receiving the opportunities. And those opportunity shares are even more important without the deep passing reliability to bust a particular slate.

As always, the following chart provides the full names for the acronyms and the defensive coverage performance numbers for each position group through Week 14:

Offensive abbreviations used when referring to the performance of QBs/RBs/WRs/TEs:

Houston Texans at Jacksonville Jaguars (Over 39.5)

Tennessee Titans at Pittsburgh Steelers (Over 41.5)

Arizona Cardinals at Detroit Lions (Under 47.5)

Carolina Panthers at Buffalo Bills (Over 43.5)

Cincinnati Bengals at Denver Broncos (Under 44.5)

Minnesota Vikings at Chicago Bears (Over 44.0)

We need to be extremely careful when interpreting the results of last week’s 48-9 destruction of the Raiders by the Chiefs. On the very first play from scrimmage, Josh Jacobs fumbled, and Mike Hughes returned it for a touchdown. In addition to Las Vegas losing four fumbles in Week 14, they turned the ball over on their first drive in three-of-four quarters. It’s the type of craziness that can befall any NFL franchise on any given Sunday. And, due to those mistakes, we saw several individuals take the field and succeed who would normally play a minimal role. One of those was Derrick Gore. Clyde Edwards-Helaire and Darrel Williams combined for 18 touches, 110 total yards, and three TDs by the end of the third quarter. With the score 38-9 to start the final frame, Gore closed out the game by touching the ball on 82% of the offense’s plays, and culminating in a 51-yard TD on KCs final play.

Let’s begin by infusing those 11 touches from Gore back into the CEH-Williams rotation. That leaves CEH with a 72% share of the backfield touches in his third game removed from his IR stay. It continues an upward-facing trend of involvement since being activated. While the Chargers’ scheme rotation adjustments since these teams last met in Week 3 will put a defense far different from the one that beat Kansas City 30-24, it still represents one of the four examples where CEH covered his floor (20.9/15.9 FPs). Los Angeles is surrendering the following to opposing RBs:

Did you catch that last data point? The Chargers have been stingy to receiving production from backs, pushing the matchup balance further in favor of Edwards-Helaire. As I’ll cover next, I am expecting LACs offense to move the ball against the Chiefs. Do not expect to see Gore stealing away carries from CEH this week. Outside of the Jets and Texans, the matchup simply could not get any better for CEH, and he’ll enter it with RB20/RB19 pricing, to boot.

Following a 27-3 loss at Tennessee in Week 7, DC Steve Spagnuolo shifted his defense to heavily featuring Cover 2 – currently using it at the second-highest rate. They are also fielding the 13th-highest rate of Cover 6. So, should we expect a different result from Week 3 when Herbert tossed for 281 passing yards, four TDs, and 30.8 FPs? No. They actually put a nearly identical rate of Cover 2 and 6 on the field that week.

Why should we expect Justin Herbert to succeed against a KC defense that has limited opposing QBs to 12.2 FPG since Week 8? Since joining the league, Herb’s generated 0.40 FP/Db (third-most), 107.9 passer rating (the highest), and a 24% increase to his YPA average (fourth-highest) when working against Cover 2. Against Cover 6, he’s posted 0.35 FP/Db (ninth-most), 94.3 passer rating (11th-highest), and a 21% spike in YPA (sixth-highest). If Herbert keeps the offense moving, there is even a high probability that the Chiefs will use Cover 2 at around a 30% higher rate like they did in each of the games where their opponent kept pace.

Let’s face the facts. Patrick Mahomes II ($7.8K/$8.3K) has only covered his floor twice over the last nine games. Nobody in Kansas City will mind since the Chiefs are currently 9-4, have won their last six games, and currently have the seventh-best odds to make the playoffs. But we certainly care. KC is playing at the fifth-highest pace (66.7 plays/game), passing at the third-highest rate (67.2%), but are “only” scoring the eighth-most PPG (27.0). Pass protection is likely causing the cap on his numbers. Over those nine games, the Chiefs’ O-line has permitted double-digit plays with pressure in seven (78%). And LAC features a top-10 pass rush led by Joey Bosa. I’ll have some GPP exposure to Mahomes on FD with an expected floor of 20.8 FPs, but I’ll be fading on DK where he’s being asked for 23.4.

As explained, this could be a down week for Darrel Williams ($4.9K/$6.1K). And Derrick Gore ($4.0K/$5.3K) is not on my radar. The only way I’ll have more than a share or two of Tyreek Hill ($8.3K/$8.3K) is if the hamstring injury that kept Derwin James out last week prevents him from playing. Normally a pass rushing threat, James is asked to help in coverage more to contain Hill when Kansas City is on the schedule. Not only that, but the top-three rate of Cover 6 that the Chargers employ – a weekly threat to play a leading rate each week – has been a thorn in Tyreek’s side the last three seasons. His FP/Rt declines by 21% and he’s yet to score a TD against Cover 6 over that time.

Byron Pringle ($3.2K/$5.2K) only collected one ball, but he ran the second-most routes last week. Demarcus Robinson ($3.0K/$4.9K) was third, followed by Josh Gordon ($3.1K/$5.0K). Best not to get too excited about the short TD catch from Gordon. In addition to landing on the COVID list Monday, his three targets (14% target share) stands as a season high. Mecole Hardman ($3.5K/$5.3K) has three targets or fewer and has run no more than 33% of team routes in four straight. If you can squeeze him in under the cap, this is a spot where Travis Kelce ($7.2K/$7.5K) should post a big game. LAC is delivering the second-most TDs/game (0.69) and sixth-most FPG to TEs (15.4). Rumors of his demise are vastly overstated. Kansas City has simply been winning games by considerable margins.

Mike Williams ($6.2K/$7.0K) shredded the Chiefs with 7/122/2 the last time these teams played. And Williams put 3/40/2 of that receiving line Mike Hughes. It just so happens that, with Sneed out and Rashad Fenton kicking into the slot, Hughes played every snap on the right perimeter last week, the same side of the field where Williams runs nearly two-thirds of his routes. Just as passed along last week with the possibility of Allen missing Week 14, it wasn’t Jalen Guyton ($3.7K/$5.5K) that saw the bump in opportunity, but Josh Palmer ($3.2K/$5.2K).

While Palmer will revert back to being the fourth option on the depth chart, we now have concrete proof that Palmer is the direct replacement for Allen when he is forced to miss time in the future. But the emergence of Guyton as a threat only fuels this LAC attack to near-juggernaut status. It appears that the Chargers will have both Jared Cook ($3.5K/$5.2K) (quadriceps) and Donald Parham ($2.8K/$4.5K) (knee) available, capping the upside of both.