Hello and welcome to the Week 13 Sunday Morning Update. What is this article? Mostly it’s a follow-up to yesterday’s big DFS piece – Scott Barrett’s Week 13 DFS Breakdown. But this article should also offer some utility of its own for redraft and dynasty players.

Each week Graham Barfield and I will be breaking down the key injuries, news, and notes from Saturday / Sunday and will be updating this article up until kickoff (1PM EST). And we’ll also be providing a sort of TL;DR to yesterday’s big DFS article. Who are my core cash game plays? Who are Graham’s preferred low-owned plays for tournaments? You can find that at the end of this article.

– Jalen Hurts is OUT. No surprise. Boston Scott is ACTIVE.

– David Johnson is OUT.

– Confirmation that Kyler Murray and DeAndre Hopkins are both in from NFL Network’s Stacey Dales. I wouldn’t get cute and play these guys in rainy / windy conditions in Chicago.

#AZCardinals Head Coach Kliff Kingsbury just officially told me that Kyler Murray and DeAndre Hopkins are both playing today versus the #Bears. @nflnetwork

– Barring any late news, we know who is in and who is out already this week. The last two we’re waiting official word on is Jalen Hurts (ankle) and Darrell Henderson – and both sound extremely doubtful…

– The Rams have a huge game against the Cardinals on tap in Week 14 and can dust the Jags without Henderson, so common sense dictates that Sony Michel should start. He has far less wear and tear at this point than D-Hendo. Schefty is batting damn close to 1.000 when he says a team “isn’t optimistic” on a guy, so I’m building lineups this morning with the expectation that Henderson sits:

Rams will test running back Darrell Henderson and his thigh before Sunday’s game to see if he can play vs. the Jaguars, but the team is not optimistic about him being able to play, per sources.

– If Jalen Hurts is out as expected, Gardner Minshew becomes your punt cash game QB for the week. He doesn’t have a huge ceiling, but this matchup can’t possibly get any easier obviously. I think Philly just runs the ball down the Jets’ throat.

– James Robinson is a game-time decision with knee / heel injuries. He’s been playing hurt for weeks now. Robinson isn’t in play on a loaded RB slate if he goes and Carlos Hyde wouldn’t be in play if Robinson does sit.

– Josh Jacobs is expected to play. He’s been battling injuries all year again. DeSean Jackson is good to go, too, after a mid-week scare with his calf. D-Jax playing and taking the top off the defense is huge for opening up the underneath stuff for Hunter Renfrow and Foster Moreau.

– TJ Watt was activated off of the COVID list and will play today for the Steelers. Watt has been the lynchpin for Pittsburgh defensively this year, so it’s at least a slight ding to Lamar Jackson and the Ravens. Check out the Steelers passing stats allowed with Watt on / off the field per SIS: 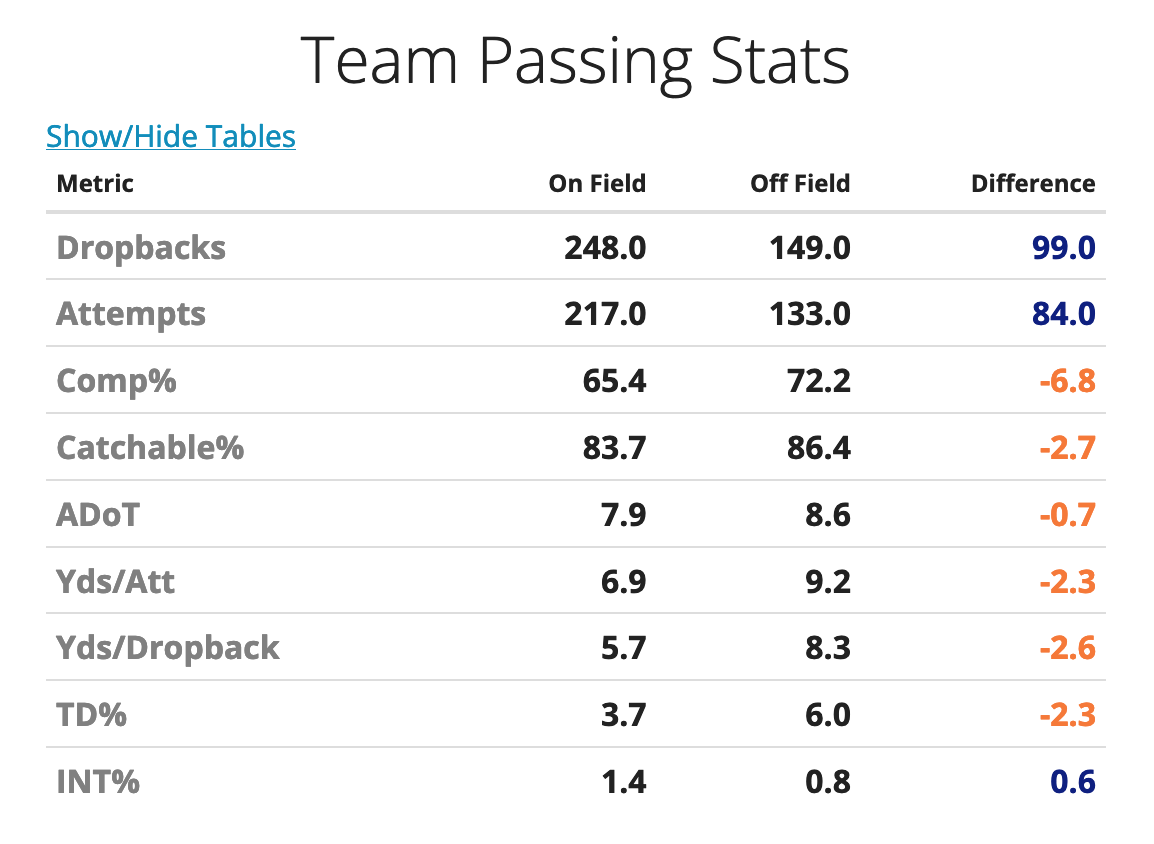 - Per Adam Schefter, it seems Eagles QB Jalen Hurts is technically a gametime decision, but it’s looking doubtful he plays.

- Per Adam Schefter, Eagles RB Boston Scott is EXPECTED TO PLAY. This nukes Miles Sanders as a DFS value. He’s still in play, but he’s no longer in the top-10.

- Per Adam Schefter, Texans RB David Johnson (illness, thigh) is NOT EXPECTED TO PLAY. I’d expect Rex Burkhead to get the bulk of the work, with Royce Freeman and/or Jaylen Samuels (0 combined snaps with the Texans) mixing in to a slight degree. Burkhead has 30 carries and 3 targets over the last 2 weeks, but just 12.4 total fantasy points. On a typical slate he might be in play, but probably not this week with so many attractive RBs in play.

- Per Adam Schefter, DeAndre Hopkins is “likely to play vs. the Bears but could be used more sparingly than usual due to his injury and the weather conditions, per source.”

- Giants QB Daniel Jones is OUT.

- Vikings RB Dalvin Cook is OUT.

- Lions RB D’Andre Swift is OUT.

- Eagles RB Jordan Howard is OUT.

- Washington RB J.D. McKissic is OUT.

- Bears WR Marquise Goodwin is OUT.

- Raiders TE Darren Waller is OUT.

- Jaguars TE Dan Arnold is OUT.

- Steelers CB Joe Haden is OUT.

- Jaguars CB Shaquill Griffin is OUT.

- Chargers CB Asante Samuel is OUT.

- Vikings LT Christian Darrisaw is OUT.

- The Ravens have 5 CBs (all 3 starters, 2 backups) listed as QUESTIONABLE.

I think this is a weird slate.

I think, for GPPs, everything comes down to getting the RBs right. And that makes things tricky, because I legitimately love like 10 RBs this week. However, I do think this is a perfect slate for MME players.

I think this is a good week to go contrarian. I won’t have any exposure to Foster Moreau (there are a lot of TEs to like this week) or MIA DST, but will be playing both on my cash lineups. If you're entering large-field tournaments like the Milly Maker, try to be smart. Leonard Fournette (at just 3% ownership) was the perfect contrarian play last week, off of Tom Brady and Chris Godwin chalk. Who might that play be this week? Josh Jacobs isn't a good play in a vacuum. Not at all. But maybe he is if Antonio Gibson is likely to be 25% owned… Michael Pittman is a good play on paper, and he's an even better one when we factor in Jonathan Taylor's 23.8% ownership projection… Similarly, what about Rob Gronkowski (DK) as leverage off of Chris Godwin and Foster Moreau chalk? Etc.

Cash feels easy, and especially now with the news that (it at least seems likely) Jalen Hurts will sit. In the TLDR I had Lamar Jackson above Gardner Minshew on DraftKings, but that was a mistake. I’ll be playing Minshew in my own cash lineups if Hurts is out. And I actually like him a lot for GPPs, and don’t expect him to be too highly owned either.

DeVante Parker will play this week, and, so long as he won’t be limited in any capacity, is now a top value on both sites.

Keep an eye on Baltimore’s cornerbacks. They have 5 CBs (all 3 starters, 2 backups) on the injury report listed as questionable. It’s already a top-3 matchup for Diontae Johnson and Chase Claypool, but could be the best matchup any team has had all year depending on who is out. As gross as it feels, QB Ben Roethlisberger would warrant consideration for large-field tournaments as well.

Boston Scott will play this week. So Miles Sanders is no longer the top-5 play I said he was in the TLDR. In fact, he’s no longer in the top-10.

Hopefully we’ll get official word that Darrell Henderson is out. But, if it’s trending towards a true game-time decision that won’t be announced until after the 1PM games lock, then it’s worth pivoting.

It’s hard not to love Antonio Gibson this week, but the way to get weird is to fade Gibson and play Heinicke + his pass catchers. We’ve seen Heinicke hit ceilings of 20+ FP in 5-of-10 starts this year and this is certainly a spot for him to hit another. Over the last eight weeks, the Raiders have given up the second-most passing fantasy points per game (17.7) and the third-highest passer rating (102.3). If Heinicke is going to hit a ceiling, he’ll need McLaurin to have a great game, too. McLaurin has gone for 100+ yards four times in the 5 games that Heinicke has scored over 20 FP. Logan Thomas is a strong play, too, at 4% expected ownership (more below).

QB ownership is going to be fairly flat this week – Lamar, Herbert, Carr, and Brady will all be fairly equally popular – but that’s going to leave a few nice stacks at 3-5% and Burrow is one of them. Yes, Joe Mixon is in an excellent spot, but so is Burrow. The Chargers gave up 294 yards / 2 TDs to Kirk Cousins and allowed a season-high 22.9 FP to Roethlisberger before facing an injured Teddy Bridgewater last week. Ja’Marr Chase and Burrow need to get back on track with the deep ball for Burrow to smash, so Chase is the stack – not Tee Higgins.

– There are so many great RB plays this week, I see no reason to go super off the board here. The way I’d get contrarian this week is to just fade some of the high-owned RBs outright like we discussed with Taylor Heinicke and Matthew Stafford above.

– That said, Cordarrelle Patterson (5% DK | 8% FD) is absolutely my favorite one-off, low-owned RB of the week. He’s had one of the safest floors / best ceilings in fantasy with RB20 or better finishes in eight straight healthy games and five finishes of RB12 or better. If you’re playing Tom Brady stacks, you need the Falcons to somewhat show up and Patterson is the best (and only) avenue there. Yeah, the Falcons will be trailing and the Bucs’ run defense is amazing, but C-Patt has so many avenues to get there. Tampa is allowing the third-most receptions per game (7.1) to RBs.

– WR is pretty thin this week, so I’d put an even greater emphasis on pairing up our QBs with the right WRs…

That said Marquise Brown should not be projecting for sub-10% ownership. After dealing with a thigh injury, Hollywood is off the injury report and the Steelers have given up 20+ FP to four different WRs over the last four weeks. Now Joe Haden is out.

– Logan Thomas (4% both DK and FD) assumed a near full-time role in his return off of IR as he ran a route on 68% of the passing plays. Now he faced a Raiders secondary allowing the fourth-most yards and third-most fantasy points per game to TEs.