Before we dive into the plays, I need to clarify the approach to Saturday’s preseason games. Not only are “some” starters expected to play, the majority of head coaches are being cryptic about the exact individuals expected to play. In all likelihood, no definitive word will even be passed along outside of some of the inactives.

Just as I’ve done with every preseason slate to date, I am approaching tomorrow’s games with the most current information available. I am also assuming most starters will play a minimal role. If you happen across some useful information providing you with confidence toward a starter playing additional snaps, outstanding. But I will be avoiding those suggestions — sans one particular “starter” with a perfect schematic match — without anything pointing to definitive playing time.

If HC Vic Fangio is stating he is close to naming his starter after one preseason game, then all arrows appear to be pointing to Drew Lock. He finished the first preseason game with a perfect 158.3 passer rating. But Fangio also referenced the Seattle game’s importance in the decision. Lock will need to be on his game to come away with the job. Well, history suggests that Teddy Bridgewater’s chances of overtaking him are minute. Why? The Seahawks’ usage of Cover 3. Last season, Seattle used Cover 3 at the third-highest rate. In Week 1 of the preseason, DC Dennis Allen used it for nearly two full quarters of the game. Nothing has changed.

As for the Broncos’ QBs themselves, over the last three seasons, Bridgewater ranks 47th out of 52 qualified QBs with 0.25 FPs/dropback when facing Cover 3. On 25% of all dropbacks against the coverage, he’s thrown one TD and four INTs. Lock, on the other hand, ranks ninth-best with 0.47 FPs/dropback. On 20% of his dropbacks, he’s thrown seven TDs (31% of his total) to three INTs. In four games last season against a defense featuring a top-10 rate of Cover 3, Lock scored his top-four outputs, averaging 23.4 FPG. In all honesty, this is not the matchup that should be used to fairly decide Denver’s starting QB.

Vikings HC Mike Zimmer was not pleased with the way his team played against Denver last week. Facing off with what has appeared to me to be the most vicious preseason defense after one week, perhaps he should cut his team a slight break. Either way, we can expect to see most of Minnesota’s starting defense on the field for at least the first quarter. Using the opportunity to roster Sam Ehlinger may not fill you with confidence, but Ehlinger has a trick up his sleeve that demands our attention: his legs. In addition to averaging 10.3 YPA through the air, he collected 30 yards on the ground. While I have more confidence in Lock facing a ton of Cover 3, Ehlinger should be an excellent pivot with the promise of a full half of football.

The Bottom Line: We will never be blown away by Ehlinger’s arm. In that particular department, Jacob Eason has him beat. But confidence was a key component to Ehlinger’s collegiate success. The NFL stage is not too big for him. Saturday’s test will go a long way toward determining what type of future is in store for Sam. That confidence and slick maneuverability might just be enough to allow Ehlinger to play up to his competition for a solid DFS output.

As the above screenshot suggests, Sam Darnold is not expected to play more than a handful of snaps. And HC Matt Rhule’s comment on Walker’s play against Indianapolis seems a bit harsh. Walker pushed the ball aggressively and still averaged 7.7 YPA. As for Will Grier, his future is the practice squad. However, I actually prefer Rhule wanting to see more from Walker. As do I. He’ll face a Ravens’ squad that intends to rest every key asset, including their murderer’s row of defensive backs. Without their starters, Baltimore’s pass rush has not impressed.

The Bottom Line: The best part of exposure to Walker is that he is currently running with an uber-talented rookie trio of Terrace Marshall Jr., Shi Smith, and Tommy Tremble. There’s more than enough firepower for Walker to leave his mark.

One of the most impressive Week 1 preseason performances at RB was from Trey Ragas. The UDFA out of Louisiana is a hulk of a back at 5’10”, 230 pounds. During the Raiders’ trouncing of the Seahawks last week, Ragas was on the field for a total of 39 snaps, was provided a 46% touch percentage (18 touches), and produced 82 total yards.

The Bottom Line: The Raiders are heavy favorites to decimate the Rams, entirely due to LAR HC Sean McVay’s refusal to play his starters in the preseason. Don’t expect much, if any, involvement for Josh Jacobs or Kenyan Drake. Just as last week, Ragas is likely to split the majority of backfield reps with fellow UDFA BJ Emmons. During joint practices this week, fights broke out at such regularity that both teams were removed from the field. In a game with a touch of bad blood, Ragas is precisely the type of back who will enjoy bruising his way through the LA defense after averaging 3.4 after-contact yards last week. 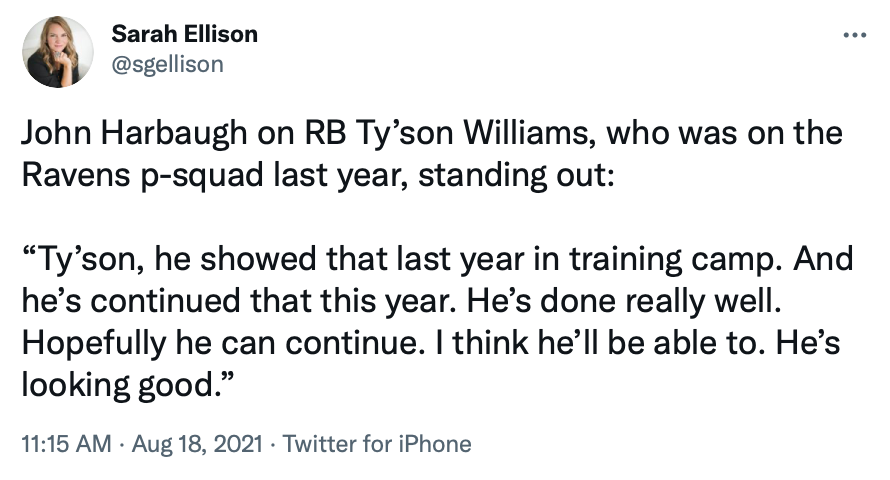 Another RB with a bruising mentality is Ty’Son Williams. He’s made such an impression in camp that Justice Hill’s spot on the roster is in serious jeopardy. Provided with a 47% touch rate on 34 total snaps last week, Williams compiled 65 total yards, caught five passes, and broke three tackles.

The Bottom Line: In addition to the extended run he’s expected to see, Williams will go up against a Panthers run defense that gave up 117 rushing TDs, a pair of TDs, and missed five tackles against the Colts last week. Expect to see Williams toward the top of the preseason Week 2 RB scoring leaders.

After only playing three snaps in the Hall of Fame game, TaQuan Hardy tripled that number, and also tripled his rushing yardage total last week. The UDFA out of Tiffin has concentrated a good amount of momentum that could make things interesting if it continues.

The Bottom Line: Hardy ran through 7 tackle attempts on 8 carries against Arizona last week! Hardy’s frame of 5’10”, 225 pounds, showed HC Mike McCarthy how productive Hardy can be while grinding down a defense. Rico Dowdle will still see his share of touches, but Hardy’s role could continue to grow in a matchup against a poor Texans’ run defense. 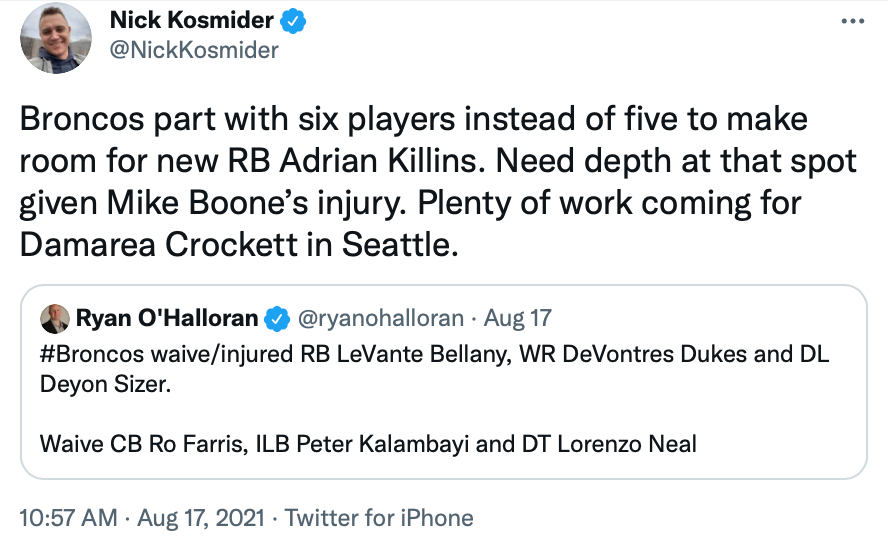 We will likely see either Lock or Bridgewater on the field for much of the game. Of course, Javonte Williams and Melvin Gordon III will see a few series to open up the contest. And Royce Freeman will also play. But Mike Boone is out, LeVante Bellamy was waived/injured. Whatever is remaining will belong to Damarea Crockett.

The Bottom Line: On 27 snaps last week, Crockett saw a ridiculous 63% touch rate. And he used every bit of his 5’11”, 225-pound frame to generate 3.8 YAC/attempt. If he was set to face the starting Seattle defense that proved to be one of the nastiest against the run last season, exposure to Crockett would not be advisable. He will not be, we should be considering the former Missouri Tiger on Saturday night.

At this point, how can we even consider fading Trinity Benson? Yes, he’ll be highly rostered… for a damn reason. He’s been a human highlight reel throughout training camp and last week when he found the end zone twice.

The Bottom Line: The question we really need to begin asking ourselves is how much longer are we going to wait before giving Benson dynasty love? It doesn’t matter when he is inserted into the lineup, he’ll have the benefit of being delivered the ball from an NFL-caliber QB. Fingers crossed he’s on the field more with Lock and his Cover 3 mastery.

DJ who? It’s time everyone gets used to the name DJ Turner. The UDFA out of Pittsburgh is a lock to make the Raiders’ 53-man due to his punt returning prowess alone. Last week, Turner saw a target on nearly one-third of his 27 routes run. He responded with seven receptions for 43 yards. And he even carried the ball twice for good measure.

The Bottom Line: Again, if this were the Rams’ starting secondary, everyone involved in Las Vegas’ passing offense — perhaps even Darren Waller — would need to be faded. As we already know, McVay will not risk his starters. Fire up Turner’s impressive athleticism in what’s expected to be a physical game.

2021 second-rounder Terrace Marshall Jr. made quite an impression last week. He collected three-of-five targets for 88 yards, his longest going for a cool 60. He’s not going to see anything close to the 50-plus snaps that other rookies and those fighting to secure a roster spot will see. But he’ll see all of his snaps with either Sam Darnold or PJ Walker at QB.

The Bottom Line: Baltimore HC John Harbaugh already expressed his thanks for making it through the week without any new injuries to his key players. So we will not see him risk one occurring this week at Carolina. Marshall — who has nearly secured the WR3 role — will be defended by second- and third-string corners. Love it.

You gotta love the cryptic nature of preseason coach speak. Who is included in the “but not all” assertion? One individual we know will be in the mix is Dezmon Patmon. Last week, Patmon played 52 snaps! He turned a 21% target rate into five receptions and 49 yards.

The Bottom Line: For the first Colts’ WRs on the field, they’ll face a much different Minnesota secondary than the one that opposed the Broncos last week. But Patmon will see those reserve corners during his second half reps. And that is great news for his prospects, since those Vikings’ corners played some of the worst football of the preseason’s opening week.

Jacob Harris wasn’t the TE I originally intended to feature. That distinction was held by Tampa Bay’s Tanner Hudson, who will miss Saturday’s game. That’s not to say that Harris is a slouch pivot. He was only on the field last week on 23 snaps, but he ran a route on 22 of those plays. That’s not a surprise whatsoever, give he played fewer than 10 inline blocking snaps during his entire college career.

The Bottom Line: The component of Harris’ game that came gift-wrapped for the Rams was his receiving skill. He put that on full display last week against the Chargers. And McVay will want to get Harris as many snaps in the preseason as possible to get him ready to contribute this season. There is even an outside shot that he could be out in front of Brycen Hopkins for the receiving portion of the TE2 role.

The Ravens endured a scary situation when Mark Andrews collapsed on the sidelines in practice last week. What was originally feared to be a more serious situation turned out to be severe cramping. Regardless, you will not see Andrews on the field this weekend after being transported to the hospital in an ambulance. Already playing 48 snaps last week, Josh Oliver will play as many snaps as he can handle on Saturday.

The Bottom Line: While Oliver used his four receptions to post only 22 receiving yards against the Saints, he’ll face a far more generous Panthers’ defense this week. As long as he sees similar volume, Oliver will have every opportunity to contend for the honor as the top scoring DFS TE.