NOTE: THE WEEK 0 VERSION OF THIS ARTICLE IS A FREE PREVIEW OF WHAT JOSH CHEVALIER (@CFFGuys) HAS TO OFFER AT FANTASY POINTS! ALL FURTHER DFS SLATE PREVIEWS WILL BE PART OF THE DFS AND BETTING PREMIUM PACKAGE.

College football is back! The Week 0 slate feels like Christmas day every year!

The football gods gifted us with two games on the first DFS slate with implied totals over 62 including a potential shootout between UCLA and Hawaii. This slate features gunslinger Jake Haener and two of the top Konami Code QBs in college football, Dorian Thompson-Robinson and Chevan Cordeiro. We have questions to answer like “Who leads the UCLA and Nebraska backfields?” and “Which Adrian Martinez shows up?”

This slate is filled with teams who put up points and are fun to watch. Let’s dig in.

Against the Spread Picks

Illinois vs. Nebraska (Under 55)

Fresno State vs. Connecticut (Under 62.5)

Averaging 27.4 FPG, Jake Haener was a revelation last year for Fresno State after transferring in from Washington. Connecticut did not play last year, but in 2019, they were the 93rd-ranked pass DEF. Combined with an implied team total of 44.5, Haener will have no problem hitting 27 FPG in this game. In fact, he scored 30-plus FPs in five of the six games played last season. In CASH/SE (single-entry) lineups, it’s hard to find reasons not to put Haener in our lineup unless you prefer to spend the salary elsewhere.

After coming to UCLA in 2018 as a top dual-threat QB, Dorian Thompson-Robinson finally broke out in a big way in 2020 scoring 24+ FPs in every game he was healthy. A true Konami Code QB, Thompson-Robinson averaged 11.5 rushing attempts and 65 YPG. Thompson-Robinson provides a high ceiling after scoring 30-plus FPs in three of the four games played last season, including 49 FPG versus Colorado. With an implied team total of 43.5, Thompson-Robinson will have a big game versus Hawaii. 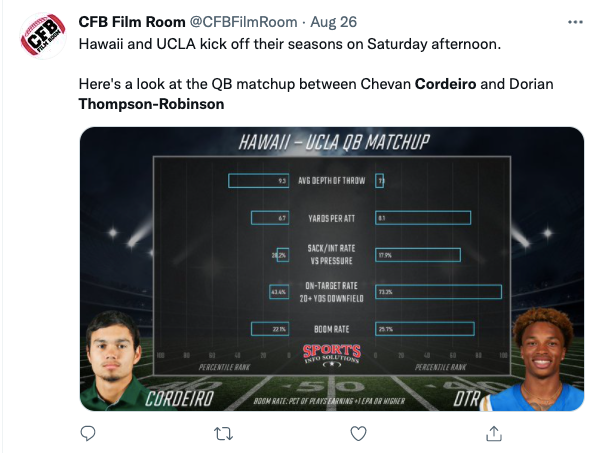 Chevan Cordeiro averaged 25.5 FPG last year while scoring 25-plus FPs in six of his nine games played last season. Another Konami Code QB, Cordeiro averaged 13 rushing attempts and 53.9 YPG along with 7 TDs. In 2020, UCLA’s DEF ranked 108th versus opposing QBs allowing 27.4 FPG. Cordeiro has a phenomenal value on DK at $7.5K. Slotting Cordeiro in our lineup versus Haener allows us to spend up at the skill positions.

Putting Adrian Martinez in your lineup is certainly an experience as you never quite know what you are getting that week. We rolled the dice versus Rutgers last year with Martinez and it paid off to the tune of 40.9 FPs despite four turnovers.

Dare we tempt fate twice since he is only $6.8K on DK? He is certainly appealing with a matchup versus an Illinois team ranked 88th versus opposing QBs. However, the top three options on this slate have higher floors with similar ceilings as Martinez. He is simply not worth the risk in CASH/SE contests.

Depending on your level of engagement in 2020 with college football, Ronnie Rivers is possibly the best RB you have never heard of. In five healthy games, Rivers scored 33-plus FPs in three of them last year including 56.2 versus UNLV. He averaged 20 rushing attempts and 5.2 receptions per game as the focal point of the Fresno State offense. Connecticut’s rush DEF was ranked 123rd versus opposing RBs in 2019. Even at $7.9K, Rivers is a MUST in our lineups in CASH/SE contests.

Calvin Turner is another RB who exploded onto the scene during a tumultuous 2020 season averaging 21.5 FPG. Turner is the ultimate swiss army knife and the top playmaker in the Hawaii offense. Despite being listed as a RB, Turner lines up in the slot on over half his snaps on the field. In fact, he was by far the team leader in receiving yards and TDs. UCLA is ranked 112 versus opposing WRs. As an 18-point underdog, Hawaii will be throwing the ball a ton in this game as they attempt to keep up with UCLA. At only $6.4K, Turner is a MUST in our lineups with a game script that plays in his favor. 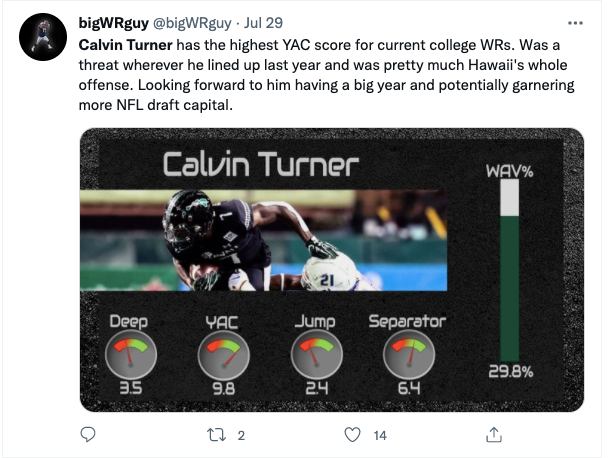 Brittain Brown is the RB1 in a Chip Kelly offense that loves to feature its top RB. In his three years at UCLA, Kelly’s RB1 has averaged 23 touches per game. Brown started one game in 2020. In that game, he had 31 touches for 241 total yards. UCLA is an 18-point favorite against an Hawaii DEF that is ranked 121st versus opposing RBs. This is a dream matchup.

What’s the catch? Throughout fall camp, Brown has been splitting reps with former Top247 recruit and Michigan transfer, Zach Charbonnet, in what UCLA beat reporters are describing as an 1A/1B situation, making it difficult to project what to expect in this matchup. History says Kelly is going to feed Brown, but there is uncertainty here that makes me hesitate in fully endorsing him in CASH/SE contests.

Kevin Mensah is little-known to many because 1) he plays for Connecticut and 2) Connecticut opted out of the 2020 season. However, Mensah has two 1,000-yard seasons under his belt with over 225 rush attempts in each season. Game script does not matter for Mensah as Connecticut gave him 19-plus touches in six games in 2019 losing five of those games by 25-plus points. Fresno State is ranked 75th versus opposing RBs in FPG He is criminally undervalued on DK at $4.2K.

Jalen Cropper is the best WR on this slate and it’s not even close. He led the Fresno State WRs in every receiving category. Over the last three games of the season, he averaged 14 targets, 10 receptions, and 148 receiving yards along with four TDs. It’s hard to envision Cropper not having a big game versus a Connecticut secondary that is ranked 93rd versus opposing WRs in FPG. He is affordable on DK at $7.3K. 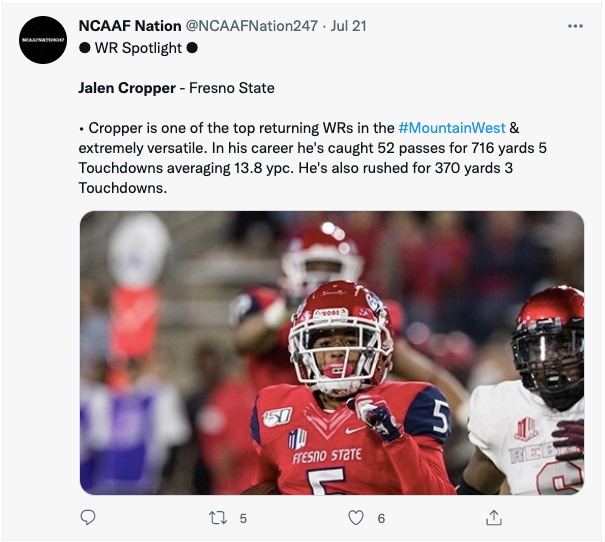 Josh Kelly was the clear WR2 for Fresno State last year yet he is priced as the WR4 for them on DK giving us a great value play at $4.4K. Kelly functions as the deep threat in the Fresno State offense with an ADOT of 14.3. If Haener and Kelly connect on just one explosive play for a TD then he hits value. Kelly is a great upside play that will allow us to spend up on QBs and RBs at an affordable price.

Cameron Ross is the clear WR1 for a Connecticut team that will be throwing the ball a lot as a 27.5-point underdog. In 2019, he doubled the production of every other Connecticut WR on the roster to the tune of 90 targets, 61 receptions, and 722 yards with four TDs in 11 games. He is another cheaper option that should see 8-10 targets who allows us to target quality options at QB and RB.

Kyle Phillips is an attractive PPR option on DK in a UCLA-Hawaii game that has serious shootout potential. Phillips averaged 8 targets and 5 receptions per game, providing a security blanket for Dorian Thompson-Robinson in the passing game. While he provides a high floor in CASH/SE contests, his ceiling is limited with only two receiving TDs LY. He is my least favorite of these four options at his price point of $7.0K.

Josh Chevalier started playing CFB DFS when it was introduced on DK in 2015. Since its return to DK in 2018, he has provided in-depth weekly articles & analyses specializing in Cash/SE contests.