Getting Into Sports Cards

Getting Into Sports Cards

It’s not a topic I usually associated with fantasy sports, but in early September of 2020 I saw a CARDS section pop up on the Fantasy Points site and on FP’s Discord. It’s the first time I have seen a sports card section or even a mention on any fantasy football site. I was curious, as I collected cards as a kid and have carried that collector mentality into my adult life (comic books, toys, Japanese vinyl figures, posters, etc.). It really didn’t take long for me to get hooked on cards again. In fact, I’ve spent more money on cards than I have on fantasy entries…and I play in a ton of leagues!

The world of card collecting has changed since I was younger. There is the hobby aspect which I really enjoy, and there is the business aspect. I treat a decent portion of my collection like I treat my fantasy teams: as an investment. I feel a fantasy players’ knowledge and competitive nature lends itself perfectly to the business side of collecting cards. Fantasy players have a built-in edge over other collectors. Just like in fantasy sports, you are trying to identify sleeper and value players, in the hopes of cashing big…or at least a good ROI (return on investment).

As fantasy players we all call our shots and when we sit down at a draft table we think we are going to beat every other owner in the league via the draft and in-season management. Cards are no different. You target players that are undervalued or believe will take a big step forward, buy their cards at a reasonable price before others have the chance and know when to cut bait (sell).

I’ll give you an example. I like big, fast, physical WRs with a will to win. I picked a few players to follow on StarStock (more on StarStock in another article, but think stock market for cards). I decided to monitor their prices in September to see if they went up or down. One player that intrigued me because his price chart was pretty flat during September and the first week of August was D.K. Metcalf. His price didn’t make sense to me, especially since he started the season with a TD in each week for the first three weeks and had two 90+ yard games and one 100+ yard game. Why are people ignoring him? Personally, I’ve thought he was a beast from the day he was drafted. The only thing that made sense was that people were leery of HC Pete Carroll’s run-first philosophy. Metcalf’s Panini Prizm rookie card (Prizm is the gold standard when buying rookie cards) cost around $32-$33 for a Grade A, so I bought/invested in two of his Prizm rookie cards. Sure enough, the price started to rise. Before the final three weeks of the 2020 season I sold one of them for $53.00, which is about a 40% return on my investment. I am in the stock market too and while I make a nice return, it’s no 40%! Guess what? I sold too soon! Today my D.K. Metcalf rookie Prizm #343 is worth $65.00, which is basically double my money. Interesting to note after Pete Carroll came out and talked about running the ball more, Metcalf’s card slipped to $43, but in the past few months it took off again, no doubt helped by the bodybuilding photo of a shirtless Metcalf and A.J. Brown that went viral in February and Russell Wilson trade demand talks dying down. Metcalf is a small example of how I took everything I know for fantasy football and applied it buying cards. 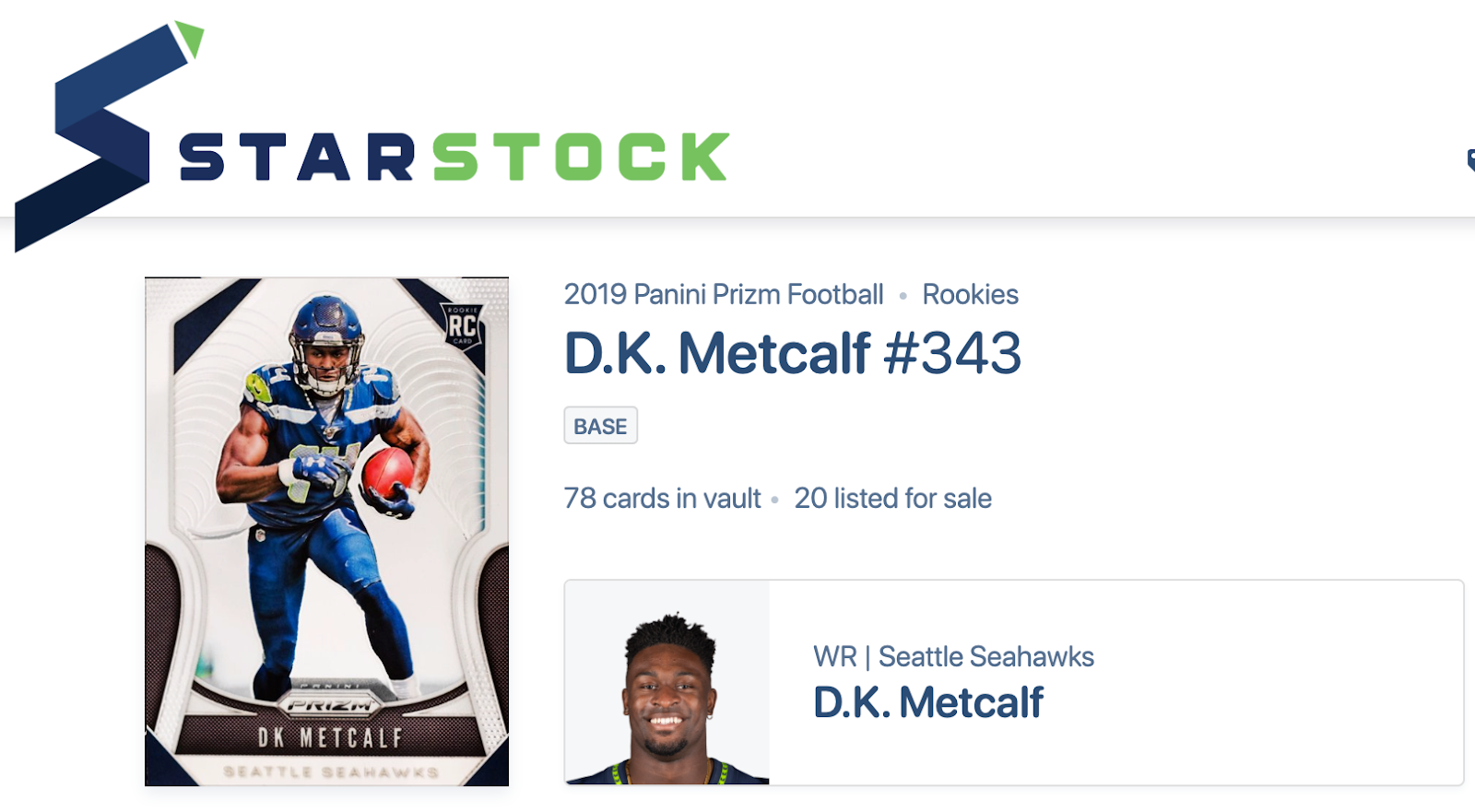 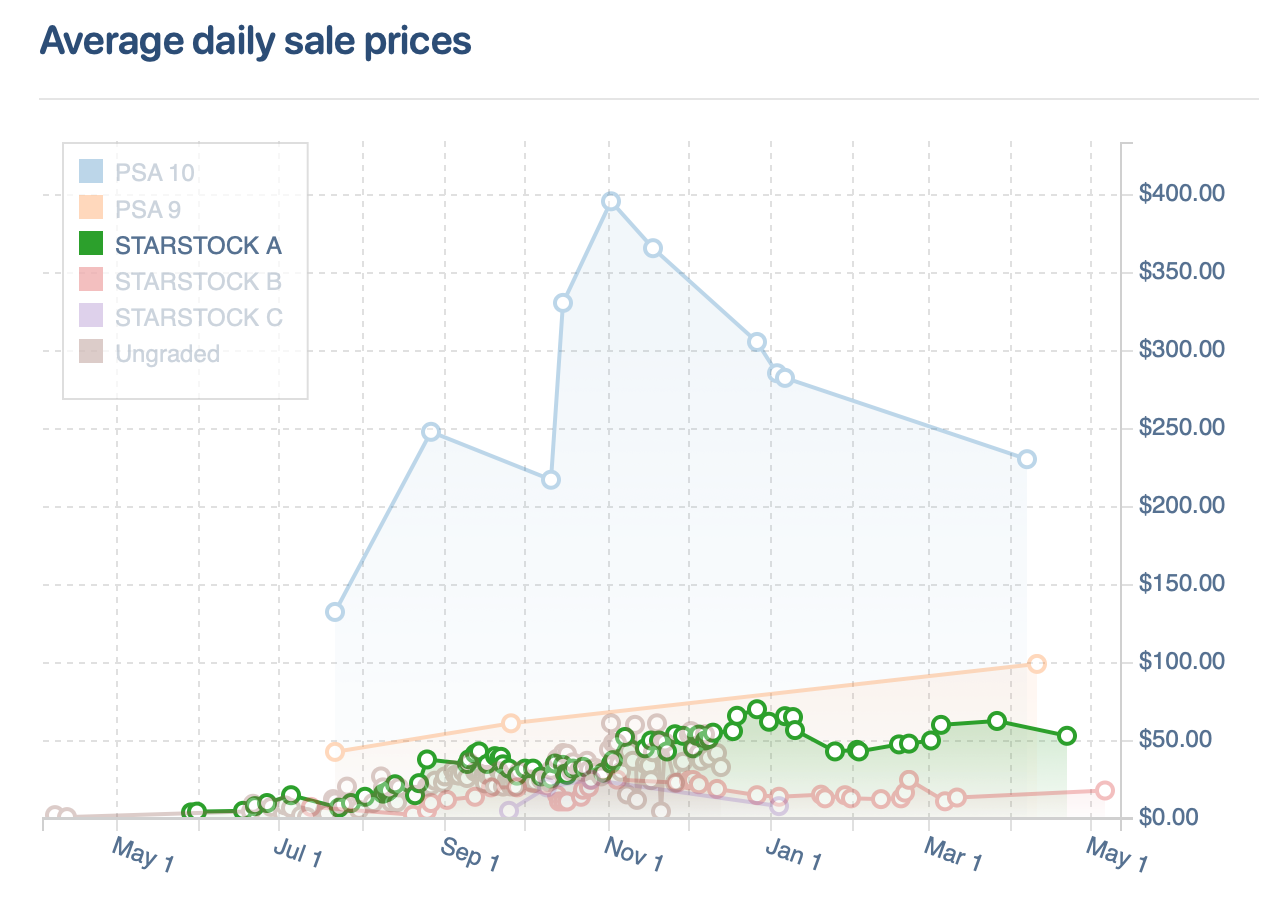 One question I get asked a bunch is what is the best card to collect for football (and it varies from sport to sport). Panini is the official NFL licensee and they have over 30 different football lines! Panini Prizm has soared in value and tends to be the rookie card of choice, though packs and boxes tend to be expensive. Donruss is more affordable and because it is less expensive than others in the Panini line, you can pull a banger (a big hit) from one of their boxes. Panini Donruss Optic is another solid and sought after line; it’s still more affordable than their higher-end products. I’m partial to Panini Mosaic cards and 2020 was the first year they did a Mosaic football line. Most folks will tell you to buy single cards when you are just starting out, which is great advice, but there is something about ripping open packs that I love.

Below is a short glossary of terms that are most useful to anyone beginning their card journey. There is a lot to learn, but you will find most folks happy to answer any questions and share their stories. I’m available in the Fantasy Points Discord for any and all questions, as are many other folks in the “Cards” channel.

The main cards in a set. If you would buy a set, the cards inside are the “base set”.

A type of manufacturer’s packaging that is typically reserved for retail stores like Target or Walmart. These boxes usually contain between 5 – 10 packs of cards.

A form of packaging for cards. Cellophane was used mainly in the 70’s to early 90’s, hence the name “cellos”. A cellophane-like substance is used today. Sometimes they are manufactured to hang on racks.

Various collectors buy a spot into a sealed box or boxes. Once all spots are sold, the boxes are opened live (usually streamed on YouTube and other channels). Spots can either be sold as Pick Your Team (PYT) or random (the random draw is done live). It’s an affordable way to have a chance at cards. For instance, a hobby box of 2020 Panini Prizm costs around $1400, but if just want a random break spot, might cost anywhere around $60 - $70. Reputable breakers will ship all cards, plus penny sleeves and top load hits.

Another form of packaging made to hang on the hooks. Just one pack Often they have parallels that are exclusive to the hanger box.

Cards that are randomly inserted into packs. Inserts are added to increase sales and are rarer than base cards.

The manufacturer stamps the print run on the card. For example if the card is stamped 13/300, you have the 13th card out of a possible 300 that were printed. 1/1 is the ultimate in numbered cards, meaning if you had a 1/1 you would have the only one in existence.

Similar to base cards, but have a different qualities to distinguish from the base cards like a glossy texture, different color border or card stock, etc.

Relics are cards with a piece of a player’s uniform or even part of a ball or stadium in them. They were once always, only Game Used. But because the demand was so high, the game used supply diminished quick. Now they have “player worn” Relics. Where they give a player a jersey, he puts it on, they throw him a ball, boom, event worn jersey.

Hobby boxes are made exclusively for card stores, while Retail is made for the likes of Target & Walmart.

Finding retail at the store, not buying it off eBay, IG, Twitter or your LCS. You are paying actual retail prices, not prices inflated by demand.

Professional Sports Authenticator is what PSA stands for. PSA is the standard bearer for grading cards and they use a 10-point grading scale, with PSA 10 being a Gem Mint card.

A professionally graded card enclosed in a hard plastic case.

Short print, as in a short run of a certain card. SPs are rarer than base cards.

A hard plastic sleeve used to protect cards. Always put a penny sleeve on your card before top loading it as an extra layer of protection. Top loaders come in different sizes depending on the thickness of your card. If you see packs of top loaders at Target, buy them! The price of top loaders has double in the past six months.

A form of packaging from the manufacture to cover a group of cards, now shortened to “pack”. Wax packs got their name from the wax-coated paper commonly used in the 70’s & 80’s. Typically packs contain anywhere from 1 – 15 cards.

We will take a deep dive into collecting in the coming articles including the various card brands and which are most desirable, best advice for those that are new to collecting as well as those that have been around awhile, group breaks and Card Market posts to keep us ahead of the curve in terms of buying and selling. Your number has been called, time to get into the game!

A high stakes fantasy player for over 15 years, Jules is an inaugural member of the National Fantasy Football Championship (NFFC) Hall of Fame and has career earnings of over $250,000. Her forte is identifying breakout and sleeper players.

Disaster Alert: Do Not Draft