Monkey Knife Fight – the fastest growing Daily Fantasy Sports site on the planet – is a daily fantasy sports operator offering a unique style of player props. Find out more about MKF and use our promo code FANTASYPTS for an instant deposit match for new users!

I’ll be playing MKF’s MORE or LESS for this Thursday’s game with a bit of pessimism about the QB’s passing yards in this game. Although Daniel Jones threw for 267 passing yards Week 1 vs. Denver, I have a feeling the likes of former 1st round draft picks Montez Sweat, Chase Young, Jonathan Allen and others on this stellar Washington defense will put tons of pressure on Jones and his NFL worst graded offensive line by PFF before the season started. The 235.5 passing yards mark is one he hit only 5/14 games last season. Due to my thoughts on the defense having a nice game and Washington utilizing the run and managing this one, I also do not believe Taylor Heinicke, stepping in for injured Ryan Fitzpatrick, will have a massive throwing day for yards. He threw for 137 passing yards vs. Carolina in the regular season and 306 passing yards vs. Tampa in the postseason last year. So give me both Taylor Heinicke LESS than 247.5 passing yards and Daniel Jones LESS than 235.5 passing yards in this one. - Nick Skrip

Another full slate on the docket for college football this weekend. Although I don’t anticipate the UCF/Louisville game being much of a contest, it’s home to my favorite MKF play of the week. The Rapidfire (5x) play pits UCF’s Dillon Gabriel, Jaylon Robinson, and Isaiah Bowser against their Louisville counterparts. I like Gabriel to out pass Malik Cunningham, Robinson to out catch Huggins-Bruce, and Bowser to out rush Mitchell. Seems like a slam dunk, especially with that multiplier.

My other play this week comes from the Maryland @ Illinois game, also in a rapid fire contest. I like Taulia Tagovaila (MAR) to pass for more yardage than Brandon Peters (ILL) and Dontay Demus Jr. (MAR) to have more receiving yards than Isaiah Williams (ILL). - Austin Nace (Campus 2 Canton)

This Sunday I will be playing MKF’s Rapid Fire, involving the QB’s and two WR’s for the Patriots vs. Jets game. ESPN fantasy analyst Matthew Berry recently noted Patriots’ Head Coach Bill Belichek’s success against rookie QB’s, and I trust the Patriots to give Zach Wilson a tough day. With Mac Jones opening up with 281 passing yards vs. a good Miami defense, I will take Mac Jones over Zach Wilson in passing yards, even with Wilson’s 19.5 yard bonus for passing yards. For the receivers, Jakobi Meyers spent 10/12 games last season under 70 receiving yards, even when the targets were high. Opening up the season with 97 receiving yards on 7 targets after having five games over 100 receiving yards last year, I like Corey Davis to have more receiving yards than Jakobi Meyers in this one despite the 1.5 yard bonus MKF gives Meyers.

This week’s Monday nighter has the Detroit Lions travelling to Lambeau field to take on the Green Bay Packers. The Packers are coming off an embarrassing loss to the New Orleans Saints that saw them put up only 3 points in a severe disappointment for fantasy gamers. The Lions lost to the 49ers in a game in which they were boat raced for 3 quarters only to storm back late to make it interesting.

Tonight’s divisional matchup has an over/under of 49 points with Green Bay as an 11.5 point favourite. Considering Detroit’s putrid defensive unit, and the likelihood that Aaron Rodgers and co. have a fire in their belly after last week’s lackluster performance, we should be able to capitalize on that to make some cheddar with Monkey Knife Fight.

Sign up today with our promo code FANTASYPTS for an instant match on your first deposit of up to $100.

My first entry is a game of More or Less. The players in question are Aaron Jones and D’Andre Swift with lines of 75.5 and 39.5 Rushing Yards respectively.

Jones faces an awful Lions defense and enters this contest looking to feast. Week 1 wasn’t friendly to the Packers’ do-it-all workhorse and he’s set to bounce back in what looks like a get-right spot against the Lions. It’s no secret, the Lions were projected as a bottom 3 rush defense coming into the season, and in week 1, we saw the 49ers undrafted rookie Elijah Mitchell go for 19 carries and 105 yards on the ground. Jones should be able to keep that train rolling and stack up the chunk plays that can help us stack chips. With the likelihood that the Packers get out to a lead, I like Jones to hit for more than 75.5 rushing yards in this one.

For Swift, his line of 39.5 Rushing yards seems low at first glance, but with the aforementioned game script expectations, and the continued involvement of Jamaal Williams, it’s a little trickier than you might think. Coincidentally, Swift missed this line by a half yard last week with only 39 rushing yards on 11 carries. That being said, I think Swift can hit the mark this week.The Packers came into the year projected to as a middling run defense overall, and specifically in the explosive rush department. Explosive plays are Swift’s bread and butter. In 2020, Swift had an 11% explosive rush rate, good for 18th best among Running Backs with at least 100 carries. In short, Swift can pop off at any given time, even on a limited workload. While his groin injury may cause some hesitation, he came into week 1 with the same issues and still showed great burst and elusiveness with 2 of his 11 carries going for 15+ yards. Give me more for D’Andre Swift! 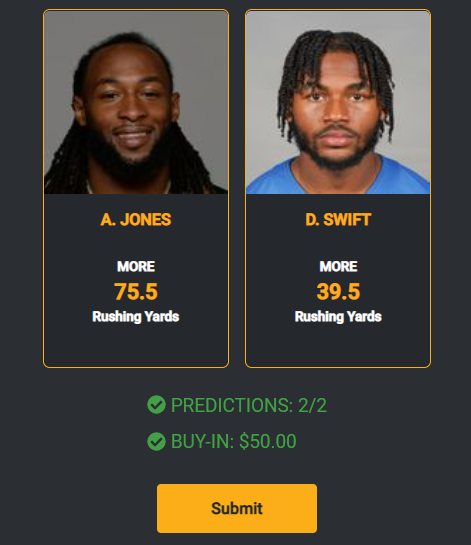 For this entry I’ll dive into MKF’s Stat Shootout and zero in on Reception Collection. In this contest, you get to choose 3 players who you think will combine to hit one of 3 reception totals: 19.5 (2x multiplier), 21.5 (3x multiplier), and 23.5 (4x multiplier). In this instalment I’ll go with the 3x multiplier and a threshold of 21.5 receptions.

The first player I’ve chosen is T.J. Hockenson. With the Lions playing catchup in Week 1, The Incredible Hock brought in 8 receptions on 10 targets as the focal point of Detroit’s passing game. I expect more of the same this week and for the rest of the season as the Lions should be behind often resorting to the air in their efforts to claim knee caps.

My second entrant into this Reception Collection is Davante Adams. Sure, this one seems like a silver platter, but when it’s served up I have no problem knocking it down. As long as Aaron Rodgers is the Quarterback, Adams will eat. The proof is in the pudding too with Adams averaging 7.5 receptions per game over the last 2 seasons with A-Rod at the helm. Pull out your sharpies and mark him down for another 7+ catches once again.

The final entry in the quest to triple my money is running back D’Andre Swift. The sophomore Running Back looks like he’s second in line on the target totem pole for Detroit. In week 1, he had 8 receptions on 11 targets and there’s no reason to think he slows down. It wouldn’t be a surprise to see double digit targets again in this game with Jared Goff’s penchant for short passing and Swift’s elite receiving talent as the diamond in this rough looking squad in the Motor City. 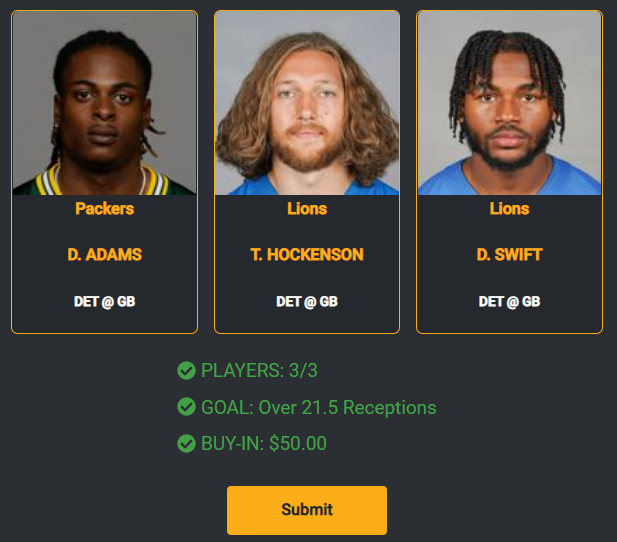