It is really hard to beat Vegas and the other NFL sportsbooks. In NFL gambling circles, you’re considered either incredibly lucky or tremendously bright if you manage to win on even 55% of your bets (just barely better than a coin flip) over a large enough sample. With millions of dollars at stake, Vegas is incentivized to make the sharpest lines possible, and for the most part, they’re extremely successful at doing so. For this reason, each offseason, we try to spend some time looking at betting lines and trying to determine what these lines might mean for fantasy.

Today, we’re going to look at DraftKings Sportsbook’s 2022 projected win totals in contrast to that team’s actual 2021 win totals. We are then going to try to determine what this might mean for the top fantasy players on the teams projected to improve the most or least. Our most recent article looking at the most and least gamescript-dependent players in fantasy will help aid in our analysis. 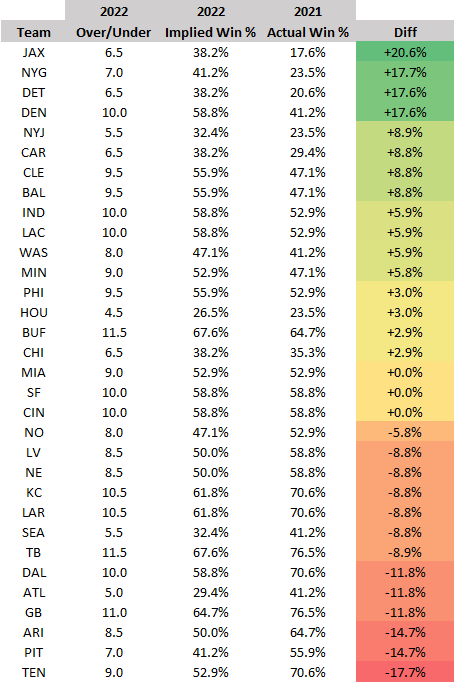 In our last article, we looked at the fantasy splits of various players by whether their team was trailing or leading. We noted that running backs tended to score a higher percentage of their fantasy points when leading, while the opposite was true for quarterbacks, wide receivers, and tight ends.

Over the past five seasons, winning teams average 19.4 FPG at the quarterback position. Losing teams average 14.5. However, over the same span, teams trailed on 44% of their offensive plays, but 51% of all quarterback scoring occurred while trailing. Teams led on 33% of their offensive plays, but only 30% of quarterback scoring occurred while leading. These splits were nearly identical for wide receivers and tight ends.

This may seem contradictory and counterintuitive, but really, this has to do with a few different factors:

So, while winning teams score more fantasy points at the quarterback position on average, it can also be true that most quarterbacks are more productive when trailing. Wide receivers and tight ends also average more fantasy points when victorious and are more productive when trailing. This is not true for most running backs, however.

With these factors in mind, here are my top fantasy takeaways for the teams projected to climb or fall the most in wins next season.

The Jaguars are expected to make the biggest improvement of any team this year, and, well, I guess you can call that the Urban Meyer effect. Meyer might have been the single-worst professional football coach of all time, and Jacksonville won just 3 games during a season that one Jaguars player described as “mentally exhausting.”

Needless to say, the switch from 13 games of Urban Meyer to (presumably) 17 games of Doug Pederson at head coach should propel Jacksonville to a better season than they had in 2021, at least according to Vegas. And had Jacksonville not drafted Travis Etienne in 2021, that would likely be outstanding news for James Robinson. But it’s difficult to love Robinson (even at his current price tag of RB49) given he’s still recovering from a torn Achilles in late December and Etienne will likely be the primary pass-catching RB while also earning a decent percentage of rushing work. The only player in this backfield I’m drafting is Etienne (sparingly), as we know he’s fully healthy and should provide much stronger value in the passing game — which is still crucial on a team that’s implied for the 5th-fewest wins by oddsmakers.

The Giants are expected to win 3 more games than they did in 2021 (4), which is great news for Saquon Barkley. New York has gone just 9-31 in the 40 full games Barkley has played as a Giant in his career, and he’s managed 25.8 FPG in wins, but just 17.6 FPG in losses. Based on those career splits, Barkley would average about 21.0 FPG should New York win 7 games this season – a mark that has ranked no worse than RB4 in each of the last 3 seasons. It should go without saying that I’m quite bullish on Barkley this season relative to his RB9 ADP, as he’s my 12th-ranked player (RB7) in our best ball rankings.

Based on yesterday’s article, this appears to be bad news for D’Andre Swift. But looking at gamesplits, we notice that Swift has averaged 17.1 FPG in wins, but 14.8 FPG in losses – suggesting he could actually benefit from the Lions winning more games. Remember, Detroit winning more games should mean a better offense (more points per game) which translates to more scoring opportunities. While Swift’s receiving role may suffer from more positive gamescript, he’s been the best playmaker in Lions’ camp and should see all the touches he can handle this season, so I’m not sure the implied improvement in Detroit’s record can be considered much of a negative.

Denver is tied with Detroit for the 3rd-biggest implied record improvement in 2022, and that can be easily attributed to the arrival of Russell Wilson. Wilson should increase offensive efficiency, which should lead to more red zone drives, and thus, more scoring potential for the entire offense. This obviously bodes well for the Denver ground game, and at least based on yesterday’s article, specifically Melvin Gordon – who was one of fantasy’s most productive players in positive gamescript. But I have a hard time viewing Gordon as the correct “upside wins championships” pick in large-field best ball tournaments (ADP: RB37) given the talent backfield teammate Javonte Williams possesses (1st in missed tackles forced rate last season). Gordon and Williams seeing identical workloads on the ground last year (203 carries each) was certainly confounding, but as I noted in yesterday’s piece, Javonte’s heavy involvement in negative gamescript suggests he’s the more complete RB (on top of his undeniable talent). But once we factor in Broncos’ OC Justin Outten’s comments that this backfield group would be on a “pitch count” – it’s hard to have any takeaway other than “things are murky”. Both Williams and Gordon are likely league-winners if the other gets injured, but barring injury, we are likely looking at a frustrating committee where neither player is able to fulfill their best-case scenario. So, like I said yesterday, I’ll be taking swings on both players, but won’t be seriously overweight either guy.

The Cardinals are implied for 2.5 fewer wins than they had in 2021, and this is probably bad news for TD-dependent workhorse James Conner. Conner averaged just 2.6 targets per game last season (less than Jonathan Taylor), but Graham Barfield did note that Conner was actually one of the better RBs in losses last season, at least by FPG splits. So, maybe Conner isn’t a big loser in the event the Cardinals perform drastically worse than they did in 2021. So should we look elsewhere? Well, Kyler Murray’s fantasy output has been drastically worse in losses, so he might actually be the guy to fade based on this data. In his career, Murray has averaged 24.8 FPG in wins, but just 17.3 FPG in losses. But, based on those splits, we could still imply Murray for 21.1 FPG this year, which would’ve been good enough for QB6 last season. So, Murray might suffer from the additional losses, but likely not enough to make him worth fading at QB5. And, for what it’s worth, I’m fairly sympathetic to the upside case for Murray that Scott Barrett laid out here.

Pittsburgh is implied for just 7 wins after winning 9 games in 2022, but I wouldn’t worry about Najee Harris. Harris was the definition of a bell cow last season, ranking 1st in snap share (84%), 2nd in touches per game (22.4), 5th in targets per game (5.5), and 2nd in XFP/G (19.6). And as I noted in yesterday’s article, bell cows (like Harris) thrive in all gamscripts because they are so heavily utilized as both rushers and receivers. Pittsburgh has implied they are looking to reduce Harris’ league-leading snap share from last season, but not his league-leading 381 touches. If that’s the case, I’ll gladly take the potential 2022 touch leader at his current ADP (RB6), even with the risk he sees his snap share fall ~10%, as a 75% snap share would still rank ~RB1.

No team is implied to take a bigger step back in 2022 than the Tennessee Titans. And this should trigger some immediate concern for Derrick Henry, who has been the archetype of a gamescript-dependent RB over his career. Just how big of a deal are 3 fewer implied wins for Tennessee? Well, I think Scott Barrett summarized it best in the 2022 Bell Cow Report:

Tennessee has won 73.3% of their last 30 games with Henry on the field. And, over the past three seasons, Henry averages 22.8 FPG in wins (~RB1) but only 11.8 FPG in losses (~RB29). Tennessee is expected to win only 53% of their games this year, which means (based on these win-loss splits) we should expect Henry to average only 17.6 FPG (~RB9). Therefore – at least based on this one variable – Henry appears exceedingly risky and at least a little overpriced (ADP: RB4) in PPR leagues.