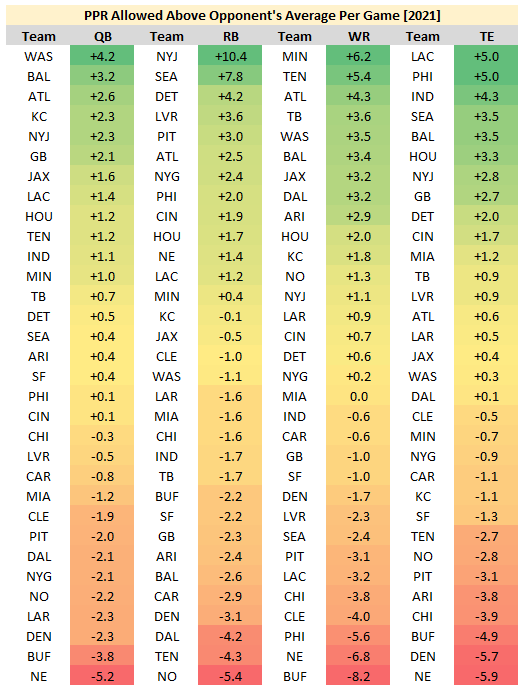 Ah then, you might ask, do defenses get the benefit of being “tough” matchups because bad QB play against them is dragging the numbers down? Not for this study. The strength of schedule (SOS) average used in this study controls for quality of opponent by eliminating a QB’s own performance against a defense when measuring that individual’s SOS. So this SOS study filters out the notion that the quarterback being studied was responsible for his own schedule difficulty — I measure the QB’s SOS by measuring how his peers performed relative to their average against a particular defense. In essence, the defenses playing Baker Mayfield don’t simply look tough statistically because they were playing Baker Mayfield during a bad season, because I control for that.

Calculating these numbers for all teams and then applying the full-season average for all players quantifies in real terms which players had the easiest and most difficult schedules for fantasy last year. We can also use these numbers to project out strength of schedule for each team and each position in 2022.

While this methodology isn’t perfect — of course roster turnover and coaching changes will complicate things — strength of schedule doesn’t not matter. This data is still far more actionable than it is not. In fantasy football — like in poker — there may only be small edges to be gained, but those small edges can be compounded to yield a massive advantage. And they must be taken advantage of… and are, by the most dominant players. That’s the case with strength of schedule. It’s another small edge to be realized, and at the polar extremes, it might matter a lot more than you’d expect. 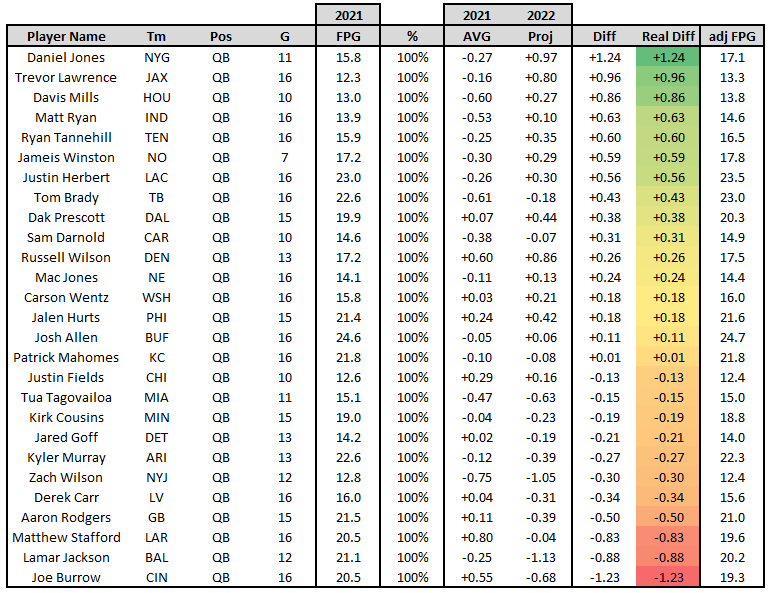 1) No quarterback will benefit more from an improved schedule this year than Daniel Jones. (Explained in more detail in the introduction.)

In addition to the league’s most-improved strength of schedule – and also the league’s best postseason schedule (+2.10) – Jones has a major coaching upgrade (Joe Judge to Brian Daboll), and sport the best supporting cast of his career. Kenny Golladay and Saquon Barkley dealt with injury throughout the 2021 season, while Kadarius Toney and Sterling Shepard also missed a combined 17 games. The Giants have since added Round 1 OT Evan Neal and Round 2 WR Wan’Dale Robinson.

Jones has gained at least 45 rushing yards in 24% of his starts over the past two seasons, not far off that of Josh Allen (27%). And he’s flashed a sky-high ceiling throughout his career, hitting at least 27.5 fantasy points in 16.3% of his career starts, which ranks sandwiched in between Aaron Rodgers (16.7%) and Joe Burrow (15.4%) over the same span. So, add it all up and Jones looks like an ideal streaming candidate for redraft leagues, and a strong value in best ball leagues (ADP: QB25) given his high weekly ceiling. As an added bonus, his top stacking options are all exceedingly cheap in best ball leagues: Kadarius Toney (WR47), Kenny Golladay (WR54), Sterling Shepard (WR92), Wan'Dale Robinson (WR93), and Ricky Seals-Jones (TE41).

2) I think the odds are good we will see Kenny Pickett starting at some point this season. Even if he can’t beat out Mitchell Trubisky in training camp, I have a hard time imagining Trubisky will hold onto the job for long, especially after Pittsburgh’s gauntlet-like schedule to start the season. The Steelers have the overall toughest schedule through the first five weeks of the season (-1.70), and then the 5th-softest schedule across the remaining 12 weeks (+0.57). So, don’t be surprised if the leash gets pulled on Trubisky some time prior to Week 6, and Pickett puts up better numbers in his stead.

3) Trevor Lawrence is an ideal late-round target for QB-streamers. He has by far the softest schedule over the first five weeks of the season (+1.60), including a juicy Week 1 matchup against a Washington defense which gave up the most schedule-adjusted FPG to opposing QBs last season (+4.2).

That said… While I like Lawrence’s upside – he was labeled as a sure-fire can’t-miss Andrew Luck-caliber prospect coming out of college, and then was saddled with (arguably) the most incompetent coaching staff ever assembled – I’m more pessimistic than most. Lawrence was labeled as such by the NFL Mock Draft cognizanti, but multiple film experts I trust had him ranked behind Zach Wilson and/or Mac Jones. And Lawrence’s rookie season wasn’t just bad, it was apocalyptically bad. He led the league in interceptions (17), and from Weeks 9-16, Lawrence threw just one touchdown pass over eight games (273 passes thrown). Lawrence’s 7 games with 24-plus passes and zero passing touchdowns is the most by any rookie QB ever, and is more than Deshaun Watson, Patrick Mahomes, Josh Allen, and Baker Mayfield have in their respective careers.

4) Tua Tagovailoa was the most matchup-sensitive QB for fantasy last season (+/-6.1), averaging 18.2 FPG in matchups ranking better than average (six such games) and only 12.2 FPG in matchups ranking tougher than average (six such games). Unfortunately for him, his schedule is a bit tougher this season (-0.15) and ranks 4th-toughest overall (-0.63).

That said, I don’t have any issue with Tagovailoa’s current price-tag (ADP: QB18). He averaged 16.2 FPG in games started and finished last season (QB16). After averaging 16.6 FPG in games started and finished (minus benchings) in his rookie season. Following the arrival of Tyreek Hill, and now another year removed from hip surgery, I believe an Alex Smith 2017-like season could be within Tagovailoa’s range of outcomes.

5) Jalen Hurts was similarly matchup-sensitive (+/-5.0), averaging 25.0 FPG in matchups ranking better than average (eight such games) and only 20.0 FPG in matchups ranking tougher than average (seven such games). If you’re in a trade-happy league, I’d consider drafting Hurts alongside a competent QB2 (perhaps Deshaun Watson would be ideal). You may be able to sell him for a small fortune by Week 6 – Philadelphia has the 2nd-softest schedule through the first five weeks of the season (+1.54), and the 4th-toughest schedule in the fantasy playoffs (-1.53).

6) Joe Burrow ranks as the QB5 by ADP, five spots ahead of Dak Prescott and six spots ahead of Matthew Stafford. Last season Burrow finished 10th in fantasy points per start (20.5), sandwiched in between Prescott (20.7) and Stafford (20.4).

Burrow was gifted the league’s 4th-softest schedule last year (+0.55), but now has the 3rd-toughest projected schedule this year (-0.68), resulting in the worst projected change in schedule, worth in real terms -1.23 FPG off his 2021 average. In other words, he’d rank 1.8 FPG behind Prescott and 0.3 FPG behind Stafford by schedule-adjusted FPG.

I typically avoid non-Konami Code QBs being drafted this high, but in light of Burrow’s difficult schedule – which also includes the position’s toughest postseason schedule (-2.77) – he’s an especially easy fade for me at current ADP. Prescott and Stafford, however, are far more enticing to me at cost.

7) Cleveland’s QBs will have positive matchups in five of their final six games, including the league’s 2nd-softest playoff schedule (+1.73), which includes a best-possible matchup against Washington in the championship round (+4.2). Deshaun Watson currently ranks as the QB15 by ADP. But through four NFL seasons, Watson has finished 6th (23.1), 2nd (21.4), 5th (20.7), and 1st in FPG (24.1). So, even if he’s suspended for 6-8 games to start the year, I’d consider gambling on him (and his league-winning upside for later in the season, when points matter most) at that ADP in non-best ball leagues.

8) Aaron Rodgers could be an intriguing mid-season trade target. He has the league’s 3rd-toughest schedule through the first five weeks of the season (-1.18), and then a perfectly neutral schedule across the remaining 12 weeks (0.0). Perhaps you can acquire him cheaply in Week 6 if his owner has become disappointed with his production and is growing impatient.

9) During CBS’ Week 1 broadcast (CLE @ KC), Tony Romo had this to say (unprompted) about Zach Wilson: “He’s going to be really good. Now, their team is a work in progress… But, you see the talent? Oh my gosh! He’s going to be amazing in 2-3 years. I mean, this year they’re going to struggle and he’s going to look average… But I can see the ceiling is very high.”

Prior to the NFL Draft, various anonymous scouts said the following: “He will not be the 1st pick in the draft, but he should be.” Another scout said: “He’s a combination of Kyler Murray and Patrick Mahomes.”

Wilson fell well short of those loft comparisons in his rookie season, finishing 3rd-worst in PFF pass grade (54.8) and dead-last in passer rating (69.7). Really, so much – chiefly, the success of my biggest fantasy man-crush: Elijah Moore – hinges upon Wilson taking that crucial next-step, ideally following the career path Romo outlined above.

Obviously, that remains to be seen. But, I like the Wilson-Moore stack quite a bit for best ball leagues. There’s a lot of volatility to the Wilson projection; it wouldn’t shock me if he again ranked as one of the worst QBs in the league, to Moore’s detriment and my great disappointment. But it also wouldn’t shock me if Romo was right, and, now buoyed by a massively improved supporting cast, Wilson took the league by storm while making a Josh Allen-like sophomore leap.

Unfortunately his schedule isn’t doing him many favors. The Jets have the league’s 2nd-toughest strength of schedule (-1.05) this year.

Over the last three seasons Baltimore has finished 1st (+249), 1st (+165), and 19th (-5) in point differential. Add to that their RB1, RB2, and RB3 all suffering season-ending injuries in training camp, and Baltimore had no other choice but to unleash Jackson and lean atypically pass-heavy (57%, up from 45%). Unfortunately, the results weren’t great.

Perhaps Jackson was never meant to be a high-volume thrower. Perhaps he thrives only on hyper-efficiency, and needs an effective run game to be successful for fantasy. And thus, that a healthy J.K. Dobbins and Gus Edwards will do wonders for him in 2021. But then again, perhaps Jackson has finally been exposed as a (severely) limited passer, and this efficiency decline is part of a larger trend. Truthfully, I’m not too sure, but I don’t think this risk (and his poor strength of schedule) is being factored into his ADP (QB4). And, as such, I’d much prefer Kyler Murray who is being drafted a full three rounds later.

11) Justin Herbert finished 2nd in fantasy points per start last year (23.3) and currently ranks 2nd by ADP. He gets a significant schedule boost this season, worth an additional +0.56 FPG to his 2021 average. I think Herbert has untapped and underrated Konami Code upside, but in general, I don’t like to draft non-Konami Code QBs that high. But I believe strongly in his talent, so, if I go that route, I may have to bet on him to win MVP as an insurance policy (+1100).

Wins, Losses, and Running Back Production