The following will be a quick-hitting recall of last week’s previous injuries with any tidbits of news or assessment that can be gleaned during the early stages of the week. This article exists to cover only new injuries to fantasy-relevant players as most weeks some player injuries end up slipping through the cracks or are just relevant enough to crop up in a meaningful way down the road. Later this week the Injury Report will be published that will include all player injuries new and old. And remember- don’t over-react to the Wednesday practice report.

These teams are on bye this week:

Kittle suffered a (likely) Lisfranc fracture on Sunday and the reports are he'll be out for 8 weeks. Yes, this is bad but there's a small chance he can be back in 4-6 weeks. According to this study on 300+ subjects, patients with simple/non-displaced fractures can be back anywhere between 4 and 8 weeks. Don't count on it-- just know it's within the range of outcomes. If you're desperate, maybe stash him and see what happens. It's not the most likely outcome, but it's a swing-for-the-fences move with a massive advantage if he ends up returning before 8 weeks. Here's the disclaimer: if he has surgery, this strategy is out the window.

Godwin’s status is best summarized by my tweet below. After 73% of players miss no time due to a wrist/hand/finger injury, that leaves 27% of the pie. Of that 27%, 16% of players go on to miss 13 days or fewer. Godwin’s surgery was October 27th meaning Week 9 marks day 12 post-op. Godwin’s practice status will tell us a lot of what we’ll need to know but as of today, he’s as close to a coin toss as it gets. 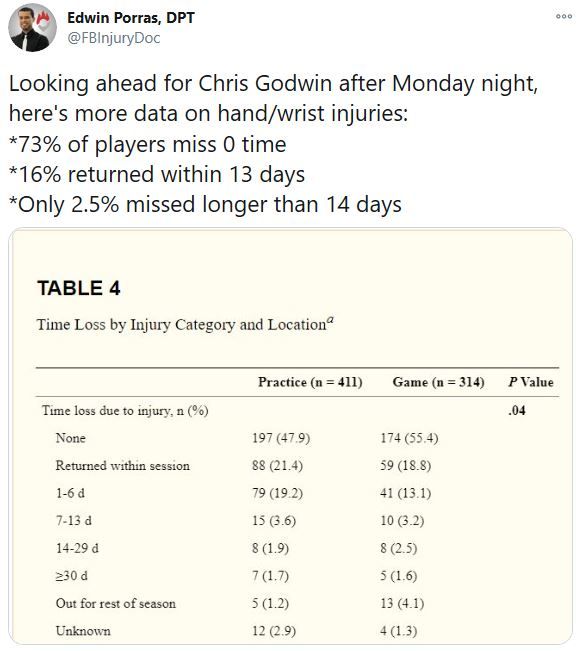 Jones was limited at practice on Monday. Here are the facts about calf injuries in general: The average return to play time is 17 days (Jones’ injury was exactly 14 days ago this Thursday). The second set of facts is that from 2016 to 2019, 37/81 (45%) of instances in which a skill player had a calf injury did they end the week as out or doubtful. Zooming in, 5 players were responsible for a whopping 23 instances of these out or doubtful tags. Worded differently, since 2016 only 5 players have missed more than two games with a calf injury. Don’t get me wrong- Jones is truly cutting it close this week and will be volatile if active, but given the A.J. Dillon COVID situation, I think Jones goes.

This one is a bit mysterious in terms of specifics. The hope is Taylor is a limited participant followed by consecutive days of practice but if he’s battling a “minor” high ankle sprain, he’ll be playing through pain. If it’s a lateral sprain, re-injury is likely. Monitor him closely. As of now, he’s expected to play.

I’m not sure what’s going on here to be completely honest as the video doesn’t show anything except him limping off the field. Given the fact he doesn’t have any previous history of true hip issues, I wonder if this is actually a groin strain seeing as he’s already had muscular strains this year. He’s been ruled out for Week 9 and could miss a couple of weeks.

Guy can’t catch a break. Much like Golladay, his injury is vague but it’s possible he simply re-aggravated his MCL sprain. Another possibility is potential cartilage damage a la {Miles Sanders|RB|PHI}}. As of now, don’t expect to be with Coleman for the foreseeable future.

The reality is that these injuries take 4-6 weeks to completely resolve due to limited blood supply to the syndesmosis. That means a re-aggravation for Jimmy G was never out of the question. Now he’ll miss at least a month if not longer. Very rarely do players have the tight rope procedure unless it’s absolutely necessary, but at the very least the Niners will be without Garoppolo through November. I wouldn’t be surprised if they shut him down altogether depending where they are in the brutal NFC West at that point.

Make sure to be on the lookout for the comprehensive Week 9 Injury Preview published on Friday mornings for a complete rundown leading into the week.