Luckily for us, as we head into Week 4, half the league didn’t get hurt last week. There weren't any 3 TD games this week, but some extremely productive games nonetheless. And the card market certainly has taken notice.

Reminder: We love StarStock.com’s vault of over 1200,000 cards. If you want just one resource for options, purchasing, and organization, they’re the site to check out. Images and stock prices courtesy StarStock.

The writing was on the wall after Week 2. He went from 3 carries in Week 1 to 12 carries in Week 2. And he was extremely productive with those 12 carries. Week 3 saw an even bigger workload with Henderson getting 20 carries and turning that into his first 100+ yard rushing game. He ended the day with 114 rushing yards and a TD and one reception for 6 yards. He made last week’s "Buy Low Opportunities" so hopefully you picked some up. 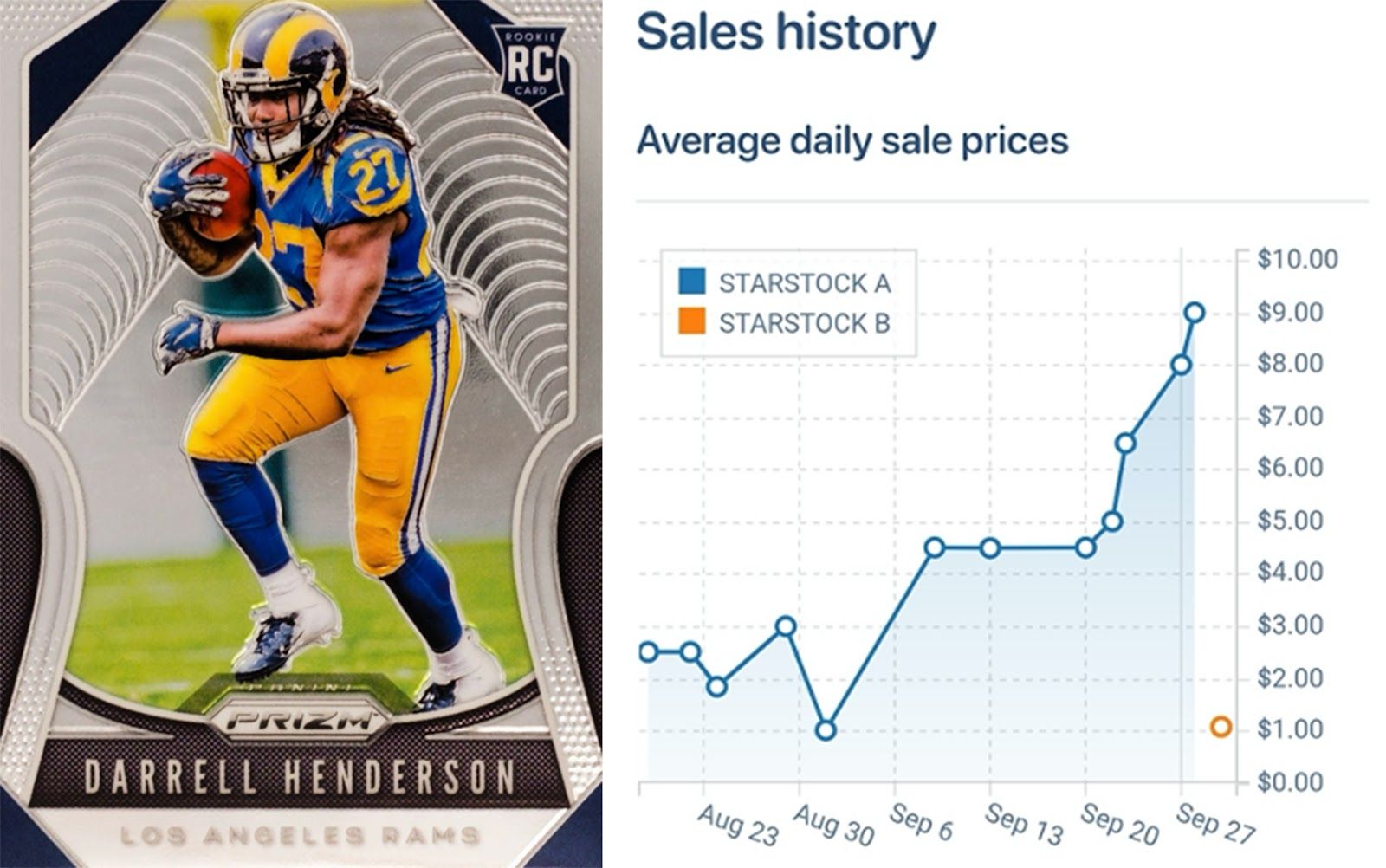 Raise your hand if you thought after 3 weeks, Josh Allen would be top 3 in the MVP race. Now put your hand down, and stop lying. Thinking he'd be great for fantasy is one thing, thinking he'd be this good for real football?… Through 3 games, he has 1,038 passing yards, 10 TDs and 1 INT. He has also rushed for 84 yards and 2 TDs. Guys, the Buffalo Bills are 3-0. Rumor has it, there's a folding table shortage at stores, right now, in Buffalo. 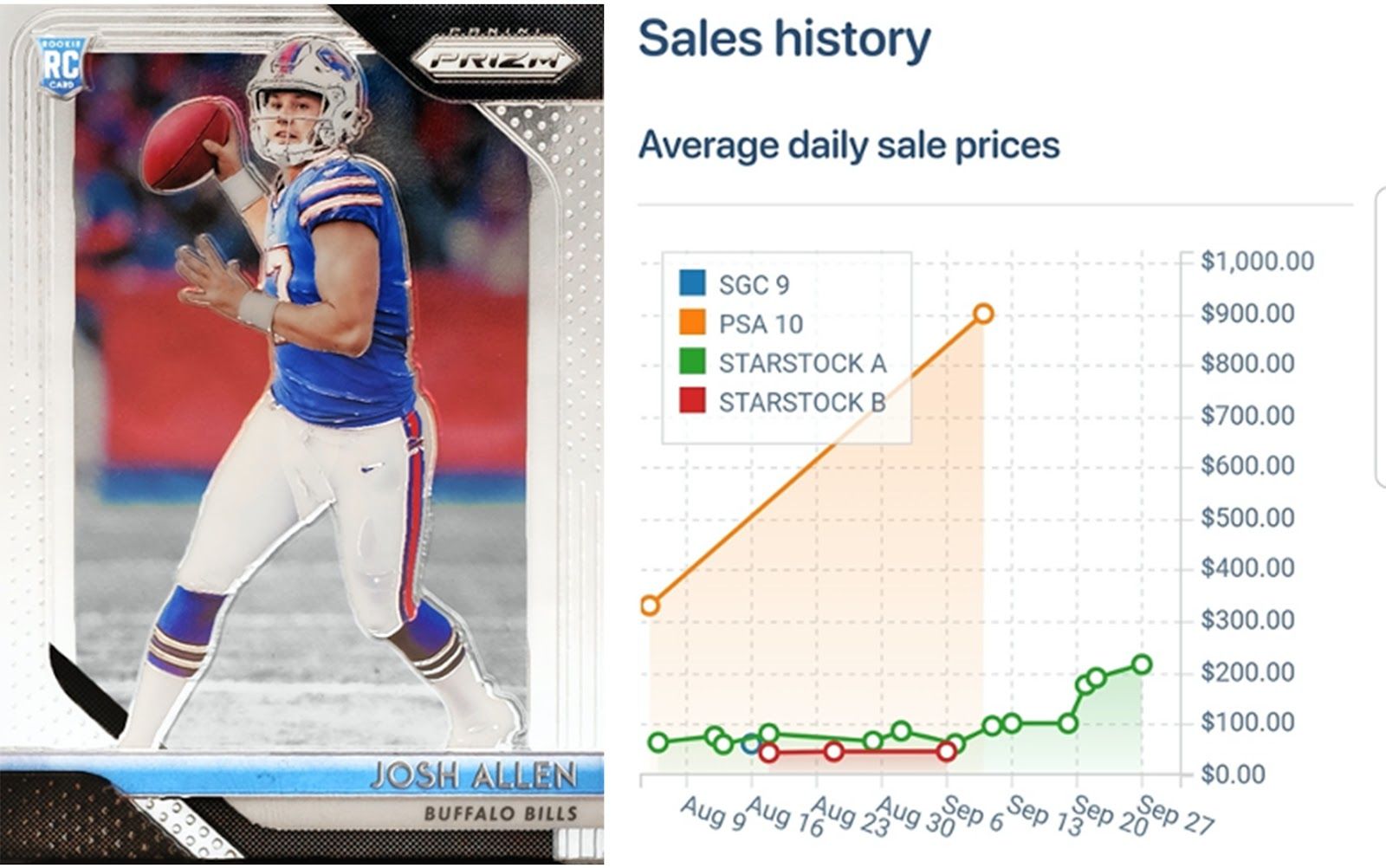 Golly, look at that line for graded PSA 10! Next one will probably sell for 4 figures at this point. Over the last week his cards given the grade Starstock A have doubled in price. The Josh Allen hobby hype train is gaining speed. Don't be shocked to see Allen on their list in the future if he keeps playing like this.

If you're reading this article and not checking on the Discord card channel, you need to start immediately. A few members picked up Gaskins for as low as $0.18. While I like what I've seen from Gaskin, consistently starting a Dolphin RB in fantasy isn’t the best feeling in the world. But having a card or 2 of one that you could have potentially bought for pennies can't hurt; and in this case, picking up a Gaskin card clearly did not hurt 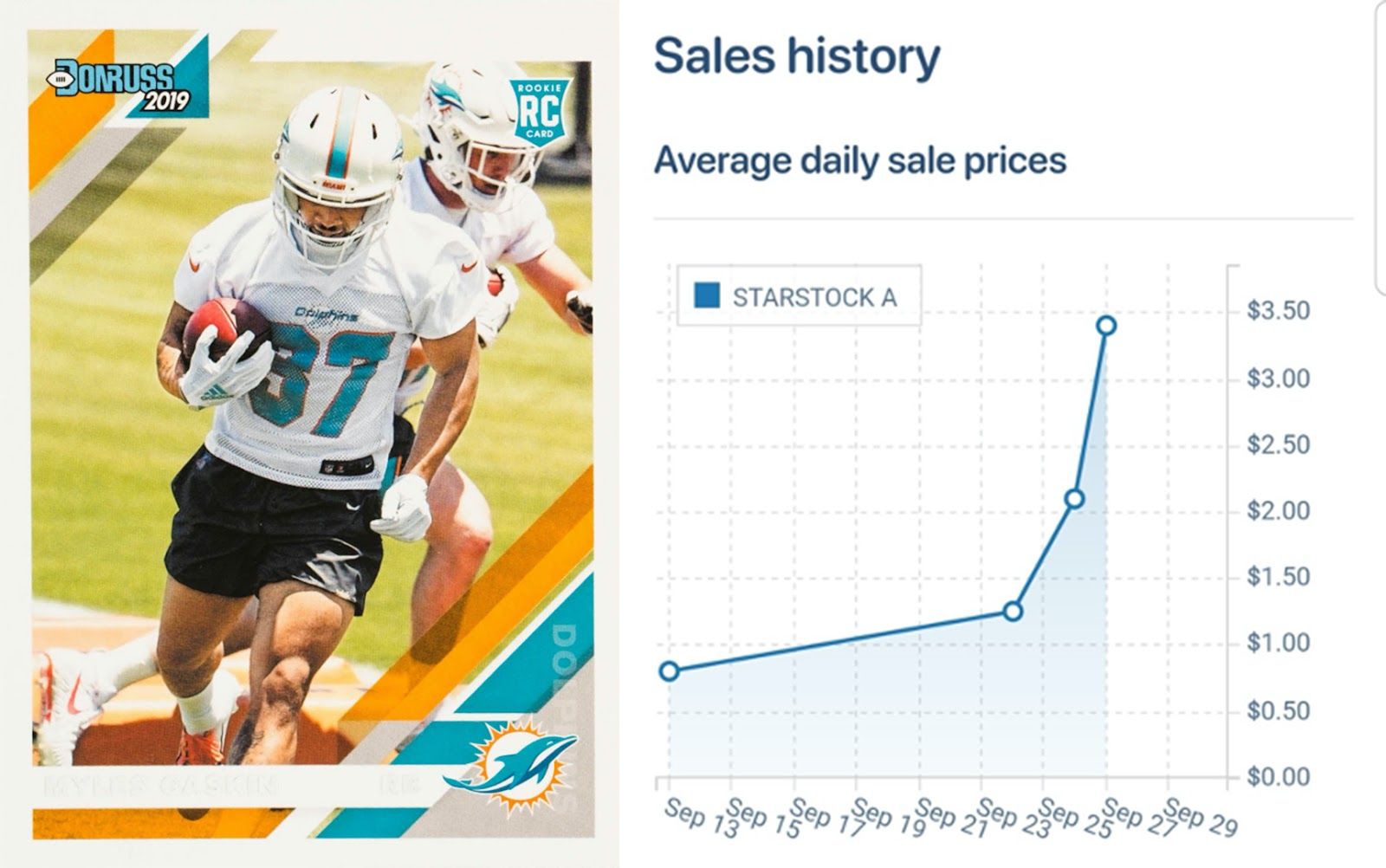 In the last 2 weeks Gaskin saw his cards go from $.75 to $3.50. A solid 450+% increase. What was surprising about this data to me is his Prizm RC's are still around $5 on Starstock. Honestly, the Prizm seem like a buy to me right now.

It looks like the Trubisky era has finally come to an end in Chicago. And as soon as Foles came in, he produced. While he was productive, admittedly he didn't look great, but compared to Trubisky it's hard to look bad. 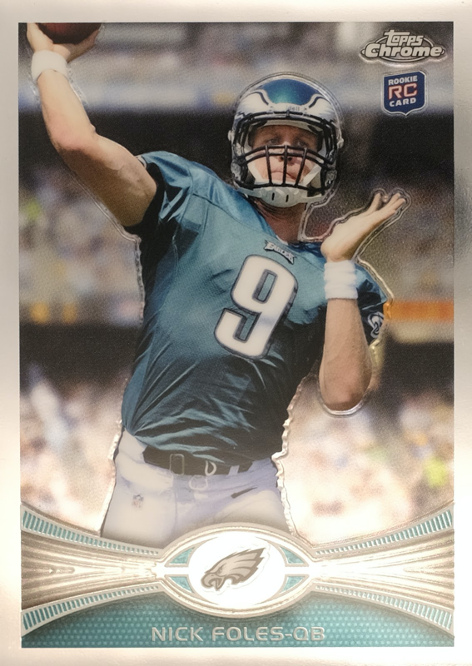 While I don't think Foles is anywhere near elite, I do think he's good enough to potentially get the Bears to the playoffs. With the Bears’ big fan base, a playoff appearance will surely increase their card market. 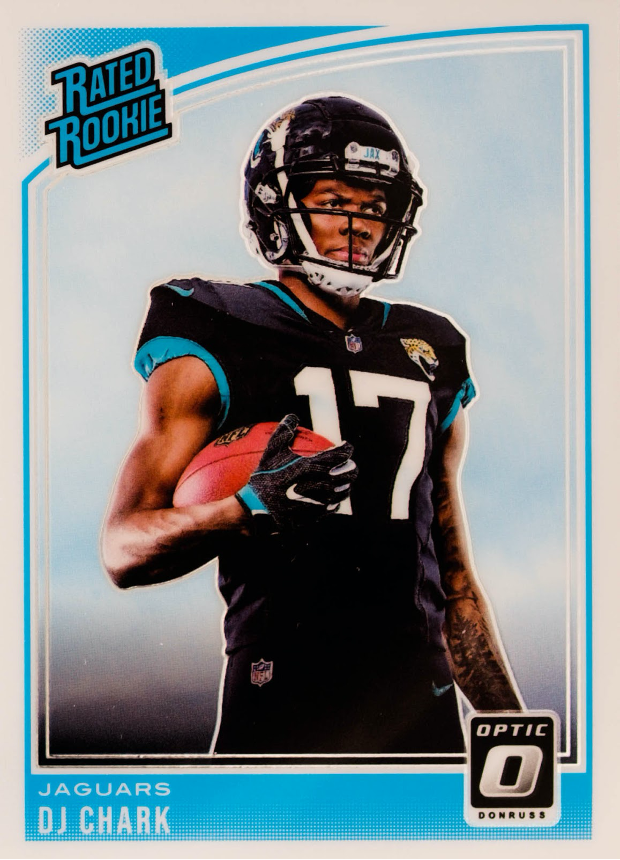 I love Chark, and he can't come back soon enough. It’s clear Gardener Minshew struggles without him on the field. The Minshew/ Chark started off a little slow this year, but I don't think that will continue through the season. Any given Sunday he has the potential to walk away with 2 or more TDs. If you've been following along this season, prices immediately rise upon multiple TD performances. You are going to want some of them in your collection to cash in when that happens. 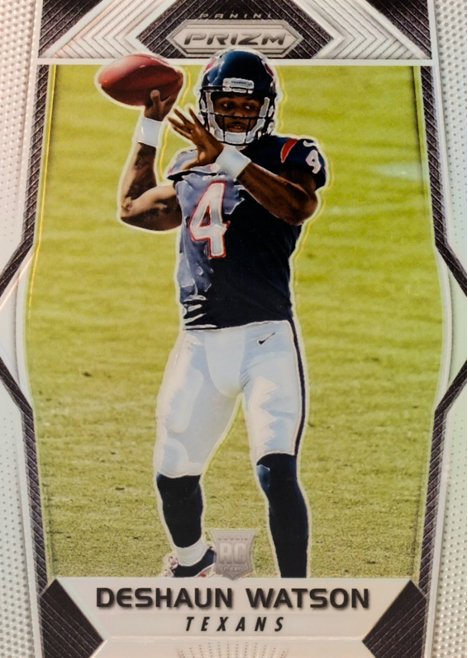 That Texans OL is atrocious, and hopefully doesn't get Watson killed. The Texans also have had a terrible start to the season, but they have been playing top notch defenses and his schedule is about to open up. Leading into the season his PSA 10 Prizm was selling for around $1,000. His last one sold on eBay for under $650. We know Watson is an elite Talent. We also know that the ceiling for the PSA 10 is at least $1,000. A big game against an easily beatable Vikings defense and his prices will instantly see an uptick. 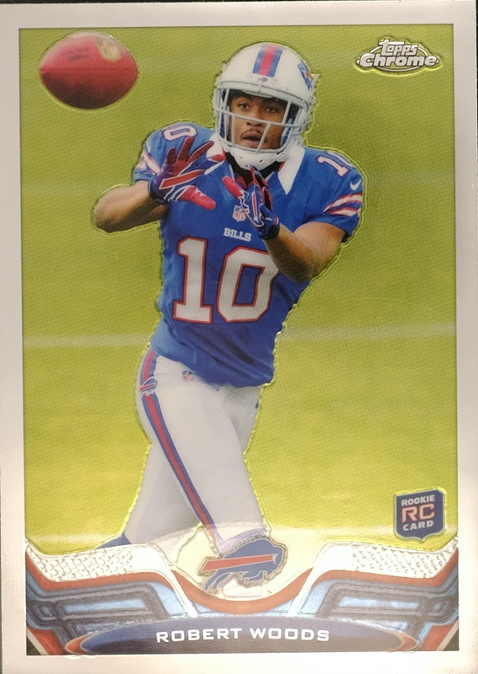 I cannot believe this card qualifies for this section. You can find these on Comc.com and eBay all day for under $2. That's genuinely mind blowing to me. Pick up a couple, no way these cards stay this cheap all year. There's no way.

Each box comes with the 6 card set of Joe Burrow, Tua Tagovailoa, Justin Herbert, Jordan Love, Jacob Eason, and Jake Fromm. You also get an autographed Jersey from either Tua Tagovailoa or Justin Herbert. There are 19 different parallels in the set, all numbered to /50 or less.

A box of Zenith consists of 1 pack with 6 cards. You get 6 cards per box, that's it. Every box contains one Base Card, one Rookie Card, one Parallel or Insert, one Relic Card, and 2 Autographed cards.

These were available today on Panini's site in Dutch auction form. They started at $600 a box and every 5 minutes the price dropped. They sold out at around $160. If you want to give a box a try, don't pay more than $200, and you're going to want to sell your hits immediately. I don't really suggest buying these, but they're certainly a better buy than the Leaf Metal QB Collection.

Again, if you are interested in learning about cards, reach out in Discord. I'm there to answer any questions you may have about the hobby.