That’s what I’ll be doing in this article, using both resources to help me highlight the top main slate DFS Value Plays in any given week. Here’s Week 9:

Note: This is just the first-pass publish of the DFS SuperModel. The SuperModel and our projections will continue to update throughout the remainder of the week.

According to our projections, Conner is popping as the top overall RB value on both DraftKings and FanDuel. Here’s what we had to say about him in Start/Sit:

Since 2018, Conner averages 21.5 FPG in wins and ties, but only 11.5 FPG in losses. He averages 24.0 FPG in games Pittsburgh has won by 7 or more points. Good news! The Steelers are 14.0-point favorites, and against a Dallas defense that ranks 3rd-worst in YPC allowed (4.97) and 2nd-worst in rushing FPG allowed (19.9) to opposing RBs. Start Conner with confidence as a mid-range RB1 this week, and especially with potential touchdown-vulture Benny Snell seeing his snap count dwindle to 6 and then 0 over the past two weeks.

Cook went nuclear in Week 8, scoring 48.6 fantasy points on 33 touches in a dream matchup against the Packers. He’ll be chalky in Week 9, but it’s not all recency-bias – he’s also popping as our top overall value on DraftKings, mispriced by about $1,100 as per the DFS SuperModel.

Cook has hit 17.0 DKFP in every game thus far, averaging 28.7 per game, which leads all non-QBs. Minnesota is favored by 4.0-points (but that will rise if Matthew Stafford sits out), playing behind the 4th-highest implied point total of the slate (28.0). Detroit is now giving up the 2nd-most FPG to opposing RBs (31.6, 2.0 behind Green Bay), after getting gashed by Indianapolis (44.6) and Atlanta RBs (28.2) over their last two games.

“Underpriced backup RB now thrust into a starting role” has long been a DFS print-fest, and usually where we find the top overall value in any given week. But Edmonds isn’t exactly cheap, priced as the No. 6 (DK) and No. 13 (FD) highest-priced RB on the slate. Still, he’s glaringly a top value. Here’s what we had to say in Start/Sit:

Kenyan Drake was held out of practice on Wednesday, after being carted off the field in Arizona’s last game. HC Kliff Kingsbury has said Drake’s ankle injury isn’t as severe as first believed, but it’s looking highly unlikely he’s going to be available Sunday afternoon against the Dolphins. If he’s out, start Edmonds with confidence as a lock-and-load RB1. And, even if he suits up, I wouldn’t expect Drake to hamper Edmonds much at all. 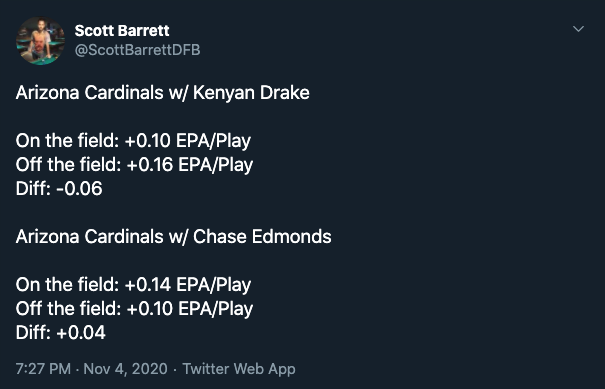 The fact of the matter is, Edmonds has fully earned the bell cow workload he’s about to get. Edmonds has played much better than Drake, has looked much better than Drake, and Arizona’s offense has been much better with Drake off the field. Drake and Edmonds are the only Arizona RBs to play a single offensive snap this year, so I’m not expecting much competition for touches from Eno Benjamin or Jonathan Ward. And this week’s matchup is great – Miami is a top run funnel defense, ranking 4th-worst in YPC allowed (4.96) but 4th-best in opposing passer rating (81.7). They’re giving up the 7th-most FPG to opposing RBs, and Edmonds ranks 29th in FPG (12.0) despite handling just 43% of the team’s backfield XFP thus far. Should we just double his FPG and use that as the expectation this week? Maybe.

Bonus Stat: In the Kliff Kingsbury-era, there are 13 instances of an Arizona RB handling 70-plus percent of the team’s snaps. Collectively, Arizona’s RBs average 24.0 FPG in those games. That includes Week 7 of last season when Edmonds scored 35.0 fantasy points on 95% of the team’s snaps.

Jackson has seen 15-plus carries and 5-plus targets in 2 of his last 3 games. The other game? Yeah, Week 7 wasn’t great (5 carries, 6 targets). So, Jackson seems to be pretty gamescript-sensitive – Week 7 was a blowout victory, and the other two big-volume games came in tight losses. Projected gamescript is a little shaky, but mostly in his favor this week, as 1.0-point underdogs.

Deshaun Watson is going to be mighty chalky this week, but Johnson is popping as one of our top overall values on DraftKings.

He hasn’t at all flashed a ceiling, but he has scored between 11.0 and 20.0 fantasy points in 6 of 7 games. His volume is also a good deal better than you realize. He ranks 5th in XFP per game since Week 4 (18.3), averaging 16.5 carries, 3.3 targets, and 2.3 opportunities inside the 5-yard-line per game. And this is no longer an RBBC – Johnson ranks 3rd among RBs in Snap% since Week 5 (80%), despite mixed gamescripts (2 blowout losses, 1 blowout victory) over this span. Gamescript should be good this week, favored by 7.0-points against a backup QB, and playing behind the 3rd-highest implied point total of the slate (28.5). Jacksonville is certainly bad against the pass, but they’re giving up 6.2 more FPG to RBs than QBs. And they rank 2nd-worst in schedule-adjusted FPG allowed to opposing RBs (+6.6).

Dobbins is just the 35th-highest-priced RB on FanDuel this week, and, well… that’s a mistake. After rushing 15 times for 113 yards against Pittsburgh in Week 8 – just the 2nd 100-yard game they’ve allowed in 2 seasons – Dobbins leads all RBs in YPC (6.68) and missed tackles forced per touch (0.33). He looks awesome. And Mark Ingram is likely to sit out again this week, which means similar usage to what he saw last week: 66% of the snaps, 16 of 32 RB carries, 22 of 27 RB routes, and 2 of 3 RB targets. Given the tough matchup this week, he’s just a low-end RB2 in our rankings, but still a clear DFS value in contrast to salary.

D.K. Metcalf is projected to draw shadow coverage from Tre’Davious White, who ranks 7th-best of 104 qualifying CBs in fantasy points allowed per snap in coverage over the past two seasons. And keep in mind, that’s despite routinely shadowing the best WRs in the NFL. In any case, this tough matchup for Metcalf should help funnel targets in Lockett’s direction. And Buffalo has struggled against slot WRs this year. They haven’t really faced many slot WRs of note, but the two they have (Jamison Crowder and Cooper Kupp) both scored between 24.5 and 26.0 fantasy points. They led their team in targets those weeks, as did slot WRs Isaiah Ford (Week 2), Hunter Renfrow (Week 4), Braxton Berrios (Week 7), and Jakobi Meyers (Week 8). In a week without much WR value, Lockett stands well ahead the rest of the pack on DraftKings.

Carr is our top QB value on both sites this week. Here’s what we had to say about him in this week’s Start/Sit:

For similar reasons to Allen, Carr is a very intriguing streaming option for those with a QB on bye. We should probably throw out last week’s game for Carr – Las Vegas and their opponent (Cleveland) had little success throwing the ball in a game with 25 mph sustained winds and gusts of up to 40 mph. This came after three-straight games hitting 20.0 or more fantasy points, despite tough matchups against the Bills, Chiefs, and Buccaneers. Coming into last week’s game, Carr ranked 14th among QBs in FPG (19.4), and that’s in spite of the league’s toughest QB schedule.

His schedule has been worth 3.6 FPG below expectation, which, if added back to his (pre-Cleveland) average, would push him up to 23.0 FPG (would rank 7th-best). Los Angeles is the softest matchup he’s faced thus far, and worth an additional +3.3 points above his expectation (4th-most), which would push his per game up average even further to 26.3 fantasy points. While that’s probably still way too optimistic, he should be started with confidence as a low-end QB1 this week.

Waller ranks 1st among TEs in XFP per game (15.1), and ranks 3rd in FPG (14.3). Excluding last week’s game (due to weather) and Week 3 against the Patriots (where he was hurt), Waller is averaging 10.2 targets per game and 17.9 FPG. Those numbers would rank 5th- and 11th-best among WRs. And yet, Waller is just the 3rd-highest-priced TE on FanDuel this week ($1,600 less than Kelce), or the 20th-highest-priced WR. Against a Chargers defense that is giving up the 5th-most schedule-adjusted FPG to opposing TEs (+3.0), he’s your top TE value of the week.

Make no mistake, this is an absolutely brutal matchup, as Wes Huber made abundantly clear here. And, for sure, Andrews is struggling this year, averaging just 39.3 YPG and 11.5 FPG. Still, it’s Mark Andrews, and he’s only $4,800 on DraftKings. And really, that’s just about the only analysis I need. He started off the season at $6,000, and he’s still the No. 3 TE of the week per expert consensus rankings. He’s not a must-play by any stretch, but he also shouldn’t be $4,800.

Fant isn’t the top value on either site, but he’s the No. 2 TE value on both sites:

Fant ranks 6th in FPG per game (11.9), 5th in XFP per game (11.9), and 5th in targets per game (7.2), earning between 6 and 10 targets in each of his last 4 games. He’s no longer on the injury report with an ankle injury which might have impacted his performance over the past few weeks, and he’s now back to his typical 75-80% route share. I’m expecting top-5 returns this week, in a dream matchup against the Falcons. Opposing TEs are out-scoring their per-game average by a league-high 9.4 FPG (over 2x as much as the next-closest defense) when facing Atlanta. Ian Thomas is the only TE who has flopped against them (because, of course), but Robert Tonyan (33.8), Jimmy Graham (24.0), Dalton Schultz (23.8), and Greg Olsen (16.9) all went off for monster games.