Hello and welcome to the Week 6 Sunday AM Update. What is this article? Mostly it’s a follow-up to yesterday’s big DFS piece – Scott Barrett’s Week 6 DFS Breakdown. But this article should also offer some utility for redraft and dynasty players.

Each week I’ll be breaking down the key injuries, news, and notes from Saturday / Sunday and will be updating this article up until kickoff (1PM EST). And I’ll also be providing a sort of TL;DR to yesterday’s big DFS article. Who are my core cash game plays? You can find that at the end of the article.

- BREAKING: Broncos RB Melvin Gordon is OUT. Scroll down to see what this means for Phillip Lindsay at a meager $4,300 salary on DraftKings.

- Jaguars WR D.J. Chark WILL PLAY. This is good news for the odds of DET/JAX to hit the over.

- Panthers WR Curtis Samuel is OUT. Bump up Robby Anderson and Mike Davis ever so slightly.

- BREAKING: Colts TE Mo Alie-Cox is OUT. Okay, maybe this isn’t breaking but this is something I missed in yesterday’s article. I had written up both Irv Smith and Trey Burton as salary-savers before just deleting everything I had written about Burton, because I preferred Smith by a margin. Alie-Cox leaves behind a 25% route share, which will likely now go to Burton, who was seeing 55% of the routes and averaging 5.5 targets per game. As evident by my lengthy Week 5 write up on Burton, it’s clear I’m bullish long-term. In a neutral matchup, he certainly offers a better floor than Smith, though I’m still unsure if I like Burton more for tournaments. He’s a very good play.

- Falcons WR Julio Jones WILL PLAY. Dr. Jene Bramel’s analysis on this on FootballGuys was excellent. Essentially, it’s extremely likely this low-grade hamstring strain is still not yet fully healed. "He's admitted he's not confident in his health multiple times this year. Aggravated hamstring strains take longer to heal and there's been no on-field indication his injury has improved. He managed only a limited Friday practice and did not speak with the media this week." He’ll play this week, but we should temper our expectations.

- 49ers QB Jimmy Garoppolo WILL PLAY and will start.

- Buccaneers RB Leonard Fournette is QUESTIONABLE. Per Adam Schefter, he’ll be active but will likely be limited, not getting his regular workload.

- Colts LB Darius Leonard is OUT.

- Broncos WR KJ Hamler is OUT, as is TE Noah Fant.

- Jets QB Sam Darnold is OUT, WR Denzel Mims is LIKELY TO PLAY, while WR Breshad Perriman is EXPECTED TO PLAY.

- Eagles WRs DeSean Jackson and Alshon Jeffery are OUT.

- Vikings RB Dalvin Cook is OUT.

- Steelers WR Diontae Johnson is OUT.

- According to our Ownership Projections, powered by FanShare, the highest-owned players are likely to be:

Before suffering an injury late in the 2nd Quarter of Week 1, Lindsay out-snapped Melvin Gordon 19 to 17, earning 7 of 13 carries and 6 of 9 routes (2 of 4 targets out of the backfield). With Lindsay out (turf toe), Gordon averaged 16.7 XFP per game (13th-most), representing 81% of the team’s total XFP out of the backfield. Royce Freeman averaged a measly 2.7 carries and 1.3 targets per game. Gordon stumbled in back-to-back bad matchups before smashing (28.3 DKFP) against the Jets in Week 4. So, what happens this week with Gordon out? Does Lindsay get the role they just gave Gordon, or something lesser?

To me – the Broncos made it clear through Lindsay’s first two seasons in the NFL, and then by signing Melvin Gordon (Adam Caplan reportedly basically exactly this), that they don’t view him as a true bell cow. But could he be a bell cow this week? Or will Royce Freeman siphon off about 45% of the backfield XFP like he did last year? I think it’s something close to the latter. He’s no doubt egregiously mispriced (DK: $4,300 / FD: $5,000), but it’s a bad matchup against a New England defense that ranks 7th-best in schedule-adjusted FPG allowed to opposing RBs. He’s a good play – a great salary-saver – but not quite a must-play. Royce Freeman isn’t really in play, even if you do think this will be a split backfield.

- We hit on Trey Burton at the top. Sorry for missing the Mo Alie-Cox news in yesterday’s article.

- QB Gardner Minshew deserves a bit more attention than I gave him, but maybe only if D.J. Chark plays. Minshew is averaging 22.7 FPG over his last 5 games Chark has played, hitting at least 19.8 FP in each game. He’s actually somewhat cash viable. As I illustrated yesterday, that game is ripe with shootout potential if Chark plays and Minshew can coax Detroit out of their shell.

I think that although the chalkiest players of the slate are undoubtedly all mispriced values, it’s not hard to argue against them for tournaments. And the arguments extend beyond just projected ownership. You should read yesterday’s article for the full explanation, but the short of it is:

- Derrick Henry doesn’t catch passes, which means will be more volatile and prone to getting scripted out of games than a true bell cow. Basically, either he rushes for over 100 yards and two-plus scores, or he underwhelms.

- Alexander Mattison’s matchup isn’t as good as it seems on paper. Atlanta ranks top-10 in rushing FPG and YPC allowed to opposing RBs, they’re more of a pass funnel defense.

- Everything lines up for David Montgomery this week, but when has he ever hit for us? He’s never reached 25.0 fantasy points in his 21-game career.

- A.J. Brown is likely to draw shadow coverage from Bradley Roby, who has been excellent this year.

- Kenny Golladay has some volume concerns, and Jacksonville has been stout against outside WRs.

- Davante Adams has a tough on paper matchup against Carlton Davis’ shadow coverage. He’s been excellent over the past two seasons when shadowing, but maybe it’s a little early to crown him as an elite eraser.

In most every case the leverage plays are obvious. And to gain even more leverage, I listed a number of low-owned contrarian plays I really liked.

The DFS SuperModel is fire.emoji this week. Check it out here.

I’m not saying this should be your cash lineup this week -- again, I do think there’s a lot of shaky chalk this week -- but this is probably going to be the most popular lineup in cash this week: 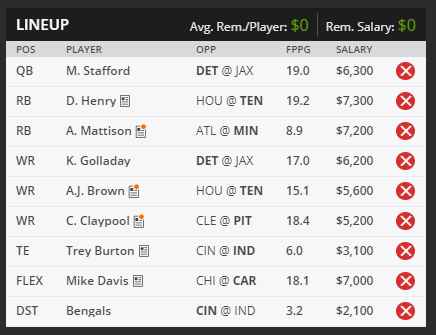 Keep this in mind when setting lineups. Personally, I think this is a better week for tournaments, and won’t be playing cash at all.