If you haven’t by now, go and read Injury Prone is a Lie for a much better big-picture understanding of injury analysis and durability concerns as a whole.

Preston Williams, Deebo Samuel, Dallas Goedert, Evan Engram — the list of young pass catchers who have suffered some sort of foot/ankle fracture goes on. What is this phenomenon and how does it fit into Terrace Marshall Jr. and his durability concerns? It’s complicated, but for fantasy purposes, the answer starts and ends with data and some physiology.

As a high school freshman, Marshall suffered a tibia (shin bone) fracture. Then as a high school senior, he suffered a left fibula (the other lower leg bone) fracture and dislocation from the tibia which required surgery. Finally in 2019, he suffered a right stress fracture which again required surgeries. Below is the description of his injuries courtesy of my friend fellow physical therapist Dr. Ethan Turner and his annual Injury Guide. 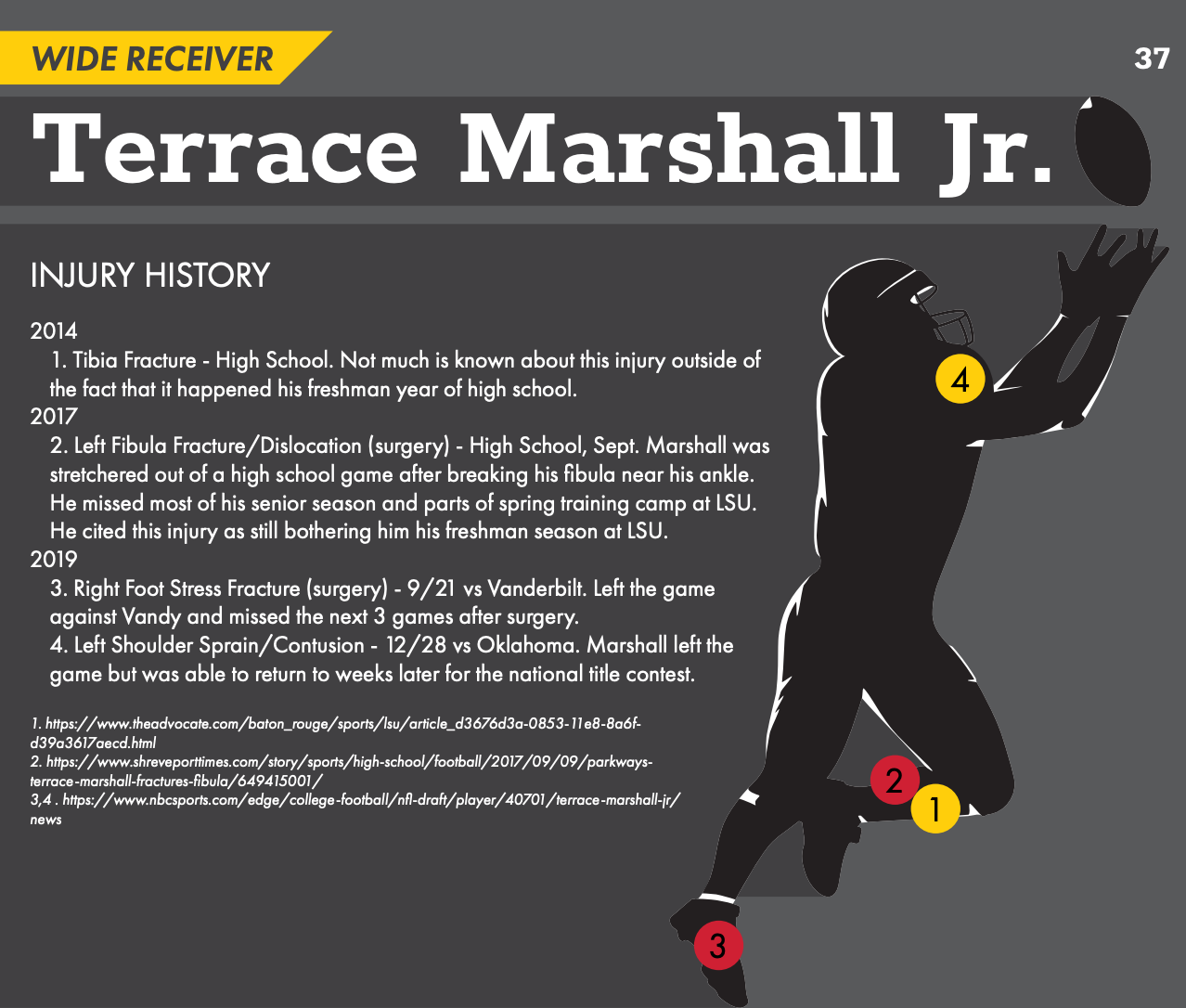 The first injury is relatively easy to dismiss. A kid (literally a child) suffered a fracture playing a contact sport. Even in 2017, the dislocation/fracture is not a common injury and doesn’t preclude any serious underlying issue. There are rumbles that he tore his ACL that same senior year, which likely means the fracture and ACL rupture happened simultaneously. These reports aren’t clear, but even so a high school ACL tear isn’t too terribly concerning. It’s even more important to make the point that children are not mini-adults when it comes to orthopaedics. Using childhood injury history to project adult durability is a fool’s errand and inaccurate at best. However, there should be some focus on the recurrent fractures.

Because the NCAA is so vague in their reports about injuries, it’s extremely difficult to pinpoint whether this was a metatarsal fracture or some other foot ailment. For now, we’ll operate under the assumption this was some form of a metatarsal fracture which has a median return to play time of 38 days and is operated on about 36% of the time (Marshall missed about 28 days and had surgery).

Yes, these can be much more serious — as was the case with Deebo in 2020 — but there are several types and varying degrees to metatarsal fractures. In fact, the more severe version of these can actually impact performance within the first two years of an NFL career, but we’ve established that’s unlikely to be the case here. The important takeaway from the linked tweet is that Jones fractures from college do not impact performance at the NFL level. So, even if this was a mild version of the worst kind of metatarsal fracture (Jones), this shouldn’t impact him moving forward. The final glass-half-full point to make is that ~72% of pass catchers have some form of foot/ankle fractures coming out of college - Marshall is no exception. But what about recurrence? That’s where it gets tricky.

This study identified a low re-fracture rate for Jones fractures, but it’s important to note that these commonly occur within the first two to three seasons of a player’s career. Seeing as Marshall has shown a propensity for fractures, it’s something that’s undoubtedly in play for his rookie year. The short answer as to why this happens to young players is probably linked to bone density or in other words, how developed and literally dense bones are. In males, peak bone density and mass doesn’t occur until mid to late twenties or even thirties.

As always, it’s prescient to point out this is not a prediction for future injury. Instead, it’s assimilating what is known about Marshall, historical data about foot fractures, and physiological underpinnings of human development.

Overall, because Marshall had several bone injuries at such a young age, it stands to reason that there should be at least some level of concern until he’s shown otherwise. Does that predict the future? Absolutely not, but a Lisfranc or Jones fracture in a player who meets all the risk factors of 1. Previous history of fractures 2. Young age/immature skeletal system (just 20 as of today), and 3. Plays the position most at risk, wide receiver, is cause for some concern.

To summarize, Marshall would fall in the bottom half of the Yellow Light Tier as of today and warrants a moderate amount of caution over the next season. However, the injury tide can turn quickly, and as of September of 2019, he has not missed a game due to a bone issue. Additionally, he’s missed just three games due to injury overall from 2018-2020 which is good news for his durability in the long term.