On Thursday, August 12, I sat down to draft — while livestreaming here on the site — against a bunch of followers in a “Beat John Hansen” NFFC Online Championship draft. It’s a 20-round, 12-team draft with no best ball involved, and I drafted out of the 7 hole. Third-round reversal also was involved.

These are usually tough drafts for me because, not only is the league $350 to enter, so it’s more hardcore than most, it’s mostly close followers of mine to join these leagues, and they know all my thoughts.

But overall, I thought the draft flowed well for me, and I like my team despite conditioning not being optimal with me also hosting the livestream while drafting. But no question, with the NFFC’s Greg Ambrosious in the room with me offering commentary, that helped a lot. 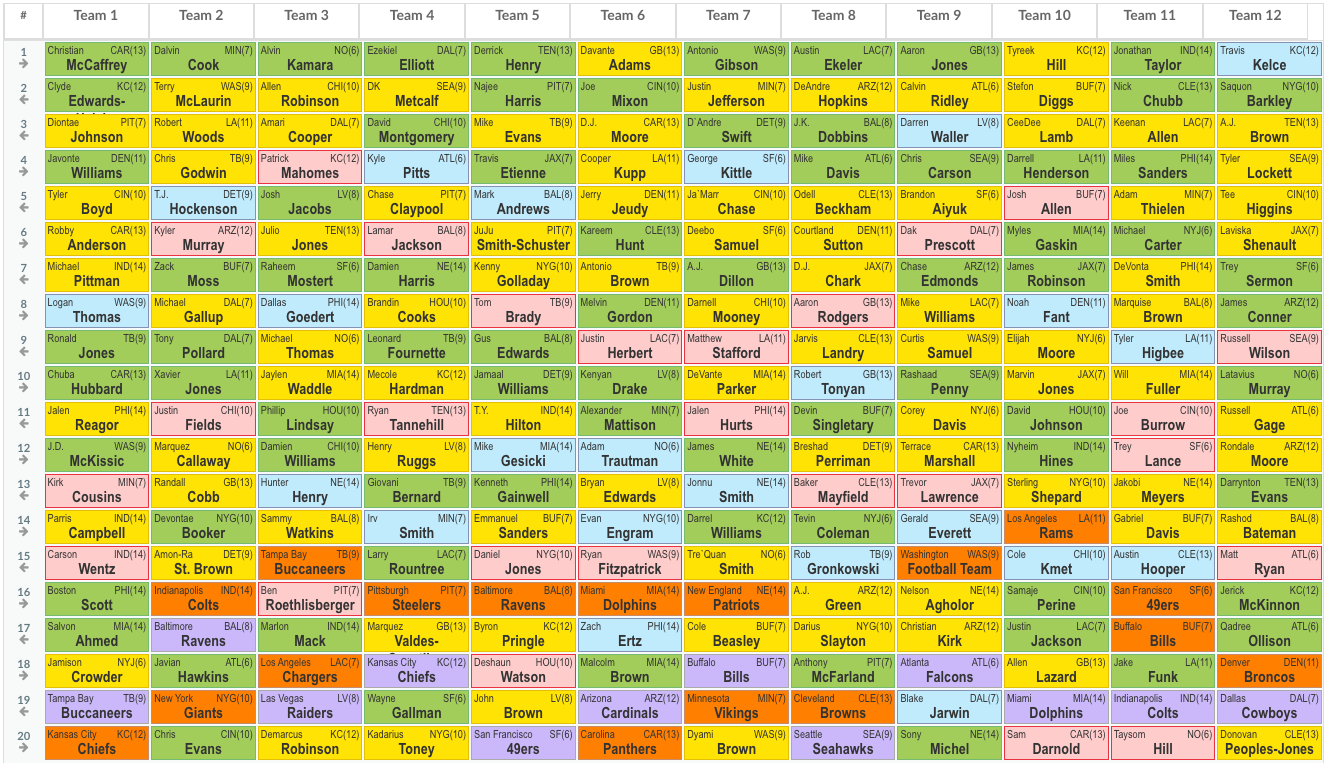 Pick 1.07: Antonio Gibson (RB, Was) — Lots of choices here, but I lean to RB. Aaron Jones is a safe pick, and I like him. But this league/contest is for a $200,000 grand prize, so I’m all about league-winners. Saquon Barkley is a safer bet than Gibson if healthy, obviously, but his health is a concern, and his role may be light early in the season. So I opted for Gibson. The only concern is his lack of third-down snaps, but he will chip away at JD McKissic’s role all year. Everyone on twitter hated the pick, which pretty much guarantees it will be a good one.

Pick 2.06: Justin Jefferson (WR, Min) — As I outlined in my Draft Plan, I’ve warmed up to taking a WR with one of my first two picks, due in large part to JK Dobbins and D’Andre Swift being available in the third now. The RB I seriously considered was Najee Harris, and now that the draft is over, you could argue that was the play. But I do have 100% confidence that Jefferson is not only the real deal, but that he will be even better this year and beyond. DK Metcalf was a consideration, but I think Jefferson is a better player.

Pick 3.06 : D’Andre Swift (RB, Det) — I definitely prefer JK Dobbins, but I missed him by ONE pick. I really did consider Javonte Williams, and I said that on the livestream, but I would have taken him over 20 spots over his ADP, which is a bit much. (Of course, after watching his debut, I wish I did take Williams. It just goes to show, you have to go get the players who you like in high stakes.) I’m not a big David Montgomery guy, so while I may regret it, I passed on his volume and better overall situation for Swift’s talent and superior OL. I don’t expect him to be a great pick, but I’ll settle on “solid” here in the third.

Pick 4.07: George Kittle (TE, SF) — Welp, the flow of this draft made the decision for me, and I had to take Kittle in the second half of the fourth round, since I’m leaning upside in this high-stakes draft. If Kittle was off the board (as he should have been), I’d have gone with Adam Thielen.

Pick 5.06: Ja’Marr Chase (WR, Cin) — I was planning/hoping for Brandon Aiyuk here, and after he went two picks in front of me, I seriously considered Jerry Jeudy, but I thought he might slip to the next round (he was drafted about 20 spots above his ADP), which just goes to show that you need to be very proactive in these high-stakes leagues. I do love Chase Claypool, but I opted for Chase, whose talent I still believe in more than Claypool’s (but it’s closer than I expected). Chase may need a half a season before he’s ready to ball after sitting out last year, so I may regret this pick. But he certainly fits the criteria of drafting upside and gurrific players.

I took a look at how this draft could have gone had I gone with Najee Harris in the second round, and it’s probably like so:

It’s all about Swift vs. Harris and Jefferson vs. Cooper, but I like my route by a very slight margin.

Pick 6.07: Deebo Samuel (WR, SF) — This was a little bit of an overpay by ADP, but not based on my projections, so knowing you have to go get your guys, I got one of my guys. I’m not worried that I also have Kittle because if they enjoy good health, they’ll soak up a very high percentage of what should be a great offense. I just wasn’t into the WRs on the board and who went off the board around this pick (Sutton, Shenault, Chark) other than DeVonta Smith, who I do still like but who’s missed valuable time. Deebo’s good-to-go in this offense. I’ve spoken to HC Kyle Shanahan about Deebo and my convo only improved my opinion of the receiver.

Note: I could have gone with Michael Carter with this pick and then maybe Kenny Golladay in the seventh round, but I actually prefer the route I went.

Pick 7.06: A.J. Dillon (RB, GB) — I’m kind of on my own with this guy, but I’m feeling it. Big time. I think a bad day for him in my flex this year will be around 9-10 points a game on average and a good game for him if Aaron Jones is out or limited will be good for 18-20 points a game. A great game could be worth 25+. I think Dillon at worst is a solid RB3, but if the upside I’m seeing is for real and it’s unleashed, I think he could go down as one of the best picks in the draft. Obviously, Jones’ history of two or more games missed in three of his four seasons, plus his usually light rushing workload are factoring into this opinion.

Pick 8.07: Darnell Mooney (WR, Chi) — He’s such a no-brainer contender for breakout WR of the year it’s not funny. His ADP will rise, and sadly we will be partly to blame quite frankly, but the markets are still conditioned to underrate him no matter what. Justin Fields’ debut could not have gone better when it comes to Mooney’s outlook.

Pick 9.06: Matthew Stafford (QB, LAR) — He’ll be fine, but after seeing Fields ball out in the opener, I regret taking Stafford here. I was feeling good and wanted to make sure I didn’t get pinched at QB, so I played it safe. Unfortunately, my QB2 could have been Fields had another viable QB1 not fallen.

Pick 10.07: DeVante Parker (WR, Mia) — I’ve been a Parker hater, but I never hated his talent. In fact, I kinda hated him because his upside was unrealized. But he’s done a lot better the last two years. I wasn’t buying last year at his raised ADP, but I am now at his depressed ADP. His talent really stood out compared to the next WRs to get drafted,

Pick 11.06: Jalen Hurts (QB, Phi) — This pick was made before I saw Hurts’ solid showing in the preseason opener. That helps, and I think we’ve already learned that he’s not a good practice player, which bodes well for his fantasy value because he did look improved on 8/12. Had Hurts gone off the board earlier as expected, I think there’s a better than 50/50 chance I go Fields with this pick, which sucks because Fields’ debut was amazing.

Pick 12.07: James White (RB, NE) — In this case, I may have snuck in a nice value with White and that’s based entirely on my opinion that Mac Jones will start 12-14 games this year. I could be wrong, but that’s what I’m going with, with confidence. Jones could be a game-changer for White and put him in the 60+ catch area. I took him over Nyheim Hines and Gio Bernard expecting Jones to start half their games, but I’ve upped that total.

Pick 13.06: Jonnu Smith (TE, NE) — We’ve been higher on Jonnu than his ADP all along, but after talking to a dialed in Patriot guy who’s opinion I respect, I’m all-in on Jonnu as a great selection around his ADP of 145. That’s right around where I got him, and I’d take him 10-15 picks before this if need be. Other than Irv Smith, nothing is standing out talent wise at any position around this pick.

Pick 14.07: Darrell Williams (RB, KC) — I am light at RB, so I tried out this sneaky veteran with mostly skanktastic RB picks going off the board around this time. I have absolutely no regrets, especially since Tevin Coleman went a pick after me.

Pick 15.06: Tre’Quan Smith (WR, NO) — Looking for upside, and I thought he stood out, even though he lasted this long for a reason. But things could certainly turn in his favor quickly, and a massive role is there for the taking as long as Michael Thomas is out. The other upside WR I considered here was Amon-Ra St. Brown, who went a couple of picks later.

Pick 16.07: New England Defense (DST, NE) — I missed out on my top DT target in the Miami Dolphins by one pick, which sucked. Deflated, I settled on the Patriots, but I do like them this year for sure.

Pick 17.06: Cole Beasley (WR, Buf) — Thanks, anti-vaxxer discount! I do think players who have confirmed they haven’t taken the vaccine should be downgraded at least a little, since their chances of having their season disrupted are greatly increased. But we’re at 200 picks into this draft, so this is an absurd value for a guy who caught 82 balls last year.

Pick 18.07: Tyler Bass/Buffalo Kicker (PK, Buf) — I retired from kicker analysis (sorry, something had to go), but he’s our special teams maven Tom Simons’ top kicker, so I took him!

Pick 19.06: Minnesota Defense (DST, Min) — I was admittedly distracted at this point and getting ready to wrap up the livestream, and I probably should have taken Kadarius Toney or KJ Hamler. On the other hand, I don’t have time to stream defenses, or at least do it well, so I took the second defense. The Vikings defense will be good this year.

Pick 20.07: Dyami Brown (WR, WFT) — Total dart throw to get this draft over, and probably as good of one that was on the board at the time.

If you notice, all the skill players above are listed in my Draft Plan article as players I’m targeting and they are in my top-75 list of my favorite picks this year. That is, except George Kittle. As outlined above, I felt Kittle was too good of a value to pass up in the second half of the fourth round.

Based on my past track record, I’ll probably blow it with this team by missing some WW deadlines because I always place a low priority on my own teams, but coming out of this competitive draft where everyone knows who my guys are, I thought this was a good draft. I am a little light at RB, but I also have great depth at QB, WR, and TE.

Fantasy Sports Writers Association Hall of Famer John Hansen has been an industry leader and pioneer since 1995, when he launched Fantasy Guru. His content has been found over the years on ESPN.com, NFL.com, SiriusXM, DirecTV, Yahoo!, among others outlets. In 2015 he sold Fantasy Guru and in 2020 founded FantasyPoints.com.