With our friends over at Bestball10s.com rolling out their 2021 drafts earlier this month, it’s time for us to take a first look at the 2021 Best Ball landscape, and to do that we had several members of the staff, yours truly included, to gather and do a draft while livestreaming it on the site this past Thursday night. Those of us on the staff for this draft offered up plenty of real-time analysis of the draft, and if you’re interested, you can watch the livestream on-demand here.

Before I get into breaking down each round, here’s quick look at some trends from this 12-team PPR, 20-round draft with 240 picks made:

It’s a small sample size, but we are talking FantasyPoints full-time staffers along with some most hardcore and savyy best ball players out there, so I think it’s fair to say this draft is a good representation of what you’ll see out there on the interwebs in terms of competitive drafts.

That said, based on these results, at least for a 12-team 20-round Bestball10, your best practices should be as follows:

Take a look at the Draft Board: 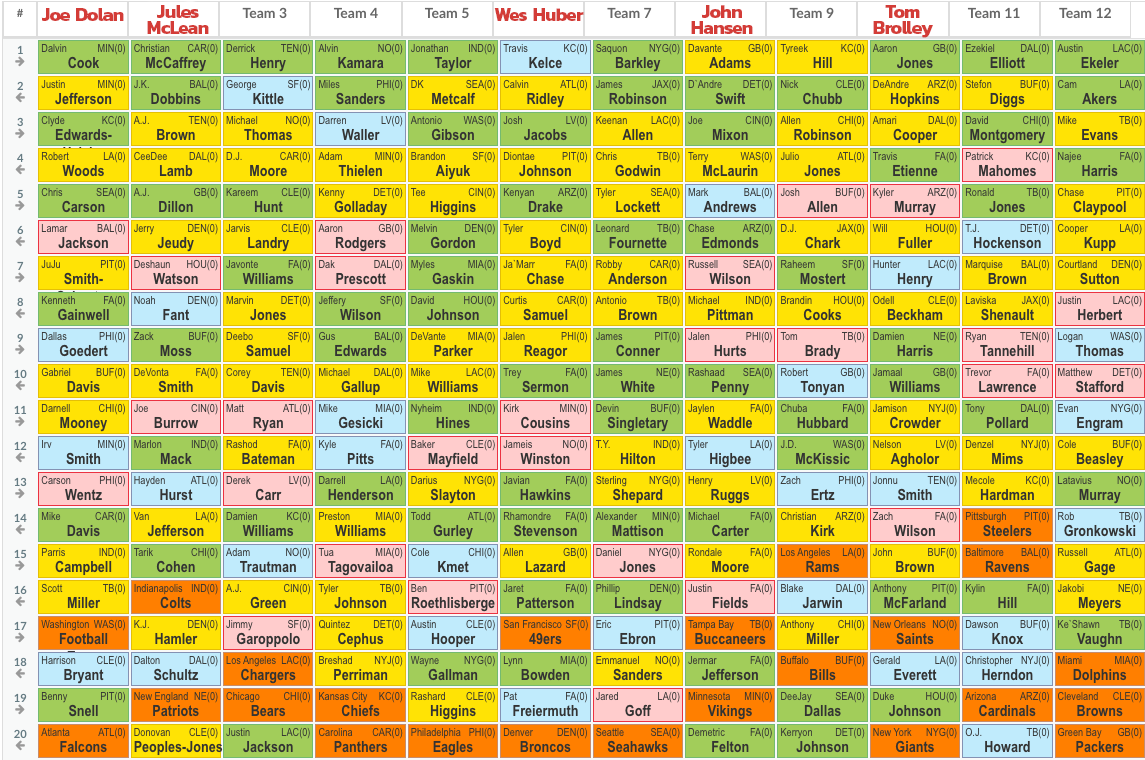 Round 1: No real surprises in the first round, but I would have taken Alvin Kamara or Jonathan Taylor over Derrick Henry, due to Henry’s lack of work in the passing game and new OC. Saquon Barkley falling to 7 is very fair given his last two seasons. I think he’ll be taken in the 6-7 spot all year. Picking at 8, I felt I had to go WR given the available players, and I knew I’d get a good RB option in the second.

Round 2: I felt pretty good about D’Andre Swift, who has just scratched the surface of his potential and should be locked into a huge role. But I paid a premium at 17 overall, since his ADP is likely low-20s. But I had to take a back after taking Davante Adams, and I love Swift. As good as he was last year, I’m not willing to take James Robinson in the top-20, or even in the first two rounds. I could be wrong here, but I do think they will bring in some serious competition for snaps and touches, and it’s a new coaching staff and offense. George Kittle in the second round in BB is okay, given his blowout potential, but I’m still scarred from the 2020 season, and I preferred Mark Andrews 34 picks later.

Round 3 : I was hoping Antonio Gibson would fall to me because I think he’s really appealing in the third round right now, but that was not to be. Josh Jacobs was a decent value, but I’m a little down on him after 2020, so I probably would have taken Joe Mixon over him if Jacobs was available. Mixon has driven me nuts because he’s so talented, but taking him late in the third should soften the blow if he continues to frustrate. This is a huge season for him, and assuming they add more help to their OL and his QB is okay, if Mixon is ever going to have a big season, it has to be 2021. Also, David Montgomery scares me a little right now in the third round, and his early ADP is within that round at 32. The OL isn’t good, and the status of their passing game is way up in the air.

Round 4: With two RBs in the fold already, I didn’t see another back worth taking, so I went BPA with a lean toward WR, and there were plenty of good options. I opted for Terry McLaurin, who does need a better QB and WR opposite him. I think he will get both in 2021. Diontae Johnson was tough to pass on, though, and I probably should have grabbed him. As much as I loved what he did last year, I thought Brandon Aiyuk at 44 overall was a little too rich for my blood.

Round 5: With two WRs in the fold already, I was hoping for a RB who I felt was worth taking in this round, and I was going to take AJ Dillon but was sniped from me. I almost had to go BPA at that point, since no WR stood out to me, so I opted for Mark Andrews, which I thought was solid.

Good values: None of note.

Round 6: I always lean toward upside, so Chase Edmunds was a pretty easy call for me, since I needed an RB3. If Kenyan Drake departs, Edmunds should be locked into 200+ touches, but he’s not going to be a high-volume guy.

Round 7: Honestly, I was hosting the livestream so a little distracted, and I was auto-picked Russell Wilson. However, I did have him in my queue, so I can’t complain too much. I lost some value, but Wilson is obviously fine. I was going to take a WR and that was the ideal play. I could have had Marquise Brown as my WR3, which would have been nice.

Round 8: The talent at WR was starting to fall off, and I still didn’t have my WR3, so I scooped up my guy Michael Pittman, who is already set to work out with Carson Wentz throughout the offseason. Ideally, though, I would have gone WR in Round 7 and then grabbed an intriguing rookie RB in Kenneth Gainwell, whom our Greg Cosell really liked in 2019 (he didn’t play in 2020). Odell Beckham just makes me sad at this point, but he was worth it this late, given his potential to have big games.

Round 9: Once again, a QB auto-pick, which was my bad again but not really my bad but my computer’s bad, since I had a freeze up. I took Jalen Hurts two rounds before I planned on, but he was in my queue, so I’m not that upset. But now I definitely need a third QB just in case the Eagles go QB in Round 1 of the NFL Draft. But if Hurts is the guy this will end up being a solid pick, if not a great one.

Round 10: We’ve run out of sure-things in this round, so it’s time to be smart about your picks and focus on upside generally. I may have overpaid for Rashad Penny, but then again I may have Seattle's lead back and a 3-down back in a contract year 100+ picks into the draft. We also saw in this round what we can expect with Trevor Lawrence, and the answer is the 14th QB off the board and drafted around Matthew Stafford. That seems about right. Free agent Jamaal Williams could be a nice value if a team like Pittsburgh opts to sign him as a cheap lead back.

Round 11: I actually liked the talent off the board in this round more than the previous round. With Pittman as my WR3, I had to get more potential at WR, and Jaylen Waddle will be a #1 pick for sure.

Round 12: I felt pretty good about my QB/RB/WR situation, so I opted for a guy who let me down last year but could be a stud in Tyler Higbee, who gets an upgrade at QB with Matthew Stafford. I do not think Gerald Everett will be back, of course.

Round 13: Our guy Wes Huber took rookie RB Javian Hawkins in this round, so I will defer to him on that one since I haven’t gotten to Hawkins yet this off-season. But I just saw that PFF has him as their #2 RB in the draft, which is quite an endorsement. Otherwise, this round was kind of lame. I went with Henry Ruggs as my WR5, which was decent, but I can’t say I’m expecting a breakthrough after last year’s disappointing showing. They did love what Ruggs did in camp last summer, at least.

Good values: None of note.

Round 14: Our first defense went off the board in this one (Pittsburgh), which is about right. We did also see two other D/STs drafted in the next round. I opted for one of the better RB prospects in this year’s NFL draft for my RB5 spot in Michael Carter. Carter will likely be a role player (think Gio Bernard), but he’s talented, and he could be Clyde Edwards-Helaire if things go really well.

Round 15: I can’t say I’m all over the best available players at this point, and with no one truly standing out, I went for the upside with rookie Rondale Moore. Moore may need to be a gadget player early on, but if he lands in the right spot he could have some big games, since he moves well and can also break tackles and is hard to bring down. I probably would have been better off grabbing a top defense, though.

Round 16: Still looking for a viable QB3, I opted for upside with Justin Fields. I did the same thing in a draft last year, using a throwaway pick on a rookie QB, and Justin Herbert — who has a lot of similarities to Fields — was great for me.

Round 17: I grabbed the Tampa Bay defense as the sixth defense taken, which is a decent compromise between paying up and going cheap for my D/ST1.

Round 18: At this point, the unknown (like my pick in this round of rookie RB Jermar Jefferson) is a lot sexier than the known (like Wayne Gallman, who was drafted in this round), but my 20th round pick at RB was probably a better pick, so maybe I should have added another TE here like my guy Harrison Bryant.

Round 19: I felt okay getting the Vikings as my D/ST2 in this late round. They will be healthier next year, and “Mr. Every-Other-Year” Mike Zimmer’s team will likely bounce back and challenge for double-digit wins. They may go pass rusher in the first, as well.

Good values: None of note

Round 20: I really liked my selection of rookie RB/WR Demetric Felton, who looks like a hybrid gadget player in the NFL. I don’t think we’re looking at Antonio Gibson’s kind of upside, but like Gibson, Felton can play either position, and he was great at the Senior Bowl, showing good route-running ability and he scored a TD in the slot. Felton is a RB in this league.

I like my team and the upside of most of my players, but I can do a better job than this. I overpaid for my first two QBs because of the autopicks. The main mistake I made was probably going a little too heavy on upside with some rookies, especially Rondale Moore and Jermar Jefferson, but that’s usually the ideal course of action.

Fantasy Sports Writers Association Hall of Famer John Hansen has been an industry leader and pioneer since 1995, when he launched Fantasy Guru. His content has been found over the years on ESPN.com, NFL.com, SiriusXM, DirecTV, Yahoo!, among others outlets. In 2015 he sold Fantasy Guru and in 2020 founded FantasyPoints.com.