A former four-star recruit out of Archbishop Rummel in Metairie, Louisiana, Ja’Marr Chase entered his 2018 season at LSU with modest expectations. His high school team ranked outside of the top 1,000 schools nationally, 25th in Louisiana while finishing with a 6-5 record his senior season. Chase posted over 1,000 receiving yards during his final two seasons with the Raiders, adding 14 total TDs in 2017. Judging from the level of competition shown in his Hudl highlight reels, it’s no surprise scouts had a difficult time pinpointing his future upside — ranked outside the top-40 WRs by ESPN’s recruiting ranks.

Even facing those vanilla coverages, Chase displayed the same sharp route-running prowess, flawlessly moving in and out of his breaks, and an innate ability to separate late that has defined his brief time in college. But, prior to matriculating to the Tigers in Baton Rouge, Chase participated in the Nike Football Rating at the Opening. He impressed with a 4.09 second finish in the short shuttle, but did the opposite timing at 4.66 seconds in the 40. However, after busting his tail at LSU, Chase has, according to Bruce Feldman of The Athletic, shaved that time by nearly three-tenths of a second.

The improvements Chase made from a true freshman 2018 season to the season that would earn him the 2019 Biletnikoff Award were extraordinary. A good deal of assistance came from LSU adding Joe Brady as its passing game coordinator prior to the ‘19 season. Brady increased the usage of 11 personnel by 29%, and eliminated the 20% usage from LSU’s 2018 season of 21 personnel (2 RBs, 1 TE) entirely. He also reduced Chase’s run blocking responsibility by 31%.

The most promising factor from a fantasy perspective from Chase was catching 24 passes of 20-plus yards for 14-of-20 TDs his true sophomore season. A massive 40% of those 20 TDs were collected on go routes, despite those accounting for only 10% of total routes his sophomore season. His ‘19 film perfectly illustrates the reports of increased speed. For example, Chase might get a slight shove on A.J. Terrell here, but he has zero issues accelerating past Terrell’s jam attempt, and matching his official 4.42 speed in Cover 2 Man for 52 yards that set the SEC single-season record for receiving TDs. 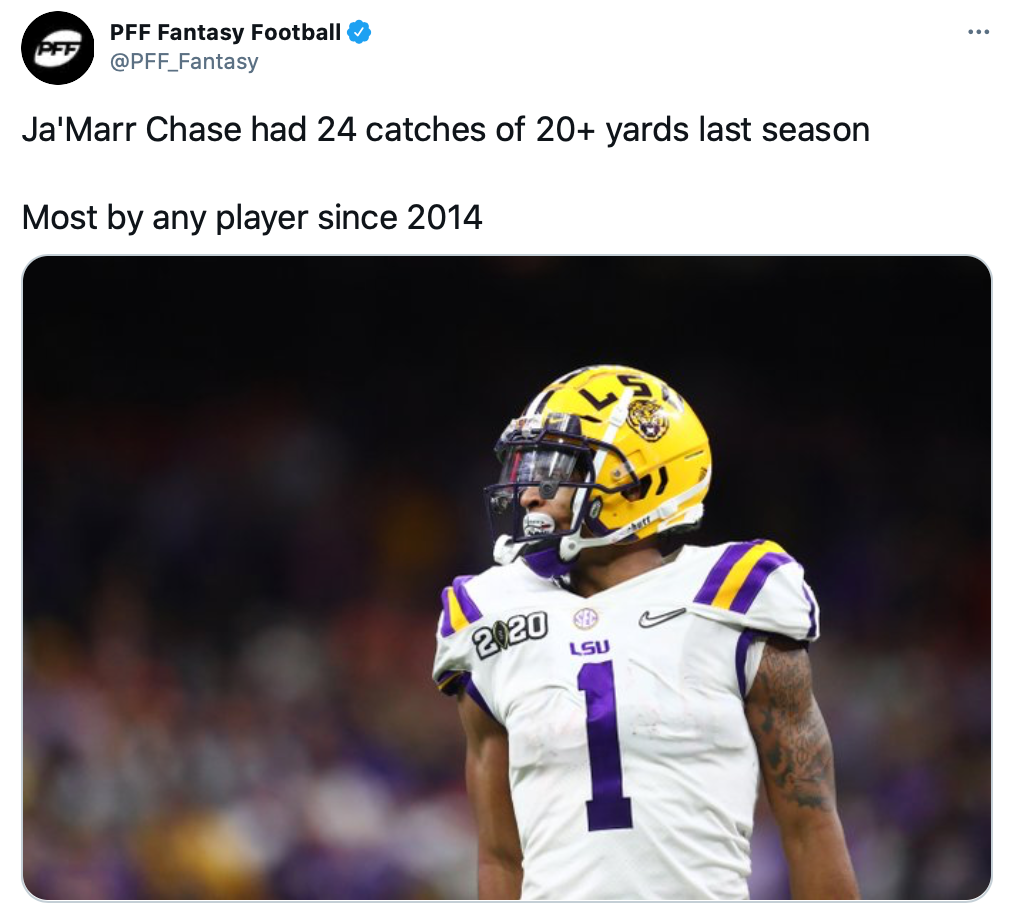 Another of Chase’s strong attributes that will serve him well at the next level is his explosion. Ja’Marr won a 5A state title in the long jump as a HS junior. An example can be found high-pointing the ball here to connect with Joe Burrow facing the all-out blitz so typical of Cover 0. In combination with his ability to burn man coverage, Chase’s zone shell recognition will allow him to succeed on Day 1 in the NFL. It may seem as though this instant separation from CJ Henderson (4.39 speed, 1st-round pick in 2020) in Cover 4 is simply from a busted coverage. Not so fast! On the common switch route with Clyde Edwards-Helaire, Chase accelerates so quickly off the line that Henderson and safety Brad Stewart Jr. are relegated to spectating his 54-yard scamper to the house.

As for Chase’s fit at the next level… he played almost exclusively on the weak side as LSUs split end (X receiver), remaining planted on the line of scrimmage. Chase did play two-thirds more snaps from the slot under Brady than during his first season, but he will profile on the outside in The League. Chase reminds me of a young Amari Cooper. He is clearly a foundation receiver with the potential to quickly ascend into the NFLs elite tier of top-10 WRs.

We’d spend our time more wisely attempting to find a team that couldn’t maximize his talents than those that could. If we’re being picky, landing with the Dolphins at 1.03 during Eric Studesville and George Godsey’s first season as co-OCs or the Eagles at 1.06 — also during Shane Steichen’s inaugural season as OC -- would allow Chase to immediately step into an every down role as the go-to option. When deciding on the No. 1 overall pick in 2021 rookie drafts, do not miss out on the opportunity to snag this guaranteed stud wideout with the potential to offer WR1 upside for well over a decade.

Don’t confuse any brevity in breakdown as a negative toward Chase. We’re not discussing a gimmick-laiden WR with the speed to break combine records. We’re not attempting to force an overly athletic profile combined with underachieving college results into an NFL mold. We’re discussing a WR that possesses not only the athleticism to succeed, but with the size to carry the ball out of the backfield, record-breaking results, and every bit of it collected against NFL-level competition.

I feel so confident in Chase’s chances of quickly joining the elite NFL WR tier that I will include him within the top-25th percentile of the 38 WRs selected in the first round over the last 10 seasons. The only factor that could threaten Chase’s ranking as my No. 1 overall rookie draft selection, sans Superflex formats, would be if Najee Harris were to land in an insanely perfect situation. Even then, the length of Chase’s expected career would make passing him up extremely difficult. From a pre-draft standpoint, Chase is hands-down the top player on the Dyno board.