Rookie receivers, in general, have expectations they must satisfy during their opening season in order to see significant time on offense. Over the last three NFL seasons, rookie tight ends have averaged to run five particular patterns that account for nearly 80% of total routes. Those five routes include Crossers, Outs, Flat work, Hitches, and Gos. Crossing routes — on which receivers will intentionally cross midfield — easily stand as the most frequent, important route at the position. On average, rookie TEs will run a Crosser on nearly a fourth of all routes. To put that into perspective, rookie TEs will be asked to run Posts, Corners, Ins, and Slants on less than 20% of total routes, combined. Whenever I make references to “NFL routes” in these Dyno rookie profiles, those are the guidelines I am following.

The 2017 recruiting class of TEs could end up regarded as a solid group. The headliner of the collection had been Colby Parkinson, followed by Cole Kmet, Jake Ferguson, Hunter Bryant, Tre’ McKitty, Noah Gray, Peyton Hendershot, and Cade Otton. Then all of the way down the scout rankings -- the ones where he was actually included -- you will find the name Hunter Long. The youngster out of Exeter, New Hampshire attended local Exeter High School, playing in a Blue Hawks’ offense that utilized a massively run-heavy, 32-personnel attack (that’s 3 RBs, 2 TE). He averaged 18.2 yards/reception during his junior season … but posted just a 6/109/2 receiving line.

The offseason prior to Long’s senior year did not go well. It began with attendance at summer showcase camps held at universities, such as Penn State and Syracuse. Seeing himself side-by-side with future FBS prospects forced him into realization mode. He simply did not have the thickness at 6-foot-4, 205 pounds to play TE in the FBS. That frightening recognition grew legs when he wasn’t extended a single scholarship offer. Not long after, he ruptured his spleen in a skiing accident that forced him into zero activity for six full weeks. That earlier realization and subsequent injury lit a fire under Long that ended up changing the course of his life. 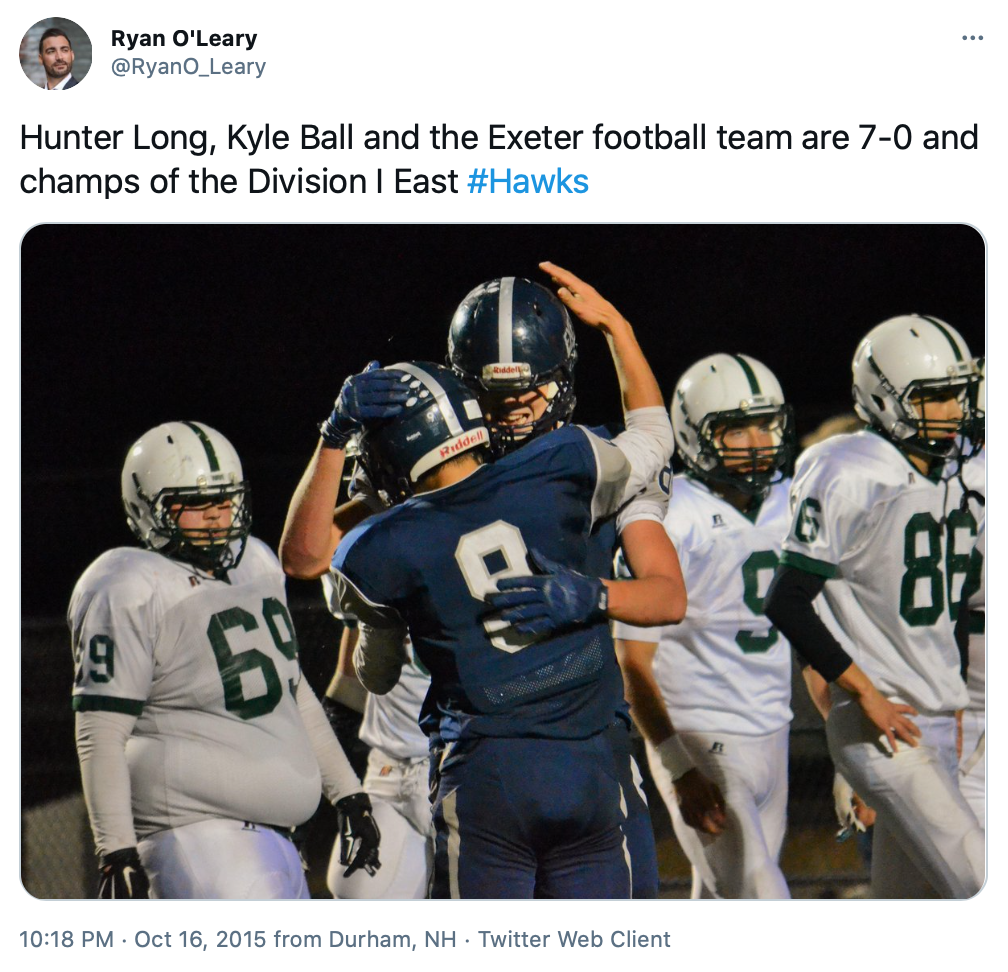 By the end of his senior season at Exeter, he got his weight up to 235 pounds. Next thing he knew, he had seven offers delivered from UConn, UMass, New Hampshire, Holy Cross, Rhode Island, Fordham, and… Boston College. Excited for a chance to compete in the Power 5, Long decided to take his talents to Chestnut Hill, Massachusetts. However, he would devote a post-graduate year to continue to add strength at Deerfield Academy. Funnily enough, Long would end up posting exactly 30 receptions for 508 yards both during his senior season at Exeter, and post-grad season at Deerfield. He added nine TDs (two earned on defense) at Exeter, along with two TDs and seven sacks at Deerfield.

ESPN regarded Long as an unrated, two-star prospect during that 2017 recruiting cycle. Rivals would mirror that evaluation. 247Sports ranked him as their TE80, but actually put three next to his name. During his age-18 season, Long still required a bit more time acclimating his body to the requirements of the college game. Redshirting his true freshman season was a no-brainer. And the 2018 season was spent cleaning up the scraps behind each of Tommy Sweeney, Korab Idrizi, Chris Garrison, and Jake Burt in the TE rotation. At the time, all four were considered superior prospects, formerly earning universal three-star prospect ratings coming out of high school. 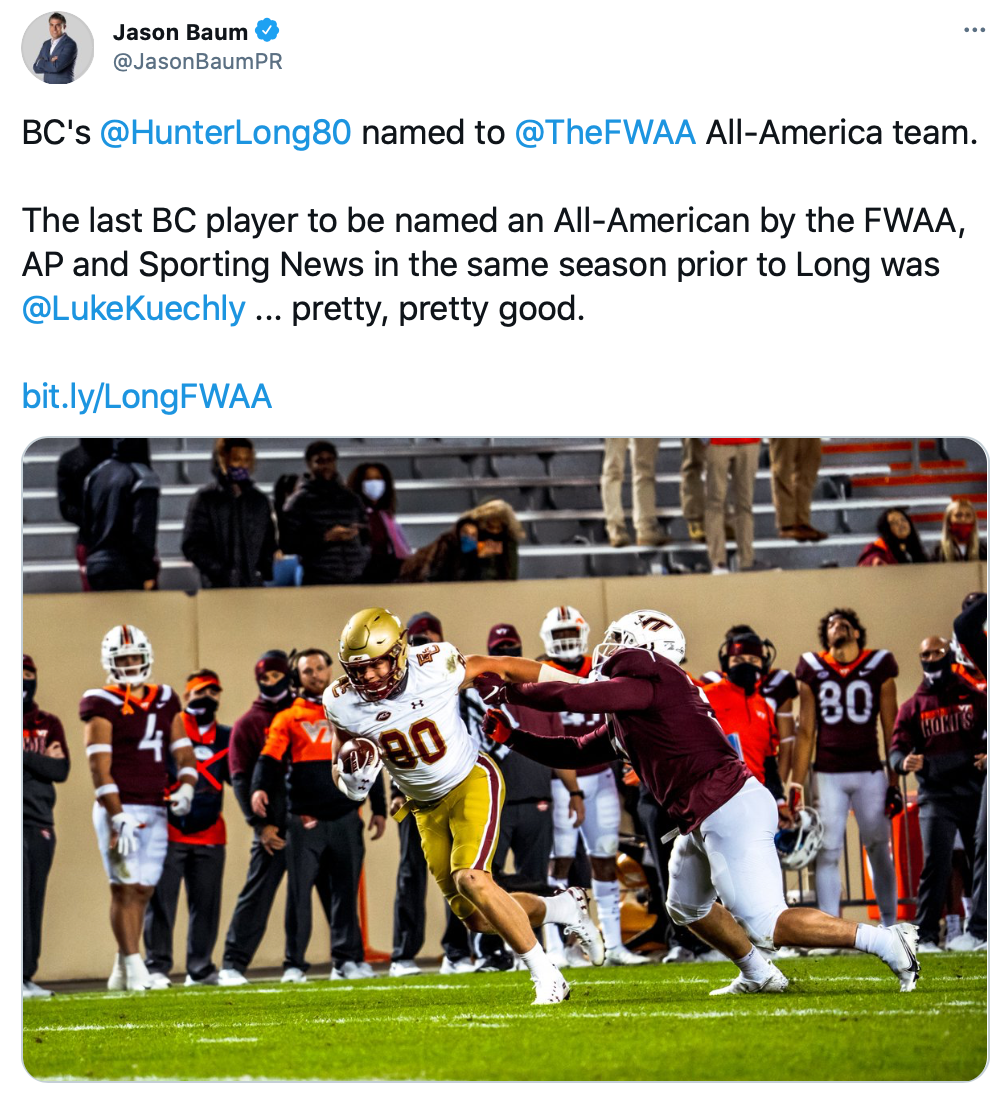 One trait Long instantly held over each of his TE predecessors was outstanding speed. Long recorded verified timings in the 40-yard dash at 4.58 seconds and short shuttle at 4.28 at 6-foot-4, 235 pounds! And that quickness translated onto the field during his first 32 routes as a redshirt freshman. Long averaged 25.8 yards on his four receptions that season. Taking note of this for later reference, Long generated half of his receptions and yardage on only four Crossing routes. And his run blocking scrappiness from high school was carried over in OC Scot Loeffler’s run-heavy attack featuring 12, 22, and 13 personnel groupings.

Since referencing four receptions isn’t going to convince anyone of anything, we’ll jump ahead to Long’s redshirt sophomore season from 2019. But we’ll need to get a little creative to make it happen. No highlight reels exist, so the following condensed games from the ACC Digital Network must be used (apologies in advance for the constant ads):

vs. Virginia Tech | at Louisville | vs. NC State

The big change for the ‘19 season was the hiring of Mike Bajakian as the new OC, and the eventual firing of HC Steve Addazio. Our first look at the modern version of Long (7:49 vs. Virginia Tech) finds him running no other than a Crossing route facing Man coverage. You can instantly notice that he simply does not move like many players his size. Long averaged 5.70 yards/route run (YPRR) on Crossers during his first season in maroon and gold. The Eagles featured monster RB AJ Dillon for obvious reasons in ‘19. And the play under center was simply dismal. However, Anthony Brown established a solid connection with Long, targeting him on the very next play (8:04) on — wouldn’t you know it — another Crossing route in the tight Man coverage of Khalil Ladler. Brown hit Long on a third straight play running an Out, but it is missing from the footage.

Skipping to his Week 6 game at Louisville, we get our first look at an Out at 7:40 opposed by a Cover 2. The very next play finds Long loose down the seam toward paydirt from a Cover 3 bust. We have another Out at 12:35 with Cornelius Sturghill’s Man coverage breathing down his neck. Moving ahead to Week 8 vs. NC State, speeding his way 52 yards down the field on a designed screen (2:24). At the 13:47 mark, Long shows his willingness for sitting underneath the Cover 6 zone on a short Hitch. At 14:30, we see another designed screen with Long using his size-to-speed combo to maximum effect. It’s definitely not a thorough collection of examples, but enough to showcase Long’s plus traits in action.

Now let’s jump to an actual highlight compilation. For his final season with the Eagles, we have our pick from a variety of reels. But his official footage is the easy choice. But, before we look at the footage, let’s examine the entirely new BC coaching staff. Former NFL secondary coach and Ohio State co-DC, Jeff Hafley, would be tasked with revamping the culture at Boston College. He would begin by bringing on veteran NFL QB coach, Frank Cignetti Jr. to implement a 21st-century offense relying on heavy usage of 11 personnel. What resulted was BC now passing on two-thirds of plays rather than running at the same percentage during previous seasons. Hafley would also hire Steve Shimko as his TE whisperer. Finally, former four-star, Notre Dame QB Phil Jurkovec was lured into town to lead the attack. 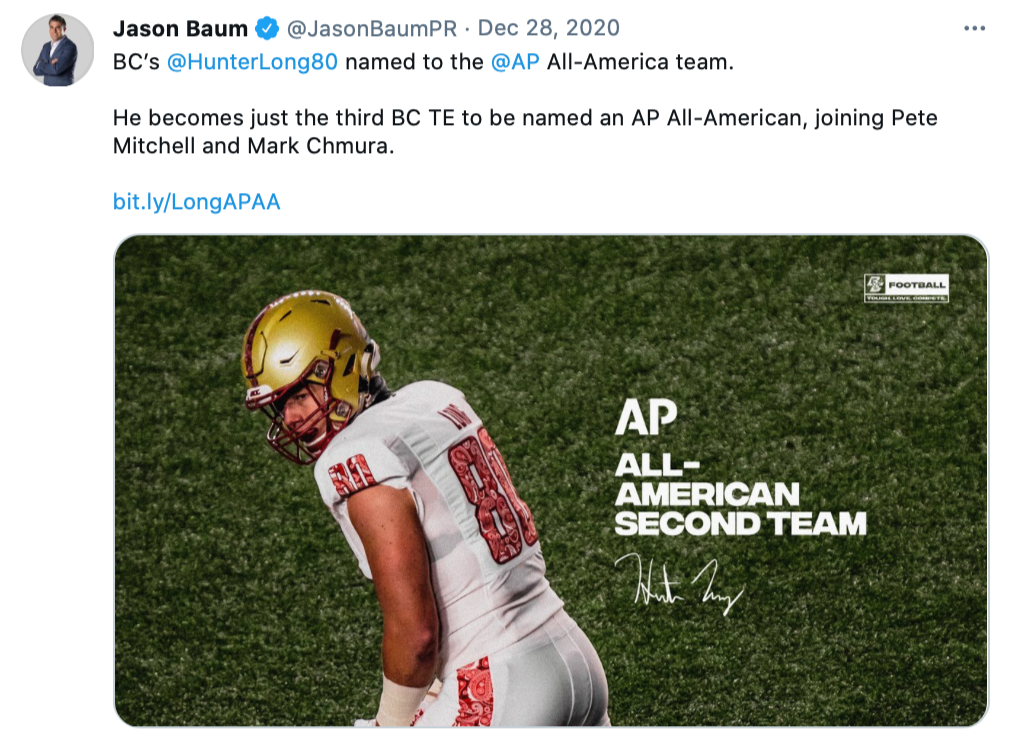 While I feel Long is destined to see most of his early time in the NFL from an attached alignment, he still improved his slot YPRR by 21% over his previous season. We can see the results for ourselves on a Speed Out at 0:19 (Man), 5:25 on a Seam (Cover 4), 6:28 down the seam (Cover 2-Man), and 6:37 on a sexy Corner (Cover 2). The drum I’ve been beating throughout the profile is Long’s sheer dominance on Crossers. He did nothing during his closing college season to alter that perception. You are presented with additional examples inline on the opening play (Man), at 0:28 on a very late throw where Long one-hands the ball (Man), 1:18 (Man), and 7:57 (Cover 4). 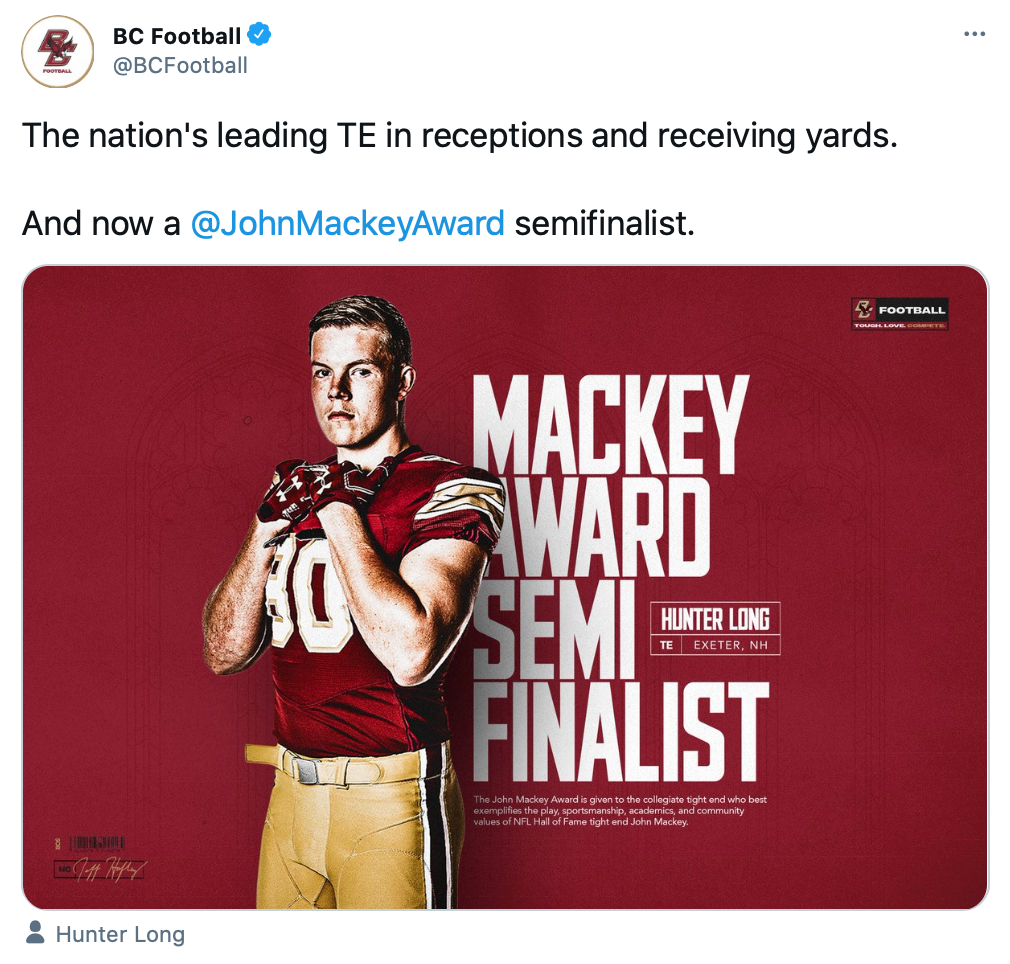 If you want to pinpoint a single area of his game separate from route classification where Long showcased his excellence, check out what he did with the benefit of Play Action. On less than a third of total routes, Long generated very nearly half of his yardage, and two-thirds of TDs. You can see for yourself on a multitude of Speed Outs from inline at 2:25, 2:39, 5:34, and 7:16. Then we see him on a “Throwback” at 3:59 and designed screen at 4:58. After doing nothing his first two seasons in goal-to-go situations, Long collected a trio of TDs in 2020. All three can be found facing Man coverage at 0:53, 3:04, and 5:48.

We truly have zero need to look for a team fitting Long’s profile. His game would be perfectly suited to mesh with NFL offenses from every decade in the game’s history. He simply eats at his leisure from an attached alignment. That fact alone will immediately get him on the field at the next level.

Since Long has shown his willingness to get in the face of DEs and LBs to block for the run, his prowess with Play Action guarantees he’ll see that portion of his future team’s offensive snaps, as well. As odd as it may read, Long’s size-to-speed-to-agility collection, combined with his Play Action prowess reminds me so much of O.J. Howard.

It’s a guarantee that Long will not be drafted in the first round like Howard. But do not sleep on this gifted athlete. If Long is able to translate the same speed he recorded coming out of high school during his Pro Day on March 26th, now measuring at 6-foot-5, 254 pounds… he could possess superior speed to Kyle Pitts! A second-round selection could very possibly be in the cards. He already earned praise at the Senior Bowl from the media for his hands and explosion off the line. And he was also named the top TE on the National team by the opposing LBs and DBs on the American team. 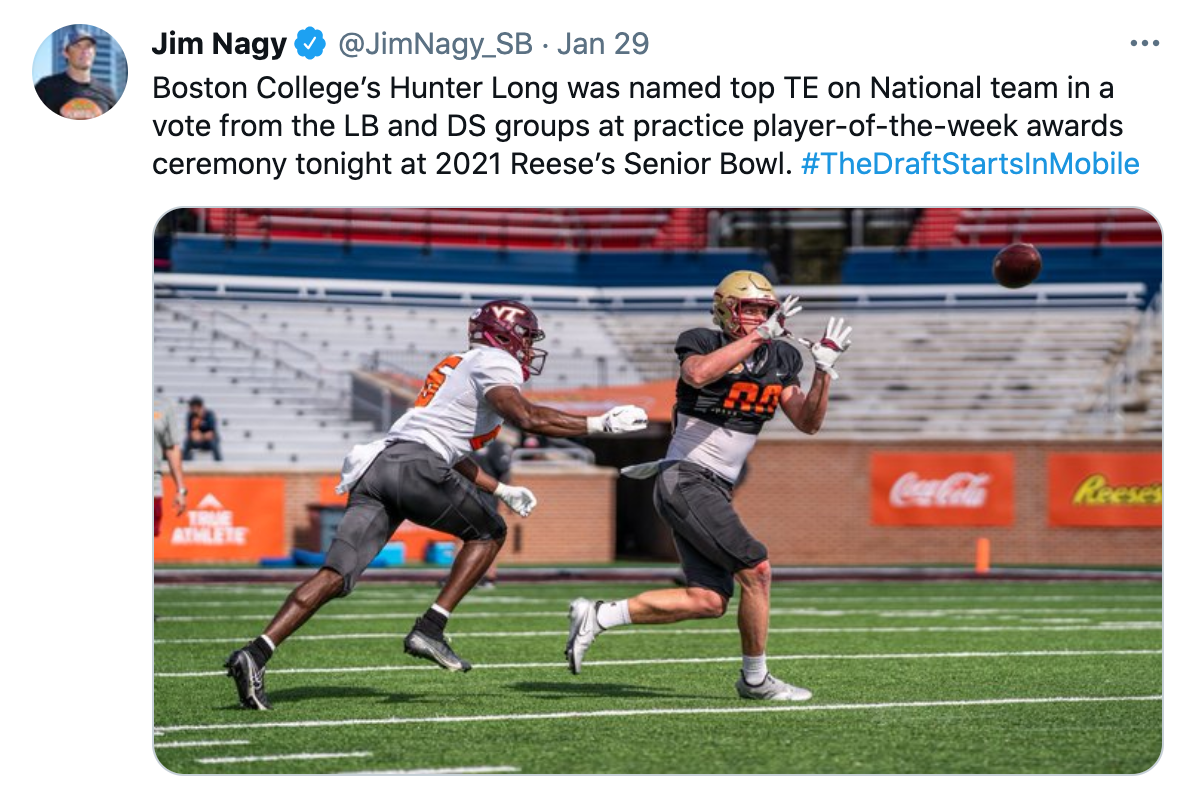 Coming into the 2020 season, it was the Pitts, Pat Freiermuth, and Brevin Jordan show. Long has, at the very least, evened the upside-playing field with that of Freiermuth and Jordan. Best part of the deal, you can wait until very late in rookie drafts to snag this egregiously overlooked talent. 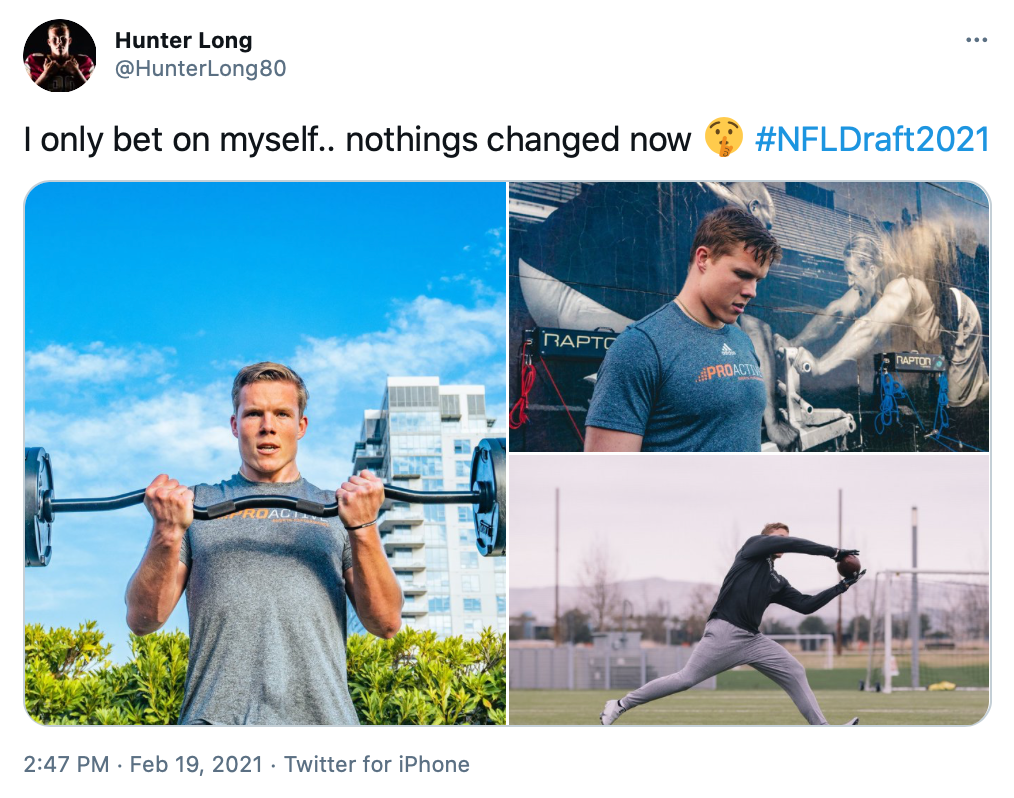