Much has been made about Todd Gurley and his knee since his 2018 season came to a crashing halt—and rightfully so. However the conversation has plateaued. Last preseason, I discussed what Gurley’s condition is, what it means, and how fantasy managers should use the information. One year later, this 2019 article required more grammatical cleanup than it did conceptual updating. Read the full-blown details about Gurley’s condition below and listen to my synopsis here. For the TL;DR crowd, feel free to skip to the action points below this first section.

The knee joint is made of the kneecap (patella), tibia (shin bone), and femur (upper leg). On the ends of both bones, "articular" cartilage exists to lubricate the joint and reduce friction as it moves. Between the joint where the tibia and femur meet there exists a thick layer of connective tissue called the meniscus. The meniscus is there to provide stability within the knee. Think of the meniscus as the brake pads on a car.

What is a degenerative knee?

A “degenerative” knee is a broad term that refers to osteoarthritis (OA) or just arthritis. This is a never-ending process that degrades cartilage and causes pain and swelling with movement. In OA, because of previous joint damage, the body tells the brain to release a cascade of chemicals to the area to set off the first stage of healing. Unwanted debris is cleared away and causes blood vessels to dilate increasing blood flow to the area washing away said debris into the venous system for disposal. Along with this cascade of chemicals comes nociception which is interpreted as pain signals in the brain which worked as an alarm for our ancestors saying “Hey! Stop running! There’s a problem!”. This completed the inflammatory phase and allowed the body to focus on the next two phases. Beautiful, isn’t it? Truly brings a tear to my eye (I have always been an evolutionary biology nerd). Anyway- for 100,000 years the human body’s evolutionary healing process was perfected- until it began to backfire.

His diagnosis is arthritis— not death

A study in 2006 took 205 individuals with OA and asked them to rate their pain from 1-10. An MRI of their knees were then compared against that pain report. They found that “abnormal” finding like cysts, swelling, and bone deformities correlated very poorly with subjective pain reports. In other words, a person who reported almost no pain in daily life could have the gnarliest looking knee MRI and never know it. The opposite is also true. Several different studies in subsequent years have validated this.

Simply put, the perception of a “degenerative knee” is overblown, and what matters are the reports from the patient, in this case, Gurley. Obviously, Gurley and his trainer have admitted the knee is a problem but the larger point is that he has a bad knee… he isn’t dead.

Watch his day to day reports

This condition has no cure and can be extremely unpredictable, especially when adding in several mini car crashes every Sunday. Even people who are not elite athletes report having “good days” and “bad days” when dealing with OA. Expect nothing different for Gurley. Fortunately for him, he has access to the rehab team all year around for maintenance work and pain control. So, keep an eye on the injury report every day and each week in perpetuity to monitor his game-status. He can still contribute for a dynasty team in win-now mode.

Ultimately, Gurley is a player with a wide range of outcomes and a low ceiling that the chronicity of his condition inherently brings. This is because OA can be triggered by anything from slamming the joint into the ground to sleeping in an awkward position. Expect a weekly dance with the injury report or surprise scratches on gameday.

The worst-case scenario is that in Week Two Gurley slams his knee into a 300lb linemen’s helmet leaving the game after scoring 3 points and triggering a 16 week long inflammatory nightmare. Below you’ll notice that Gurley’s ceiling/floor combo was, ahem, undesirable. 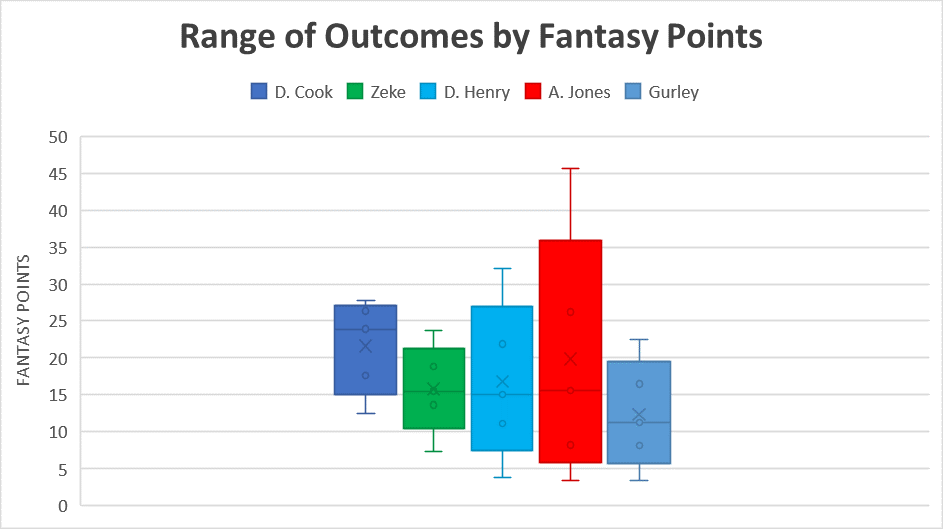 Another worst-case is that his reports are bad all week, you bench him, and he goes off for 98 rushing yards, six catches, 40 receiving yards, and a passing touchdown. Then you end up on the IR yourself after punching through the wall.

Injury analysis is all about, wait for it, laying out a player’s range of outcomes.

Availability does not preclude performance

There are also several indirect factors that exist. For example, his in-game usage was so high in 2018 that he had no choice but to stay in peak aerobic condition. This year the active rest days could take away from that. Another indirect consequence of OA is reduced confidence. Being afraid to plow over a defender or plant hard on a jump-cut could reduce his effectiveness. These are tape grinding takes that I usually do not ascribe to, but make no mistake, it matters for Gurley.

Author’s note: In hindsight, the point above about confidence was painfully obvious in 2019.

Pain is not the only limiting factor

Fancy term alert: Arthrogenic inhibition. If you’re interested, read about it here. This simply means that when the knee joint takes on even minimal swelling, the brain shuts down use of the muscles surrounding the joint. No amount of “toughing it out” can turn this evolutionary mechanism off. In fact, the more that he tries to fight it, the worse the muscle activation can become. Think of this as mother nature’s way of forcing him to rest. Gurley could have minimal pain and still not perform to his potential.

Another point to consider in 2020 is that the presumption is that Atlanta is going to “run him into the ground,” but the contrary makes more sense from a medical perspective. The Falcons have split work to some degree since 2016 and just signed a player with a condition notoriously requiring load-management. Shaving Gurley’s work inside of the 20’s is a perfect way to do just that.

Gurley could be a home run

The best-case scenario is that the Falcons manage Gurley’s work volume perfectly, his body responds well to the daily prehab/rehab, and his clinical signs and symptoms are kept at a minimum allowing for a top 10 RB finish.

In this scenario, he slides into your flex, and he goes off for 98 rush yards, 6 catches, 40 receiving yards, and a passing touchdown, so you celebrate by punching the wall and still end up on the IR yourself

From an injury perspective, Gurley’s condition has not gotten better in a year. Another year of football and being a year older is not a good thing. This is a scenario in which mileage does matter which caps his ceiling and fantasy football is all about upside, right?