What is this article? Mostly it’s a follow-up to yesterday’s big DFS piece – Scott Barrett’s Week 1 DFS Breakdown. But this article should also offer some utility for redraft and dynasty players.

Each week I’ll be breaking down the key injuries, news, and notes from Saturday / Sunday and will be updating this article up until kickoff (1PM EST). And I’ll also be providing a sort of TLDR to yesterday’s big DFS article. Who are my core plays? You can find that at the end of the article. 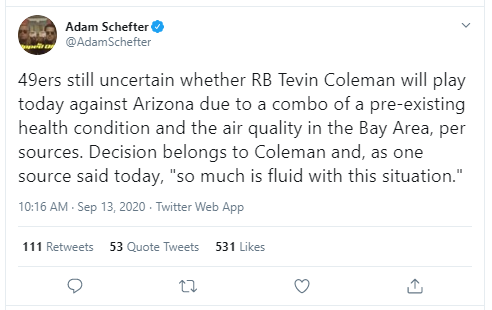 - BREAKING: 49ers RB Tevin Coleman status uncertain. Wow! In a week with a ton of value, we just got yet another mis-priced RB. - BREAKING: Jaguars WR Dede Westbrook is OUT. Good news for D.J. Chark who was a WR we discussed in yesterday’s article. Minshew might be dinged a little bit, but that stack becomes a bit stronger now. Laviska Shenault becomes a bit more intriguing as well. - BREAKING: Bryce Love listed as INACTIVE. Antonio. Gibson. SZN.

- Eagles RB Miles Sanders ruled OUT. Perhaps the most important question in DFS this week is now “Do we eat the Boston Scott chalk?”

- Bears RB David Montgomery expected to play. Per Ian Rapoport, “He should receive his full workload.” You can play him in season-long leagues with tempered expectations, but he and Tarik Cohen shouldn’t be on your DFS radar.

- Eagles WR Jalen Reagor will play. That’s great news, but you’re still not playing him in DFS or redraft leagues.

- Kenny Golladay is OUT. Marvin Jones is chalk. T.J. Hockenson and Danny Amendola are now far more in play.

- Lions CB Jeffrey Okudah is OUT. This slightly boosts Allen Robinson’s projection. He was due to face off against the No. 3-overall pick on about 1/3rd of his routes.

- Chargers WR Mike Williams is likely to play. You’re still not playing him anywhere. This boosts Tyrod Taylor slightly while tempering the target expectations for Keenan Allen and Hunter Henry.

- Giants WR Golden Tate questionable. This boosts target expectations for Evan Engram, Sterling Shepard, and Darius Slayton. The biggest boost would go to Shepard, as he’s a dramatically better player when running routes from his natural position in the slot.

- Broncos WRs Courtland Sutton and KJ Hamler questionable. Might it be possible the Jerry Jeudy show starts immediately in Week 1? Noah Fant also gets a big boost to his target projection.

If you’re not reading Adam Caplan’s Caplan’s Fantasy Insider Notebook, you’re missing out on one of the most-valuable articles in the space. (Seriously, how cool is it that we have our own NFL Insider on staff? What other fantasy sites offer that?) Here’s some important tidbits from today’s article:

- On Miles Sanders: "I’m told he looked really good in practice this week, but the medical staff wanted to give him a little more time for the injury to heal."

- On Jalen Reagor’s health: "Jalen Reagor, I’m told, looked great this week in practice and he doesn’t even have an injury status (not questionable or doubtful) for the game. He has a very small shoulder labrum tear. He’s actually 1-2 weeks ahead of schedule."

As is typical of most Week 1’s, there is an obscene amount of value in DFS this week.

One of the biggest questions of the week is: “Boston Scott or Antonio Gibson?”

Though I think the better question is: “Boston Scott and Antonio Gibson?”

The read I got from Washington beats was just a little bit less than that for Gibson.

Scott is probably the slightly better play on paper, but my inclination is to play both wherever I can.

Tevin Coleman - Tevin Coleman’s status is uncertain for Week 1, due to a pre-existing condition and poor air quality due to the West Coast wildfires. If he sits out Raheem Mostert easily becomes one of the best RB values on the slate, though I do suspect he’ll still be in a committee. Unfortunately we probably won’t know for sure if Coleman will play until that 4PM EST game comes close to kicking off. I don’t see myself having much exposure to him, but he’s a terrific name to keep in mind for late-swaps on floundering lineups. Regrets

- A lot of my plays are shaping up to be extremely extremely chalky. I hate that. I’ve found a way to still roster a lot of the players I like while having a pretty unique lineup. But… Zach Ertz is looking like a solid contrarian play off of DJax chalk. Maybe also Dallas Goedert as I expect Philadelphia to lean 2TE heavy with Jalen Reagor dinged up. Same thing for Aaron Jones and Davante Adams. Steven Sims in the superior CB matchup instead of Terry McLaurin. And Nick Chubb if fading Ravens chalk in large-field tourneys. - Because this week is so chalky, it’s important we try to consider potential slate-busters the rest of the world is overlooking (<5% ownership) and/or sky-high ceilings. Ideally also offering some contrarian value. Todd Gurley, Marlon Mack / Jonathan Taylor, T.Y. Hilton, John Ross, Laviska Shenault, etc.

- In retrospect, I think I was a little too hard on Terry McLaurin. He’s still way too cheap, and actually a pretty compelling contrarian play off of Marvin Jones at a similar price. Darius Slay is good, but maybe not as light’s out as he once was. And I’m confident McLaurin is the type of talent who could overcome it. Though, on paper or owner excluded, Jones is definitely the superior play.

- A little more time should have been spent on Tyler Boyd, Jamison Crowder, and Anthony Miller. Luckily, Wes Huber has us covered here. It’s a little too late to dig deep, but I find it weird how little buzz Stefon Diggs and T.Y. Hilton are getting in choice matchups. Kenyan Drake too. He’s a little mispriced. The matchup isn’t ideal but he’s not being talked about enough and should be able to overcome it on volume. Though air quality in that game is a concern, and I wouldn’t be surprised if his workload gets diminished because of it.

- The inclination for everyone I’ve talked to is just “Pay up for CMC” or “Grab the value in Davante Adams” but… Could Michael Thomas break the slate? I think he could.

For additional plays, please go back and look through yesterday’s article.