Monday’s Championship Showdown slate is sadly the final one of the year for college football.

The College Football Playoff National Championship game (Ohio State vs Alabama) features two top-10 offenses with defenses that are bottom-50 in pass YPG. Both teams are also stout against the run, ranking top 10 in rush YPG allowed and YPC so while both teams have strong rushing attacks it’ll be easier for them to move the ball through the air. With an implied total of 75, this game has shootout written all over it.

In a showdown contest, strategically picking the right players is all about projecting the right game script. As we dive deeper into the numbers, you’ll see that primarily targeting WRs and QBs makes the most sense. Let’s dig in.

Against the Spread Picks

Justin Fields averaged an absurd 33 FPG this year as both a dynamic passer and runner for Ohio State. How great has Justin Fields been? In his seven games, he has scored 30-plus FPs six times and 40-plus FPs three. He saved his best game for last versus Clemson with 45.6 FPs despite getting injured.

Overall, Alabama has been tough versus opposing QBs only allowing 16.3 FPG. However, they are ranked 79th in pass DEF giving up 242 YPG. Alabama has been especially vulnerable versus good QBs giving up 330+ pass YPG to Kyle Trask, Matt Corral and Kellen Mond. There is no question that Justin Fields is better than all of them. Given his incredibly high ceiling, Fields should be in consideration for the Captain/MVP slot.

Mac Jones had an incredible year posting 25-plus FPs in 9-of-12 games this year. His passing numbers are absurd, throwing for 336 pass YPG and 36 TDs while completing 77 percent of his passes. Ohio State doesn’t have many weaknesses, but their pass DEF is one of them.

The Buckeyes ranked 85th versus opposing QBs allowing 22 FPG and 281 pass YPG. While I don’t think I’d put him in the Captain/MVP spot, I do think he could be worth stacking in your lineup if you’re all-in on the Alabama passing game.

Trey Sermon has been absurd the last two weeks averaging 45 FPG. Over that two-game stretch, he has 60 carries, 524 and 3 TDs while hauling 7 receptions for 65 yards. Part of what led to this uptick in production was an injury to Master Teague III versus Northwestern in the Big 10 Championship game. While it appears Teague III might be back, Miyan Williams did not make the trip to Miami for the title game.

Trey Sermon will receive another heavy workload in this game. However, Alabama has been tough versus the run all year only giving up 110 rush YPG and 3.2 YPC. At best, Alabama will slow down the top-5 Ohio State rushing attack, but they will not shut it down. The only question for me is whether Sermon will hit value at his expensive price points.

Najee Harris is flat out unstoppable averaging 32.4 FPG. His lowest scoring output of the year is 17.8 FPs in a blowout win versus Arkansas. There were four Alabama games decided by 17 points or less. In those four games, Harris averaged 42.75 FPG. When things get tight for Alabama, they lean on Najee Harris and Devonta Smith (more on that later).

As the 8-point favorites, Alabama might decide to rely on Harris to slow the game down if the defense is having a hard time stopping the Ohio State offense. All the numbers say this will be a shootout so if you want a contrarian Captain/MVP play Najee Harris is your guy.

I mentioned above that Alabama leans on Najee Harris and Devonta Smith when games are tight. In the four games decided by 17 points or less, Smith is averaging 44.35 FPG. His lowest scoring output in those four games is 40.5 FPs. That is absolutely insane. You can see why he is the first WR to win the Heisman since Desmond Howard. If there is a weakness in this game, it is the Ohio State pass DEF.

The Buckeyes are ranked 118th allowing 281 pass YPG. Versus opposing WRs, they are ranked 113th allowing 45.6 FPG. Last week, Cornell Powell torched the Ohio State DEF, mainly Shaun Wade, with 8 receptions for 139 yards and 2 TDs on 12 targets. Devonta Smith is going to have a huge game. As much as I have mentioned other players for the Captain/MVP slot, it would be silly to pivot off Devonta Smith in your main lineup regardless of cost.

After missing the Big 10 Championship game, Chris Olave had a massive game versus Clemson with 6 receptions for 132 yards and 2 TDs on 8 targets. It was fun to see him have redemption versus Clemson after his costly mistake of running the wrong route at the end of the game last year. Averaging 27.2 FPG this year, his scoring output has been incredible especially given that he has been relatively inexpensive all year.

However, his performance versus Clemson might have priced him out as a viable option in this slate. Unless you punt both QBs, you cannot afford Olave and Devonta Smith in this slate. My typical strategy with Olave and Garrett Wilson is to choose the WR that is more affordable.

Garrett Wilson and Chris Olave have almost identical stat lines this year with both over 50 targets, 40 receptions and 5 TDs. I expect Patrick Surtain II to start out on Chris Olave considering his last game and the fact that he is primarily an outside WR while Wilson lines up in the slot quite a bit.

I mentioned before that I typically choose the cheaper of Wilson and Olave. This slate Wilson is $1.8K cheaper on DK allowing us to have him in a lineup with Devonta Smith and Justin Fields. For that reason, I’d prefer Garrett Wilson over Chris Olave.

One of the choices you will probably have to make in this slate is whether to play JK Billingsley, John Metchie or Jeremy Ruckert. While all three are totally viable options in this price range, I prefer Billingsley. However, if I knew Jaylen Waddle was not going to play or that he was simply going to be a decoy, then I’d go with Metchie due to upside. According to Nick Saban, that will be a game-time decision. 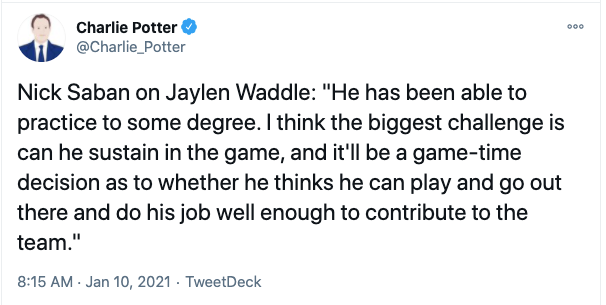 Over the last 5 games, Billingsley has scored double-digit FPs in four of them. In the last game versus Notre Dame, the play Billingsley scored on was specifically designed to go to him in the red zone. While Ohio State will game plan to stop Najee Harris and Devonta Smith, Billingsley will have one-on-one opportunities to take advantage of the size-speed matchup he creates.

In addition to that, touchdowns are important in showdown contests as typically they make the difference when the scoring is so close. Billingsley has scored a TD in 3 of Alabama’s last 4 games. Over that same span, Metchie has zero TDs. Ruckert is the other option here with 12.6-plus FPs in three games, but 1.6 FPs or less in his other three. His inconsistency at his $4.8K salary makes me hesitate. All that being said, Billingsley is the choice for me.

Josh Chevalier started playing CFB DFS when it was introduced on DK in 2015. Since its return to DK in 2018, he has provided in-depth weekly articles & analysis specializing in Cash/SE contests. Follow Josh on Twitter: @CFFguys