Week 8?!? Come on. It's time to really start making that playoff push in fantasy leagues. Even if you're 2-5 at this point, there's still hope.

It's hard to resist the temptation to open boxes of cards. It's exhilarating opening a pack and not knowing what could possibly be inside, that next card could be something amazing. But let me tell you from experience, it's a losing proposition more times than not. Essentially unopened packs are like lottery tickets, and I think we know how those usually turn out.

If you do find yourself opening packs and boxes, one thing I cannot stress enough is sleeve all rookies. They may be "nobody" today and have minimal value you never know when they'll emerge. One thing you'll quickly learn if you haven't already, is condition is VERY important with cards. So you want to make sure your cards are pristine if/when that emergence happens. All 3 of this week’s cards in "Who's Hot" were far from the top RC's when the set released.

Reminder: We love StarStock.com vault of over 250,000 cards. If you want just one resource for options, purchasing, and organization, they’re the site to check out. Images and stock prices courtesy StarStock. 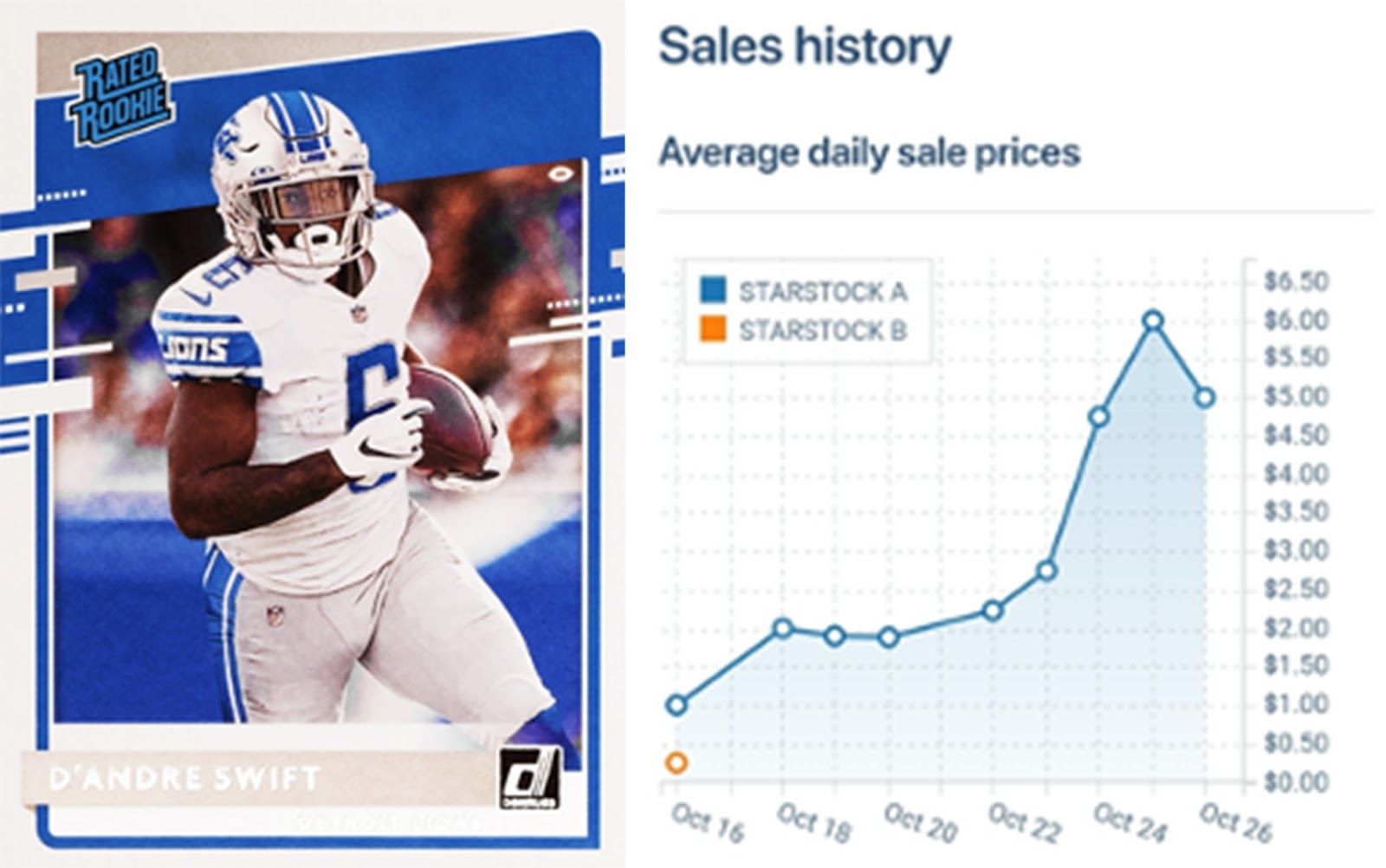 Things are finally starting to get a little bit clearer in the Detroit backfield. Over the last 2 weeks, Swift has gotten 23 carries tallying 143 yards and 3 TDs, and caught 7 passes for 28 yards. Swift is starting to emerge in the Lions backfield and the hobby is clearly noticing. Since Donruss released his prices are up 500%. If he continues to perform the way he's been, his Prizm will be a double-digit card out of the gate.

Higgins had a promising 2018 season, with 39 catches for 572 yards and four touchdowns in 13 games. However, he was pretty much buried once Odell Beckham Jr. came to town. But now, unfortunately for Beckham owners in fantasy, Beckham is out of the way. 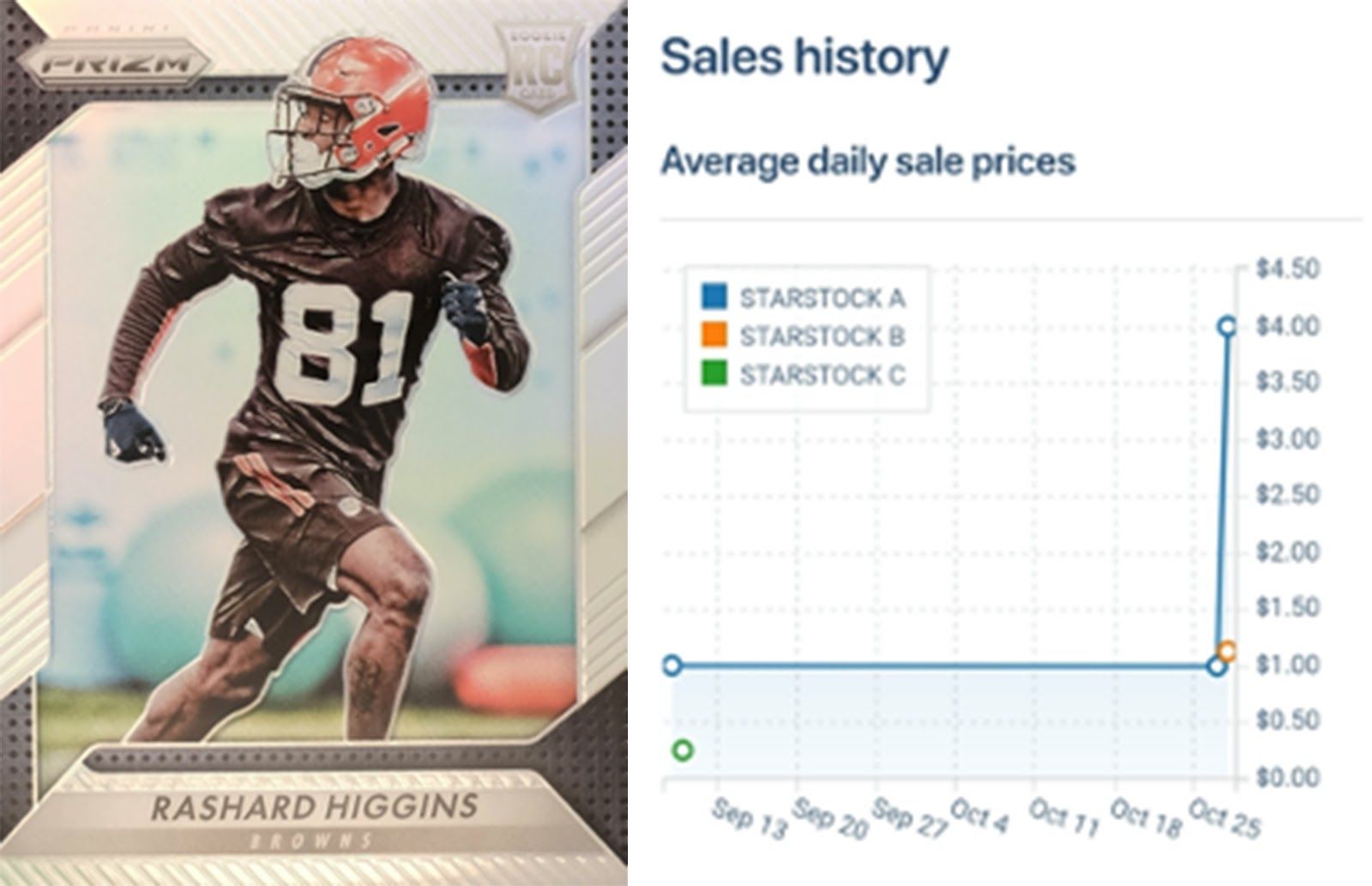 To me, Higgins’ sales tell me the hobby and fantasy are clearly starting to merge. Just like in fantasy, after the injury to Beckham people were rushing out to buy Higgins. His prices spiked 400% once news came out Beckham was out for the year.

What an absolutely brutal hit to Andy Dalton. The Cowboys are not having the best of luck this year, that's for certain. Shortly after the game, I went to StarStock and bought some DiNucci. I knew nothing about him, had to look up spelling his name, but yet there I was buying his cards. That's the state of the hobby. I still certainly hope Dalton is able to recover and we see him back under center soon. 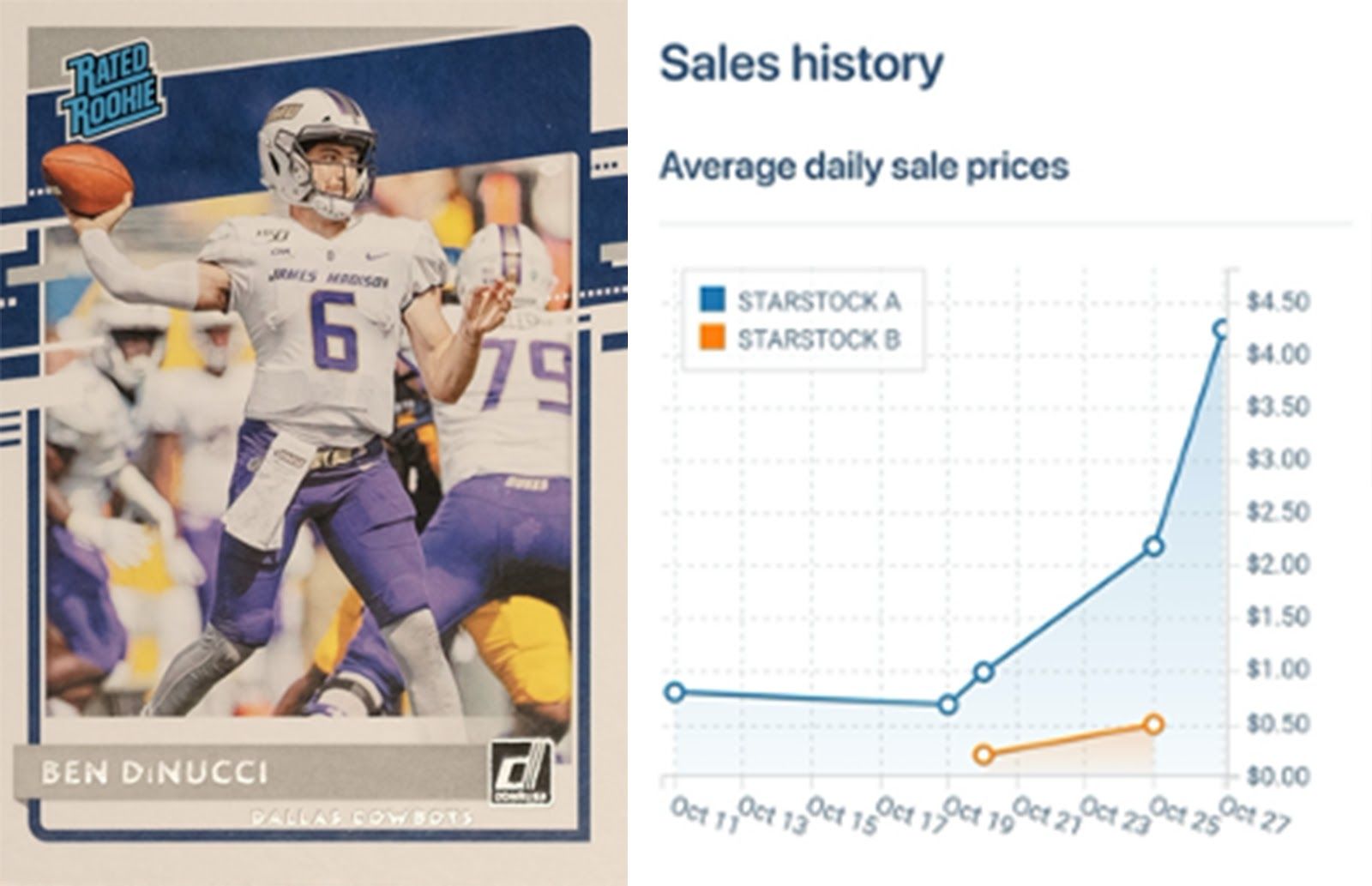 Surprisingly, I was able to sell a few after the game for a 300% profit. But if you had bought prior to the injury you could have seen profits as high as 700%. There's a chance he starts this week again against the Eagles. I'm not so sure he's enough to carry a historically bad Cowboys defense to a win. But in the event he does, those margins can see a serious increase. I think it's possible that if he plays well, he could take the job. A lot of if's, but I'd say it's in the realm of possibilities. 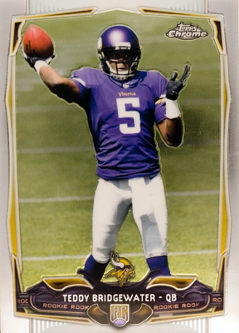 You can buy these for under $5, in "A" grade, on StarStock. That's crazy to me. If the Panthers can get a win Thursday night, they will be at .500. Plus there is the possibility he puts up a good performance against a very beatable Atlanta Falcons defense. If that happens, with his prices being as low as they are, his prices can see an immediate increase.

While many want to label Alex Smith comeback player of the year after returning to the field earlier this year, I don't think we can ignore the fact that Bridgewater is also very deserving of the award.

Deebo had an impressive rookie year with 57 receptions for 802 yards and a TD. Then he broke his foot in the offseason. The 49ers eased him back into the game relatively slowly, but in the last 2 weeks, he's caught all 11 of his targets for 131 yards and a TD. It's clear between last year and the small sample size this year that when he's fully healthy, he's a big part of the 49ers defense.

He did tweak his hamstring in Week 7, and unlikely won't play in Week 8 so his cards don't have a possibility to see an immediate rise in value. But with all the injuries to him lately, his prices are low, so I think now is a great buying opportunity. He might be someone you want to hold onto for longer than just a few weeks.

This isn't the first time Watson has made the list. It's hard to deny he's a great talent, but currently, the Texans are a disaster. Finally getting rid of Bill O'Brien hopefully is a step in the right direction. I think at this point it will take a lot for Watson to rise in value, but for the future, his prices are cheap to me.

Chris Carson is a free agent after this year and Hyde only signed a one year deal. If neither one of them sign a new deal with the Seahawks, Homer can see a much bigger workload next year. We already know Penny has trouble staying on the field, so Homer has a chance to become the starter, at least for a few games. He has been getting a little work in every game, so the Seahawks are trying to see what they have with him. He's averaging 3.9 yards a carry, which isn't a huge number, but it's more than Carlos Hyde currently has and it's on 3 carries a game.

Carlos Hyde (a tight hamstring) and Chris Carson (foot sprain) both were banged up Sunday night against the Cardinals. Homer also left the game with a knee contusion, but Pete Carroll said it wasn't serious. There's a chance we'll get to see more of Homer this week, likely alongside DeeJay Dallas, but it's going to be against a tough 49ers run defense. This is one to buy, throw it in a box, and forget you have it for a year or two

Each box of XR contains 2 packs, with 7 cards per pack. Each box contains, on average: 2 Autographs (1 Auto and 1 Rookie Auto Jersey), 1 Memorabilia Card, 4 Base, 4 Parallels, 2 Rookies and 1 Insert. Boxes are selling for around $210.

History shows the XR set doesn't hold it's value. Not a box I'd necessarily recommend investing in or really breaking at the current price point.

Each box of Trinity contains 5 cards and all are Autographs. Every card comes already in a penny sleeve and top loader. Boxes are selling for around $175.

I'm not a big fan of Leaf products. They are in College uniform and singles generally don't sell well on the secondary market. With that said, Trinity is a set Leaf knocks out of the park every year. The patches on the relic cards are second to none. Again the secondary value isn't there, but this set is a fun break.

Each box has 12 packs and 5 cards per pack. Every box contains, on average: 2 Autographs, 1 Memorabilia Card, 9 Inserts, 12 Parallels, and 12 Rookies. Boxes are selling for around $225.

Phoenix is similar to XR. Not a product I'd necessarily recommend opening. In the event you do, sell as quickly as possible.