It’s like clockwork: Alvin Kamara lines up next to Drew Brees in the backfield. He catches a wheel route and after shaking off a defender and manages to stay in-bounds using his signature mind-blowing balance, and he’s off to the races.

Unfortunately there weren’t as many moments like this in the second half of 2019. I can explain.

Overall, Kamara has had a relatively healthy career. Since 2012 he’s had two knee injuries, but there’s no reason to believe based on his track record that those will catch up to the 24-year-old in 2020. The single documented concussion Kamara has dealt with occurred in 2017, and although concussions are wildcard injuries, the time between one concussion and the other helps reduce severity and recurrence. In the week leading up to the Jacksonville game, Kamara reportedly picked up a high-ankle sprain at practice and was a game-time decision. Then, during the game, he reportedly sprained his MCL (for a full explanation of these injuries check out my article on MCL sprains and high ankle sprains).

What you need to know about these two injuries is that they both typically result in an average of two or three missed games for NFL players… when they occur in isolation. Kamara had a high-ankle sprain and an MCL sprain simultaneously. The fact that he came back after the bye in only three calendar weeks is insane from a recovery standpoint. The nail in the coffin for high-ankle sprains is that even though they result in just 2-3 missed games, a survey of all 32 NFL team doctors agreed that players usually aren’t at peak health until four weeks after the injury.

As a running back, the ability to stop on a dime and sprint away from contact is crucial. Well, that’s nearly impossible to do with a painful MCL. With every hard plant and cut the MCL is put on tension while preventing the knee from caving in, and with a sprain, this becomes extremely painful. If Kamara did manage to evade contact with a cut, pushing off of his foot was another obstacle to overcome because the high-ankle ligament is splayed and overstretched anytime the ankle is plated and flexed, just as it is when a player is preparing to propel himself forward. Long story short, Kamara’s injuries were no joke and clearly affected his ability to do his job. 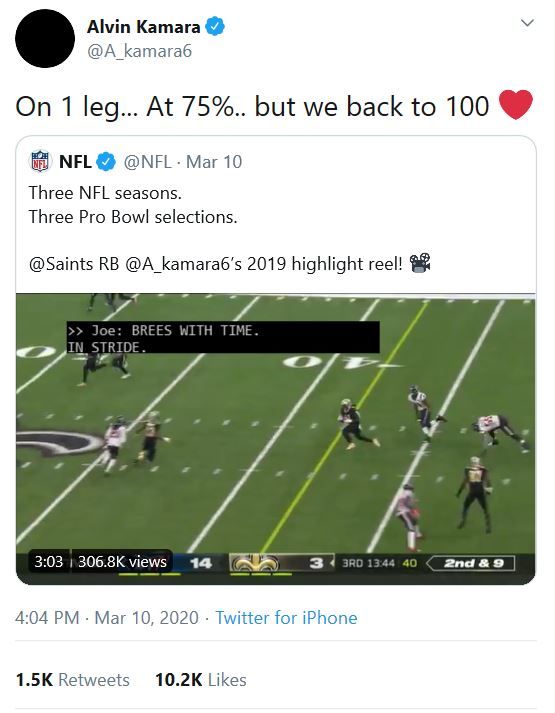 By now, I hope it’s obvious that in 2019 Kamara finished as the ninth-ranked fantasy running back in spite of his health. It’s also critical to understand that although he only played 14 total games due to injury, he still averaged nearly 18 FPG. In order further clarify exactly how much the injury affected him, look no further than the basic metrics:

Weeks One through Six

So, his snaps and yards created took a big hit despite the competition getting easier. Still not convinced? Consider this nugget from the multi-talented, Yards Created creator himself, Graham Barfield 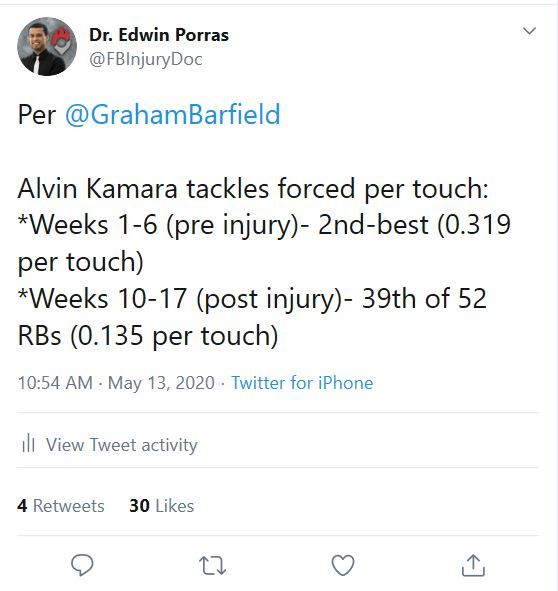 Kamara went from 2nd in tackles-forced-per-touch before the injury and 39th out of 52 qualified running backs after the surgery. What other evidence is needed to be all over Kamara in 2020?

To summarize, Kamara will be healthy in 2020, the offense is still humming, and he is ranked third among running backs in the Fantasy Points consensus rankings. Smash the draft button and take him at the discount while you can.