Reminder! Get a free month of Fantasy Points PGA content and up to $100 in bonus cash when signing up to Underdog Fantasy using promo code FANTASYPGA 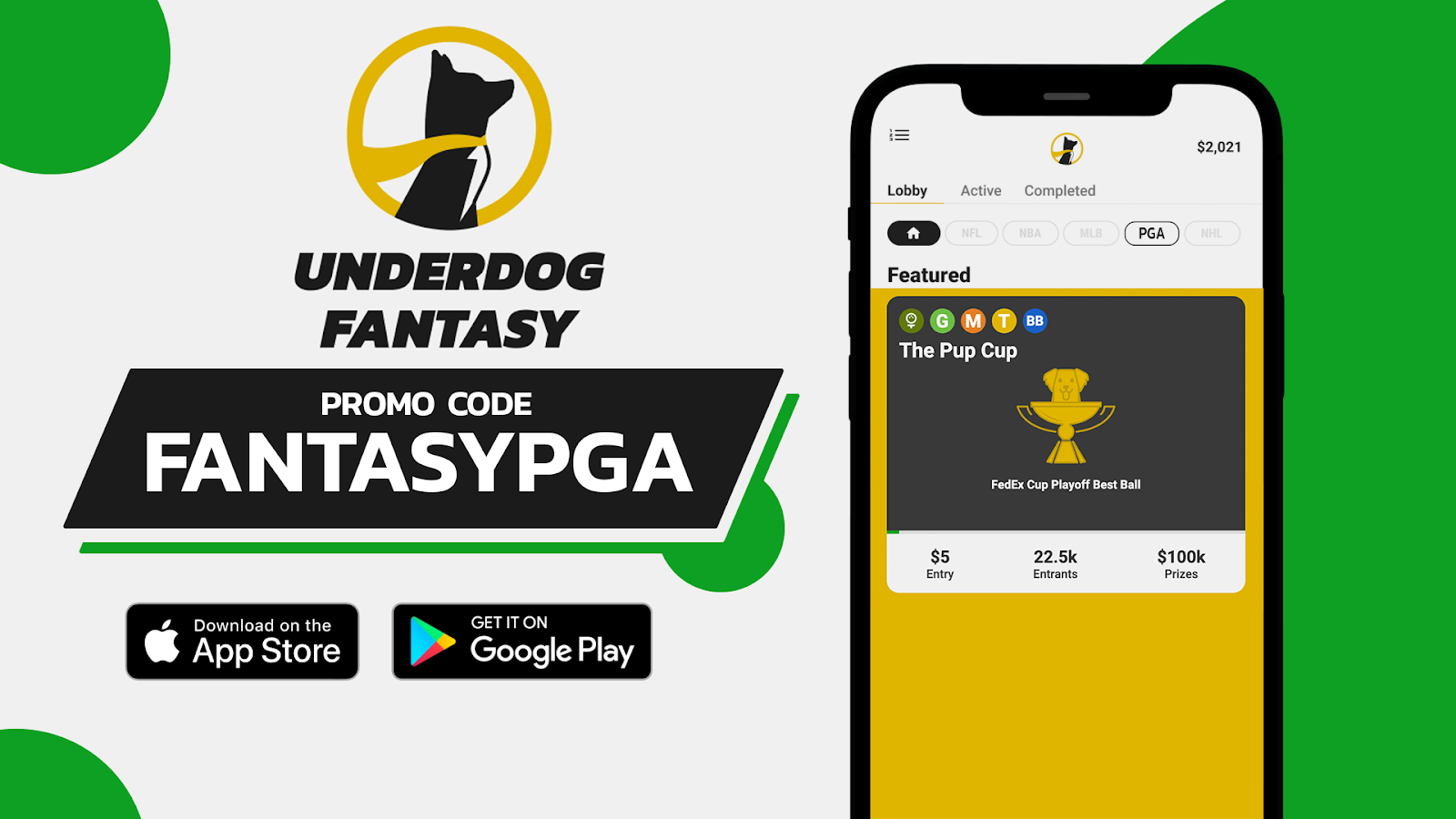 Underdog Fantasy has created a really cool postseason draft-style postseason tournament for the PGA FedEx Cup. It’s called the Pup Cup and you can start drafting right now for $5 per entry. Each league has six participants who draft 10 PGA tour golfers. It is best-ball style where six of your ten golfers are submitted automatically based on best score. Golfers accrue points similar to other daily fantasy contests. They receive points for pars, birdies, eagles, and albatrosses, while losing points for bogey or worse. They can also grab some bonus points for bogey-free rounds or birdie streaks.

If you are unfamiliar with the FedEx Cup Playoffs, it’s a pretty simple format. At the end of the PGA Tour regular season there are three playoff events. This year the first even will be played at TPC Southwind, home of the FedEx St. Jude Classic. The field will feature the top 125 golfers in the FedEx Cup Standings. The top 70 in points standings advance to the BMW Championship which will be hosted at the Wilmington Country Club this year. The top 30 in points after the BMW advance to the Tour Championship at East Lake. At the TOUR Championship, players are assigned starting strokes based on their rank in the standings with first place starting with a score of -10, second place starting at -8, third place starting at -7, and so on. This will not having any bearing on the outcome of this

We can attack this tournament from multiple angles. We can just play one or a few lineups. In that case, I would say identify your favorite golfers (which I will help you do in this article) and aim to draft those guys whenever you can. The other strategy is to mass multi-enter with many lineups, somewhere between 50 and 150. The max entries for this tournament is 150 lineups. In that case, we still want to identify our favorite golfers, but we also want to create a portfolio of players and track our percentages. As much as I love Collin Morikawa, I want to spread exposure to different players in that first and second round so that one guy doesn’t crush my chances by drafting him on every team.

The obvious question now becomes, “How impactful should the current FedEx Cup standings be on my draft strategy?” To that I would say, “very.”

There are going to be 60 golfers drafted in each league (6 teams, 10 golfers). Obviously, players who have been successful for much of the season and have landed at the top of the standings to this point should be your priority. It’s likely they can still make the TOUR Championship without having to finish very high in the preceding events. Once we get outside the top 30 or 40, we can start taking a run at players that we believe can win at St. Jude to potentially vault them into the top 30.

Here are a few stats on how the Tour Championship has played out over the last 15 seasons.

Top of the Board

Those at the top of the FedEx Cup standings will almost undoubtedly qualify for all three events. They may get jumped by a couple of players who finish high on the leaderboard in the first two events, but it’s unlikely they fall out of the top 30. Therefore, it’s prudent that we target players at the top of the standings in the first two rounds of the draft. Since it’s likely that these players advance to the final event, I used the statistical model to identify who from the top of the board fits East Lake the best.

East Lake is a fairly long par 70 that requires players to be accurate off the tee and set their second shots up with placement. Obviously players must be accurate on approach. There are a plethora of long approaches from 175+ that are weighted in the model as well. The greens are lightning fast bermuda. Course history, form, and most common hole yardages were also taken into account. In the stat model I used strokes gained approach, opportunities gained, good drives gained, Par 70 scoring, form, course history, Par 4: 450-500, Proximity from 175-200 and 200+, and fast bermuda putting.

It’s important to remember that players will be given starting strokes, which is an advantage for those closer to the top of the standings. Below is a chart that compares current FedEx Cup Rank (before Wyndham Championship) with my model rank, and the ADP.

I wouldn’t write any of the Top 30 off, but there are some notable players that I like to draft based on their current place in the standings, model ranking, and average draft position. Below are the players who stand out. In parenthesis is the difference in their standings/model average and their current ADP:

The way I would attack the draft is to target players who are currently playing and who also fit Southwind relatively well. I think you should prioritize players higher in the standings, but you can take one or two fliers outside the top 60 or so that you think can get into the final event with two strong showings. The problem with the second event, the BMW Championship at Wilmington CC in Delaware, is that the course is a relative unknown. So I think it’s best to target course fits for Southwind from outside the Top 30.

TPC Southwind is a course that requires some accuracy off the tee as there is a lot of trouble lurking. Good drives gained will be a key stat. In addition to solid off the tee play, the most common approach distances are 150-175 and 175-200. One-third of the holes on the course measure 450-500 in length as well. Historically Par 5 scoring has been the most important and there are only two par 5s, so you have to score when you have the chance. Par 3 scoring is more important at Southwind than it is at other courses also. It’s almost neck and neck with Par 4 and 5 scoring which we don’t often see. As always, approach, opportunities gained, and current form remain an essential part of the statistical model.

Here are my favorite players to target outside the Top 30. With strong performances at the first two events that can make their way into the Top 30 and get to the final event at East lake. The picks are made based on course fit and current form. The number in parenthesis is their current FedEx Cup rank at the time of this writing.

Aaron Wise (34) — Wise has had a tremendous season and sits just outside the East Lake cutline. He is second from the Par 4 hole distances, 13th in current form, and doesn’t rate out any worse than 45th (out of all PGA players not just the FedEx Field) in eight of the nine categories.

Corey Conners (35) — Rates out sixth overall in the Southwind model thanks to being first in good drives gained, third in opportunities gained, and ninth in overall form. He’s also 12th in the 175-200 yard proximity range. A high finish in the first playoff event could cement his place at the finale in East Lake.

Mito Pereira (36) — Mito has a great overall season, but has drifted a bit coming down the stretch. He still rates out top 20 in approach and top ten in 450-500 yard Par 4s and opportunities gained. He’s very accurate off the tee which will be important in the first playoff event.

Russell Henley (42) — Henley makes a lot of sense for a high finish at St. Jude. He rates out fifth overall in the model with two number one rankings in approach and 150-175 proximity. He also has top 5s in opportunities gained and good drives gained. He looked backed to himself at the Rocket Mortgage, so I think he’s a really nice bet to sneak into the top 30 by the time East Lake rolls around.

Chez Reavie (51) — Reavie is coming off a recent win and also rates out well in some key stat areas such as good drives gained (3rd), opportunities gained (11th), approach (12th), 150-175 proximity (13th). Chez has some momentum heading into the playoffs and he gets a course that feets his game somewhat well in the first event. I like targeting him in the last few rounds.

Harold Varner (58) — Harold Varner is a really solid pick from 50-60 range as he rates out 7th overall for St. Jude and the final event of the season is in his backyard at Sedgefield. I could see Varner being inside the top 30 after the Wyndham Championship and the FedEx St. Jude. He is ninth in approach, 12th in opportunities gained, and 21st in form. He also rates out well from the proximity ranges.

Brendan Steele (57) — Steele has three top 25s in his last four starts while also rating out well in good drives gained, Par 4: 450-500, and 175-200 proximity. What jumps off the page for me is that Steele has competed in stacked fields which the playoff events will be. He finished 9th at the PGA Championship and 10th at the Memorial in the middle of the season.

Daniel Berger (79) — Obviously we have to monitor Berger’s injury and he’s decision to even participate in the playoffs this year, but he’s a slam dunk last pick if he does. It’s a decent gamble to have him as a last pick. He rates out second overall at Southwind and has won multiple times here. He rates out top ten in approach, par 5 scoring, good drives gained, and Par 3 scoring. Though the stats being pulled are from when he was healthy over two months ago, if he’s gearing up for a return it could be a great upside pick.

The key to winning this tournament is going to be getting the most golfers to East Lake as possible, while also having those same golfers perform well throughout the three events. The best way to go about that is to target players at the top of the FedEx standings early in the draft because they are very likely to advance to the TOUR Championship. From there, target the players you think can finish high enough at the first two events to sneak into the Top 30 and make their way to East Lake. I am going to stick pretty tightly to my model rankings at the top of the board, with some emphasis on the players listed above that are below their FedEx/Model ranking.

Pat began playing fantasy football 20 years ago. In 2012 he started the fantasy football site FantasyCouncil.com which opened the door for him to become a DFS contributor at several sites and is the newest DFS Contributor for Fantasy Points.